The 80 Plus Platinum certification has a proven efficiency of over 90% and is the second best efficiency you can get from a power supply. This means that PCs with such a power supply make better use of energy and save on the electricity bill in the long run compared to less efficient power supplies. Which translates into long-term savings in energy consumption that ends up paying for the power supply itself. More if it is as well built as EVGA P6 Supernova is, which is designed to last a whole decade and therefore be the power source for a multitude of configurations that you are going to do with your PC during all this time.

We are facing a fully modular EVGA power supply, which is 80 PLUS Platinum certified, so as we have already mentioned it has an efficiency of 90% or higher. EVGA claims it is 92% under 115V AC or 94% under 220-240V AC, so its actual performance is above that of said certification.

Another detail to highlight of the EVGA P6 Supernova is its size, since it is the shorter length power supply rated at 1000W that EVGA has released to date. Since its measurements are 86 mm high by 150 mm wide and 140 mm long. So this allows for additional space on the PC. 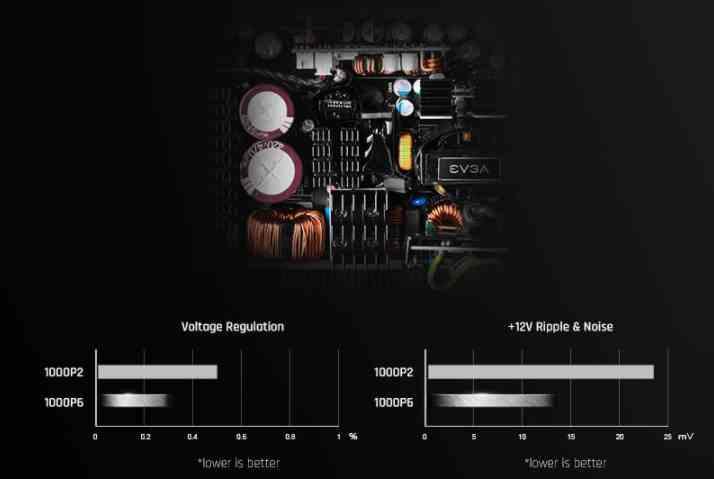 The third point to highlight is the better capacity that the EVGA P6 Supernova has of regulate the voltage compared to the EVGA P2 of the same brand. Which is key to guaranteeing the ten-year warranty that is offered with the power supply. All this combined with the EVGA firmware that as a security system turns off the power supply if it is more than 1 millisecond receiving a load of more than 125%.

And speaking of protection systems, the EVGA P6 Supernova obviously contains all the protections and security mechanisms that all high-end power supplies have. Namely, protection against excess current and voltage, loss of current, short circuits and high temperatures. All this through a combination of hardware and firmware built into the power supply itself. All this without forgetting the use of high-capacity Japanese capacitors throughout the circuit.

To finish off the features, we can’t forget about the built-in fan to cool this powerful power supply. Which is totally silent with loads of up to 40%, but reaches 20 dBA between 40% and 70% of the load, and then goes back up to 35 dBA when the load is at 100%. So in working conditions where the PC does not have to do a lot of processing and does not require the power supply to be at maximum. What the EVGA P6 Supernova does is totally silent most of the time

Compatibility and connectivity of this power supply 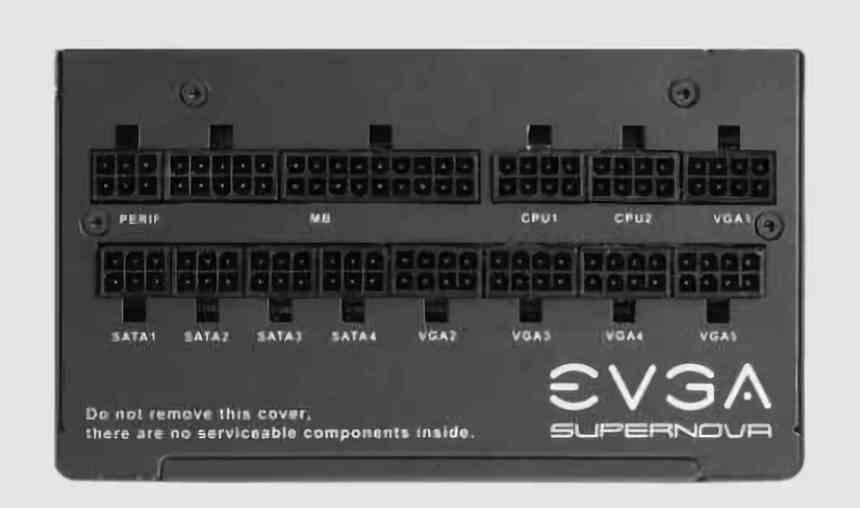 What interests us about any modular power supply is its connectivity and the EVGA P6 Supernova does not fall short, we have to start one 24-pin ATX connector, followed by an EPS connector for the 8-pin CPU in a 4 + 4 configuration. As for food for the PCI Express ports we have 8 of them with a 6 + 2 pin configuration, 12 SATA power ports, 4 four-pin peripheral ports, and a floppy drive connector.

As for the cables included as standard in the EVGA P6 Supernova this comes as standard we have the following cables: a c600mm ATX able, a 700mm EPS cable, five 700 mm cables for PCIe and another for the same connector 820 mm. If we already talk about SATA connectors the source comes with 4 550 mm connectors, one 650 mm, one 750 mm and the other 850 mm. And to finish we have the AC power cord which is 1500mm. Each and every one of them is not connected as standard in the power supply as it is fully modular, which allows you to use only the cables you need at any given time.

Not everyone needs a power supply with a power of 1000 W in their PC, that is why the EVGA P6 Supernova come in lower power models, but with all the specifications and features that we have mentioned about the 1000 W model. Specifically, the other three models have a power of 850 W, 750 W and 650 W.

The other models, despite their lower power, maintain the ten-year warranty and the 80 PLUS Platinum certification of the 1000 W version, which makes them ideal as power supplies for much more modest PCs. 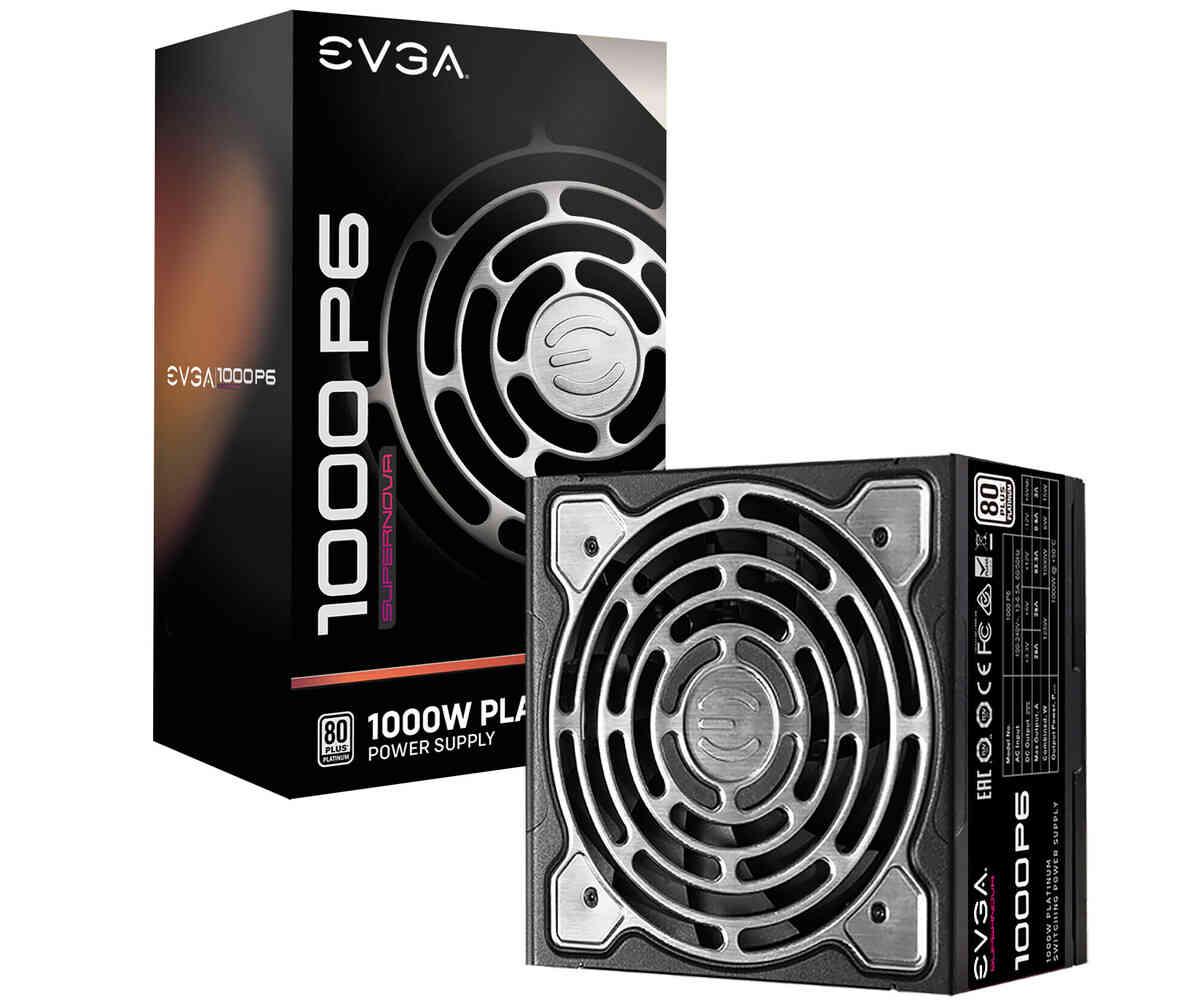 The EVGA P6 Supernova with a power of 1000 W is already available on the EVGA website with a price of 299 US dollars, as for the rest of the models in the range, for the moment we do not know the price, but obviously it should be much more lower than the 1000W model.

Of course, EVGA limits the number of units to 2 per shipping address. The reason for this is very clear, energy efficiency is very important for mining and EVGA is not interested in selling its power supplies for mining farms. So if you are thinking of buying a power supply with the ability to withstand the different configurations of your desktop PC in several years, it is an excellent option.

So you can download NVIDIA beta drivers, but should you?

Use twice the space in Dropbox with this trick