Google Docs is one of the most popular word processors and therefore one of the main alternatives to the ubiquitous Microsoft Office Word. Compared to its rival, it stands out for being totally focused on the cloud, being a nuclear part of ChromeOS. Consequently, to get the most out of it from another desktop system, it would be convenient to use Chrome or at least a web browser based on Chromium (Edge, Brave, Vivaldi, Opera… ).

Compared to most of its rivals, Google Docs stands out for providing a classic interface inspired by the old versions of Microsoft Office up to 2003, but with a simplistic twist. This makes it a simple and easy-to-use application, a feature that, together with the quality offered by Google services, makes it ideal for writing or documenting while on the go.

In other words, and in case it wasn’t clear, Google Docs is one of the best options if you are looking for a simple word processor that synchronizes quickly and correctly. Due to the fact that the vast majority of people have an Android smartphone, coupled with the great popularity of services such as the search engine, Gmail and YouTube, it is highly likely that the user has a Google account, so it has the processor of texts that we are dealing with practically in the palm of your hand (and we are not referring to the official applications for Android and iOS smartphones).

But despite its simple appearance and being tied to the ecosystem of the Mountain View giant, Google Docs supports extensions that expand its possibilities, so we are going to take the opportunity to mention five that allow transforming this word processor into a more powerful solution .

How to add extensions to Google Docs

Before getting into the flour, we are going to briefly explain how to access the catalog of extensions available for Google Docs, which is as simple as click on the plus button (+) that one is in the right panelwhere the user can see by default the extensions of Calendar (obviously the Google one), Keep, Task, Contacts and Maps. 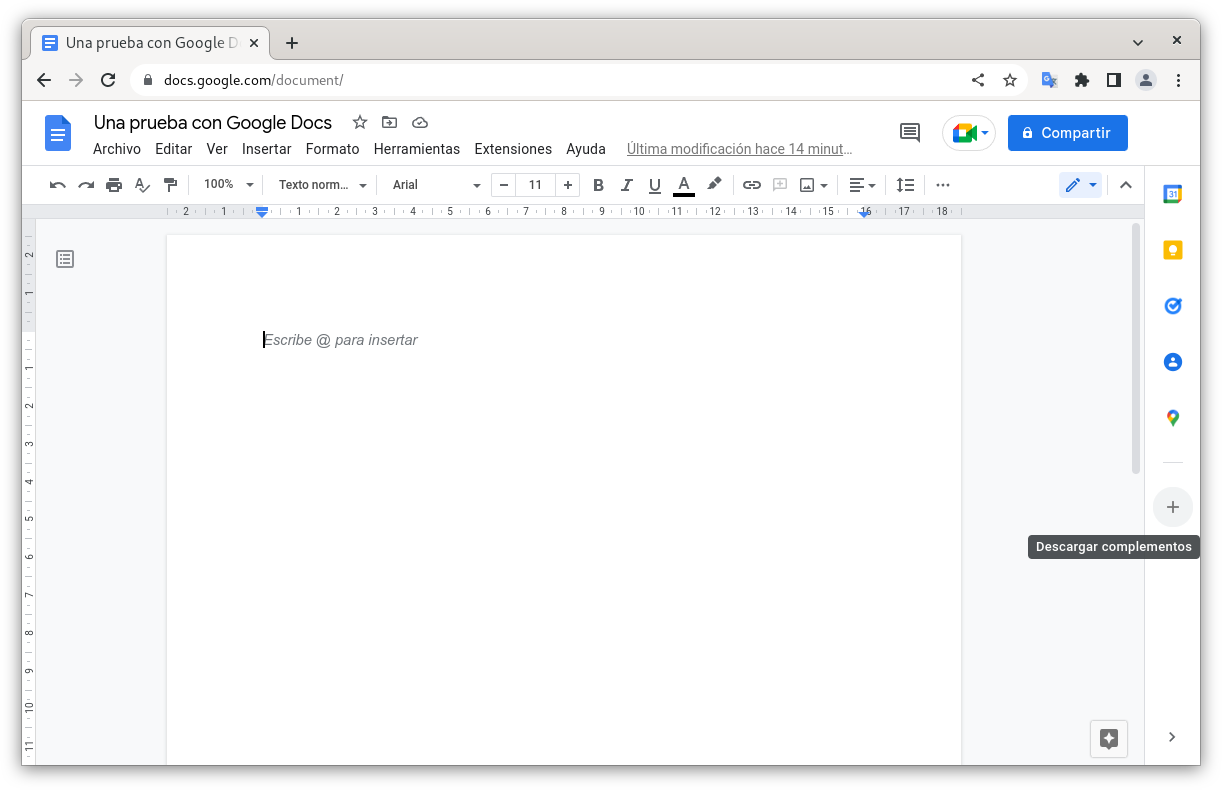 After clicking on the plus (+) button, the user has to perform extension search you want to install, left-click on the desired result and click on the “Install” buttonwhich before continuing with the installation process may ask for permissions to be granted through the selection of the Google account. 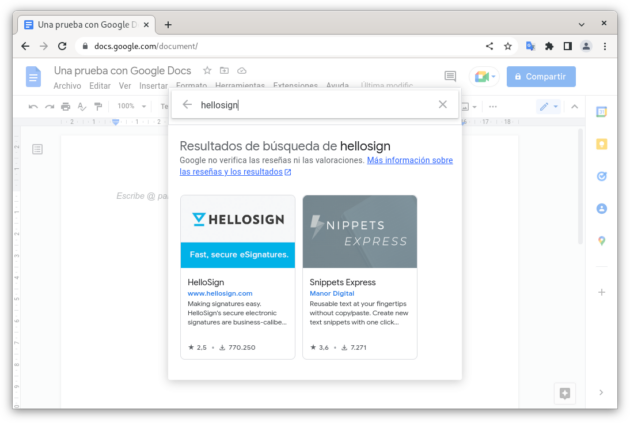 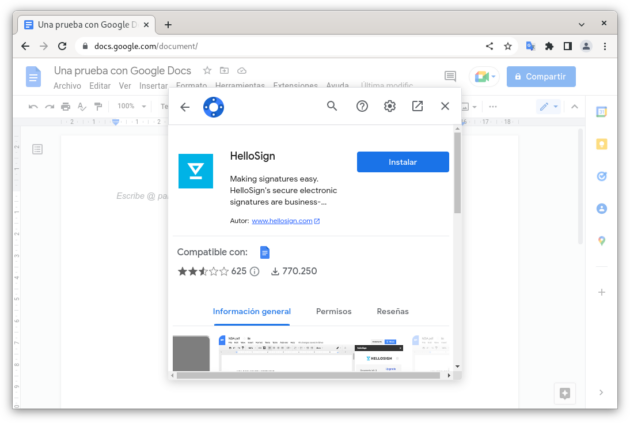 Once the extension has been installed, it will be accessible through the “Extensions” menu located in the menu bar. Nothing that the user cannot solve with a couple of clicks. 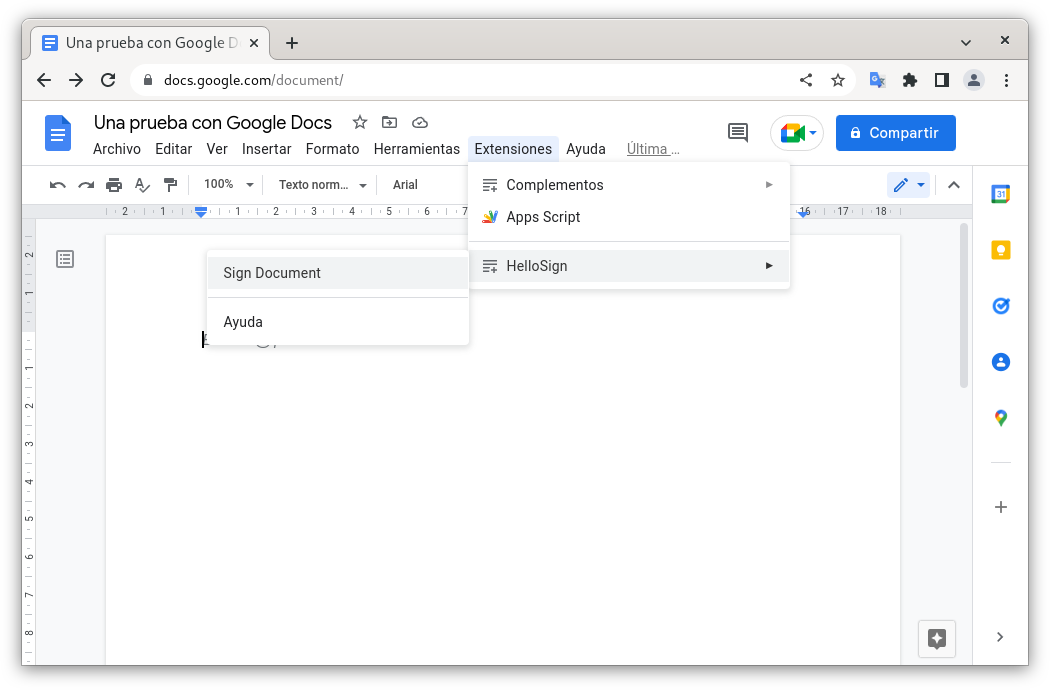 One of the main orientations of Google Docs is to create and edit documents online, in real time and collaboratively. In addition, it supports the import and export of the OpenDocument Format specifications (ODF, of which LibreOffice is its main exponent), OOXML (Microsoft Office from version 2007), plain text in Unicode, Rich Text Format (RTF) and HTML compressed in ZIP format. It also supports export in the popular PDF and EPUB (electronic book) formats.

Now yes, we are going to expose five extensions for Google Docs that can be very useful depending on the context and the user’s situation.

HelloSign is an extension for Sing a document, which can come in handy when it comes to solving legal or business matters. It allows you to easily add a signature and then attach it to the document using just one button. It is also possible to resize the imported signatures, but if you want to sign more than three documents, the user will have no choice but to checkout. 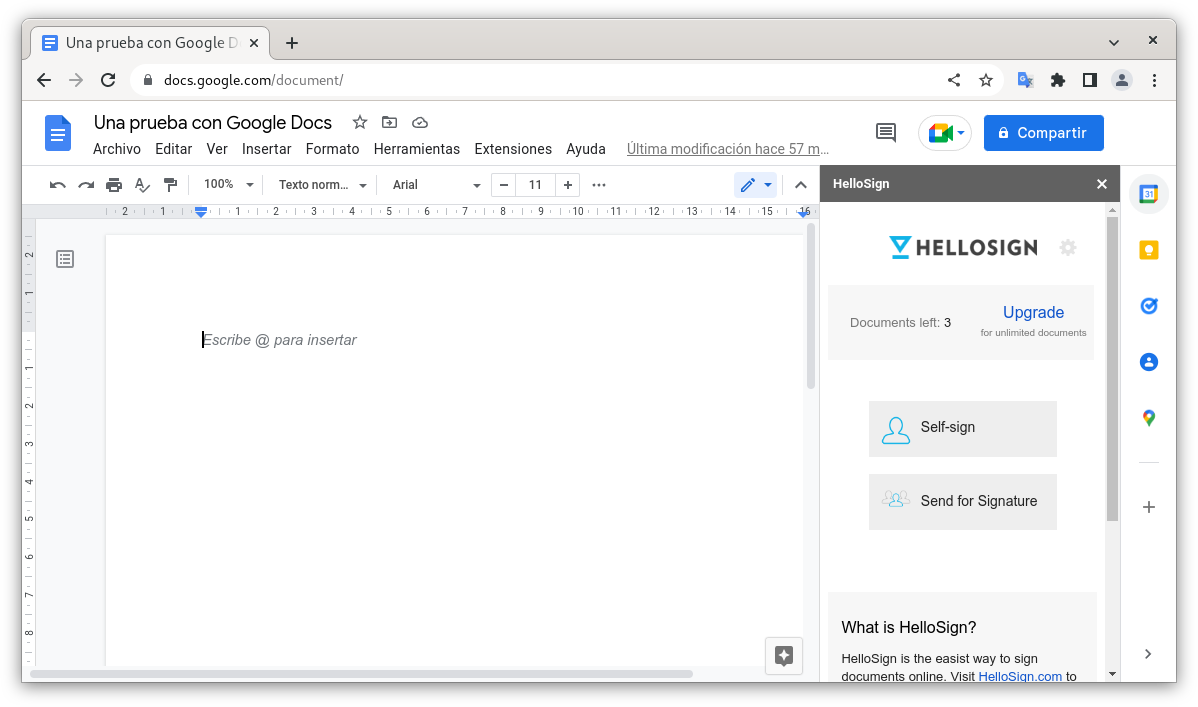 Google Docs offers a word counter, yes, but unlike this one, Word Counter Max allows you to set exclusions to ignore certain pieces of text. In order to optimize the text, the extension offers the possibility of establishing a minimum or maximum number of words, although its developer warns that there may be discrepancies when counting and recommends reporting important bugs that users detect.

Exclusions can be text enclosed in parentheses, text enclosed in square brackets, text within tables, and text within paragraph styles such as “Heading 1”, “Heading 2”, etc. Supports advanced options like displaying the number of words present up to the cursor location and within a selection. 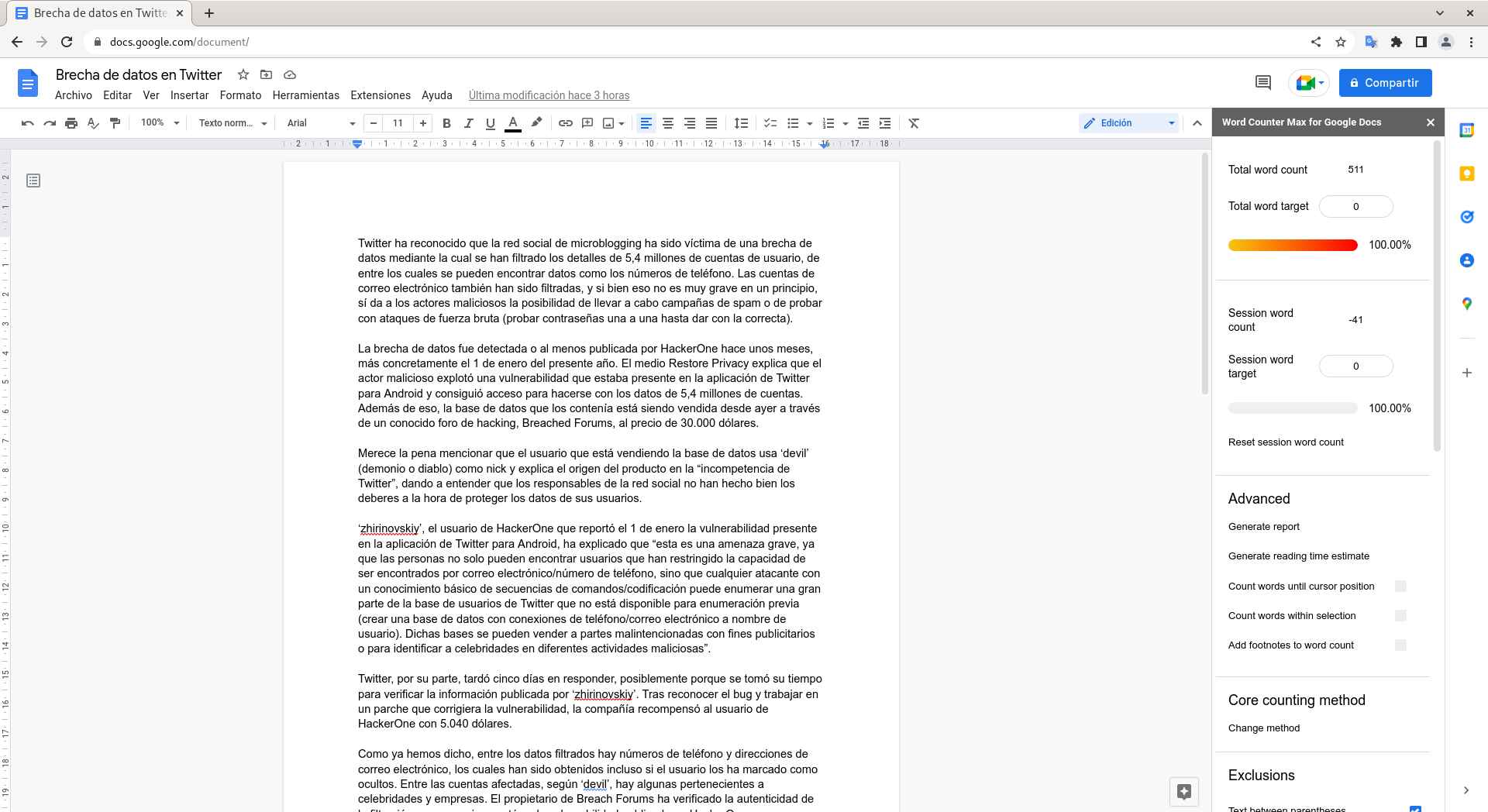 As its name indicates, it is an extension created with the purpose of highlight text and that it can be used for organize essays, categorize ideas, or emphasize important facts. Highlighters in the sidebar allow users to easily highlight selected text and understand the meaning of those colors.”

Probably with the intention of taking advantage of the collaborative approach of Google Docs and the rest of the applications of the same office suite, Highlight Tool supports the sharing of highlight types created by the user. 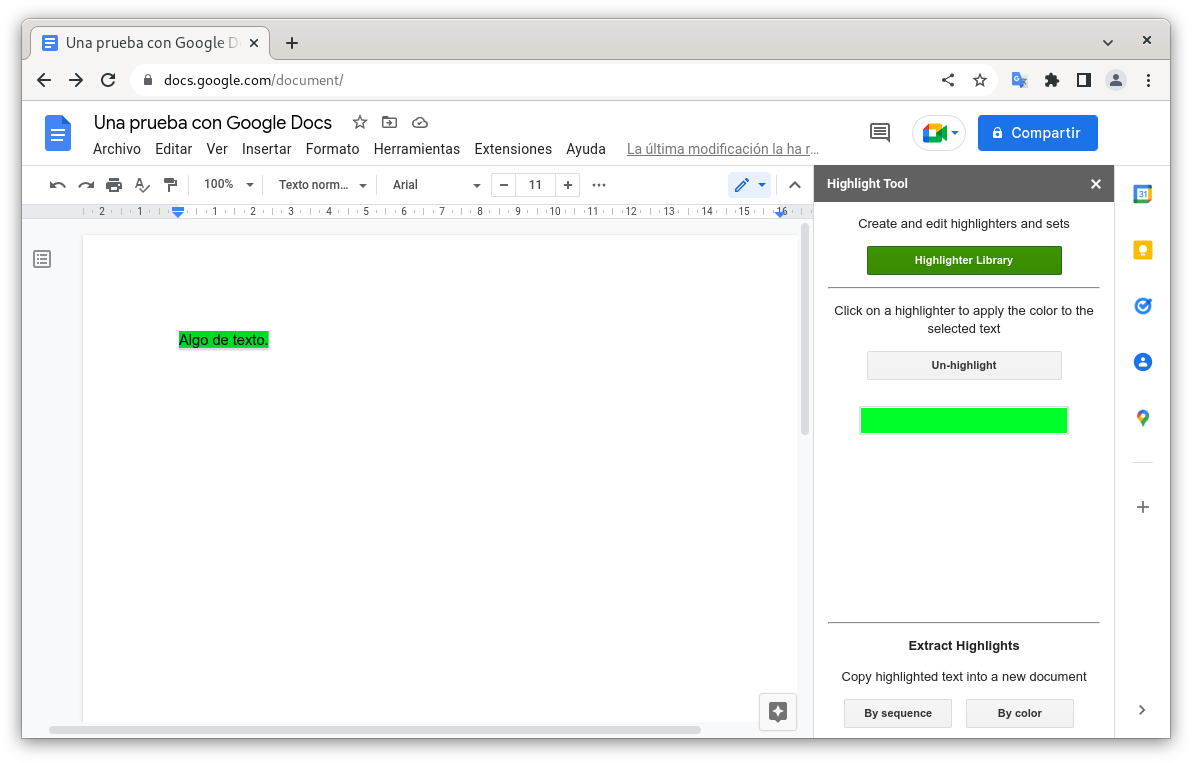 WordPress.com is the WordPress-based website and blog hosting platform. It is not to be confused with the standalone download of the CMS, which is done through the WordPress.org website.

For the rest, this extension does not need much explanation, since basically allows the content created with Google Docs to end up published on a website of the WordPress.com hosting platformthus avoiding the laborious process of copying, pasting and having to recompose both the text and the formatting. 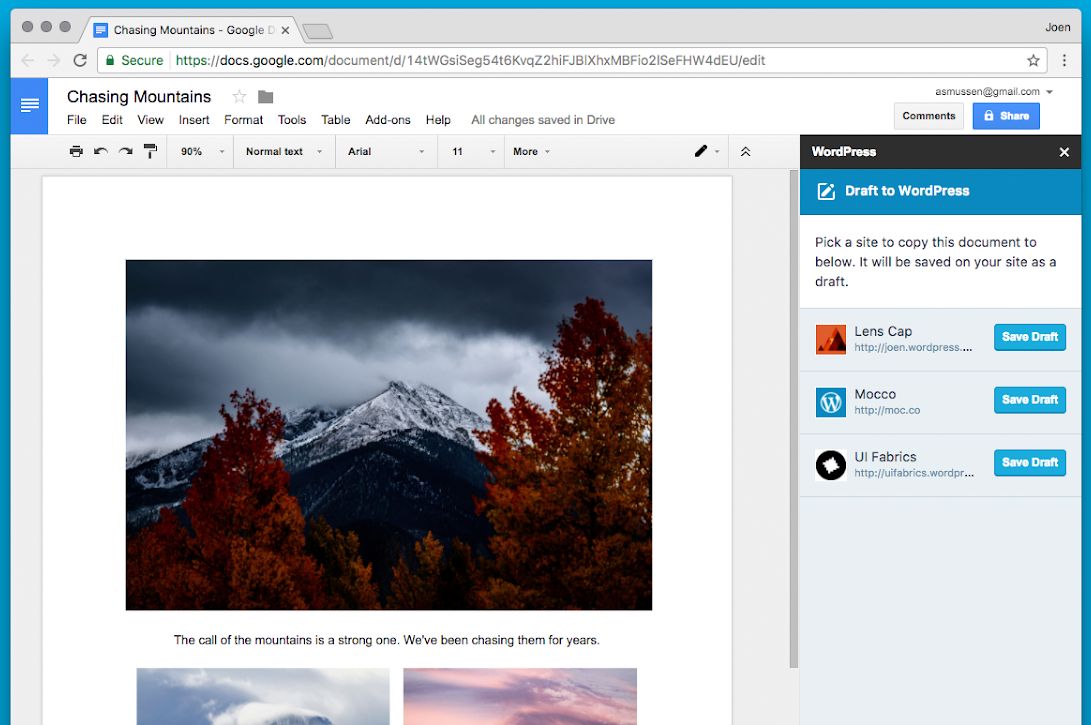 V Mac is a text reader that supports a large number of languages ​​and not only that, but, at least with the voice in Spanish that it includes, it works reasonably well.

Its main audience is people with dyslexia and learning disabilities. The user can select the text that he wants to be read and the extension is responsible for indicating which part of the text is passing to speech at that moment.

Also, when writing a text, V-Mac is capable of suggesting how to complete the current word and which word should come after in the sentence. If a word or part of it is misspelled, the extension can suggest various corrections (correctly spelled words) through a list. 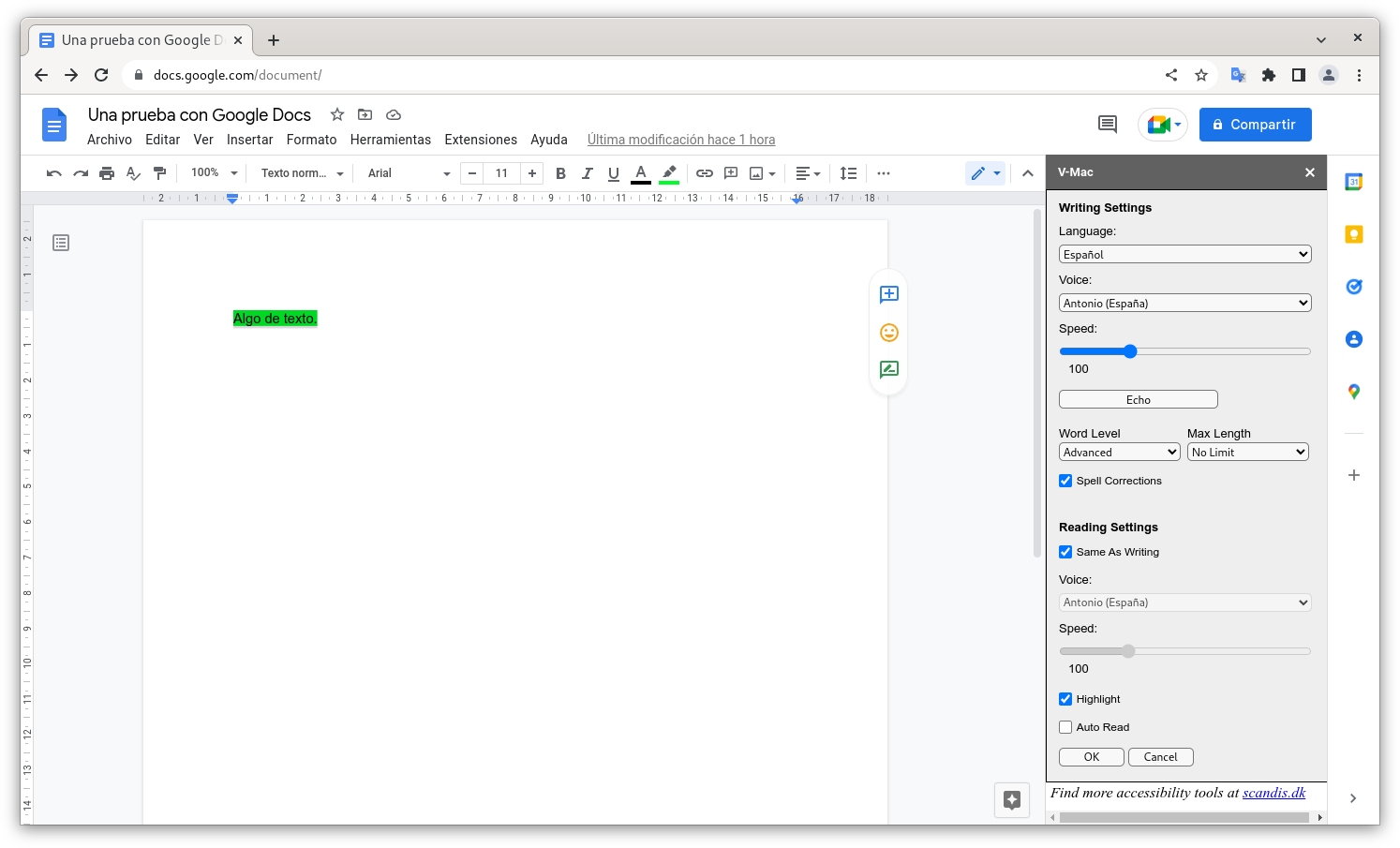 As we can see, Google Docs is not a simple experimental toy intended to provide ChromeOS with a word processor, but rather it has add-ons at its disposal that open the door to carry out more professional, study or help functions for people who have difficulties with reading by various factors.

In addition to everything mentioned so far, there is a factor that Google’s office suite has in its favor, and that is that, thanks to the fact that it mainly works through a web interface, it is independent of the operating system, although Chromium browsers struggle from many years ago to avoid the chaos in the consumption of resources.

this will be the cards that fans will want to collect

These are all the Mario games out there for Nintendo Switch

This Spider-Man: No Way Home villain could have a movie of his own

OnePlus 10T: the smartphone will use up to 16 GB of RAM, a first for OnePlus