The ecosystem of Android It gives the feeling of being out of control for a long time. This situation also affects the Play Store, a store where malware is sometimes detected even today and despite the fact that Google makes an effort to prevent this from happening.

The team behind Dr. Web antimalware has recently discovered a handful of Android apps published on the Play Store that have been created to spread malware and adware and that have been downloaded about 10 million times in total. These applications have already been removed by Google almost in their entirety, but it is likely that the user still has one or some of them installed on their smartphone or tablet.

Regarding the applications in question, these were of many types, allegedly being virtual keyboards, image editing tools, wallpaper changers and more. Obviously, all those applications did or at least tried to do what they advertised, but at the same time, inside, they harbored intrusive advertisements, invitations to subscribe to premium services and could even corrupt the system or end up stealing accounts of their victims on social networks.

In order to go more unnoticed by users, malicious applications took care of hiding their icons or replaced them with others that could cut other system components, such as the SIM card tool. Apparently some of the malicious applications even caused failures, making the user unable to enter their password to uninstall them, while others hid Joker inside them, an old acquaintance who is responsible for incurring fraudulent charges on mobile numbers of their victims to subscribe them to premium services.

Dr. Web has detected two cases of manipulators of images that hid the function of stealing the Facebook account. Both manipulators were dedicated to applying drawing effect filters to photographs or real images (although probably at the moment of truth the filters could be applied to any image). Together those malicious apps were downloaded about 1.5 million times.

The list of malicious apps is long, but one of them is “Neon Theme Keyboard”, which was downloaded more than a million times despite having a score of only 1.8 in the Play Store. Two other apps, “Water Reminder” and “Yoga – For Beginner to Advanced”, were downloaded 100,000 times and 50,000 times respectively. The worst is “Neon Theme Keyboard” and “Yoga – For Beginner to Advanced” are still listed in the store. 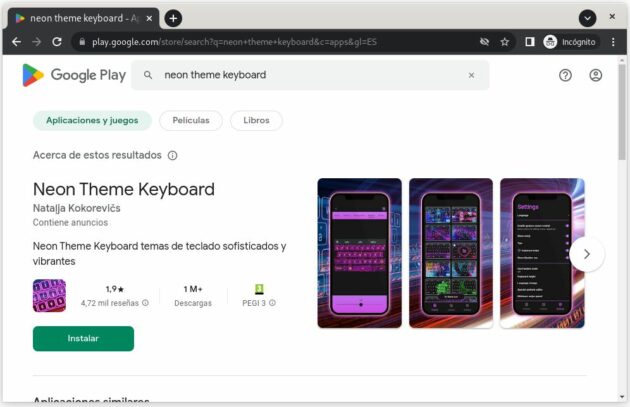 The Play Store should be a safe place for the user, but, unfortunately, it is not entirely like that, and that Google works hard to prevent malware from sneaking into its store. In these cases, it’s a good idea to take a close look at the app’s score and read both the top-rated and most recent reviews to get an idea of ​​whether or not an app is trustworthy. If the doubts are still there after making the checks, it is best not to carry out the installation.

We leave you with the complete list of applications discovered in the Play Store with malware and adware. In case you have one or some of them installed, from MuyComputer we strongly recommend its immediate uninstallation and the restoration of the smartphone to the factory settings in order to guarantee that there are no traces:

DualSense: soon direct updates of the PS5 controller on PC and Mac

Car sales plummet 20% in Europe due to war in Ukraine

The strange special collaboration between Louis Vuitton and LEGO