A Plague Tale: Innocence is a third-person survival game released in 2019 that generated very positive reviews from both critics and gamers. In recent months the title has received an update to support the latest consoles such as Xbox Series X / S and PlayStation 5, and has already announced a sequel (which in theory will be called A Plague Tale: Requiem) which in theory will be released in 2022. In the meantime, now you can get this game for free and we are going to tell you how below.

As usual, this game is now free at Epic Games and you just have to have an account on the platform to be able to claim it for free and add it to your digital library forever. Simply access the website with your account or through the Epic Games Launcher and, in the store section, you will see the free games section as always; Click on A Plague Tale: Innocence and it will take you to the game page.

Once there you will see that on the right side there is a button called «Get», just below a sign that tells you that the game has a 100% discount and that therefore it is free; keep in mind however that the deadline to add it for free to your library is August 12 at 5:00 p.m. After clicking on the Get button, you will go to the purchase section, but since the game is with a 100% discount, the cost is zero and in fact you do not even need to have a payment method associated with your account, so after confirming the purchase automatically you will add the title to your digital library forever. 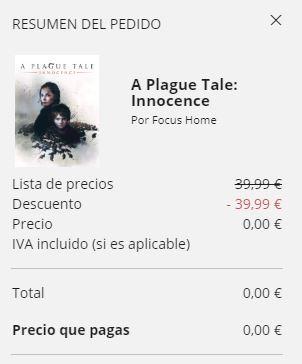 Can your PC with this game?

As we can see, despite the fact that A Plague Tale: Innocence is a 2019 title, it is not really excessively demanding, at least graphically speaking, since even in the recommended requirements it is asking us for a graph that is already long overdue and that in fact neither It was not even high-end in its time, but upper-mid-range. In any case, we estimate that the modern equivalent would be a GTX 1660 Ti at most to be able to move the game to the maximum without problems.

Where the game is somewhat more demanding is in terms of the processor, since in the recommended requirements it is already asking us for a relatively powerful CPU, so extrapolating this to more current hardware we would tell you that at least it would be advisable to have a CPU with 8 processing threads if possible. Refering to RAM notice that in the minimum requirements it asks us for 8 GB and the 16 GB that are already recommended, and this has been the usual trend lately: the 16 GB of RAM in a gaming PC is essential today.

For the rest, it is a title that graphically is not a marvel but that is not bad at all, and without a doubt that if your hardware manages to move it to a good resolution and 60 FPS you will enjoy it a lot, especially if you like this genre of games.

Do you need a PDF made up of lots of your own photos? It’s that easy