We cannot say that we were surprised, because the AirPods 3 were in practically all the pools on the content of Apple’s presentation this afternoon. And it has become even clearer when the music has had such a relevant presence both at the start of the event and even minutes before the start, with a waiting screen in which the music stood out much more than is usual in these events .

Be that as it may, and after several announcements related to Apple Music and the new HomePod Mini, the time has come to meet the new generation of Apple’s wireless headphones, the AirPods 3 we’ve been waiting for so long, and that they do come with some very interesting news, so many as to fully justify a generation jump and, based on what each user is looking for, the investment to move to it.

The most striking thing, without a doubt, is support for Spatial Audio, Apple Music’s sound rendering based on Dolby Atmos and that it is leading the company to force the remastering of part of its catalog, in order to take advantage of the spatial sound properties offered by this Dolby technology. The AirPods 3 are compatible with this technological development, so its users, as long as they are also Apple Music users, will already be able to enjoy all those recordings and remasters that use spatial sound.

Another very interesting feature of these new AirPods 3 is the adaptive equalization. And, according to Apple, the headphones will be able to analyze the sound we are listening to and, based on it, will be able to adapt the equalization. It will be interesting to check, yes, if this adjustment function is fully automatic or if, on the contrary (and as would be desirable) it will also take into account the preferences of each user.

Another very interesting aspect of these AirPods 3 has to do with autonomy. And it is that as we have been told in the presentation, the headphones con a full charge they will be able to offer up to six hours of autonomy. A figure that rises to 30 hours if we have the charges that your box can provide. In this way, even for cases of intensive use we could speak of about two days of autonomy with a full charge of headphones and box.

It has also been incorporated into these AirPods 3 a sensor capable of distinguishing skin, in order to be able to distinguish when they are in the ears of their user, and when in any other type of place or surface. In this way, consumption is optimized, avoiding that the headphones remain ringing when the user is not wearing them. 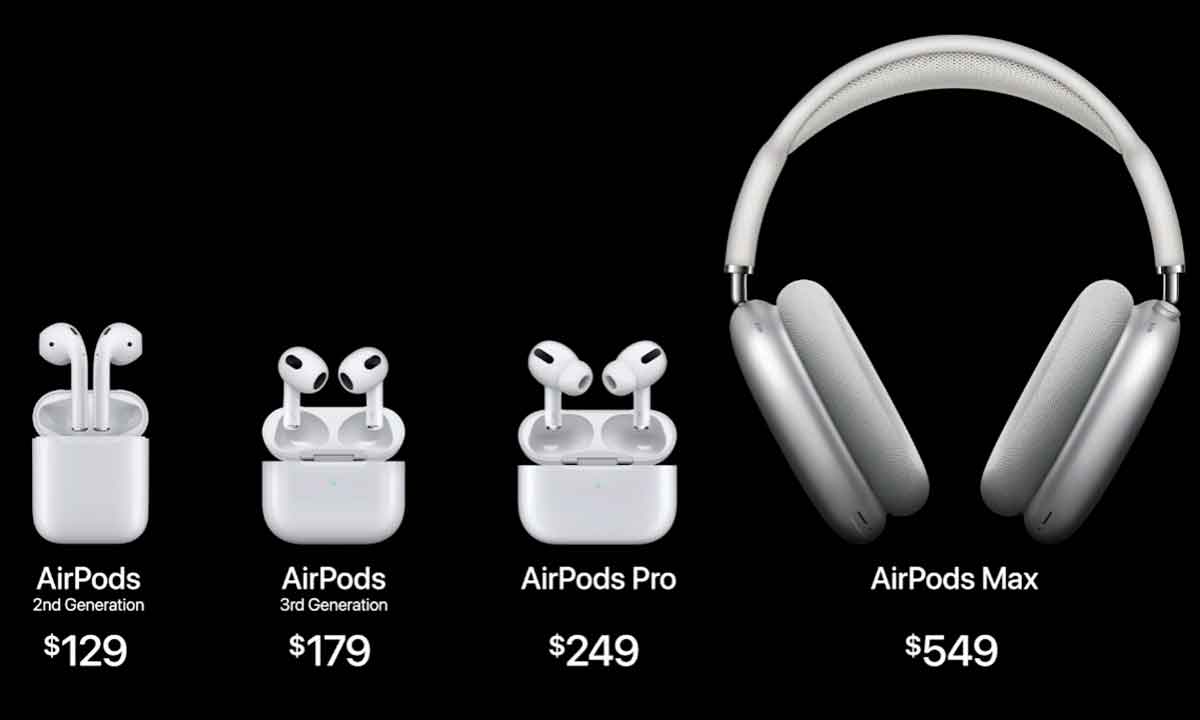 So it remains, with US prices, Apple’s AirPods family.

Regarding its design, which as you can see in the image above is located halfway between the second generation AirPods and the AirPods Pro, these AirPods 3 have a new controller that is supported by a dynamic range amplifier. Together, they will provide a fairly wide frequency range, with powerful bass and crisp, clean highs, according to those from Cupertino. Further, the microphone is covered by an acoustic mesh, whose purpose is to reduce the sound of the wind when we are using them on the street, either during calls or in interactions with Siri.

The AirPods 3 will be available for reservation starting today in 26 countries (we are counting that Spain is among them, and we will update this news when we can confirm it) and will begin to be delivered on October 26. Its price in the United States is 179 euros and, for those who want some AirPods but something more basic, the second generation will remain in the catalog for $ 129. We will also update the prices when the Spanish are published.

Upgrade: And indeed, as we expected, Spain is among the countries where it will be possible to purchase AirPods 3 from day one. That is, they can be reserved from today, and the first units will be delivered from October 26. And as for price, AirPods 3 go up to 199 euros, while for the older generation, AirPods 2 can be purchased for 149 euros.

PS5: Sony files a patent to boost the capabilities of Ray-Tracing