Looking to the next generation of their APUs, Lisa Su’s have taken a different path than the Ryzen 5000H, 5000U and 5000G series for desktop, since they left all the elements intact except the CPU that they upgraded to Zen 3. Instead in Rembrandt they are going to leave intact the CPU that will continue to be based on Zen 3, but with important changes in the elements that surround it.

Among the expected changes are the use of a Integrated GPU with RDNA 2 architecture, this being the first time it has been implemented on PC after its implementation in the SoCs of the Xbox Series, PS5 and Steam Deck consoles.

So it will be AMD’s first change in this regard since the first generation Ryzen APUs. Nor can we forget the memory support DDR5 and LPDDR5. It will be manufactured under the TSMC 6nm node, a derivative of the 7nm node that offers the same power and speed specifications but with an additional 18% density. 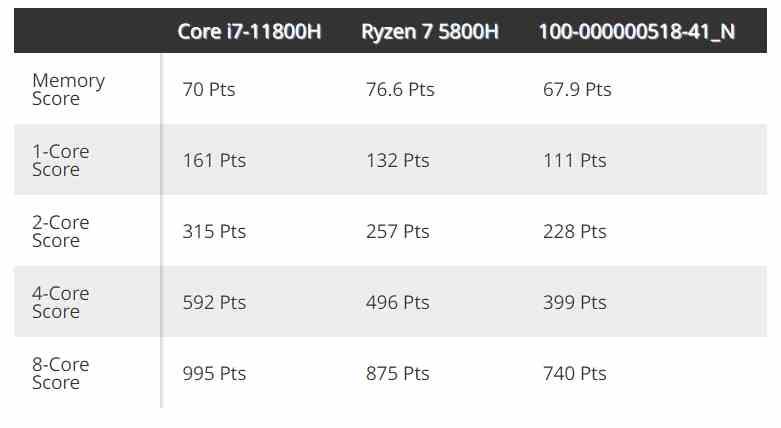 First of all, we must clarify that these results of these first benchmarks of the AMD Rembrandt APU have been taken from a sample uploaded to the Userbenchmarks database, a benchmark famous for giving an excessive advantage to Intel CPUs over any other. What has happened is that someone has published the result of a processor with the code 100-000000518-41_N which is supposed to be an AMD Rembrandt APU.

Surprisingly in the results the Ryzen 7 5800H has obtained scores that place it 19% above mystery APU in the test for single core and up to a 18% in 8-core test. Since they both use the same architecture, Zen 3, the explanation for the lower results is that the new SoC makes use of a CPU at a lower clock speed. Nor can we rule out the fact that the test has been made using single SO-DIMM module of DDR5-4800 C40 memory and therefore with half the memory channels available, which is a quite important bottleneck.

Due to the nature of Userbenchmarks we will not give importance to the Intel CPU, but will take this information as a demonstration that the Rembrandt APU has already been finished, the first pre-build samples have been manufactured and are being put to the test.

The iGPU has also been put to the test

The GPU integrated in the AMD Rembrandt APU will be of RDNA 2 architecture, we do not yet know the number of Compute Units that will compose it or its clock speed, but we believe that it will be the same design that Valve will implement in its Steam Deck. In this case the iGPU is codenamed 1 CFA 0004.

Your performance? Gets on graphics performance tests lighting, reflection and gravity results that are above the integrated Intel Iris Xe DG1 GPU in a 25%, 382% and 7% respectively. Being the only benchmark where the Rembrandt APU GPU has had problems with the MRender.

The change in graphics architecture in the following APUs from AMD not only allows it to outperform the small dedicated GPU for Intel’s entry-level ranges, but also the already veteran NVIDIA GeForce MX350. Where in the test lighting a 19% above, 392% in reflection and 39% in Gravity.

A sample of how AMD is going to arrive pushing well into 2022, because they will (presumably) be presented at CES 2022. What do you think of these first benchmarks of AMD Rembrandt APUs?

Prevent Windows from blocking file downloads from the Internet