AMD has introduced the Ryzen Pro 6000, a new generation of processors that succeeds the Ryzen Pro 5000 and uses the new Zen 3+ architecture. It represents a remarkable evolution over the previous generation, both in terms of performance and efficiency.

The use of Zen 3+ architecture represents the leap to TSMC 6nm processwhich translates into an improvement in performance per watt, and this allows you to maximize autonomy, something that is essential in any current professional laptop. More autonomy equals greater productivity before having to search for a plug, and it can make the difference between successfully completing a work day or having to interrupt it to put the equipment to charge.

AMD Ryzen Pro 6000 processors are optimized to work seamlessly with the latest software, offer up to 30% more performancerun cooler, and have full support for “legacy” software, meaning they can seamlessly move older apps.

We already know the expensive CPU of the Ryzen Pro 6000, we have a monolithic kernel configuration with a maximum of 8 cores and 16 threads based on the Zen 3+ architecture, manufactured on the 6nm node and with 16 MB of L3 cache and 4 MB of L2 cache. These new generation processors are accompanied by a Integrated Radeon RDNA 2 GPUa solution so powerful that, in fact, it is able to compete with low-power dedicated graphics solutions.

The integrated Radeon RDNA 2 GPU featured in the Ryzen Pro 6000 supports the latest industry standards, including the most advanced codecs and connectors. HDMI 2.1 and DisplayPort 2.0. We will not need a dedicated graphics card to enjoy a perfect experience, and a good level of performance with numerous graphic applications. 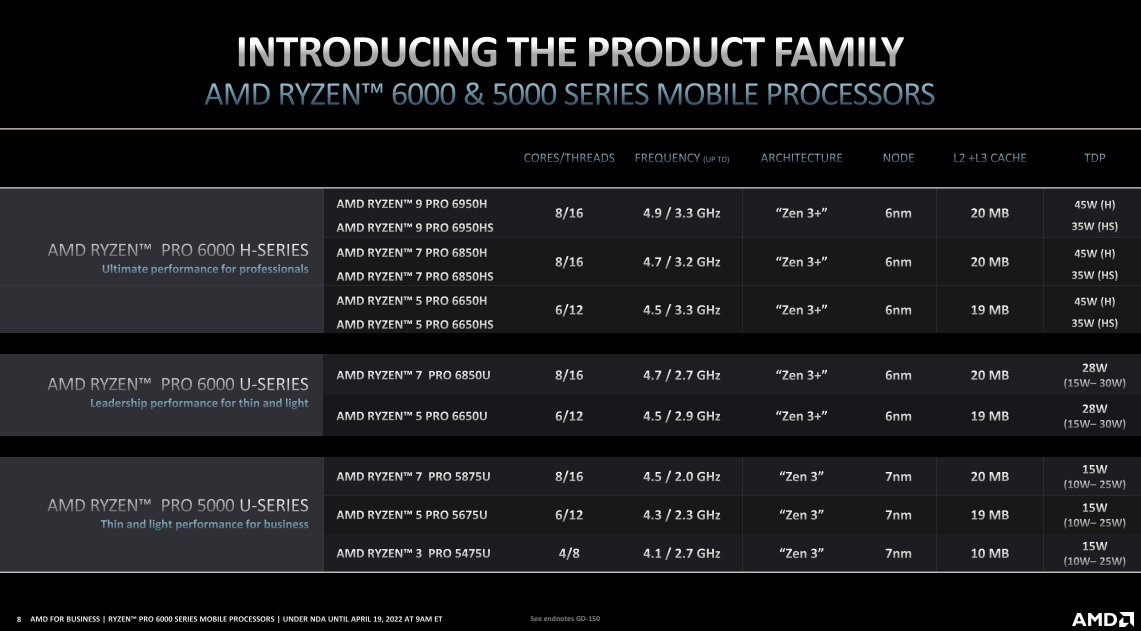 Within the Ryzen Pro 6000 series we can find three lines, the «H», which differentiates the models with higher performance and TDP (up to 45 watts); the “HS”, which is a version of the previous one with a lower TDP (up to 35 watts); and the “U”, which is an ultra low consumption version, whose TDP is configurable and can range between 15 and 28 watts. The latter are designed to integrate seamlessly into ultra-light equipment designs, typically weighing less than 1.5 kilograms. In the attached image we can see the complete specifications of these new processors. 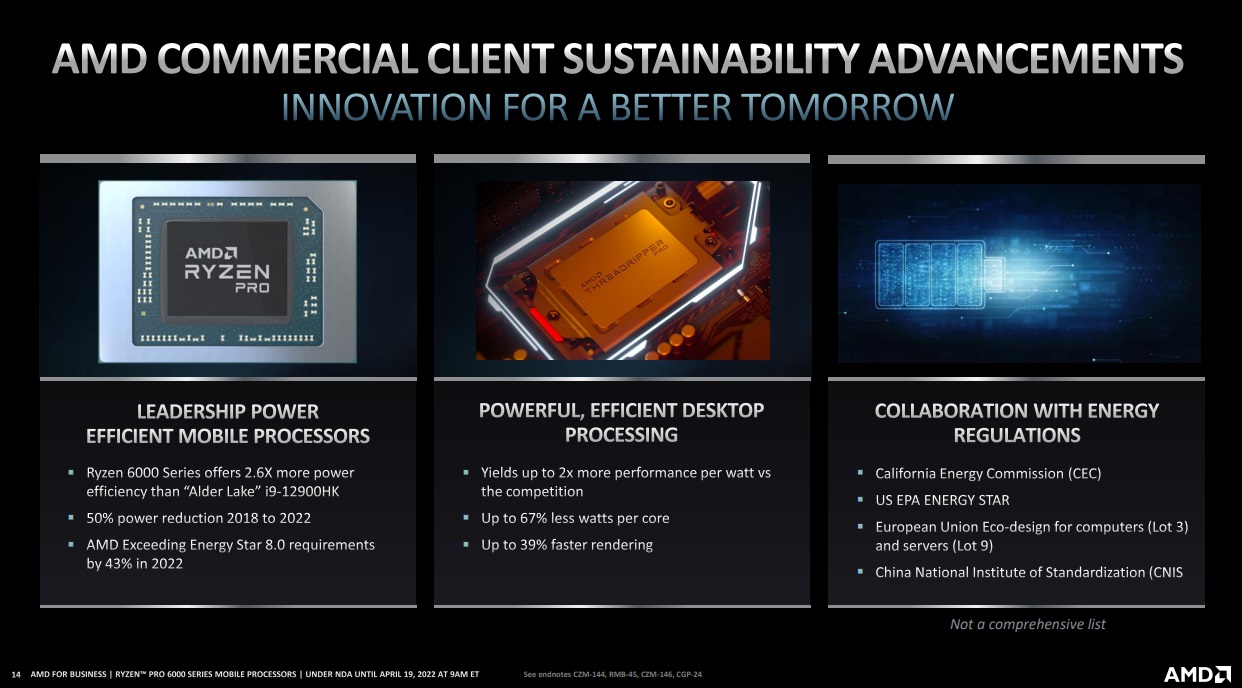 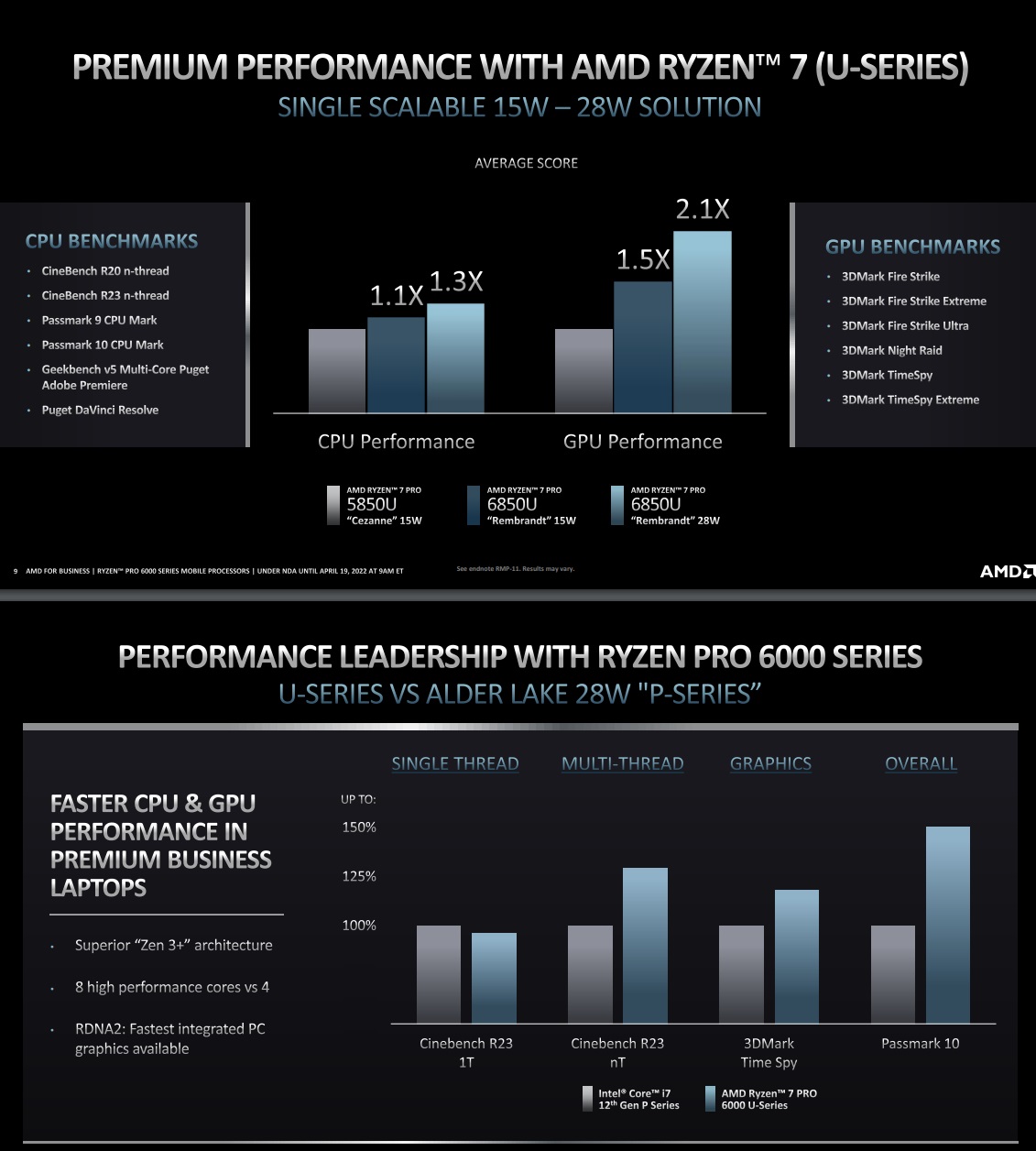 According to AMD tests, this new generation of processors it is more powerful than Alder Lake-P in multithreading, and also in tests centered around the integrated GPU, as can be seen in the second attached graph. Returning to efficiency, AMD ensures that the Ryzen Pro 6000 have reduced consumption by up to 50% compared to the 2018 models, and that it has achieved very important milestones in terms of efficiency, such as doubling the performance per watt compared to the competition, reduce consumption per core by up to 67% and improve rendering speed by up to 39%. 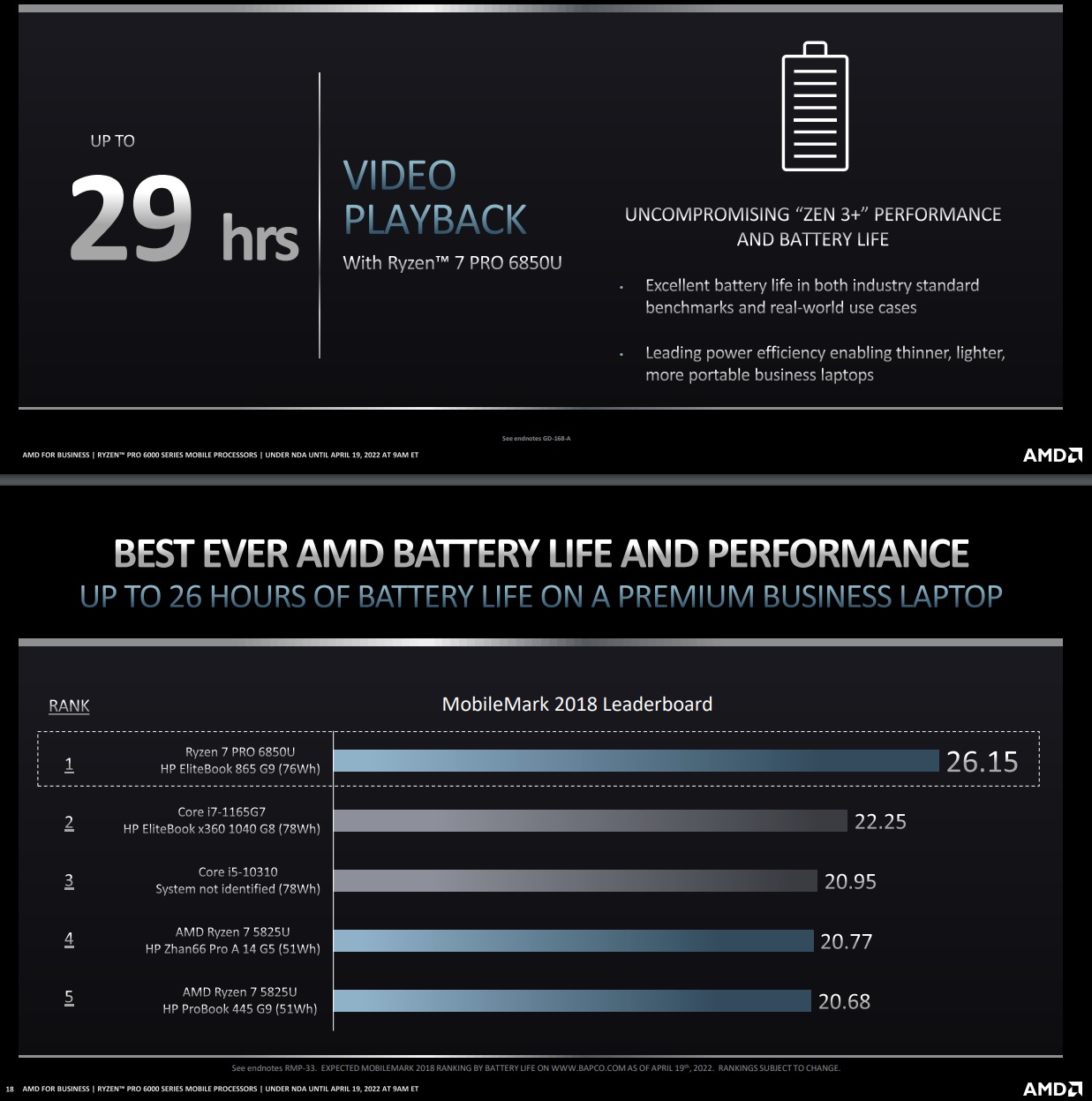 AMD promises a range of up to 29 hours per battery charge playing video with a Ryzen 7 Pro 6850U, a truly impressive figure, since we are talking about more than a day of use without having to charge the equipment. In synthetic tests such as MobileMark 2018, a said processor registered just over 26 hours of autonomy. 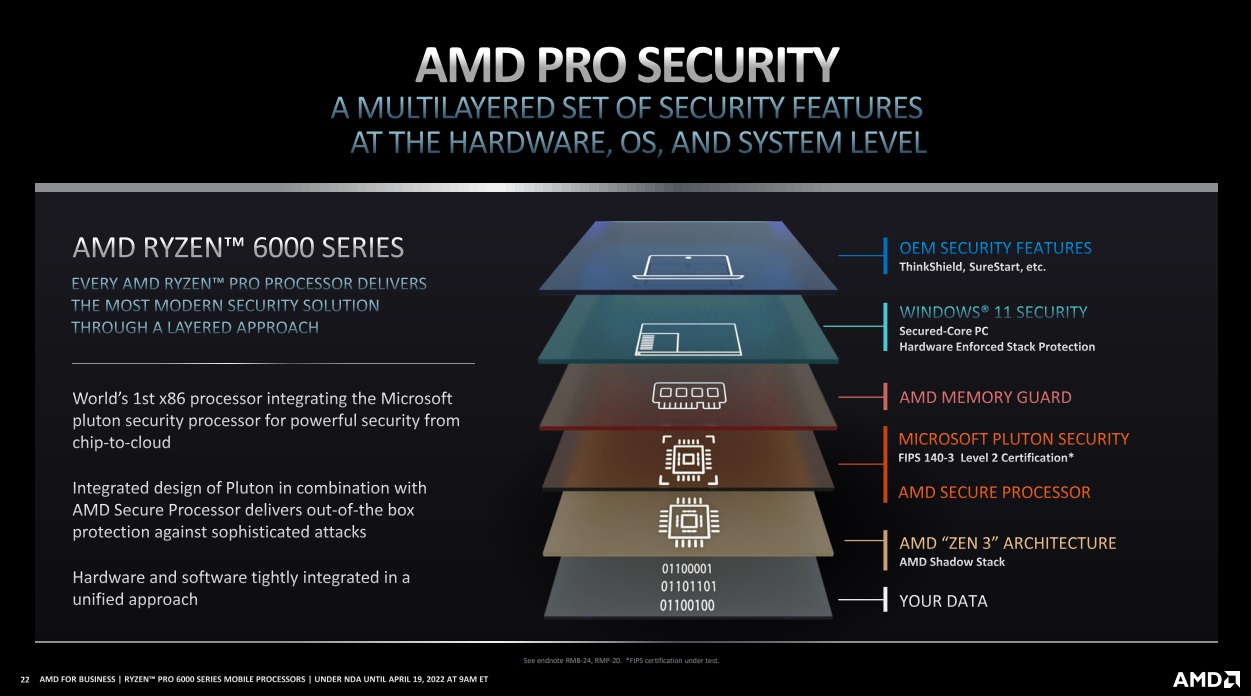 Another aspect that AMD has improved with the new Ryzen Pro 6000 has been safety. This new generation comes equipped with OEM security features such as Lenovo ThinkShield and HP Sure StartWindows 11 Secured Core, AMD Memory Guard, Microsoft Pluto, AMD Secure Processor and AMD Shadow Stack. All of this shapes one of the most secure generations of processors that AMD has released to date. 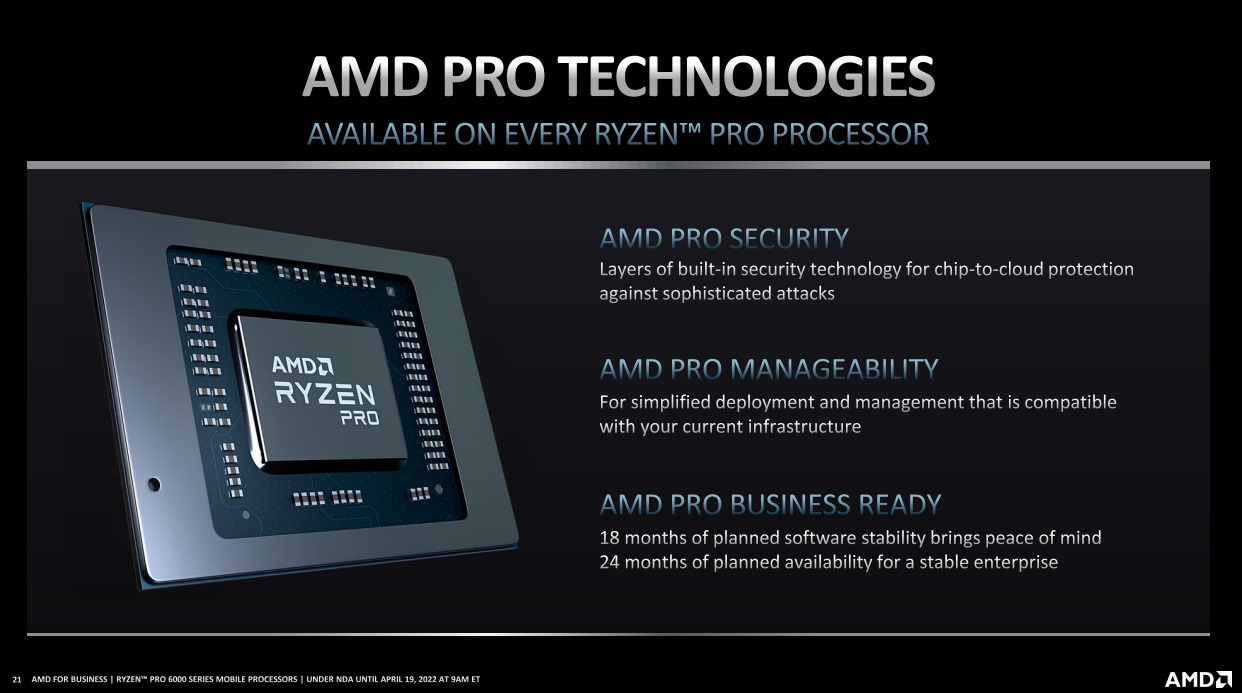 How could it be otherwise, the Ryzen Pro 6000 also includes solutions that simplify and facilitate the integration and management of equipment in professional environments. In this sense, it highlights the AMD Manageability Processor, that simplifies equipment management and integration, and certification AMD Pro Business Readywhich is a synonym of stability and reliability. 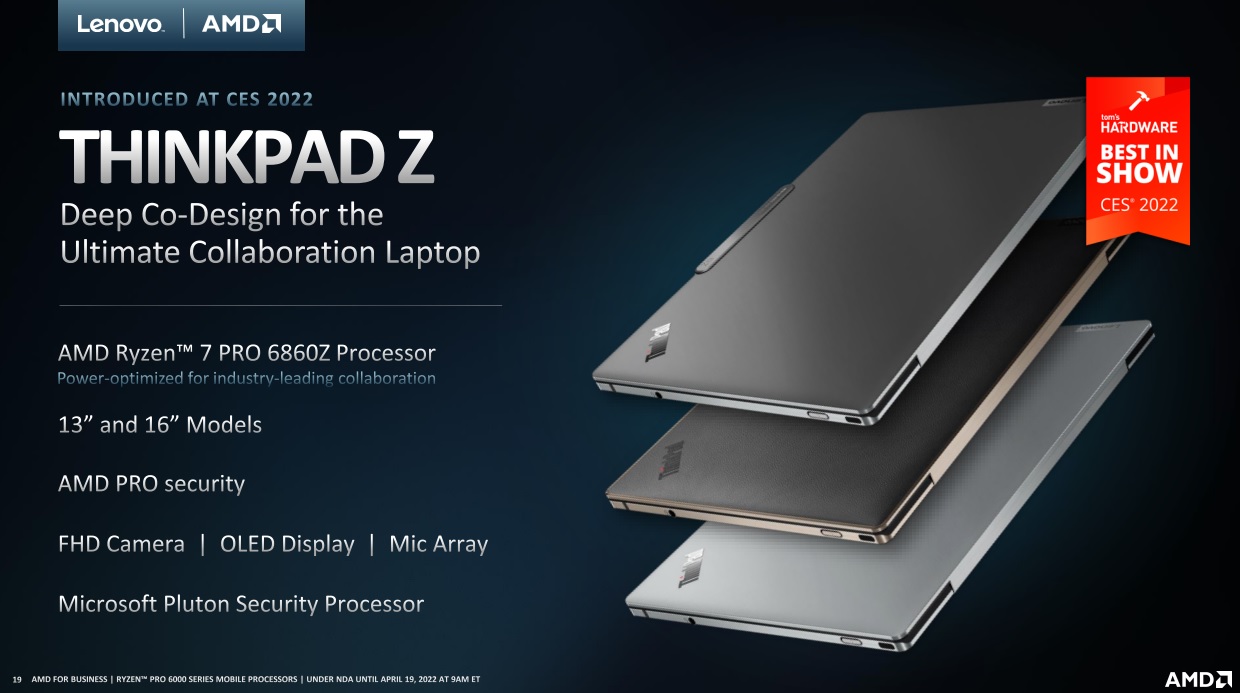 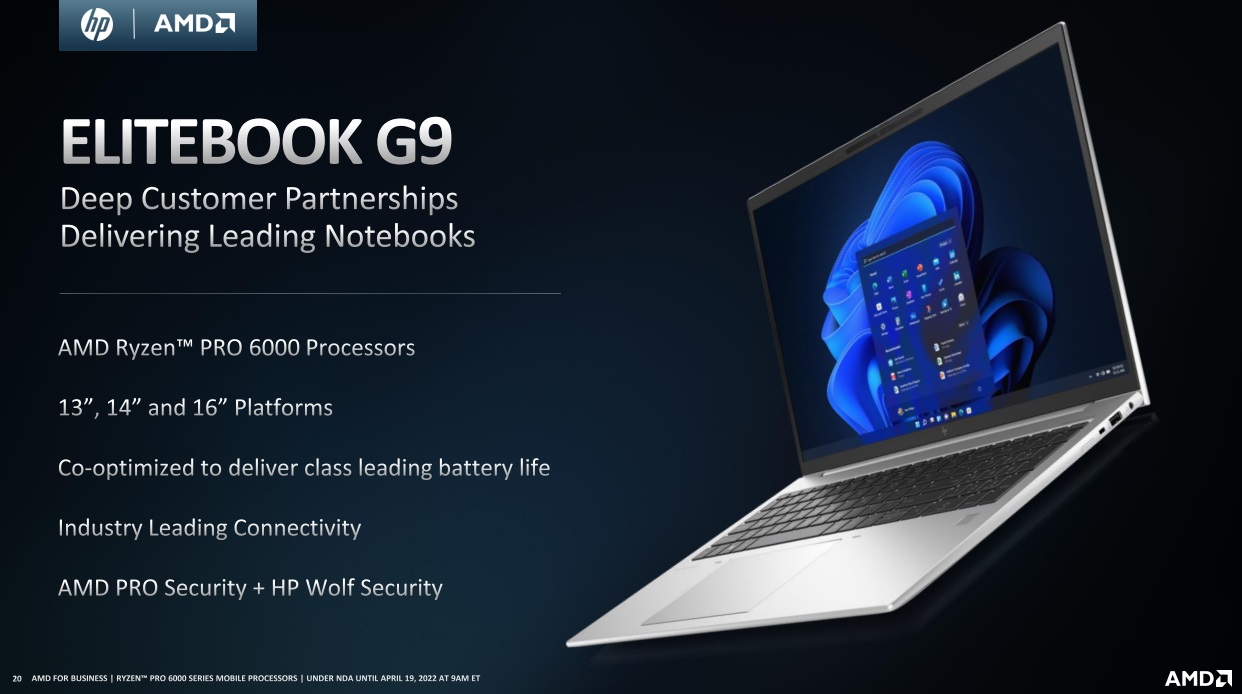 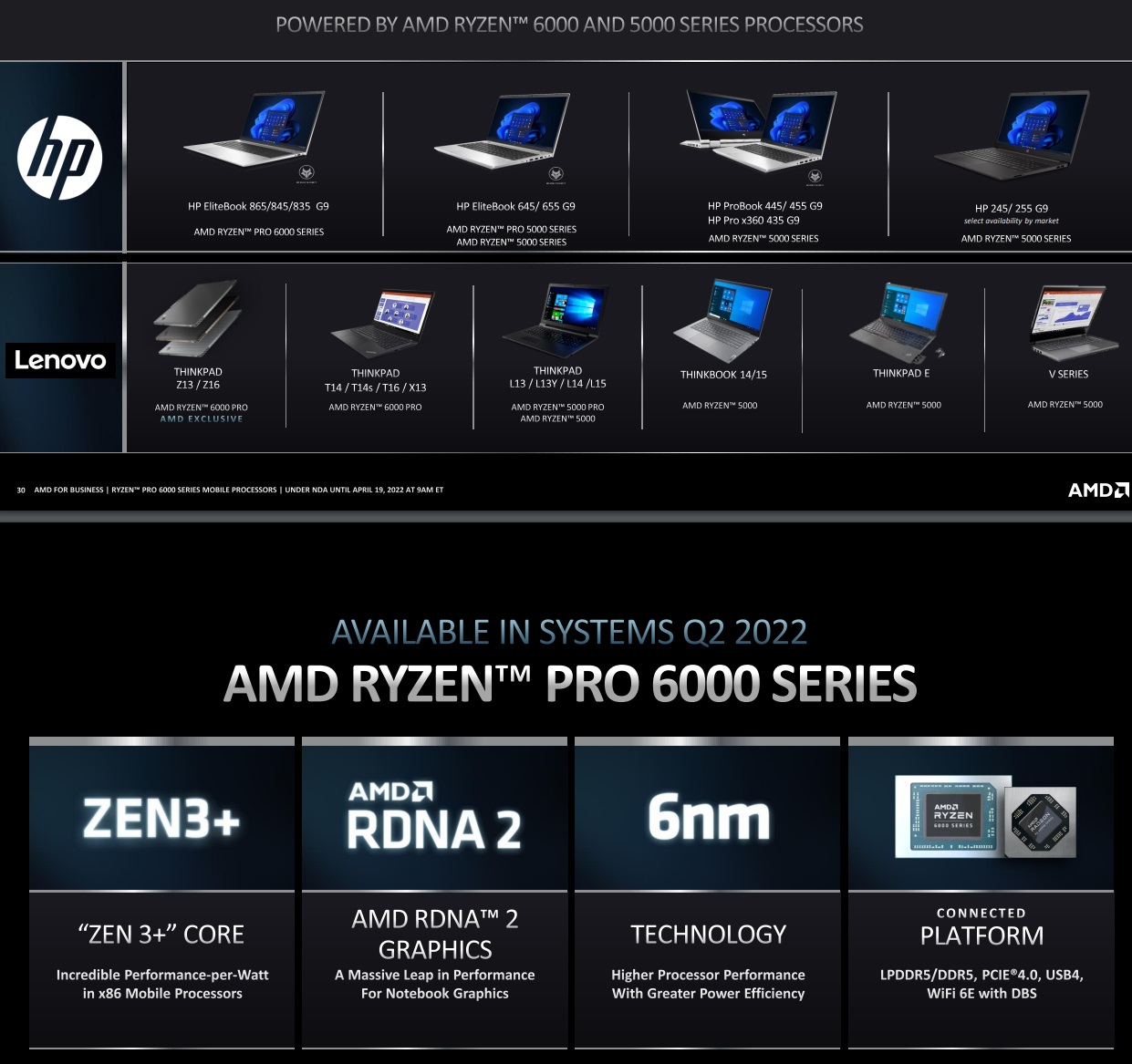 Google will show cloud games in the results

HDMI 2.1a cables will soon be longer thanks to this technology