Despite its first delays, and the presence of an early access beta, Battlefield 2042 has not managed to have the expected launch impact. And it is that although he has met a good number of players, the gaming experience was not ideal, with a buggy launch.

Something that of course, being a full price game, has not been to the liking of the players, who have taken their opportunity to review the game on all platforms. Starting with Steam, at the time of writing, Battlefield 2042 has received over 39,500 “mostly negative” reviews. Although this is only one of the ways in which players are making themselves heard.

We can currently see how the game reaches a still salvageable 73 out of 100 in media opinions compiled by Metacritic, players have wanted to punish this latest installment of DICE with greater severity, with more than 3300 ratings that leave it at 23 out of 100, one of the worst notes ever achieved in a triple-A premiere. 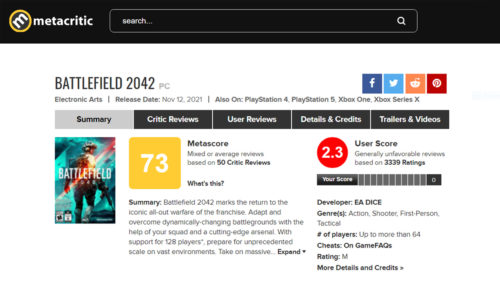 While much of this anger came from a pretty unfinished release, has now been even more accentuated after the arrival of its first patch. And it is that DICE detailed the content of the patch on the first day, which despite solving some important problems reported by the players, still it remains small and insufficient.

Specifically, this update focuses on fixing an issue where players are seemingly teleporting from one position to another, something that obviously makes them difficult to fight. For its part, the developer has added “server-side updates aimed at reducing the problem”, something that although it will make them find the problem less frequently, it still does not completely solve the problem.

On the other hand, you should also notice a reduction in stuttering on the Breakaway map, although at the moment, it is still working on solutions to solve the same problem on other maps. Similarly, the patch fixes other issues associated with Hazard Zone mode, including a critical bug that revealed players’ locations on the map even when they weren’t supposed to be visible or hadn’t been detected by other players.

With that said, DICE has promised that this is just the beginning of the Battlefield 2042 updates: “Over the next 30 days, we are scheduled to release two more updates, and our next update will deliver more fixes and improvements that we have identified during this first week of Early Access, and a larger and more substantial update after that.”.

Everything that is known about the Wonder Woman 3 movie