brave It has just released its new version and, although it is not usual in a browser that hardly differs from the Chromium on which it is based except for small details and its -here yes- focus on the protection of user privacy on the one hand and in everything that smacks of ‘crypto’ on the other, it brings news that you will be interested in knowing if it is your main browser.

The point is that those responsible for Brave do not work as much as they should on the information related to the release of new versions of the application and, with the exception of famous features that do not always have to do with the browser’s own skills as a browser, if you don’t look for it, you may not be aware of the changes being implemented.

And what do you want me to tell you: despite how ‘special’ it is, the aroma of ‘crypto’ that is breathed using it -only if you want it- or its pro-privacy position -also only if you want it, although I don’t I see sense in not doing it… for that use Chrome- Brave is still a browser whose main purpose is to surf the Internet.

As well. A couple of days ago Chrome 100 was released, which means that very shortly before Chromium did it in its respective version, and that very shortly after the rest of the browsers based on it will do so, including Microsoft Edge, Opera, Vivaldi …or Brave, as the case may be. Of course, the version number depends on the specific browser and Brave does not follow Chromium in this regard.

Of the novelties that Chrome 100 brought, however, the only one that is obvious and that is included in this release is the option to mute tabs with one click about sound icon. That and the corresponding fixes and optimizations that Chromium 100 introduced, in addition to its own and, as indicated in the release notes, a handful of tweaks mostly related to wallet features, cryptocurrencies, etc.

However, for ordinary mortals or, for that matter, Brave users, there are a couple of new features in this version (1.37 for the curious) that are worth noting, as anticipated in the headline. The first is the improvement of the possibilities to customize the browser, which finally allows to put a personalized imageforgive the redundancy.

As you may already know if you use Brave, you can leave the home or new tab page without an image, or pull the “Brave backgrounds”, which tend to change every time you open it and are generally not bad. However, it is a bit tiring so much change, when most images are always the same. So, you can now cut to the chase and choose the image you want to be displayed there.

Also, do not worry if you are one of those who also allows show Brave sponsored imagesBecause it doesn’t affect anything. You can change this option from the home page preferences on the home page itself. 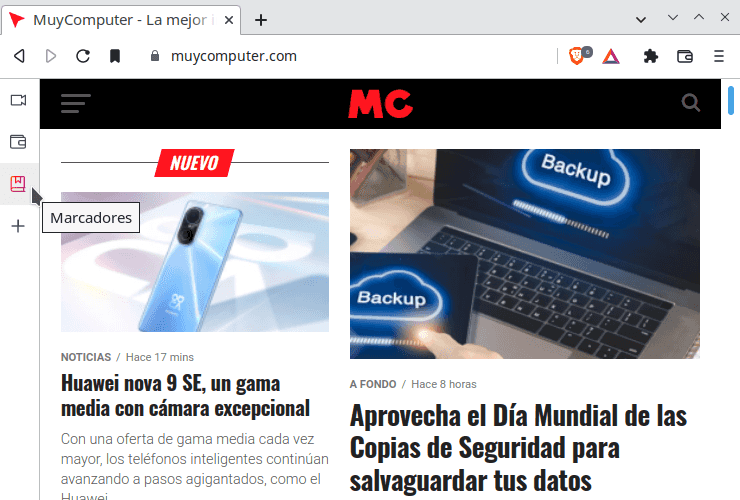 Second, Brave incorporates the bookmarks side panel that Chrome released a few versions ago, with its own default options: a shortcut to Brave Talk, another to the cryptocurrency wallet, and the bookmarks panel. If any of these options does not interest you, you can remove it from the middle with the contextual menu, as well as you can add any site that you want to appear there, in the style of Opera or Vivaldi.

You can activate the side panel from «Settings > Appearance > Show Sidebar» and choose if you want it to be displayed always or only when you move the cursor to the left edge of the browser, which is where it appears (an option to move it to the right would not hurt).

Huawei nova 9 SE, a mid-range with an exceptional camera