It doesn’t seem like I’m giving much to talk about the promising Brave seekerAnd yet it is one of the most interesting initiatives that are being taken in favor of an open Internet apart from large corporations, particularly Google, but also others. Are you a Brave user? Get ready then, because Brave Search begins to occupy its position in the browser as the default search engine.

As we told you at the time, at the beginning of summer the new Brave search engine was announced, an unexpected “feature” for the browser of the co-founder and former CEO of Mozilla that, fortunately, is not only available to Brave users. , but of anyone who wants to use an alternative search engine, but powerful and very well designed. However, the Brave search engine began its journey – and continues to do so – in beta.

If with the launch of Brave 1.30 the browser launched the Brave Talk videoconferencing service, with its new version the great novelty is the first line of Brave Search, but only in certain territories for now. Thus, the Brave search engine replaces Google in the United States, Canada and the United Kingdom, while in Germany and France it will do the same with DuckDuckGo and Qwant, respectively.

However, this is a change that will only affect new browser users. Those already using it will keep their default search engine and will have to manually switch to the new Brave search engine, if they wish to do so. To make the change you have to go to the browser settings, filter the term “search engine” and there is the drop-down to choose one engine or another from among the pre-installed ones.

By the way: no matter where you are, because as you see in the picture, you can now activate the Brave search engine to use it by default, even if it is still in beta; or add it from the web (contextual menu on the search field and “Add as search engine …”.

The difference that you will find if your language is Spanish or any other with fewer speakers is that everything is in English, although the possibility of narrowing down your searches exists. Brave users in Germany and France already have it translated into their language; This is most likely the reason why the expansion of the Brave search engine will take place gradually. The results, however, should be the same.

That is, in fact, the crux of the matter: unlike other privacy-friendly search engines, such as the aforementioned DuckDuckGo or Qwant, Brave Search does not rely on Google or Bing results, but exclusively uses its own. DuckDuckGo, for example, uses its own link crawlers, but the bulk of its results are based on those of Bing; Qwant, on the other hand, uses Google results.

Both DuckDuckGo and Qwant offer anonymized results to prevent user tracking and respect their privacy, but they continue to contribute to the hegemony of Google and, to a lesser extent, Bing. With one big difference: the quality of the results is not that of the original engines. The Brave search engine, for its part, is really impressive in terms of quality of results because they cook it themselves and for the little time it has. 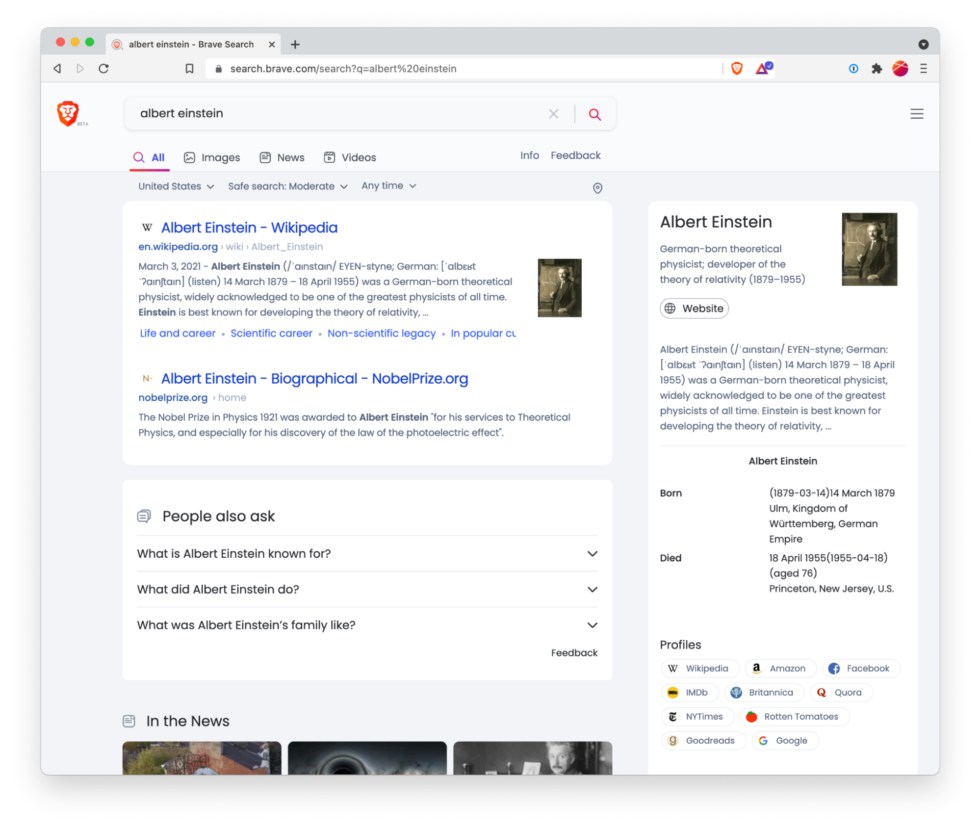 The latter, however, is a personal appreciation, and that is that I made the leap from DuckDuckGo -which I have never liked very much, really- to the Brave search engine when it became known about its existence, just to try, and with it I continue, surprised at how well it works and how well designed it is in terms of interface and features … But no, it is not at the level of Google and it will hardly be one day, and the same is true for any other search engine.

Why no search engine can stand up to Google is as evident as the immense investment with which the Internet giant maintains the apple of its eye: it is estimated that more than 60,000 people work directly on Google Search and thus there is no competition worth it. ; that’s why we settle for an alternative that is of quality, even if it does not reach Google– The sacrifice to improve your privacy online is not using the best.

Or can you compete? It can be done, but only if many pitch in: with this aim, the Brave seeker has, more than launched, retaken, the initiative Web Discovery Project (WDP), a system inspired by that of the defunct Cliqz -a search engine that fell by the wayside- with which to help improve the coverage and quality of Brave Search results anonymously. But that, as they say, is another story.

A review of all the James Bond films, Agent 007