Cisco is convinced that despite the fact that a large part of the companies have begun to push the “back to the office”, hybrid work is here to stay. In fact, according to a recent study carried out by the American multinational, nine out of ten Spanish workers want to be able to choose between remote and face-to-face work, in an environment that combines the best of both worlds.

That the company wants to promote this type of mixed presence is demonstrated in conferences such as the one just held WebEx One, in which the company has just presented some of the new features that will progressively be incorporated into Cisco WebEx, its video conferencing and collaboration solution.

In it, he highlighted that the world market of the videoconferencing sector has grown in 2021 up to 6,030 million dollars. On the other hand, Cisco also considers that hybrid events continue to have a large presence in our work lives, since according to its survey, in 2022 up to 79% of organizations expect to launch some type of event that includes an assistance option virtual.

Many of the new features that are incorporated into WebEx are directly related to the use of Artificial Intelligence, with the aim of improving the quality of calls, improving the digital well-being of participants and even interpreting their mood throughout of a virtual meeting.

In this sense, one of the first features to reach the platform is what they have dubbed as “AI-powered audio intelligence”, Or what is the same: the use of an intelligent algorithm that optimizes the voice of all participants in meetings, regardless of their distance from the microphone, while automatically eliminating background noise.

“People Focus”, another of the great novelties that have been presented in WebEX One and that will arrive on the platform throughout the month of December, also makes use of AI algorithms to interpret the facial gestures and body language of those attending a meeting virtual. At the same time, it will improve the interface of the meetings, allowing, for example, to separate the participants who are in the same room into different individual tables, so that the dynamics of the meeting is facilitated or, even, integrating other platforms such as Zoom or Google Meet.

Another cool feature coming in the next few weeks is “Collaboration Insights”, which offers users much more information about how they work on the Cisco platform. In this sense, users will be able to access details such as the ten people with whom they meet the most on a weekly basis, the time they spend on the platform or, thanks to additional functions such as Well-being and Cohesion the stress or mood of the participants in a work group.

In the event that this stress level is high, the company recommends accessing “Thrive Reset”, a space that allows you to download preloaded ‘resets’ on a series of topics or personal photos that help users to focus on breathing, reframe problems or get up and stretch.

Along with these innovations and others such as the integration of Socio Labs and Slido in its events platform WebEx Events, Cisco has also announced the availability of new hardware devices. In this sense, the new Webex Desk Mini
It features a 15.6-inch 1080p interactive screen, a 64-degree HD camera, a full-range speaker, and a set of microphones to eliminate background noise. Both this and the update of the 24-inch WebEx Desk will arrive in the offices in 2022. To these are added, as a result of its alliance with Bang & Olufsen, its new Cisco 960 headsets. 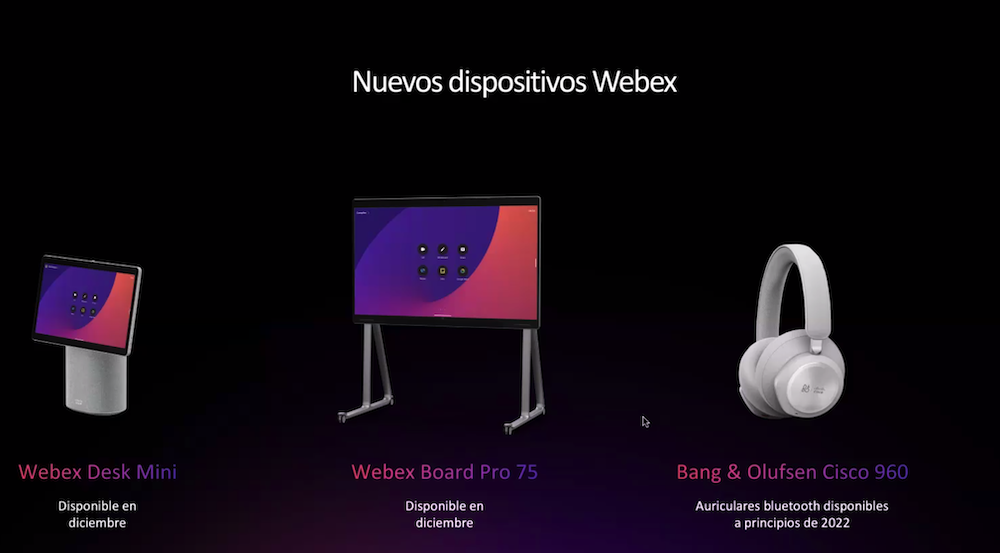 The jump to augmented reality

Finally, the company confirms that it enters the world of augmented reality and presents the beta of WebEX Hologram, a solution agnostic and available for the main AR devices that allows to launch reversal meetings in real time using a hologram system.

The multinational that has confirmed that it is starting to work on this platform with clients such as McLaren, has explained that WebEX Hologram combines photorealistic 3D holograms with Webex meeting functionality, providing a “true sense of co-presence.”

In this sense, users can share in real time both physical and digital content (for example, physical parts of a vehicle or digital images of the part) and in this phase, it supports a “one-to-many” presenter experience. Compatible with Microsoft HoloLens and Magic Leap, Cisco expects its new solution to play an interesting role in industries such as manufacturing, design, and healthcare training.

the reboot trailer is finally here!