After a few months of requests for news and technical videos that explain terminology related to video, resolution and other technical characteristics of today’s Smart TVs. Finally, after several days of writing, today we bring you a guide to buy the definitive Smart TV, both in written form and on video. In this article, the first part of a collection of several, we are going to explain what 4K is, UHD resolution, the specifications of the UHD Alliance, HDR and its different «flavors» such as Dolby Vision and much more.

One of the main points when explaining what UHD is and its specification is to understand well what the specification UltraHD Premium. This, promoted by the UHD Alliance (a group of companies, producers, brands and manufacturers that agreed to implement minimum specifications) and that came to lay the foundations of what would be the UHD: resolution, color, dynamic range (HDR), supported audio types, etc.

The following technical specifications were reached for the new era of 4K (or UHD), which all material -and also displays such as Smart TVs and projectors- should meet to be considered truly 4K:

Resolution: Both the content and the viewer must support the resolution of 3840 x 2160 pixels.

color depth: must support a bit depth of 10

color space: Must be displayed in the new extended color space (BT.2020), covering at least 90% of the DCI-P3 space for displays.

high dynamic range: this is optional (it can come in SDR), but if it is included, it must have at least the open HDR standard, that is, HDR10. Optionally you can include more formats such as HDR10 + or Dolby Vision.

black level: in LCDs they must be able to at least reach 0.05 nits and 0 nits in the case of OLED (perfect black).

brightness level: in LCDs they must be capable of at least reaching 1000 nits of peak brightness at 10% of the screen and 540 nits in the case of OLEDs.

Do not worry that we are going to break down all these sections one by one. For now, stay with the fact that, if you want to buy the best Smart TV on the market, it must meet at least the aforementioned parameters. 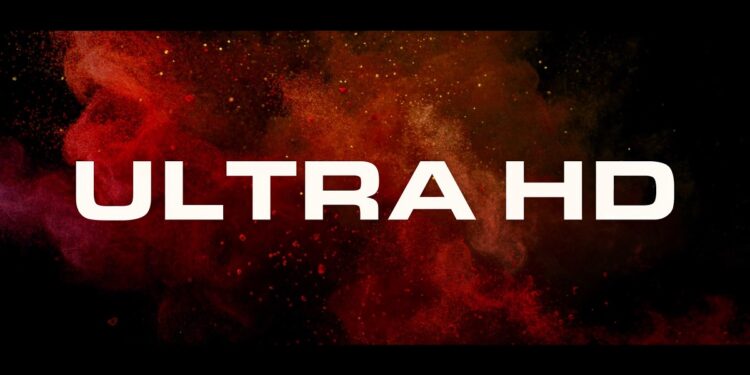 As we mentioned above, the resolution of the UHD specification establishes that both the content and our Smart TV must support at least that resolution: 3840 x 2160 pixels, which if we multiply it gives us the famous 8 million 300 thousand pixels that make up a 4K panel. Therefore, if our television does not support it, it will no longer be able to meet one of the essential requirements of 4K.

On the other hand, another very common question is that of the famous “black gangs” that we can see in multiple movies. This has nothing to do with 4K or its resolution, since it depends on the aspect ratio with which the director decided to record his film. If you look closely, in most cinemas their screens are more panoramic than our TVs, since they use a aspect ratio of 2.35:1 instead of 16:9. For this reason, if we reproduce content designed for that format on our TV, we see the horizontal bands above and below. We can’t do anything, unfortunately. 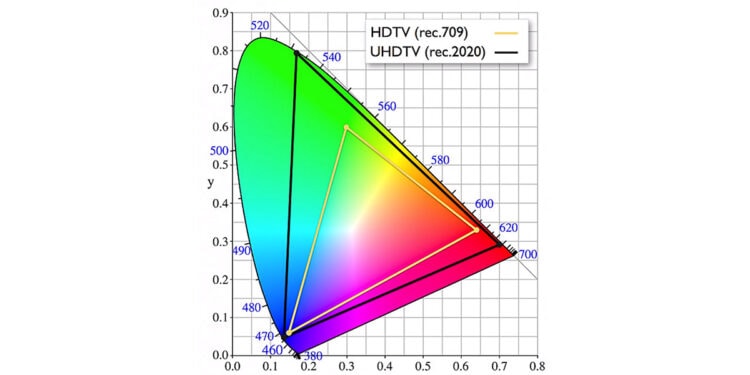 Another of the fundamental points of the UHD specification: color. If you have already been able to play something in 4K (on Netflix, for example), you will have been able to see how the color is much deeper, with many more shades of color and greater richness. This is because in the 4K era a much wider color triangle is used than in the HD (Blu-ray) era, as you can see in the image above.

With Blu-rays, the chosen color space was Rec.709, a fairly limited color space that encompassed a series of colors. If you look at the photo above, you can see how the new color space (Rec.2020, the triangle with black outline) is much wider than Rec.709 (yellow outline), thus being able to see a greater range of colors of all kinds.

Color depth: the step to 10 bits 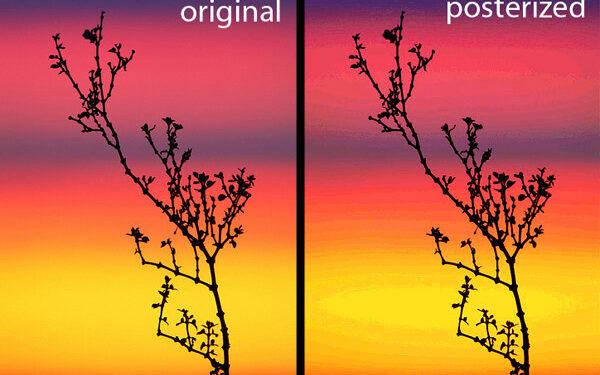 One of the great evils of the Blu-ray and also of the DVD was precisely the color banding and posterization -see photo above-. This defect was caused by insufficient color depth, thus causing those dreaded bands in uniform colors. It is normal, since there were not enough shades of color, the television showed us the content with abrupt changes between very similar colors.

The arrival of the UHD was a revolution in this field, going from the 8 bits used on DVD and Blu-ray to the 10 used on UHD discs and streaming services. With it, we can say goodbye to most complicated scenes with posterization and banding. (not all of them, unfortunately). Many televisions do not natively support 10 bits, being really Smart TV 8 bits + FRC (converts 8 bits to 10 through software calculations), so be careful when choosing your new television and make sure that they support native 10 bits real.

HDR: the true revolution of UHD 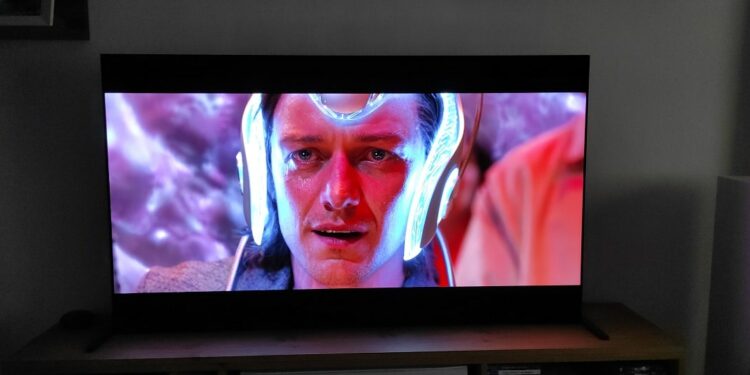 If something has brought 4K, it has been, without a doubt, the spectacular HDR technology, which is what really stands out the most compared to the previous generation. As most of you know, there are 4 high dynamic range formats: HDR10, HDR10+, Dolby Vision and HLG, which we are going to explain in detail here.

UHD content can come in SDR range (that is, we will see the entire film at the same brightness, generally, without differentiating between a very bright sun and a sunset sun, for example) or in HDR (high dynamic range, that is to say that we see the sunlight on our TV brighter than, for example, the reflection of the sun in a puddle of water). In case of coming in HDR, will have to come in the standard: HDR10. And optionally it can also come with another of the enhanced high dynamic range formats: Dolby Vision or HDR10+.

Getting a good HDR effect will depend on our Smart TV and the nits it can give…and here we go back to the beginning of the article, when we talked about the minimums established by the UHD Alliance: minimum of 0.05 nits of black and 1000 nits of maximum brightness in LCDs and 0 nits of black and 540 of maximum brightness in OLEDs . Those are minimum values, if they are exceeded, the better.

To finish, as we mentioned in this introduction, there are several high dynamic range formats, which are the following -although we will do a second article talking about these, tone-mapping, etc.-.

HDR10: HDR standard, MANDATORY that UHDs come with HDR10 (and additionally, they can carry another track in Dolby Vision or HDR10+, but they can never come without HDR10). It shows us the HDR statically, that is, a maximum brightness that a pixel can reach in the film (MaxCLL) and another value that establishes the overall maximum brightness of the scene (MaxFall) are established.

DolbyVision: Proprietary HDR format that is based on HDR being displayed dynamically, that is, there are no maximum brightness and general brightness “points” for the entire film, but rather it is done frame by frame (or scene by scene). scene). It is the format that offers the best quality of all the existing ones in high dynamic range and the most widely accepted along with the mandatory HDR10.

HDR10+: Same idea as Dolby Vision but free, so anyone can implement it on their TVs/players without paying for the license. It is mainly powered by Samsung (and Amazon).

HLG: Identical to HDR10 but for satellite and DTT broadcasts, as part of the code is compressed, it occupies less space, which makes it ideal for this purpose.

In this field of high dynamic range, as we said, more factors come into play to establish what is better and what is not: tone-mapping, clipping, WRGB subpixel saturation or not, nits, supported formats, the content, etc., which as we said, we will explain in another article shortly (part 2).

Conclusion: 4K remains for a while 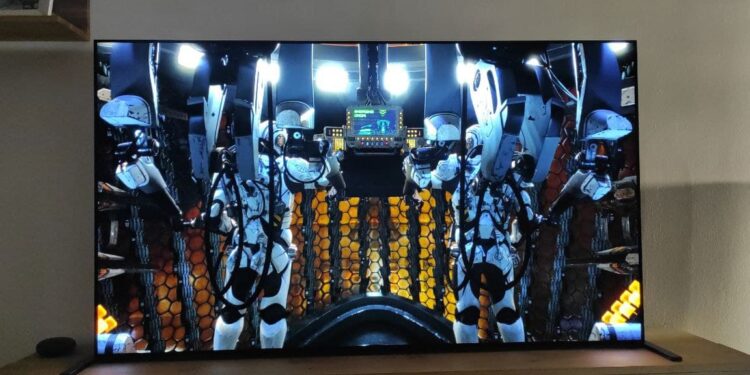 With this we finish this first article of several, which we hope has been able to clarify something about the UHD and how to choose the best Smart TV based on it. In summary, you should choose a television that supports at least 1000 nits (or 540 if it is OLED) of brightness, with a black of 0.05 nits (or 0 if it is OLED), that natively accepts 10-bit depth, native resolution of 3840 x 2160 pixels and that works natively and can show us the BT.2020 extended color space in addition to supporting at least the HDR10 and HLG high dynamic range format (and optionally if it supports Dolby Vision and/or HDR10+, better).

Another question that you often ask us a lot is… is there still a lot of UHD left or are the new 8K televisions going to impose themselves? our vision is that 4K is not for a while, since the specifications of the UHD Alliance standard came out in 2016… and there is still nothing similar in 8K. When they come out, we can talk about the real transition to 8K beginning…at the moment, 4K is left for a while.

a stylish connected watch and headphones that listen to your health

The first impressions of the Sony A95K arrive. Will it be the best TV of 2022?