The pandemic has taken away many things from us, but it has also been responsible for us receiving so many others that at a technological level have brought interesting advantages on a day-to-day basis. One of them are those that have caused the improvement in devices that are essential today: webcams.

After that shortage, the market stabilized and new models were arriving little by little. What’s more, even camera manufacturers like Sony, Panasonic, Canon, Fuji, Nikon, etc., put the batteries in and released software to turn their DSLR or mirrorless cameras into webcams.

However, now new proposals like this from Dell are beginning to arrive that take a step forward and incorporate the use of artificial intelligence systems for things as useful as following you around the scene to keep you perfectly framed in the center of the image.

The Dell’s new UltraSharp Webcam It is a proposal that firstly attracts attention due to its design. This is very reminiscent of Apple’s iSight that the company launched many years ago. A very slim body with the ability to easily change its support to adapt it to a tripod or a system that allows it to be attached to any screen.

Of course, beyond this, what matters are its technical characteristics and how that affects the image quality and the video itself. And here Dell makes a very interesting display of technical capacity, although there is a detail that clashes a bit even though it can be understood. 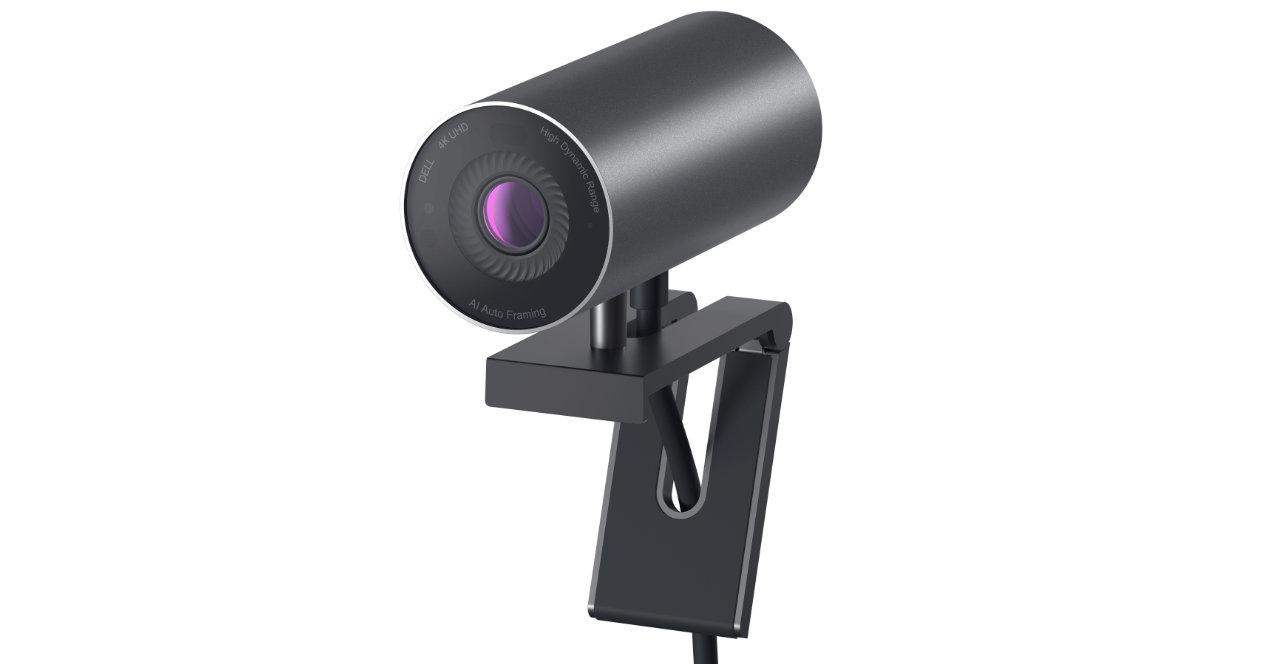 For starters, the camera offers 4K video quality thanks to a 8.3 MP resolution Sony STARVIS CMOS sensor. That allows you, among other video options, to be able to capture content in 4K at 30 or 24 frames per second. But yes, if you want you could also use video at 1080p or even 720p at 24, 30 or 60 frames per second.

If for now this does not surprise you, the new Dell webcam also allows you to modify the field of view between 65, 78 and 90 degrees or use a zoom of up to 5x. Although the best is when the options begin to be known via software that are added through Dell’s own application.

The camera is compatible without the need to install anything on Windows 10 computers or Mac computers, but it is with its software that you get the most out of it. Because thanks to the use of artificial intelligence, you can enjoy a feature like the one offered by the new iPad Pro and its front camera.

Thanks to the use of said AI and the wide angle lens of the camera, the user is recognized at all times and that allows the camera the always be able to focus on the scene no matter who is moving from one side of the room to the other, always with certain clear limits.

In addition to this it also has automatic lighting settings to always achieve the best possible image quality. A quality that we do not doubt is superior to that of the vast majority of proposals on the market. And this is a true high-end webcam, you just need to see its price.

The new Dell UltraSharp Webcam is a camera that competes directly with Logitech’s Brio and other high-end models, even with DSLR-type cameras or similar. This becomes clear when you see that the price is $ 199.99.

A high price that can be justified by that great image quality that it promises, although it is added a small handicap that could make many not understand: it does not include a microphone. That is, you will have to opt for an external microphone to make yourself heard.

Does a webcam without a microphone make sense? For many, surely not, but Dell says that it focuses on the image that is what is really important and assumes that whoever purchases a camera of these characteristics will also worry about having the best possible sound. And that will imply having an external microphone.

Is it fair to compare the Steam Deck to the Switch, PS5, and Xbox Series X?

AVM FRITZ! Repeater 6000: A repeater that marks a major leap