AHCI support is included in Windows operating systems from Vista onwards replacing the old IDE and among the advantages it brings is the Native Command Queuing that allows the hard disk controller to optimize read and write access to the unit by changing the order of requests to it. In other words, in a storage unit if a subsequent request points to a sector of the hard disk closer to the present than the next one then it will advance it.

Another of the improvements and that is very important in servers is the ability to hot plug and unplug storage drives. Which means that we can change them without having to turn the server off and on, which in certain specific applications can be fatal. Imagine, for example, that you have to change the storage unit to a server that controls the traffic and with it the traffic lights of a big city.

How to activate AHCI mode?

When installing Windows, see how we have configured the SATA interface, if it sees that we have it in IDE mode then it will not install the internal drivers to communicate with the storage unit in AHCI mode. Although the access mode can be changed from the hard disk, we must bear in mind that this can lead to a general failure in the operating system. The reason for this is that we have changed the rules with which it has to communicate with the hard disk.

However, it is not necessary to reinstall the operating system to activate AHCI mode, for this you only have to access the command prompt as administrator.

It is important that you access with all the permissions and once inside, type the following on the command line:

What this will do is make Windows start in Safe Mode the next time it starts up again, but before that we have to do a few preliminary steps. Save all your work, close the applications and restart the computer, however, make sure to access the BIOS and from the storage options activate the AHCI mode. 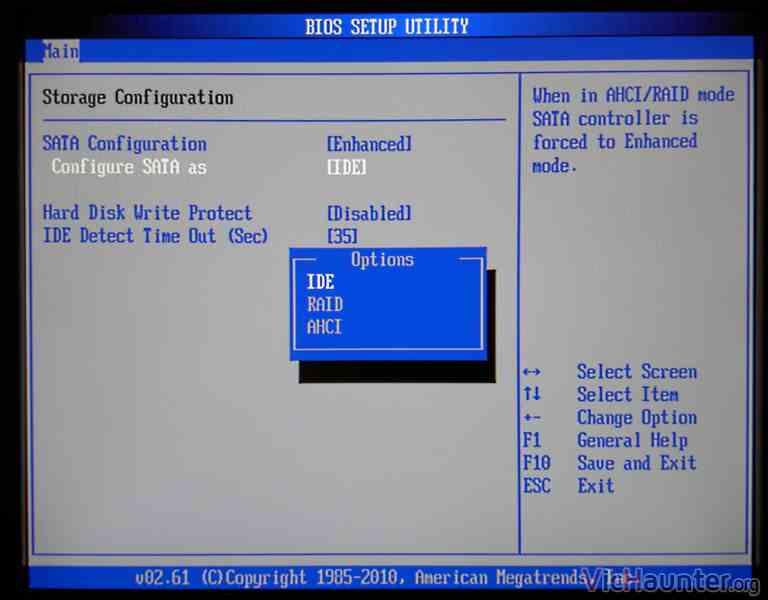 Save changes to BIOS so that they are not lost and you will see that then Windows starts in Safe Mode. As you already know in this mode the operating system loads with the minimum drivers to function and the consequence of this is that it will detect that the AHCI mode is active so it will load them. You have already managed to change from IDE mode to AHCI mode without having to reinstall Windows, however, we have not finished yet that there is no final small detail left.

Access the command prompt again as administrator and type:

Like the other time, do not forget to press the enter key so that the command is executed, with this we deactivate always start in safe mode and you will be able to use AHCI mode in Windows 10.

What is IDE mode for on a SATA drive? Currently, not at all, however, if we have to work with a very old operating system such as Windows XP, keep in mind that it does not support AHCI. There are still many people who use programs on a daily basis that are necessary for their work that were not adopted to later versions of Windows or make use of a very old version of GNU / Linux that does not support it. And speaking of the penguin operating system, unlike in Windows, it will be configured in one mode or another automatically when changing the mode from the BIOS.

So the IDE mode exists for backwards compatibility and is therefore a holdover from when we had hard drives with an IDE interface. Which have been out of the market for a long time. Today it is difficult for us to find a PC that is not configured as standard in AHCI mode today, although you never know and you may find yourself with a surprise, so it never hurts to take a look at the BIOS.

Does it make sense for SSDs? SATA Well, we could say that in theory the advantages of AHCI are less for a solid state drive, since the latency of access to any part of it does not depend on the position it is in. An SSD is not a disk-based drive and is not divided into sectors of different access speeds, so optimizing access according to the position of the sectors on the disk with Native Command Queuing results in nothing, rather a loss time for the SSD Flash controller, but not

However, it does have certain advantages in the SSD and the causes are at least curious, since in a solid state drive it is not the same to access the following memory address, remember that in this they work like RAM, which a another random one. In other words, the AHCI mode can overtake the sequential accesses before the others.

Be that as it may, with the SATA interface with the sword of Damocles on top and with the existence of NVMe SSDs, AHCI mode becomes a thing only for hard drives.

Run Android apps and games on Windows with APK files

Who gave my email to hackers?