As if it were a sticker, AMD has followed the steps that NVIDIA took last week with its Kepler graphics cards within the 700 series and has just wiped out support for an overwhelming number of graphics cards and APUs. The reasons are short and may not convince many users, especially those who have a Fury / R300 GPU, what models are left out of the drivers without support?

The release of the new Adrenalin 21.6.1 drivers is leaving a path of corpses in the most silent way possible: not supporting more GPUs as it was done until now. And is that the launch of FSR has made AMD move to “legacy support” a number of GPUs and APUs with its iGPUs really impressive.

Article Index
AMD wipes out 25 series of GPUs and APUs: from the Fury / R300
A dangerous precedent: reduced expiration of GPU support?

As if it were not the thing with them and in a totally silent way, AMD has put aside no less than 25 complete product series and therefore, the Radeon Adrenalin Software 21.5.2 will be their last available drivers. Therefore, the question you will have right now is if your GPU or APU is on the list, so let’s get to know it because it has a lot of crumb: 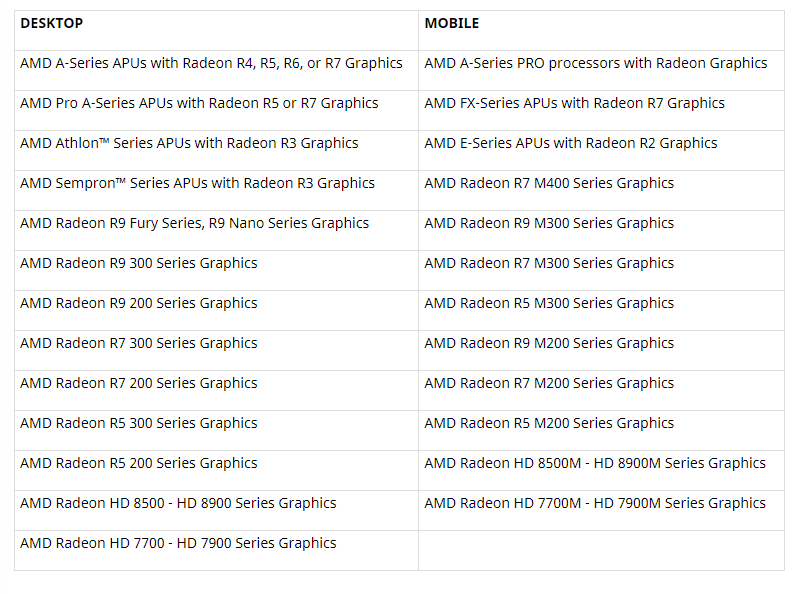 Therefore, and counting, we are talking about GPUs that debuted in 2011 and are now 10 years old, but we must also bear in mind that the R9 Fury and Nano were launched in 2015, only 6 years ago.

This sets a really new precedent, and it is nothing more than reducing the support of a graphics card to just 6 years for the first time in the history of GPUs. The Polaris architecture will therefore be the one that marks the line of support within the 400 series, which like the NVIDIA 900 series are the ones that now have the water around their necks, however surprising it may seem.

The difference between NVIDIA and AMD is one of time, since the former reported almost 3 months in advance of their next move, so many users were able to sell their GPUs and buy a second-hand or even new one if they were lucky enough to keep said. Updated driver support for future titles.

Likewise, AMD has not offered any reason to put aside these cards with architectures as “new” as GCN 3.0, but in exchange for slipping another detail that will piss off so many other users: no more support for Windows 7 64-bit anywhere Company GPU. Therefore, if we want to install new versions of AMD drivers we will have to make the leap at least to Windows 8, so rather many would go directly to Windows 10, although it has little time to live.

Intel vs AMD: the fight for the best CPU changes, so they will be in the future