In order to work with Swift, it makes an IDE, which is nothing more than a collection of tools and facilities that programmers will need for the development and design of the software. They do this by providing an environment on which they can write and test their code. Therefore, if we want to work with Swift either on macOS or Windows we will need a tool that offers us this compatibility

We are talking about an intuitive programming language of Open Source, free and multiparadigm that was created and presented by Apple in 2014. It has been specially developed for design apps for iOS and macOS quickly and efficiently, integrating seamlessly with Frameworks, Cocoa and Cocoa Touch, to be used in any library programmed in Objective-C. This language is available for developers, teachers and students under the Apache 2.0 license.

Swift has been designed to make the task of writing and maintaining programs easier for the developer by supporting inferred data types to make code cleaner and less error prone. This programming language has been intended as a replacement for C, C ++ and Objective-C based languages ​​with better performance results. In addition, it is in constant development, under strict monitoring of the advances that the language is having.

Cross-platform programs to use Swift

Although Swift is a programming language owned by Apple with which to develop applications for macOS and iOS, it does not mean that we cannot use it from a Windows computer as long as we use a suitable and compatible tool.

Atom, one of the most popular editors

We are talking about a free and open source text editor for Windows, although it can also be used on other platforms such as macOS and Linux. It is characterized by having been designed to be used by all types of users, whether they are beginners or advanced. The editor will allow us to organize projects by folders, use several panels simultaneously and compatibility with languages ​​such as C ++, PHP, JavaScript, HTML and, also Swift.

Currently with Atom it is possible to autocomplete Swift code using sourcekitten and build via with Swift build. It also allows us to see a list of compilation errors and warnings, set breakpoints in Swift code, and launch the application built within lldb. In addition, we will be able to pass at breakpoints. In addition, we will be able to interact with lldb using its command line interface.

Sublime Text, has its own package for Swift

It is a text editor for code compatible with a wide variety of programming languages, as well as a markup language, making it one of the best options for professionals. It offers compatibility with popular programming languages ​​such as HTML and CSS, as well as with Swift for Apple, for which it has a well-known package called Swift-Sublime-Package that we must install through Package Control. 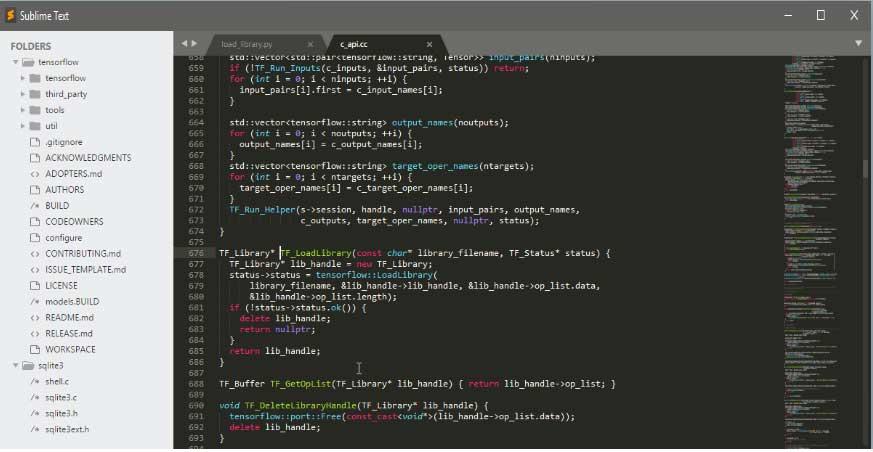 Its main handicap is that it is not the most intuitive application in the world, so its use is especially reserved for the most advanced users, since it is capable of increasing our productivity the moment we manage to master its operation. It has very useful features such as defining syntax rods, highlighting the code, selecting multiple lines or doing a split edit, etc.

We can download Sublime Text from its website, being compatible with Windows, but also with macOS and Linux. We can also access your Swif-Sublime-Package from here.

Microsoft also has its own source code editor called VS Code, which is responsible for offering compatibility with a wide number of programming languages ​​such as C #, C ++, HTML, Java, PHP, Python, SQL and also support for Swift by using a dedicated extension. It includes completion lists, signature help, snippets, quick info, and goto definition. In order to work in the Swift environment, we must install the extension for Swift in its command palette. 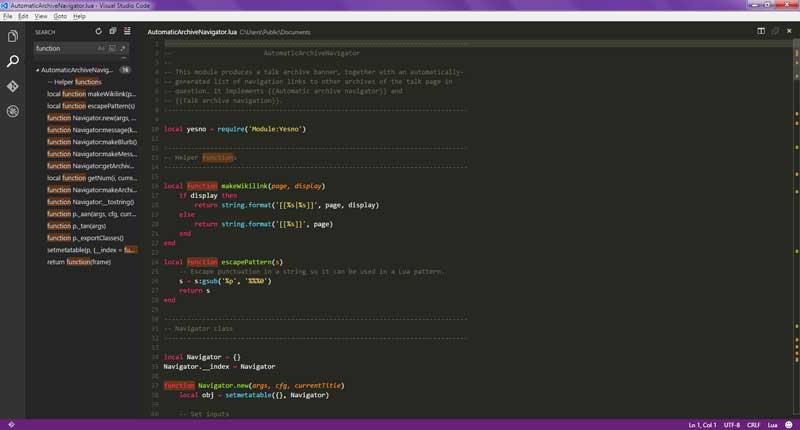 This free editor has several interactive features such as syntax highlighting and autocompletion with IntelliSense, which provides us with intelligent terminations based on variable types, definitions of imported functions and modules, debugging code, difference checking and direct commits from the editor, etc. . Plus, it includes built-in Git control, syntax highlighting, smart code completion, snippets, and code refactoring.

Visual Studio Code is available for Windows and other platforms such as Linux and macOS for free. We can download it from this link.

Swift is a programming language specially designed to work from macOS, its natural habitat. For this we can get hold of some IDEs like the ones we present below.

Xcode, the tool created by Apple to develop and compile

We speak an IDE that has become the development environment for macOS, incorporating a set of tools created by Apple, aimed at developing all kinds of software for the Cupertino company, whether on macOS, iOS, watchOS and tvOS. With this tool it will not be very easy to write Swift code as it provides features such as advanced code completion, code folding, syntax highlighting. In addition, it has an open source LLVM compiler for C, C ++ and Objective-C integrated and available in the Terminal. 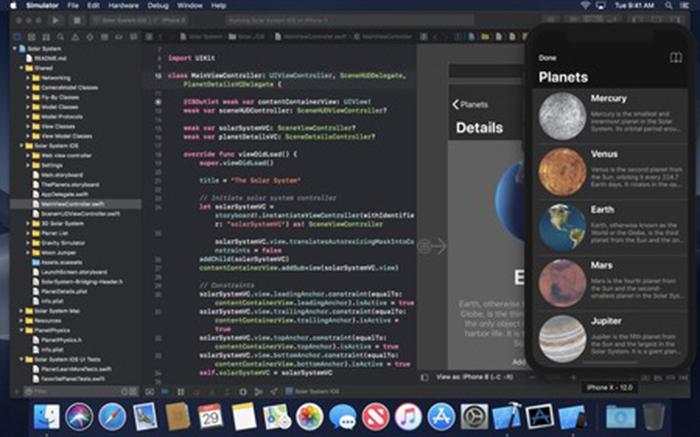 It is no less true that it is not a simple application and it has a fairly high learning curve, but as soon as we get hold of it, we get a very powerful tool in return. It also requires a powerful computer and has performance issues, which is why it has always been in the sights of developers. In addition, its use has become practically essential, since we need it to compile.

We can download Xcode from the Mac App Store by clicking here.

We are now talking about an IDE for the development of Swift, Objective-C, C and C + for iOS and macOS, built on the IntelliJ IDEA platform from JetBrains. It stands out for incorporating a series of very interesting features. For example, while we are writing code, static analysis or all supported languages ​​will take care of each error or display a warning. It will also suggest quick fixes as we write. We will be able to navigate to any class, function or symbol in its encoding quickly, as well as inspect only the relevant uses during the search. 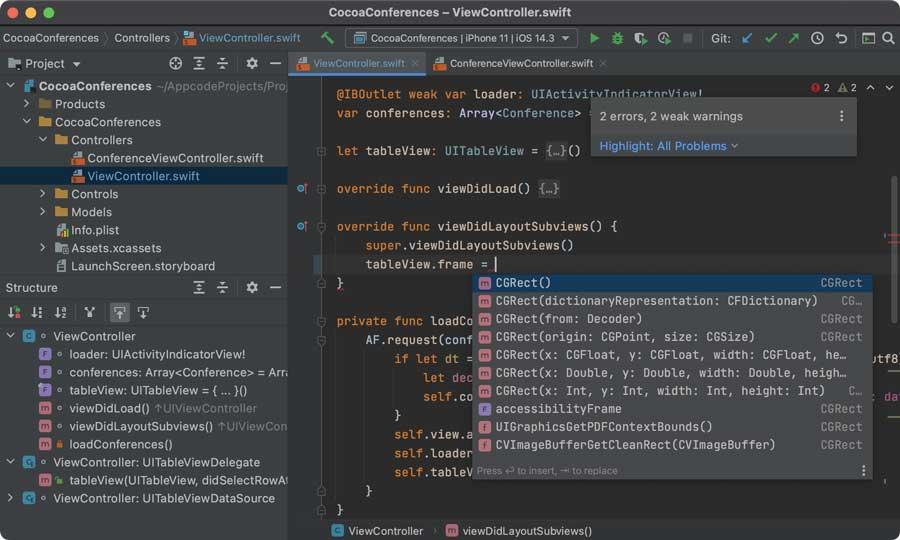 This IDE supports XCTest, Quick, Kiwi, Catch, Boost.Test and Google Test frameworks. Provides a built-in test runner along with a powerful user interface for investigating test results. In addition, it includes a unified interface for the most popular VCS, including Subvercion, Git, GitHub, Mercurial, etc.

We are talking about a lightweight programming IDE for iOS and macOS, designed to support all the most used programming languages ​​and execute them instantly. The app can run code in 25 languages, including fuzzy search, tab-selectable placeholders, and documentation snippets. It also has over 200 syntax modes and many advanced editing features. 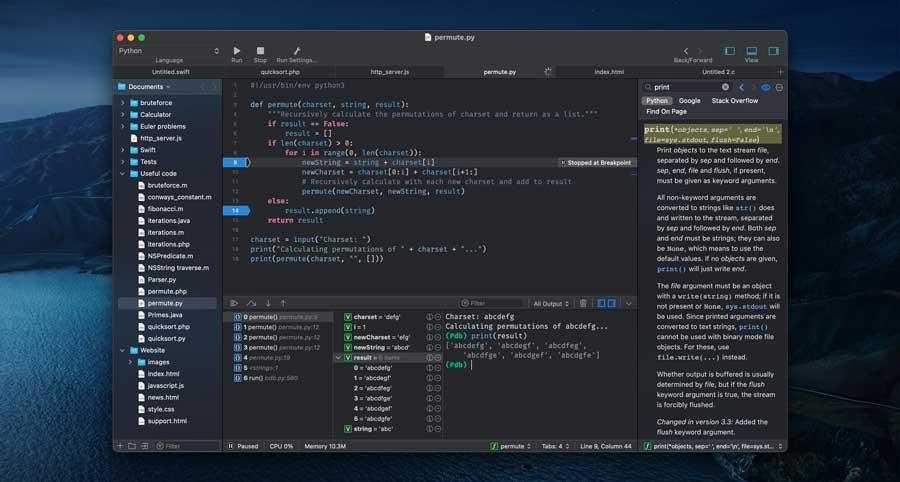 With this IDE we can execute code in languages ​​such as AppleScritpt, C, C #, Go, HTML, Java, JavaScript, PHP, Python, among others. It also allows us to add support for Swift. In addition, it allows us to run multi-file projects without the need for manual configuration.

SCADE, programming for Android and iOS

It is a program based on Eclipse which is responsible for compiling Swift source code into native code using Swift compilers for iOS and Android. SCADE is in charge of building each page of the app as an entity, so that when it is created it automatically generates the .swift file that controls it. Also, it provides a great set of visual controls like web control, camera control, video capture control, map control, etc. 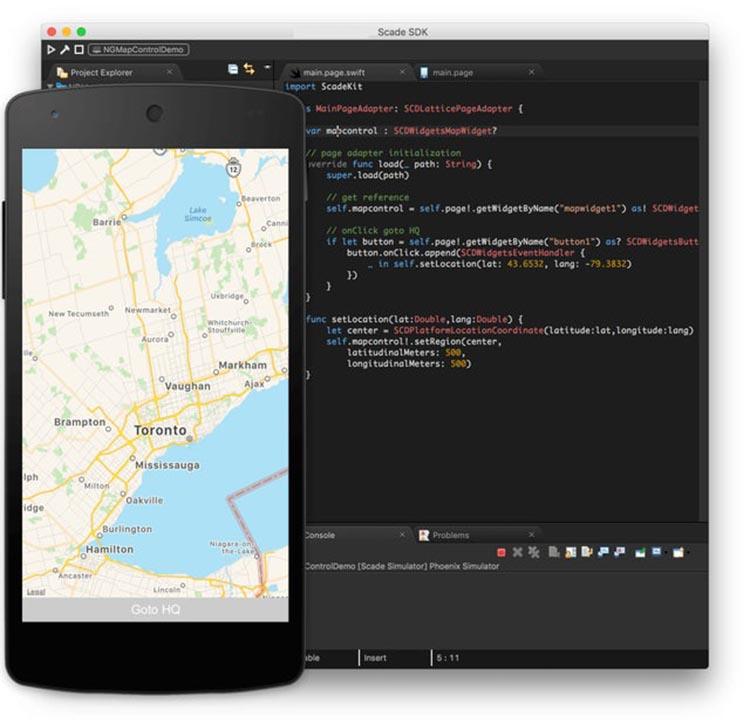 Its main negative point is that SCADE, use your own API, so as much as we know Swift, we will have to study and learn it to take advantage of all its possibilities.

What is the best option for programming with Swift?

As we can see, we have a good number of options to program in programming with Swift, mostly in macOS, although we can also use some multiplatform editors, so it will be possible to program in Windows. Of all the available options Xcode is the one that offers developers everything they need to create applications for Mac, iPad and iPhone. And it is that not only will it allow us to program with Swift, but it will also be possible to compile and send our applications to the App Store. This is something that not all IDEs offer, so surely, even if we use another of the available options at the end, we will have to go through Xcode.

AMD launches its RX 6700, what are the specifications and performance?