Anyone can download Virtual Studio Code, since it is completely free, but without a doubt, it has been designed to be used by programmers. In this field we find many other good options for professional work, especially if we are interested in knowing anything about a program developed by Microsoft.

Visual Studio Code (VSCode) is a free and open source plain text editor developed by Microsoft that has become an advanced programming tool with which to manage the source code of any project and a reference within its segment.

This editor is multiplatform so it can be used both on Linux, macOS and Windows, being extensible through add-ons and capable of managing its entire code base, as in an integrated development environment (IDE). It is written entirely in Electron, a framework that is used by Chromium and Node.js as a desktop application.

However, not everything is good in VSCode. Although this software is open source, it is the same as with Chrome, and that is that Microsoft has included proprietary parts within the code and data collection functions. In addition, we are talking about a software that is not characterized by its low memory consumption, it is not especially suitable for users with little experience and it bears the Microsoft label, which is something that many users back off.

That is why today we are going to collect some of the best alternatives that we can currently find to Virtual Studio Code to carry out programming tasks.

VSCodium, the closest alternative to VSCode

We are facing an open source text editor based on VSCode but preserving all its virtues and offering compatibility with all its extensions so that we can have a similar experience to the Microsoft tool. All Microsoft telemetry and other tools like the C # code debugger have also been excluded, so we’ll get a cleaner app.

This excellent editor has built-in support for JavaScript, Git, TypeScrit, and Node.js and is compatible with more than 100 programming languages. With it, we will be able to debug the code directly and it allows syntax highlighting. Through the use of plugins, we will have support for C ++, Go, Java, C #, PHP, Python, etc. Its main drawback is that it has limitations at the level of updates.

Another great alternative to VSCode is Sublime Text, a software that has become one of the best options for editing text especially suitable for programming, given its compatibility with a wide variety of languages. It has important features such as its ability to highlight code, skip strings or symbols, do split division, and define various syntaxes. 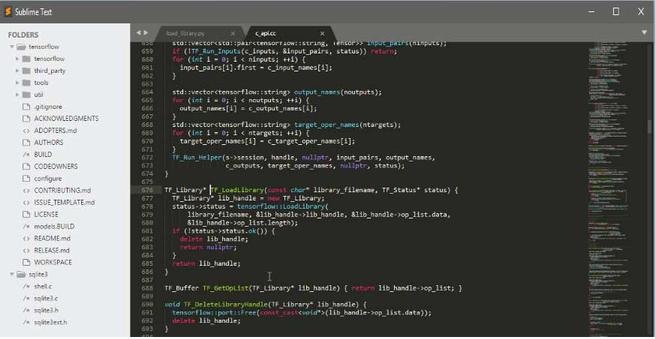 This program has a total customization of the interface and incorporates 23 themes. Although it is an application that can be somewhat complex, it will increase our productivity once we master it. To help us, it has keyboard shortcuts and commands that will allow us to obtain significant savings during our programming tasks.

Sublime Text is a free application, compatible with Windows, Linux, and macOS that we can download this program from its page. It also has a paid version, aimed at users who want to make the most of all its functions.

Atom, one of the most popular text editors

It is a very popular tool among text editors for programming. It is open source and free, being compatible with both Windows, macOS and Linux. Has been designed to be used by all types of users, although it is those with more advanced knowledge who will get the most out of it. 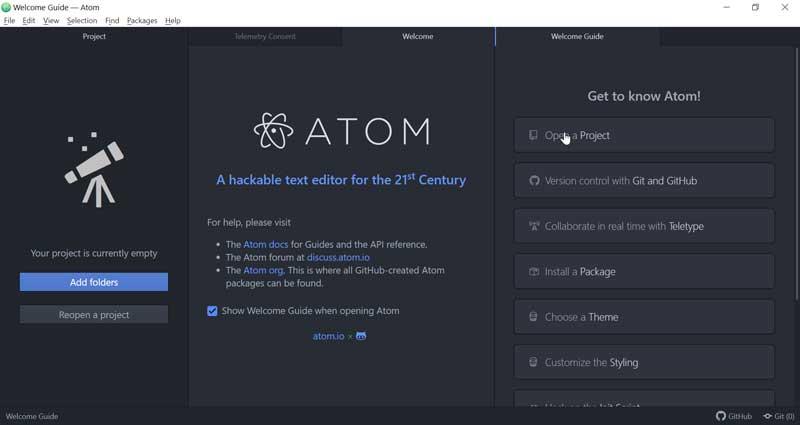 This editor has compatibility with the most used programming languages ​​such as JavaScript, C ++, HTML and PHP among others. Its features include its contextual autocomplete, language autodetection, and syntax highlighting utilities. In addition, it allows us to use different panels simultaneously so it will be easier for us to organize our projects by folders.

We can download Atom directly by accessing this link.

Notepad ++, the ideal editor to carry out programming tasks

Another powerful editor that can be used as an excellent alternative to Virtual Studio Code, since we can perform all kinds of programming tasks. If there is one thing that distinguishes this program, it is because of its simplicity and for being very light, which allows it to be used in all types of computers. So that we do not have problems in carrying out development and programming work, it offers compatibility with various languages ​​such as HTML, Pascal, C, C ++, among others. 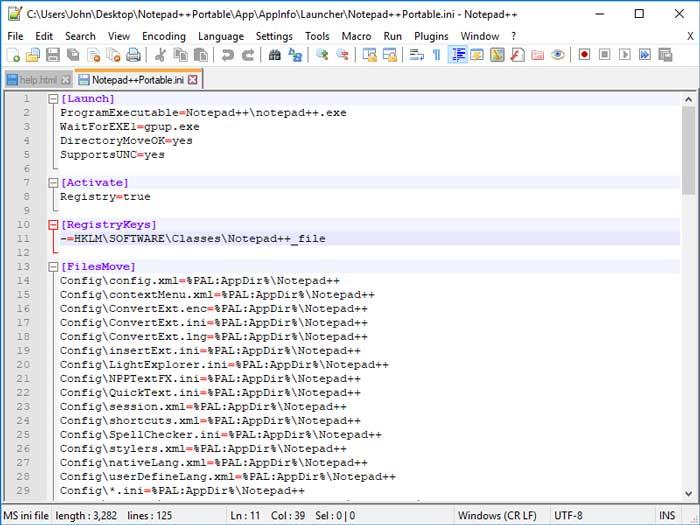 This software is written in C ++ and uses the Win32 API and STL for higher speed. It also offers wide compatibility with plugins, both our own and created by third parties, and we can even develop our own plugins.

Notepad ++ is a free and open source application for Windows that we can download from this link.

When it comes to finding our editor as an alternative to Visual Studio Code, it should not only be powerful, but should also stand out for being lightweight and consume few resources, so that it can be used in all types of computers by programmers. This application offers compatibility with a wide variety of programming languages ​​such as Python, PHP, HTML, Java, etc. 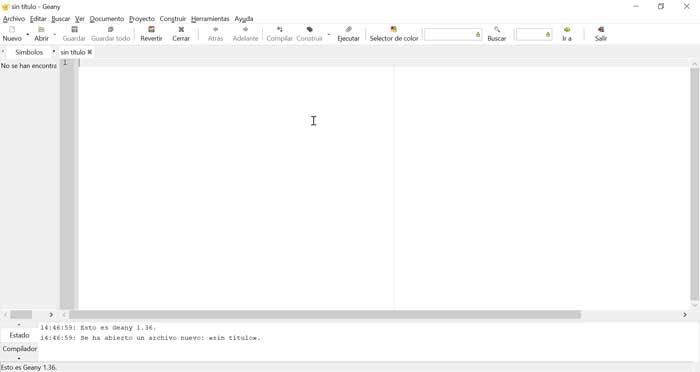 Among its various tools we can highlight that it has code highlighting, keyboard shortcuts, syntax highlighting, XML and HTML tag autocompletion, code completion, and symbol list. In addition, it has plugins, autosave, and file browser and includes support for others for Diff configuration files and SQL files.

Geany is an open source, free and multiplatform tool that we can download by clicking here.

We find a text editor focused on programming that can be a great alternative to Visual Studio Code, since it is simple and easy to use. It is compatible with popular programming languages ​​such as HTML, JavaScript, Python, PHP, among others. It has tools such as a spell checker, abbreviations, macros to create shortcuts, etc. 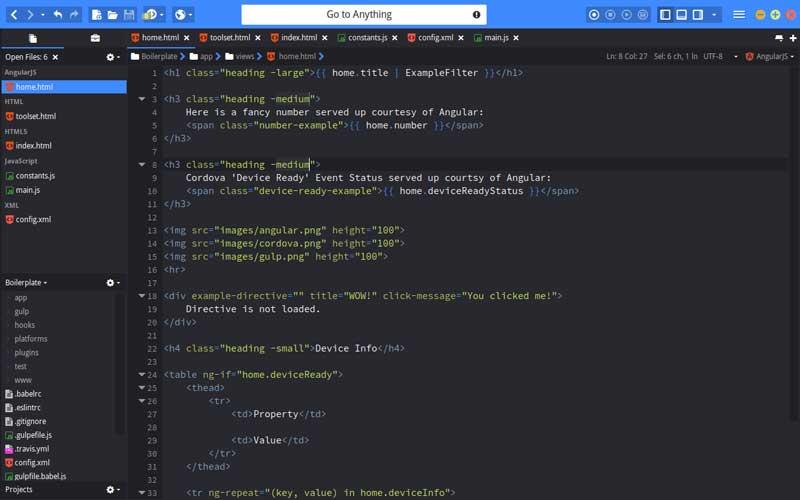 It is a program that will allow us to customize the interface to make it completely to our liking. When developing our website with this application we will have functions that will be very useful to us, such as autocomplete, change tracking and multisection. In addition, we can preview the results from our browser.

Komodo Edit is a free and open source text editor compatible with Windows, Mac and Linux. We can download it from this link.

PSPad, editor to work with several documents at the same time

We are now talking about a text editor for programmers that can also serve as an alternative to Visual Studio Code. This is characterized by being a simple tool as well as powerful. It supports the use of various programming environments and languages ​​such as C, C ++, HTML, CSS, Python, etc. 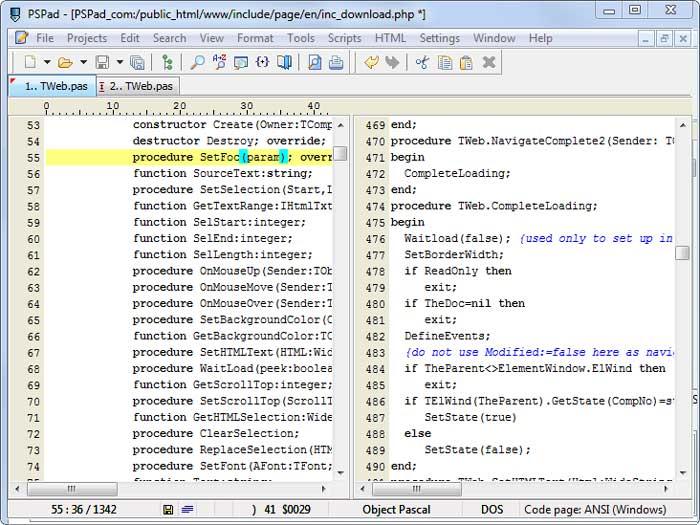 It has interesting features such as the ability to work with several documents at the same time (MDI), text comparison, automatic syntactic highlighting, spell checker and includes a complete HEXadecimal editor. In addition, it allows intelligent preview of HTML pages using Internet Explorer or Mozilla Firefox.

Which editor to choose as an alternative to VSCode?

As we have seen, we have a good bunch of options that we can use as an alternative to Visual Studio Code, in case we do not want to use the Microsoft tool. When choosing between one or the other, the ideal is to take advantage of the fact that they are free to try them, so that we can see first-hand, which is the one that best suits our needs.

When recommending an alternative above the others, this would be VSCodium. Not surprisingly, it is developed through VSCode’s free software, but eliminating certain parts and disabling telemetry by default. In this way it is compiled almost completely, to such an extent that we will not be able to notice differences with respect to Microsoft software.

Can you play Uncharted on a PC from 4 years ago?

Forget Steam to play on Linux thanks to this program