In addition, the program as such presents us with an enormous amount of functionalities that allows us to manage and customize the downloads here as much as possible. It must be said that the client as such can be downloaded from the official website of the eMule project.

How could it be otherwise, the program as such presents us with a good number of interesting functions that significantly improve our user experience. Among many other things it allows us to carry out the direct capture of e-links, update the server list, set download priorities, etc. At the same time, we can customize the bandwidths and seed limits, the folders to use, servers, web cache, access to performance statistics and much more.

In addition, we can use various tricks to improve its operation, both in uploading and downloading content. At this time when we install it in Windows, the program itself asks us if we want to allow its operation within the rules of the Windows firewall. Obviously, we usually do it like this, but that is not all. The corresponding ports of our router are also interesting, depending on the case, in order to optimize both incoming and outgoing connections. How to download and install eMule Plus on your PC

We have already told you before that this is a customer for P2P networks that has been with us for a good number of years offering its services. Since its inception it has evolved to a great extent, we are talking about the beginning of the century. But at the same time and over the years we have had at our disposal various variants of this powerful program. Specifically, here we are going to focus on one of the most popular that was very successful at the time. It is likely that many of you find it very familiar eMule Plus.

Here we refer to a variant or modification of the eMule original of which we have spoken previously. It should be noted that despite the fact that this version of which we are talking about has not received support for several years, at the same time it adds improvements of all kinds. Many of them focus on improving the user experience when sharing all kinds of content via P2P. What we must be clear from the beginning is that it is a client currently in disuse. The main reason for all this is that the project was abandoned a long time ago and also the kad network is no longer used. However, the users more nostalgic and who want to remember bygone times, for many who are happy, they can still download eMule Plus.

From here we will obtain a conventional executable file that we store in any disk path, for example, on the Windows desktop. Assuming that eMule focuses on exchanging files with users on the same network all over the world, this proposal is very similar. Using eDonkey, eMule Plus also allows us to download large files very easily and reliably. In fact, we could say that the configuration parameters we use here are very similar to those of the previous case.

You have to know that over time, in addition to eMule Plus, many other mods or variants based on the original eMule have appeared.

Differences between eMule and eMule Plus

If we start looking for the differences between the two clients for P2P networks, we find several. Not in vain eMule Plus at the time was launched as a more modern and advanced version of the original customer. With this variant, what I try to do is make available to users a more intuitive and easy-to-use software thanks to certain changes in its interface. But that’s not all, since at the same time its developers announced a product that is much more stable and reliable in terms of its operation. 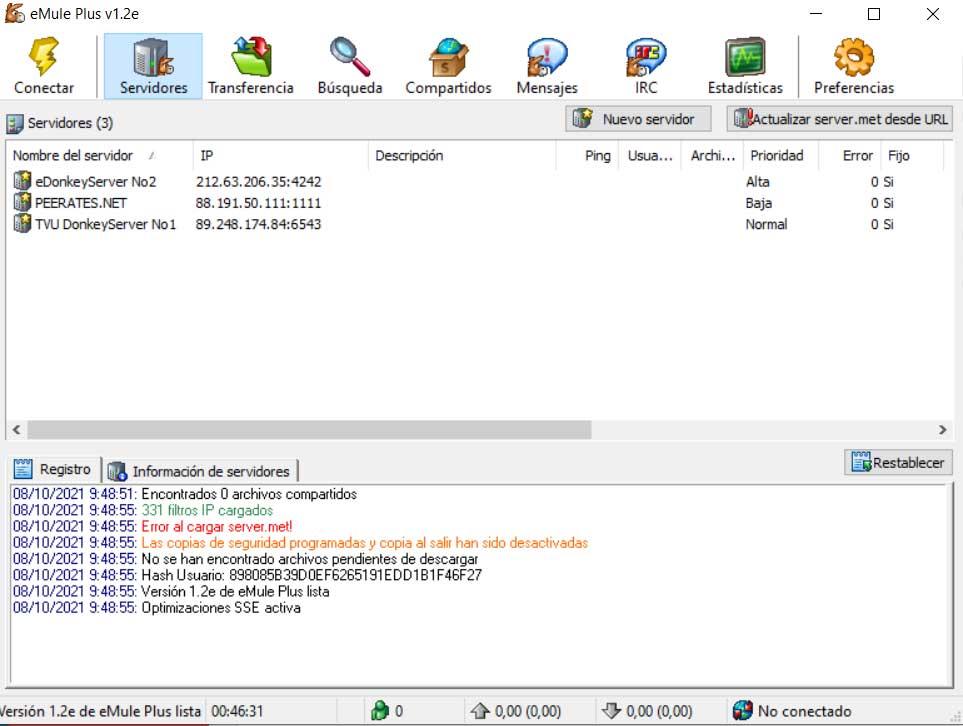 Keep in mind that these are applications that sometimes are or have been running constantly for many hours or even days. Many users left them downloading on their computer completely unattended, since some downloads or uploads took several days. Important that less than demanding a software that did not crash or shut down suddenly. This is precisely one of the objectives that we wanted to cover with this new version. At the same time its developers included some other additional functions to be able to adapt and customize the program.

Among its improvements we could highlight, in addition to the aforementioned Interface, a web server to control the client remotely, support for files of up to 512 gigabytes, a more advanced and complete file preview, etc. Likewise, we found a new, more intelligent algorithm with which we wanted to speed up the downloads.

Which P2P client should we choose from the two

Although the original client to download and share files via P2O, eMule, has been the one that has gained the most popularity, it does not mean that it is the best. Over the years, as we mentioned before, other more advanced and modern clients based on it have come out. This is precisely the case that we have talked about in these lines with eMule Plus, a more careful and powerful alternative that for all this is the one that would interest us the most.

To all this, we can add that it has a a little more intuitive interface and affordable for those users who do not have much experience in these subjects. Therefore, when in doubt, the decision is quite clear, and it is that being both free, eMule Plus becomes a more interesting proposal in every way. Of course, at the same time we must bear in mind that the differences are not going to be too important.

In addition, at the moment, in the P2P network sector, we can also draw on other clients who use, for example, torrent networks, which are more current at the moment.