As the lightest laptop in its class. This is how the Portégé X30W is presented, the new ultralight from Dynabook, which has the most demanding professionals and “travelers” in an audience to conquer. Weighing less than a kilo (989 grams) thanks to a chassis built in magnesium and a thickness that goes down to 2 cm (179 mm), Dynabook puts in our hands a 13.3 “touchscreen computer equipped with practically everything we may need in this new” hybrid world “, in which to work in the office It is joined by working at home and increasingly, in mobility environments.

And what does it promise us? Not only being so light that we hardly notice that we carry it with us when we travel, but also that thanks to its certification MIL STD 810G, we will work with a laptop capable of resisting without disheveled, sudden changes in temperature, exposure to salt or sand, vibration, low pressure support, resistance to rain or humidity and many more. And to falls? Well, the manufacturer does not guarantee us anything at this point, but considering both characteristics (the flexibility of magnesium and MIL STD 810G), we should not have reason to worry if the fall occurs with the laptop closed and a meter or meter and a half of height.

But in addition to being resistant, there are two other qualities that we ask of a laptop like what Dynabook gives us in this Portégé X30W. The first, that you have a autonomy that allows us to almost completely forget about the charger. The second, that this ultraportability does not imply great sacrifices in the field of performance.

Autonomy for a day of work or more

Let’s start with autonomy. The ex-Toshiba promise us in an ideal scenario (you know, in that one in which we can practically not touch the computer), the power to stretch the battery up to 16 hours. As it could not be otherwise, we take this figure with tweezers and loaded with caution, since experience indicates that the synthetic tests that measure the useful life of the battery have little to do with the normal use that we are going to give to. our team.

In this case, in fact, our tests leave the autonomy of the Dynabook in ten hours (somewhat less if we use video), which is not bad if we take into account that some of the most popular tablets on the market do not offer us that much . But if ten hours are too short, we have the advantage that this equipment incorporates fast charging technology, which allows us to recover up to 40% battery life, in 30 minutes.

Of course, you can’t have it all… and if we want the battery of a laptop as thin as this to last more than ten hours, some sacrifices are necessary. And the great sacrifice in this case is the screen. That in 2021 a laptop that is sold as premium continues to equip a Full HD screen (1980 x 1080 p.) Is in a certain sense disappointing. Of course, we do not ask for a 4K screen that may not make sense in a corporate team like the one we have in hand, but of course the quality of reading and viewing of content that we already obtain with a 2K resolution would have been very welcome.

By the way, this is the only downside we can put to a screen that, on the other hand, has many interesting elements. First, a matt LEFT panel (Indium Gallium Zinc Oxide) that favors that energy saving we were talking about a few paragraphs ago. And secondly, that part of the savings is offset by a brightness of 470 nits. Both features favor outdoor viewing, while also offering vibrant colors and razor-sharpness from any angle. At the same time, both to the left and to the right it stretches its surface to practically the same frame … while an extra centimeter in its upper and lower part would have been appreciated.

Let’s now turn to performance. One of the first things that catches the attention of the team is that the traditional Intel Core sticker has been replaced by a new one that reads: Intel EVO. Since the eleventh generation of Intel Core processors (that is, the current one), this new Intel certification applies to laptops that, according to the American multinational, meet the following characteristics: quality, speed, mobility and power.

And in this last area, that of power, Dynabook does not disappoint. The Portégé X30W features an 11th generation Intel Core i5-1135G7 processor, 512GB SSD and 16GB of RAM. The set is completed with the new generation of GPUs developed by Intel: Iris Xe. It will not allow us to play next-generation games with maximum detail, but the leap that Intel has made in the quality of its GPUs with this model is more than evident. 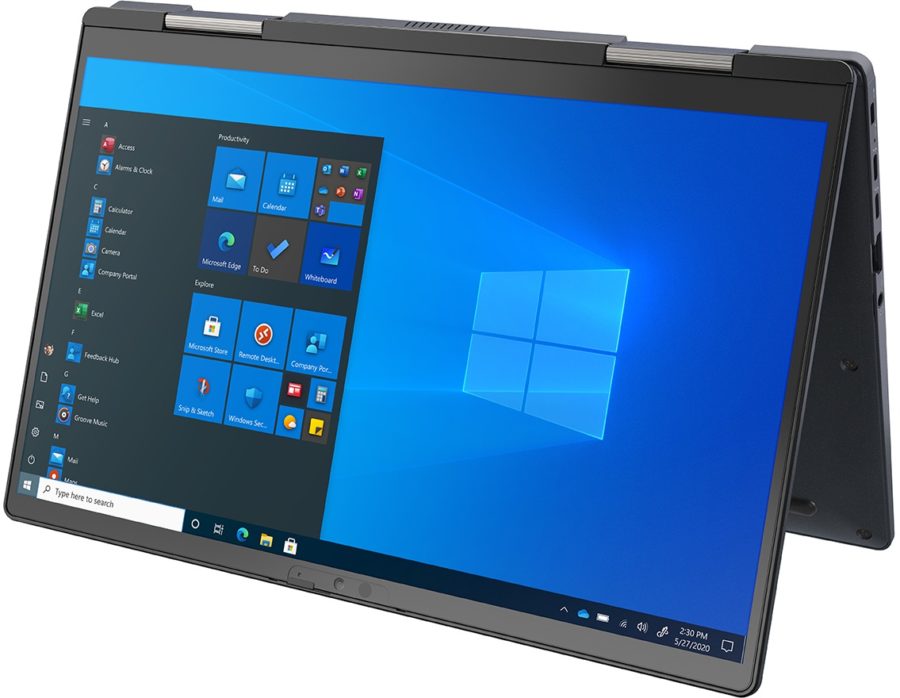 This equation of components assures us of course that we will be able to execute 99% of the tasks that a professional can face with full guarantees, and except for uses that go beyond the role of this team, it is difficult to imagine applications or cases in which that the latest from Dynabook cannot loosely deliver.

That said, it’s important to note that if we’re going to pack such powerful hardware into such a slim chassis, heat dissipation can become a problem. And if, as we suspected, we were not going to take long to hear the fans at the first change, it did not take too long to verify it. Medium intensity work shoots the blades. The good news is that it does so in a way that is certainly quieter than on other computers; the bad news, that it won’t cost us a lot to get into action.

But we said that this was a powerful team and it certainly is in its connectivity options. Its two USB-C Thunderbolt 4 ports are joined by an HDMI connector, another USB 3.1 type A port, Micro SD card reader and 3.5 mm Jack audio connector. To this are added interesting details such as its compatibility with WiFi 6 and Bluetooth 5.1. Finally, highlight an audio section in which it is committed to Dolby Atmos and dual microphones with noise cancellation.

Portégé X30W, in addition to offering the maximum as a laptop, also works well as a tablet, thanks to its touch screen and a great hinges that allow you to rotate the screen completely (360º). To this, Dynabook adds a stylus with which you can take notes on the same screen and that offers an accuracy of 4,096 levels of pressure and 240 pps and that offers great results also in graphic design applications.

To take full advantage of this tablet mode, the company makes a curious decision: in addition to the main webcam (720p, compatible with Windows Hello), the new Dynabook includes a second webcam located slightly above the keyboard’s function keys and whose objective, we presume, is to serve as a camera when we use this laptop in tablet mode. Are many users going to take advantage of this additional camera? Probably not and its inclusion seems to respond more to one of those things that are done, “because we can do it” than as a response to a real need. Dynabook ensures that we can also use it for augmented reality applications but … it does not seem that this is going to be the case for practically anyone. 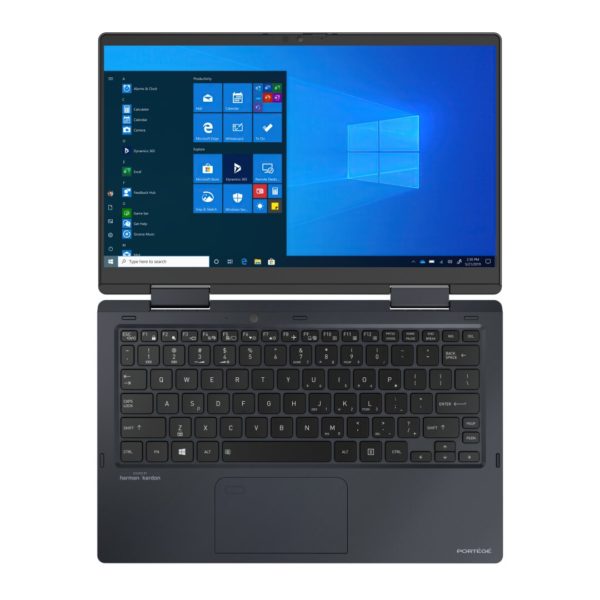 If that secondary camera is going to go unnoticed, we cannot say the same for a really comfortable keyboard for typing with speed and that is not only backlit, but also allows us to define different levels of brightness under the keys. The trackpad, on the other hand, due to the content of the equipment, is somewhat short in size. Instead, it compensates with a good tactile response and the inclusion in the upper right corner of a fingerprint reader for our biometric identification. The same sensor will also serve as a function wake on, which greatly speeds up getting to work again.

The commitment to security and what we expect in a laptop designed for the company is completed with Secured-Core, technology that uses dynabook’s own BIOS to enhance security credentials. In the field of privacy, it should be noted that the main camera has its own integrated shutter.

The Dynabook Portégé X30W offers professionals practically everything they need to function with ease in ultramobility scenarios: autonomy, lightness and performance. And at this point, very few drawbacks can we put on a team that aspires to offer the maximum in all situations.

If it does not always succeed, it is because in that wanting to go all out, in all fields, it requires certain sacrifices. And in this sense, in exchange for a slightly lower autonomy or a slightly higher weight, we would not have minded having a screen with a higher resolution or more efficient heat dissipation.

However, for all those who both aspects (autonomy and weight) are decisive factors when deciding on a computer, then this laptop is a great candidate that also benefits from its extensive connectivity options, a large keyboard and a great tablet mode thanks to its 360 degree hinges.

Hackers claim to have stolen the personal data of a billion people!