The security of 2G is questioned and the non-profit organization that defends digital rights, the Electronic Frontier Foundation (EFF), has asked Apple to follow in Google’s footsteps and close your iPhones support for access to these types of networks.

Google has added in Android 12 an option to disable 2G connectivity. A measure applauded by the EFF, which asks that it be extended to Apple and, in general, to the rest of the software and hardware providers.

The second generation of mobile networks arrived in the 1990s with systems such as GSM, IS-136, iDEN and IS-95. GSM was the most relevant development since it was the European standard for digital mobile telephony. The project involved 26 European telecommunications companies and in 1992 the first European GSM-900 networks and the first GSM mobile phones were launched.

In addition to Europe, GSM ended up also prevailing in Asia, Latin America, Oceania and a part of North America. Its potential access is estimated at 5,000 million users. The need for higher data transmission speeds and greater capacities that would allow new services gave way to the third generation 3G, but not before going through the 2.5G that GPRS provided. The European standard is UMTS based on W-CDMA technology and is managed by the 3GPP organization, also responsible for GSM, GPRS and EDGE.

The popularization of mobile phones would have been impossible without the standardization, improvement and evolution of the protocols for communication networks and their support by the operators, but the one that concerns us It is a very surpassed norm in all senses. And insecure.

EFF has been trying for a few years to get manufacturers to turn off the tap and once Google has started to put a stop to Android, EFF is focusing on Apple: Hey @Apple, 2G is an outdated and insecure technology! Google just gave us the option to turn it off on our phones and now it’s your turn!”.

The problem is that 2G is very old and it’s a lot like connecting to a Wi-Fi hotspot protected by WEP – security is outdated so communications are very easy to hack As the organization explains:

«There are two main problems with 2G security. First of all, uses weak encryption between tower and device that an attacker can decrypt in real time to intercept calls or text messages. In fact, the attacker can do this passively without transmitting a single packet. The second problem with 2G is that there is no tower authentication with the terminal, which means that anyone can seamlessly impersonate a 2G tower real and a phone that uses this protocol«.

Some countries like the US, Canada, Japan, South Korea and Taiwan have long since left out 2G. However, inexplicably, Europe will not close the tap until 2025. Some South American countries will maintain the standard until 2024 and in the African region there is simply no scheduled closing date.

At the user level and depending on the terminal and version you use, you can try to disconnect it in Settings> Network and Internet> SIMs or Mobile networks. And we say try because the operators can block the SIM so that you cannot deactivate the 2G or the terminal manufacturers have not enabled the Google function. 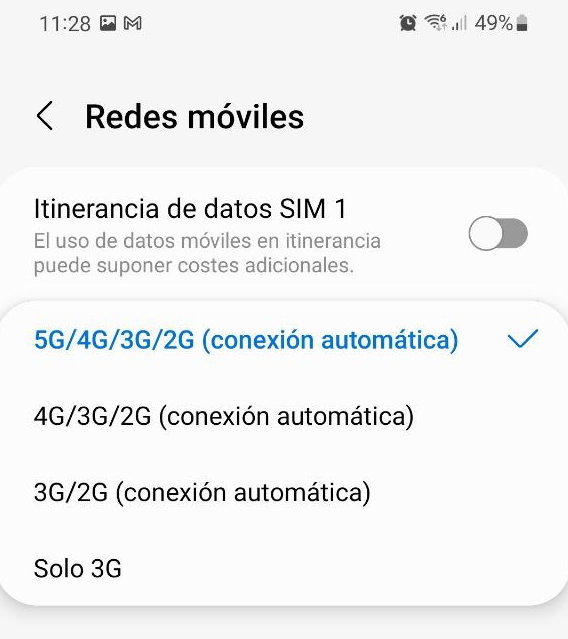 The previous image, in Europe with Vodafone and a terminal as modern as a Galaxy S21 updated to Android 12, there is simply no option to eliminate the use of 2G. Of course, its use must be minimal or null. In any case, as we said above, it is a completely outdated standard, obsolete in terms of security and capacity that we would only use in an emergency in some areas of the planet. If you can disable it, better.

Half-Life 2 remasters will come thanks to fans

PSG OM: how to follow the classico in streaming?