A study by two social network experts claims that the number of fake accounts on Twitter is considerable. It greatly exceeds the figure announced by Twitter during the presentation of its results. According to the document, this figure is close to 20%. Elon Musk put the takeover of Twitter on hold after the social network’s announcement.

On social networks, the number of “followers” or subscribers is very important. Indeed, influencers and public figures rely on this figure to show their importance. For example, influencers market marketing campaigns more expensively (product placement, sponsorship, etc.) because their audience is potentially large. It’s like the ratings for a television channel or the number of page views for a site.

So imagine that this indicator is false. It’s the whole system of influencers that is shaken. It is common knowledge that this indicator can be “manipulated”. Some influencers “buy” followers to inflate this indicator. Two goals: better sell the audience and attract followers. Because it inspires confidence in real users. You are more likely to follow a highly followed person than a complete stranger. It’s logic. Obviously, who says “buying followers” ​​also says “fake followers”.

Fake accounts therefore exist on social networks. They are not just robots for marketing purposes. It can also be bots whose purpose is to send spam to my users (with all that spam can involve like scams and theft of information or money). During the last presentation of its results, Twitter announced that this phenomenon was marginal and involved less than 5% of accounts. Which angered Elon Musk who suspended the takeover of Twitter. 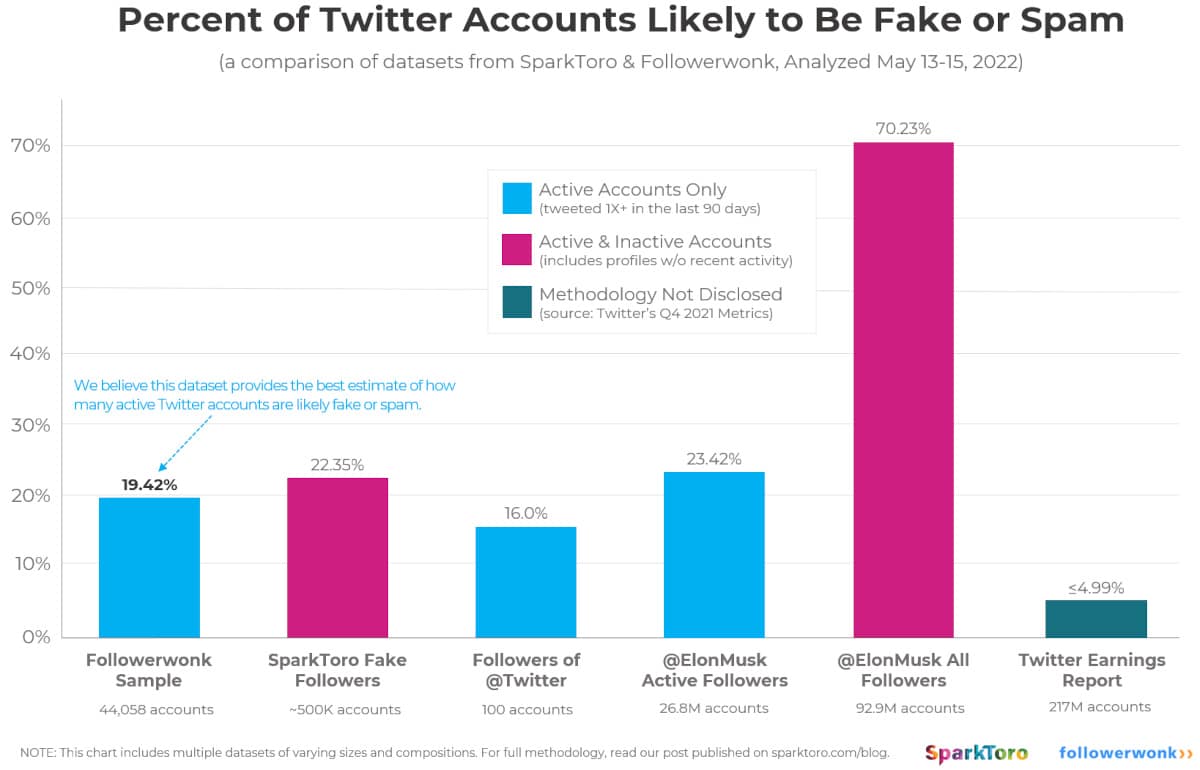 Following this, two experts in Twitter account analysis, SparkToro and FollowerWonk published a study on the percentage of fake accounts. And the figure is much higher than that of Twitter. In effect, it reaches 19.42%. The study is based on several indicators, such as the age of the account, the presence (or not) of a profile photo, the presence and length of the biography, the number of messages sent, the recency of the last message , the number of accounts followed or the location of the account.

More than 7 out of 10 subscribers to Elon Musk’s account would be fake!

More than a dozen indicators are thus crossed and analyzed. And, according to the two experts, the number of fake accounts would therefore be four times higher than the declarations of Twitter. Also, Elon Musk’s percentage of fake followers would be considerably higher: over 70%. Experts explain that emblematic accounts like that of the Tesla boss are prime targets. Of course, there can be false positives in this calculation. The authors of the study admit that they only count the visible activity of an account and not the simple connection. And that’s what we hope for Twitter.

GTA The Trilogy Definitive Edition: where to buy it at the best price?

Acer introduces its TravelMate laptops with Windows 11 for Education