For more than a year, rumors have claimed that Apple has been testing prototypes of foldable iPhones. A new leak confirms this information, but also specifies that Apple plans to not market any device for the moment. The technology would not be mature enough. And the firm prefers that Samsung wipes the plasters before launching.

You will therefore have noticed an increasingly marked trend at Apple to the absence of risk taking. Apple’s latest real revolution in smartphones is the arrival of a 64-bit processor well ahead of all others (Qualcomm and Samsung included). It was the A7, the SoC which then equipped the iPhone 5S. It was… in September 2013. Moreover, you will have noticed that Apple made an equally good impression at the end of 2020 when the MacBook M1 was announced. Impression which was confirmed during our test of the MacBook Air M1.

No foldable iPhone launch at Apple even if working prototypes exist

One of the trends for 2021 was flexible screens and adaptable form factors. Whether in telephony, with the Galaxy Z from Samsung or the Find N from Oppo, or in IT. This trend will clearly strengthen this year. We already know that Honor will officially present the Magic V, its first competitor of the Galaxy Fold. And there is no doubt that other brands will do the same. Except Apple. This is not a surprise, since recent rumors claim that a commercial product will not arrive until 2024, when the firm appears to be working on the subject for more than a year and a half. 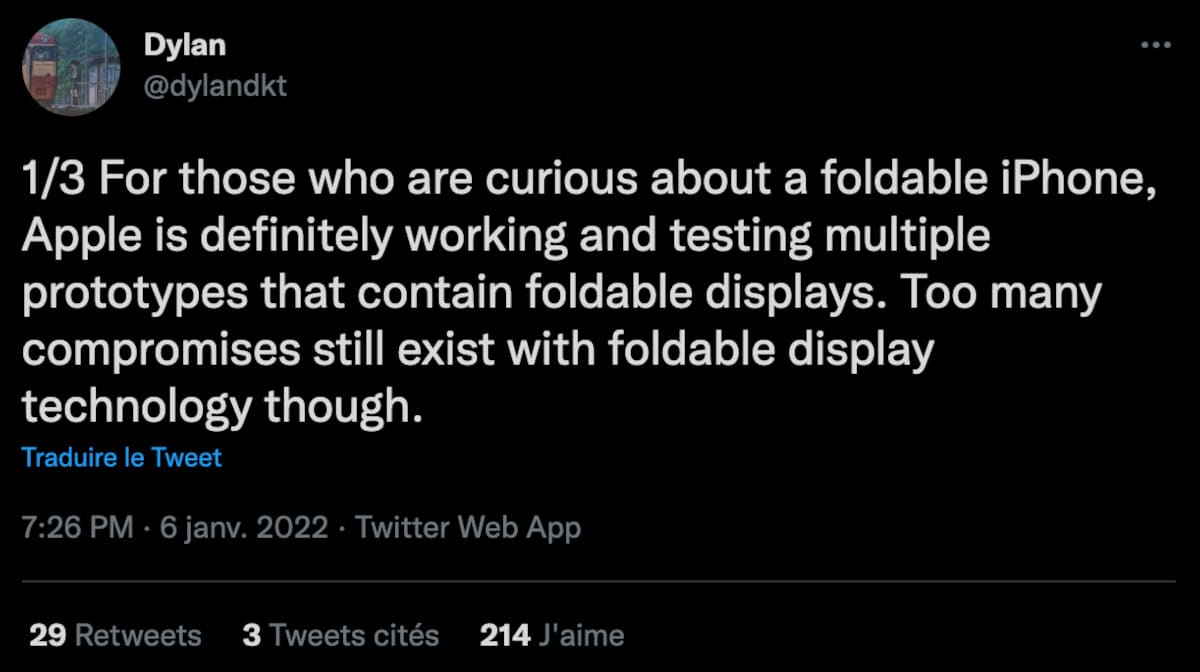 But a new leak that appeared on Twitter this week goes even further: Apple is reportedly not planning to launch a foldable iPhone, either in 2024 or after. Depending on the source of this indiscretion, the company prefers, as for 5G or fingerprint readers under the screen, let the competition wipe off the plaster (technical and commercial) of this new technology before considering a product launch. And this even if several folding iPhone prototypes are indeed present behind the closed doors of the HQ of the company, in Cupertino.

The main argument for this decision is simple: technology does not yet deliver an experience to match the expectations of Apple customers. In addition, officials would not be convinced there is a real market, despite good sales figures at Samsung and studies showing that the volume of foldable-screen smartphones sold is expected to increase tenfold by 2023.

The first of these arguments is consistent, especially with regard to Apple’s image strategy. Yes, foldable screens aren’t perfect yet. And they certainly won’t be for a few years yet. It is still a recent technology. And we finally have relatively little perspective. Samsung is clearly the company with the most experience in this area. And, even with the latest iteration of the Fold, the Korean firm is not able to offer the same level of service as with a Galaxy S21 Ultra for example: waterproofing, solidity, longevity, image quality, etc.

For us, this argument is a good argument. But it is also this kind of argument that has led Apple to no longer surprise, to no longer take risks. Of course, the products developed by the firm remain (for the most part) qualitatively excellent. And the ratings we gave to all iPhone 13s of 2021 prove it. However, it’s been a long time since we were surprised by an innovation brought by an iPhone… Because there hasn’t really been one since the A7. But we do not lose hope of one day seeing Apple again present an unprecedented technology in a smartphone. And in the meantime, it’s the other brands that will surprise us. Pity.

Google Glass: after the failure, the firm wants to reinvent its augmented reality glasses

What is Web3 and how it can completely change our world