Irremediably, technology is evolving to adapt to the Business necessities; It is not like fashion (talking about clothes) that evolves to what the designers think is good, no, when we talk about PC technology, it always evolves in order to comply with the user demand. And in recent years, what are users demanding? Since the number of hardware enthusiasts is increasing, obviously aesthetics have been one of the most important points, and very especially when we talk about PC hardware.

Cooling, a key point for performance

One of the key points in the evolution of PC cases has been the cooling system; Initially, the boxes did not have fans, and in fact not even the power supplies carried them. However, the hardware has evolved to systems with much smaller lithographs and with higher consumption to be able to deliver more power, forcing PC case manufacturers to adapt to the new times and incorporate cooling into their devices.

Many times we have spoken to you about the importance that today has to study the ideal air flow inside the box so that all the components that emit heat can work at a suitable temperature range, and here the box represents a key point because It is here that we can install fans to bring in fresh air from outside and expel the hot air from inside.

Likewise, the design of the cases had to change and not only to be able to install case fans, but also to be able to accommodate large CPU air heatsinks, graphics cards with advanced cooling systems (since initially they did not even the GPUs had and look where we have come now), and more recently to the large radiators of the liquid cooling systems that we use today almost on a daily basis thanks to the arrival of the AIO liquid cooling kits. 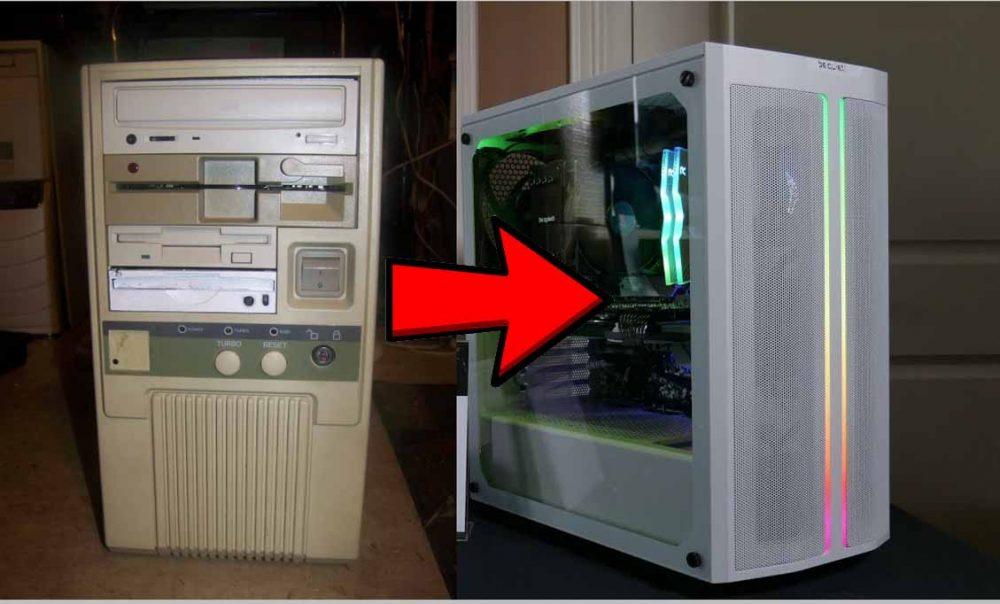 When the first home PCs hit the market, they came with those horrible boxes so uncomfortable to look at that the most common was to place them somewhere hidden under the table or cloistered in the old cabinet that we used to have the computer. In addition, they were not boxes that precisely stood out for their functionality because they were generally prepared for the PC OEM with which they were sold and nothing else, so any repair or hardware change had to be studied and measured with a magnifying glass to avoid problems.

Today things have changed a lot; the boxes have not only focused their design on aesthetics with the intention of capturing attention (and this is one of the reasons why people usually put them on the table and not “hidden”), but also their functionality and versatility is such that in most cases, almost any PC can be mounted in almost any case (with few exceptions with specific hardware that is much larger than normal).

Transparent panels are here to stay

Following this line of “showing off” your PC case, something that was pleasantly increased by the era of “LAN Parties”, there also came a time when enthusiasts not only wanted to show off their equipment case, but also its hardware. And of course, to meet this user demand, boxes with transparent acrylic plastic windows began to arrive that allowed a part of the hardware mounted inside the box to be seen. 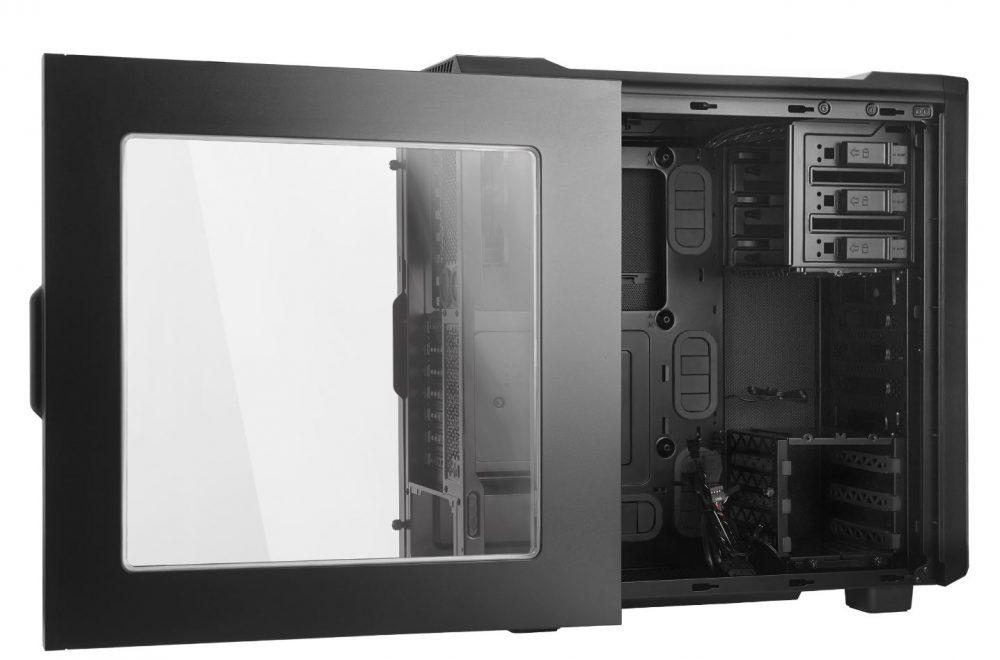 Gradually and with the passage of time, these plastic windows became insufficient for the enthusiasts, and at the same time the manufacturers began to realize that it was not much more expensive comparatively to change the metal and plastic side for a completely manufactured side. Made of very resistant tempered glass that allowed you to literally see the entire interior of the PC.

In some cases this has reached almost the extreme and today we can find PC cases whose evolution has led us not only to a tempered glass side, but also to the fact that almost the entire case except its central structure is made of glass, including both. sides and roof. And this is precisely what brings us to the next point about how PC case design evolved.

RGB lighting, key in the evolution of PC cases

As time went by, the design of the PC cases evolved to want to show the hardware; In the age of clear acrylic plastic windows, lighting was used by means of cold cathode lamps, quite uncomfortable to use, with a large consumption and that really did not look too good. Manufacturers realized this and once again turned the evolution of their PC cases towards what the market demanded: lighting systems. Initially we only saw lighting in one color, but little by little we reached the era of RGB lighting in which today we have up to SSDs with it. 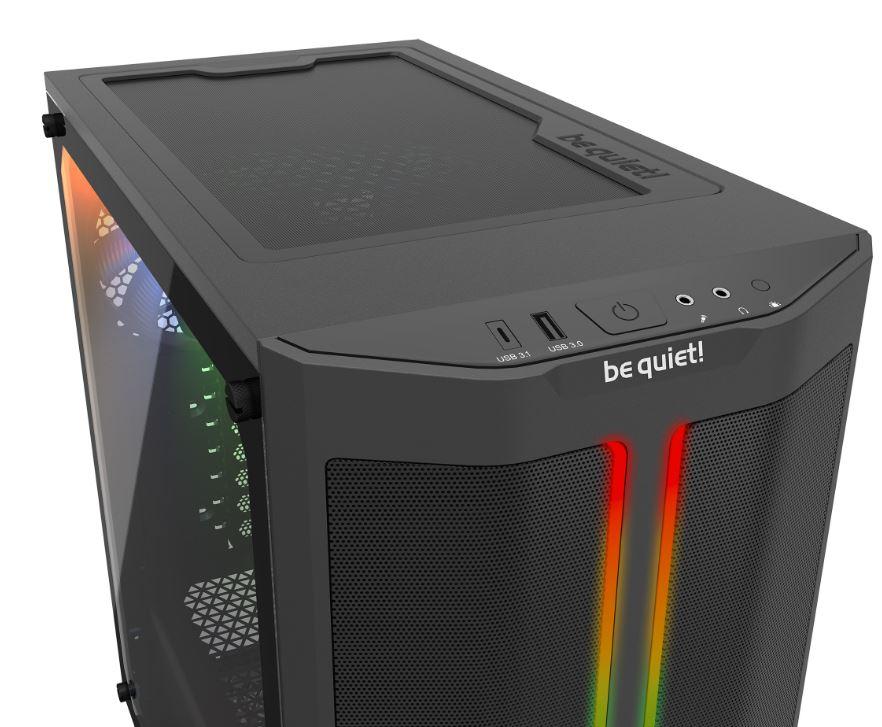 At the other end we have the manufacturer be quiet !, and that is why we have put the image above as an example; It is a manufacturer that prefers to maintain more discreet designs, and although they do not renounce RGB lighting, they do so in a slightly more demure way, preferring to focus their efforts on versatility, performance and silence as its name suggests; Now, if the user later wants to add LED strips or fans with lighting, models with tempered glass have several.

Actually, the issue of RGB lighting in the components is something that has always generated some debate because almost all manufacturers have their own products with this type of lighting and, unless you have everything from the same manufacturer, even if you manage to synchronize colors and effects you will not have a homogeneous system that in the end achieves the opposite effect to the desired one, generating a chaotic environment that looks more like a nightclub than a PC. It is actually a matter of the taste of each user in deciding what they want and what not, but of course RGB lighting is already part of the history of the evolution of PC cases.

Modding has taken PC aesthetics to the extreme

Modding is not something new, but specifically in the PC industry they have taken the design of the boxes to the extreme because as it is the element that is first seen in a PC and given its size it gives a lot of room for maneuver, they have also managed to do it the most colorful. 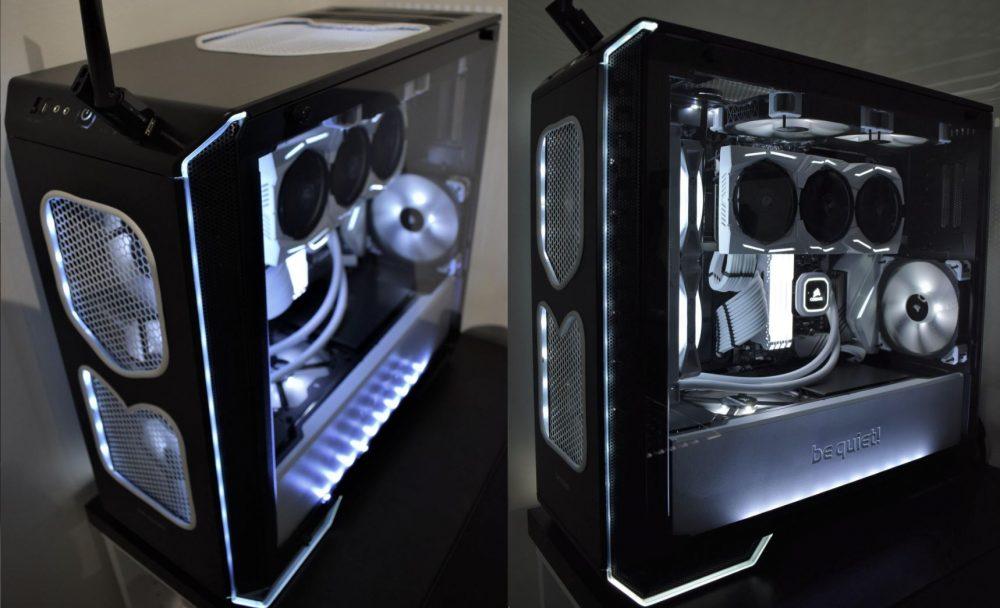 Modding on PC is a clear example that if you don’t like something the way it is, you can always get down to work and change it. And the modding of the 90s specifically is where many ideas and designs that are used today emerged, including lighting, and were to some extent the trigger for the evolution of PC case design.

be quiet !, the practical example of how the evolution of PC cases has been

Nowadays we have gone from those horrible ivory boxes to really very nice and colorful boxes, some with windows or tempered glass and even with RGB lighting as we have already seen, and the objective is to attract the attention of the user, without a place to doubts. be quiet! is a manufacturer that perhaps arrived a little late in the PC case market, but there is no doubt that there is also a lot of evolution in the design of their cases, which started with quite minimalist models to really eye-catching and elegant models. 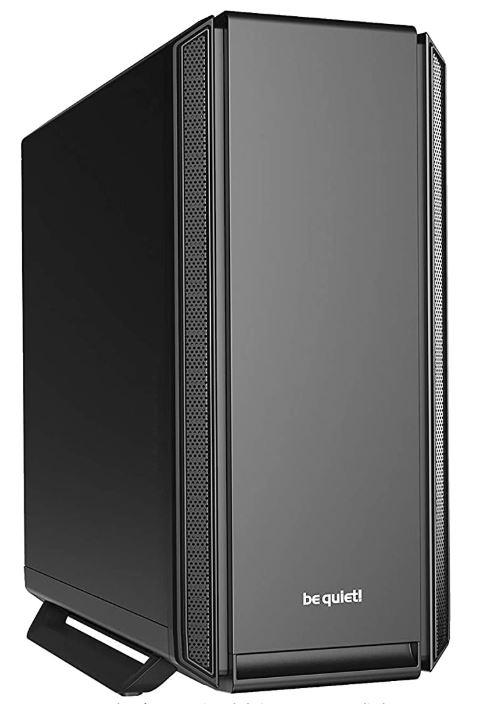 be quiet! is a manufacturer that has always remained true to its design, and despite the fact that it has not been exempt from additions in the design of its PC cases such as tempered glass sides or ultimately even RGB lighting, its evolution has been rather, in terms of performance, functionality and versatility, and it is that today it is one of the most recognized manufacturers for the quality of its products, which are made not only to maintain a low noise level, but also to last .

Not everything is aesthetic: versatility is essential

While it is true that today most PC users (and especially enthusiasts) opt for a case that is eye-catching, in reality functionality is still one of the most important parts of the evolution of PC cases. In the old days, boxes were built for specific systems or standard components, and there wasn’t much room for maneuver when it came to replacing a piece of hardware or making improvements such as adding more fans to improve airflow. 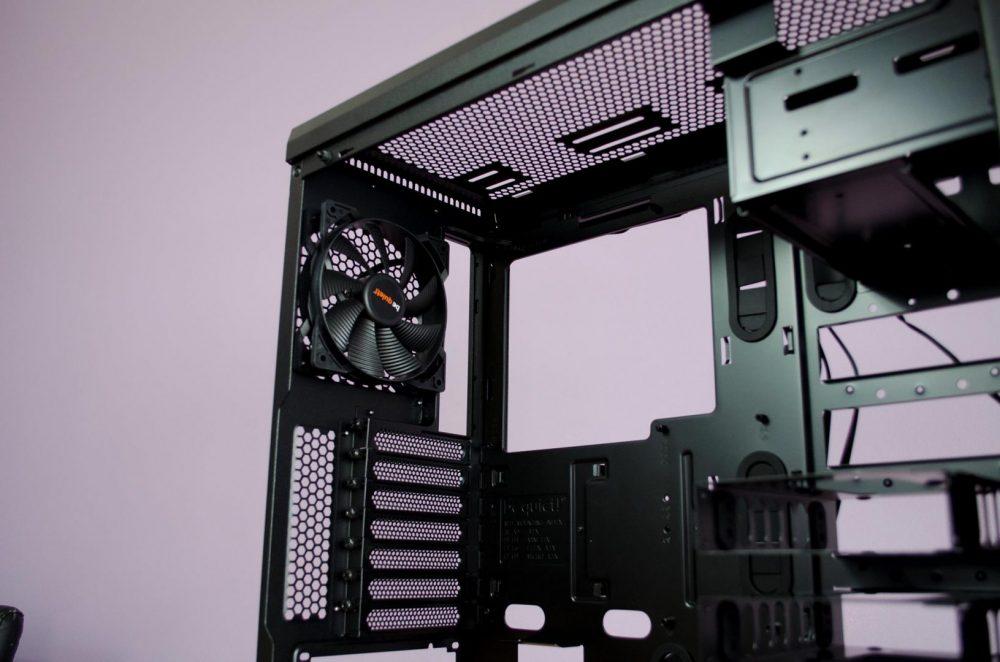 This is a point where current PC cases have also changed a lot, since although there are still limitations, in general terms almost any hardware can be mounted in almost any case. For example, even if you have a PC with an air heatsink, almost all cases have space to install liquid cooling radiators, or if you want to add more storage units, most have modular disk racks that allow you to put on and take off as you please.

Another evolution in PC cases has been the location of the power supply; In the past it was installed on the upper part, and this made the center of gravity of the box very high and that with any blow they would tip over, as well as the fan blowing hot air into the box. Nowadays they are mounted below to improve the center of gravity and so that the fountain can absorb fresh air from outside to keep the fountain at a good temperature.

Likewise, another of the quite important evolutions in this industry has been the inclusion of dust filters in the vents, which aim to prevent dust from entering the inside of the box and ruining our precious hardware. Similarly, another interesting evolution has been the elimination of the 5.25-inch bays, a trend that again has been because it is what the market “asked” since optical drives are completely obsolete today. . 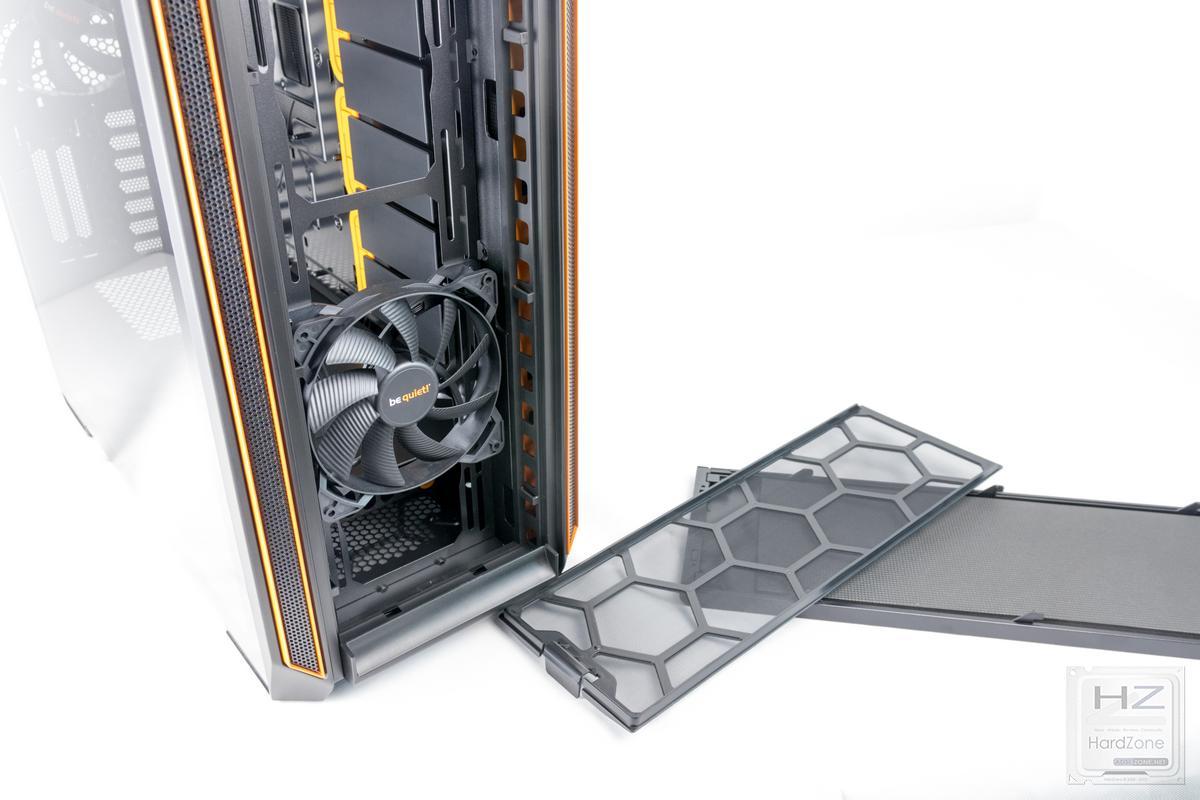 Finally, another aspect that, how could it be otherwise, has evolved along with PC cases is connectivity; In the past, PC cases had nothing more than a power and reset button (well, and Turbo if we go back a long time) but they didn’t even have USB connectors and users had to resort to expansion cards for this. Today there are no PC cases that do not have front USB ports, as well as audio ports for greater user comfort and, ultimately, to have greater versatility.

Zen 3+ CPUs are not enough against Alder Lake Discounts at AMD?