There is no doubt that the brand has become a strong company that is committed to gaming monitors, since it already has an extensive catalog of models of all kinds in terms of sizes, resolutions, panel types, refresh rates and a long etcetera. Its latest innovations are three gaming monitors that seek to satisfy the needs of very similar users, but at the same time very different from each other.

The first of the gaming monitors that Newskill has added to its catalog is the Icarus IC27Q6-V2Z, which is a QHD monitor 27-inch VA type, which provides you with a high quality in the representation of colors. All this seasoned with a soft drink rate of 165 Hz and a response time of 1 ms MPRT, which makes it not only look good, but also ideal as a gaming monitor.

If we focus on the specific specifications of the panel we find that it has a viewing angle of 178º, which is backlit with an E-LED type backlight and being VA this allows it to have a 120% sRGB profile, which gives it to be considered as HDR, also counts as a 4000: 1 static contrast and dynamic of 1 million. As for its ability to shine, it ranges from 300 to 350 nits, which makes it a non-DisplayHDR 400. Newskill knows that you are going to want to use the monitor with your gaming graphics card, both from AMD and NVIDIA, so it does not want to make distinctions and its Icarus IC27Q6-V2Z is fully compatible with both NVIDIA G-SYNC Compatible as well as AMD FreeSync, so you can get the most out of it whether you have a GeForce or a Radeon on your PC.

Regarding the inputs and outputs integrated in the Icarus IC27Q6-V2Z gaming monitor, we have four video inputs, two of them are HDMI 2.0 and the other two are DisplayPort 1.4, To which you have to add an audio output in the form of the classic mini Jack, this being the only way to get sound from the screen, since it does not have built-in speakers. Finally, in case you are interested in mounting the monitor on a VESA mount, the Icarus IC27Q6-V2Z can be installed on a 75 x 75mm one.

At the moment you can only buy it through Amazon. The next on the list is the little brother of the first, since it shares some of the characteristics of the Icarus IC27Q6-V2Z such as the use of a VA panel with a 165 Hz refresh rate, but on a smaller scale as it is a panel with a 24-inch diagonal and Full HD resolution, so we are talking about 1920 x 1080 pixels.

As for the rest of the panel’s specifications, it shares almost the same as those of the previous model such as the 178º viewing angle, the static contrast of 4000: 1 and dynamic of 1 million, the response time of 1 ms MPRT and the fact that it is backlit with an E-LED backlight. Without forgetting the ability to ride a 75 x 75mm VESA mount.

However, it differs in details such as brightness, which ranges from 280 nits to 320 nits and the sRGB color scale which has been reduced to 99.9% and on the way you have lost a DisplayPort 1.4 output, but it maintains the two HDMI ports, although this time due to the lower supported resolution they are type 1.4 and not 2.0.

At the time of publication of this article the Newskill IC24F6-V2Z is ​​available only from Amazon. The third model, unlike the other two, makes use of a curved panel of type 1500R, which is from 27 inches and houses a screen of the type GOES with a Full HD resolution, 1920 x 1080 pixels, and a refresh rate of 240 Hz with a response time of 1 ms MPRT. In addition to that it is compatible with both NVIDIA G-SYNC Compatible and AMD FreeSync. And it is that with such a refresh rate you will want to take advantage of your GPU to play your favorite eSports at the maximum possible refresh rate.

The curved panel of the Newskill Icarus IC27F2-V2Z is ​​of the VA type with a brightness capacity ranging from 250 to 300 nits, a static glow of 4000: 1 and a dynamic one of 1 million. It is backlit with an E-LED type light and has a 99% sRGB profile and an angle of 178º horizontally and vertically. However, it can only reach 240 Hz refresh rate through the port. HDMI 2.0 as video input, since with the rest of the inputs that are 1 HDMI 1.4 port and one DisplayPort 1.2 port you don’t have enough bandwidth for it. Like the other two monitors, it also has no built-in speakers and its only audio output is through a mini Jack. To finish with this monitor we will not be able to mount it on a VESA mount, since it lacks compatibility with them.

You can buy this 240 Hz curved screen gaming monitor only at Amazon. 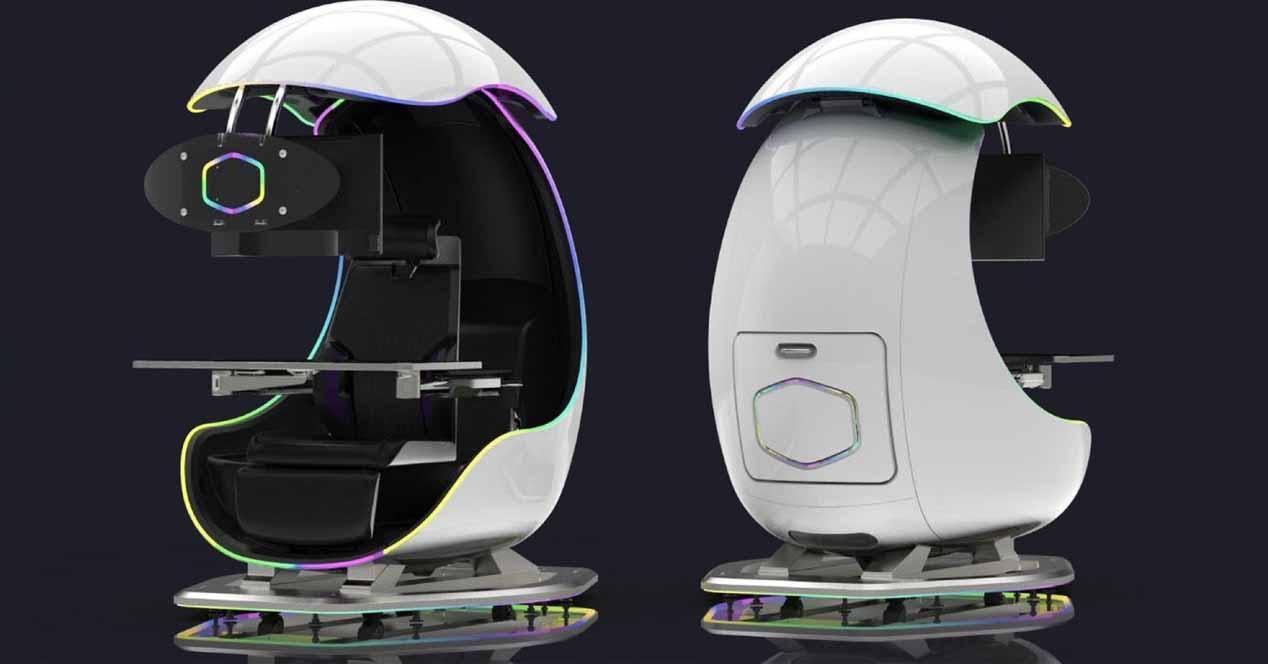 Not from Ready Player One, Cooler Master’s ORB X gaming pod is real

There are three hard drives that fail as little as an SSD, do you know what they are?