Just three days ago the official announcement of the NVIDIA GeForce RTX 3090 Ti, and Gigabyte has already announced its graphics card proposals designed around the most powerful desktop GPU to date. As we already imagined on the day of the presentation, the arrival of the proposals from the main manufacturers would not be long delayed, and without a doubt we are confirming this these days, with proposals as interesting as the two models presented today by Gigabyte.

Specifically, the two cards presented by the company are the AORUS GeForce RTX 3090 Ti XTREME WATERFORCE 24G and GeForce RTX 3090 Ti GAMING OC 24G and, although with some differences between them, in both cases we are talking about two top of the range, which will undoubtedly satisfy the needs of the players, however demanding they may be. And it is that, before seeing what these two Gigabyte cards offer us, let’s remember the technical specifications of your GPU:

The main difference between both cards is found, as you may have already deduced from their names, in that the Gigabyte AORUS GeForce RTX 3090 Ti XTREME WATERFORCE 24G employs WATERFORCE liquid cooling systemwhile for the Gigabyte GeForce RTX 3090 Ti GAMING OC 24G the manufacturer has opted for WINDFORCE X3 technology. So, to better understand the difference, let’s take a moment to talk about both systems.

WATERFORCE technology proposes a liquid cooling system that rests on a 360-millimeter aluminum radiator, a piece that, due to its size and volume, substantially improves the thermal efficiency of the dissipation scheme. The water tubes are made of FEP, a material that not only minimizes water losses, but also contributes, due to its thermal stability and resistance to pressure, to the controlled maintenance of temperatures and the longevity of the cooling system. .

The heatsink’s copper plate stays in direct contact with the GPU, VRAM, and other graphics card components, and the set is completed with three 120-millimeter dual ball-bearing fans. As a whole, as you can imagine, this system allows you to overclock the Gigabyte AORUS GeForce RTX 3090 Ti XTREME WATERFORCE 24G in very controlled and safe temperature conditions.

As for the Gigabyte GeForce RTX 3090 Ti GAMING OC 24G, for its cooling Gigabyte has opted for WINDFORCE 3X technology, which combines a system of three independent alternate-blade fans, vapor chamber, 8 composite copper heat pipes, active 3D fan and screen cooling. As you can imagine, this combination of elements offers, as a result, a temperature control that allows, as the name of the card itself indicates, overclocking in safe conditions. 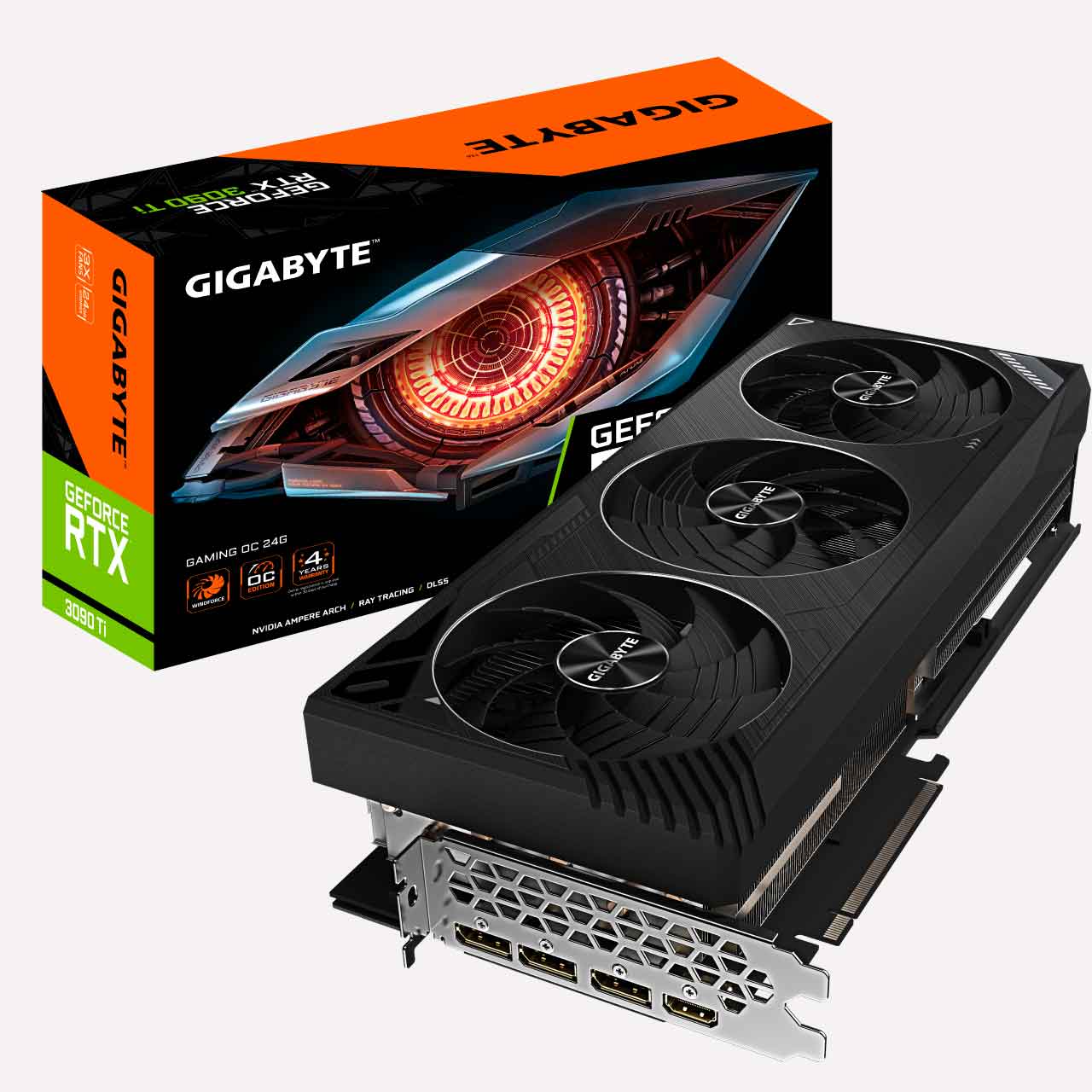 First, the vapor chamber is in direct contact with the GPU, VRAM, and other critical components, which is the first stage of heat dissipation from them. Right after we find the screen cooling, that expands the dissipation surface, optimizing it so that the fans can do their job better. As for them, thanks to the redesign to which they have been subjected, they are now capable of moving a greater flow of air without having to increase their revolutions, something very appreciated in the face of noise. Additionally, the central fan rotates in the opposite direction in order to optimize air circulation for heat dissipation.

And with respect to it, Gigabyte keeps another good news, and that is that the card can be set to two modes: OC and silent. The first, of course, is the one that provides the maximum performance of it, while the second takes advantage of the optimization of its dissipation system so that, with it running at low performance, it provides adequate cooling to use the PC of a quieter way.

So, as you can see, Gigabyte has focused on the heat dissipation systems of its GeForce RTX 3090 Ti, thus allowing users to maximize this GPU in safe conditions. But, additionally, they have also taken care of their design, as you can see in the images, making them quite attractive if they are mounted in boxes with glass sides or any other transparent material.

Ultra realistic driving with these steering wheels for PS5 and Xbox

The Roblox gaming platform is operational again after three days down