Deep Learning Super Sampling has been in our opinion much more important than Ray Tracing as a novel technology to reach the market. At the time we tested it with SOTTR and we were surprised by the increase in performance, the improvement in the overall quality of the game and especially by the sharpness it provided. But this has not been fulfilled with the bulk of the games and the problems have been varied throughout this long year and a half. So verifying that DLSS 2.0 works like this is going to be a challenge, since it is already mature, well implemented and conclusions can be drawn in a title like Control.

AI at the service of a new DLSS 2.0 that promises improvements

We are not going to go into all the improvements that DLSS 2.0 includes as a revised technology, we already saw it in the previous link in an exclusive article that we recommend reading if we have doubts. We are going to focus on Control as it is a fetish game for NVIDIA where this new version has been implemented correctly and we can take precise performance measurements.

As we have always used our test equipment to validate this performance, to which we have added the new RTX 3080 Ti:

That said, logically the data captures have been made in game and are divided into 3 resolutions and two settings: 1080p, 2K, 4K with and without DLSS. With that said, let’s see what DLSS can offer. 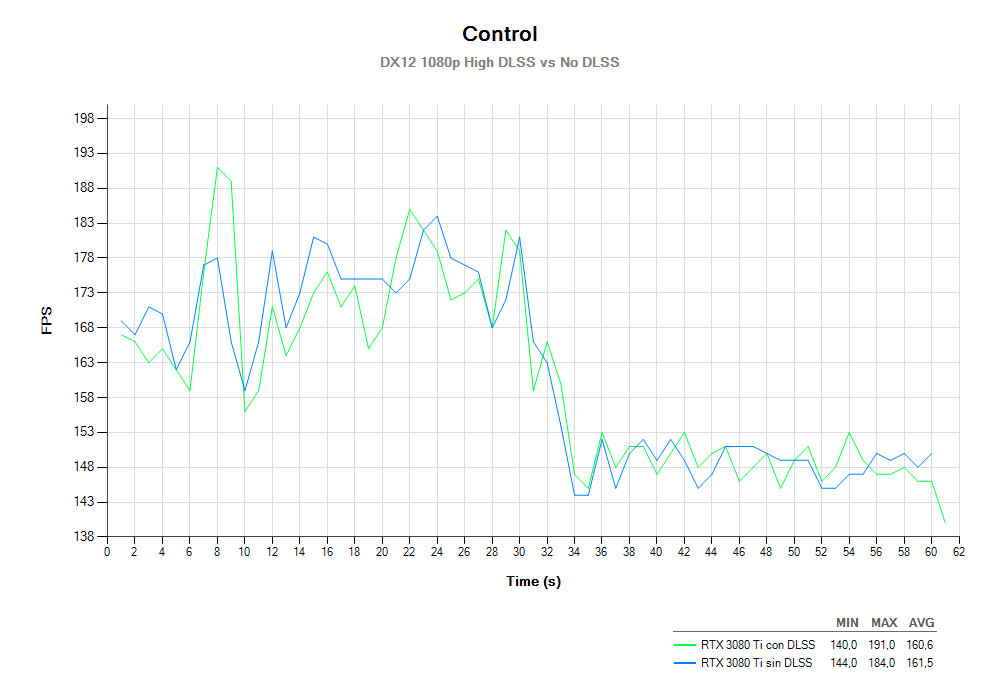 Here we see that in 1080p the rescaling is so slight that it seems non-existent, the averages barely reach 1 FPS of difference of 160, that is, it falls within the measurement error range. It seems that this resolution has no impact on performance, but let’s see the FrameTime.

It is also true that NVIDIA continues to suffer with its drivers and the low graphic load in some titles, where in 1080p the GPU is between 60 and 80% of its load. This means that the performance is not increased since the GPU is not able to scale in this load. 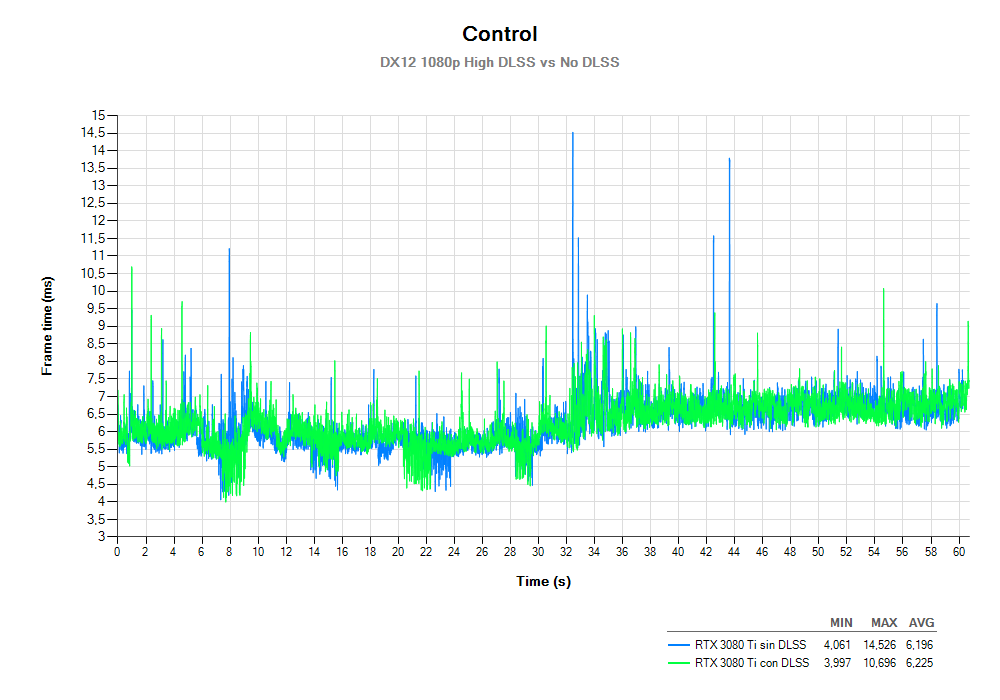 Here what we see is that although the performance is similar in FPS, it is not so much in this section. And that the average is practically nailed, but the graph shows how with DLSS a bit more smoothness is achieved, but we will verify that in a later graph with concrete data. 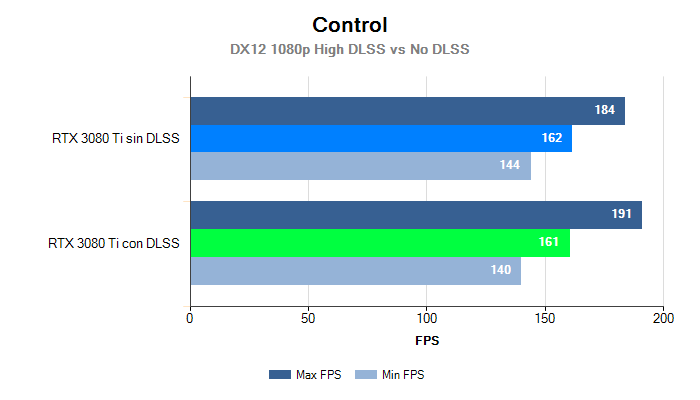 Here we see that the highs and lows are quite close, more at the lows and less at the highs. So DLSS achieves more theoretical performance, than not practical and much less useful, at least in 1080p. 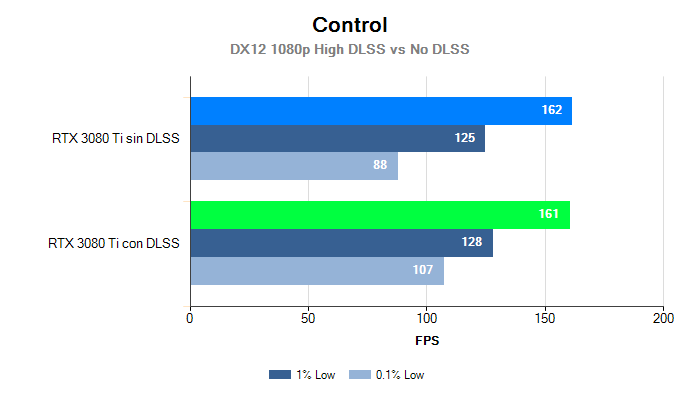 Again we can see this in the percentages of 1% and 0.1%, where in the latter it gets a better ratio and average, much better, so although there is no performance improvement, there is in the gameplay. 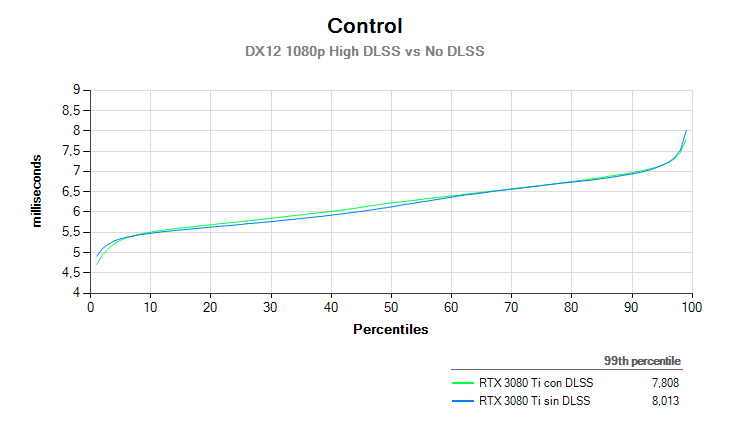 As expected, the percentiles are practically identical, nothing to comment here since we have seen the above. 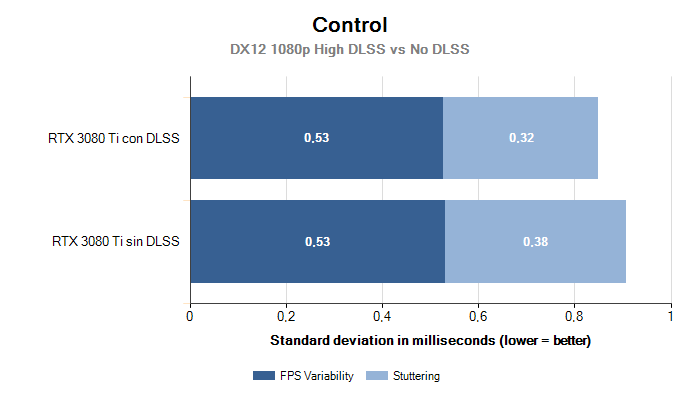 But once we leave behind the percentile we see how the variability of the FPS is identical in both, which is logical seeing this, but the stuttering is somewhat lower if we activate DLSS, giving a better feeling of fluidity in the game. Ergo as consumption is maintained and does not affect performance under this resolution it is clear that it can be activated and thereby improve the playability and the experience in the game. 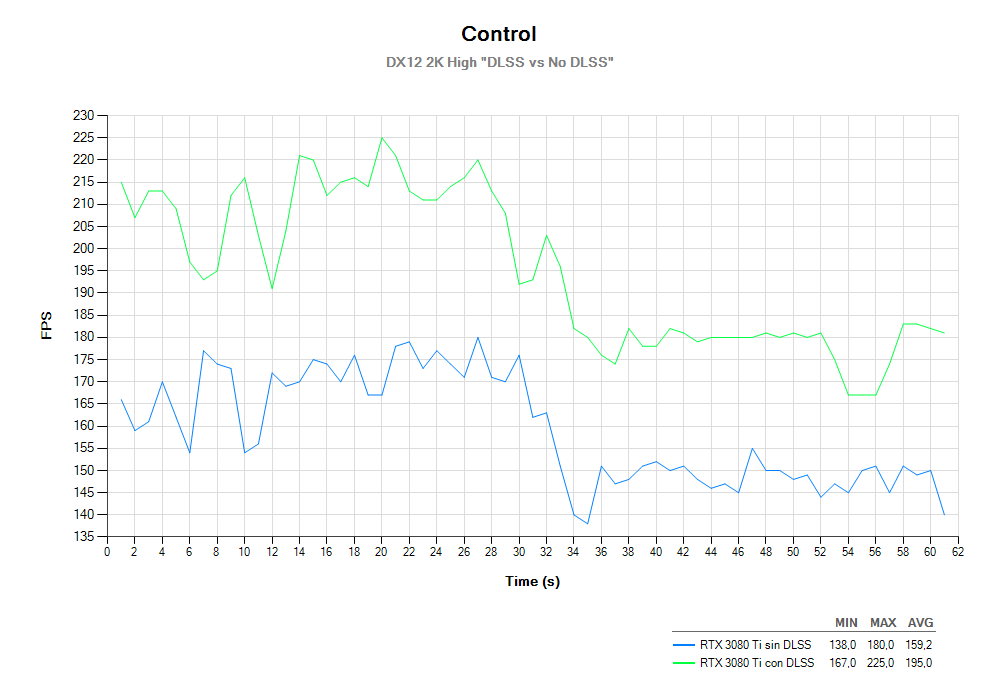 Raising the resolution to 2K things completely change because the graphics load increases and the CPU is less relevant. As we can see the difference and a half between having DLSS 2.0 active or not having it is nothing less than almost 35 FPS, where it also seems that we have more stability in the FrameRate, but then we will check it with data. 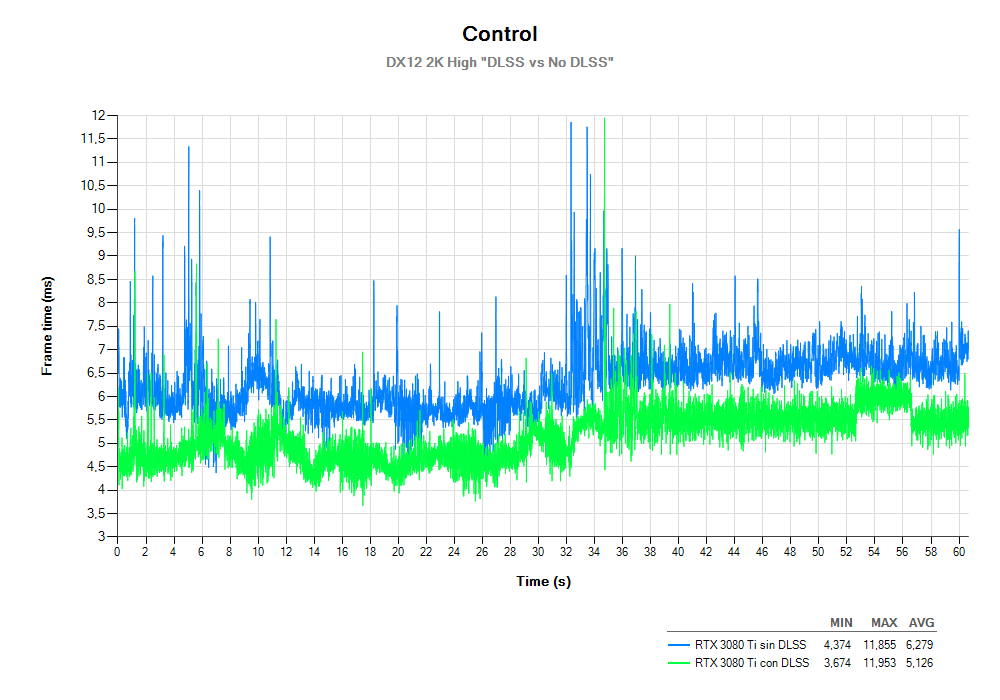 What is clear is that the smoothness is much higher and the difference in FPS has little to do with it. With DLSS 2.0 everything works much smoother, the gameplay is better and with this we will enjoy the game much more. 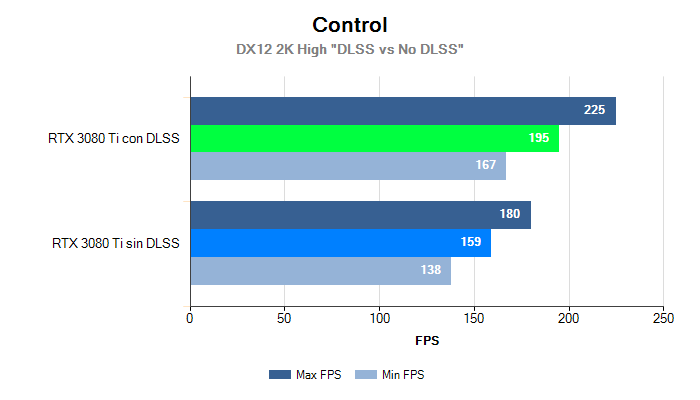 As for FPS at minimum and maximum, the data speaks for itself, DLSS 2.0 literally beats the option of not having it active. 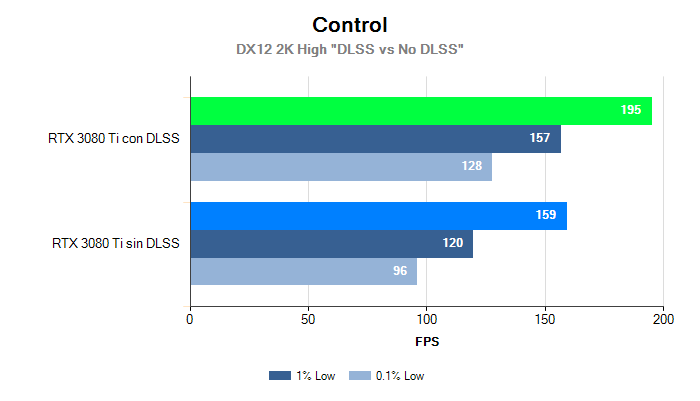 The same case happens with the percentages, at the moment we do not see any argument not to activate it under 2K resolution, and that the rendering of DLSS 2.0 has been selected to the maximum in this and the other tests. 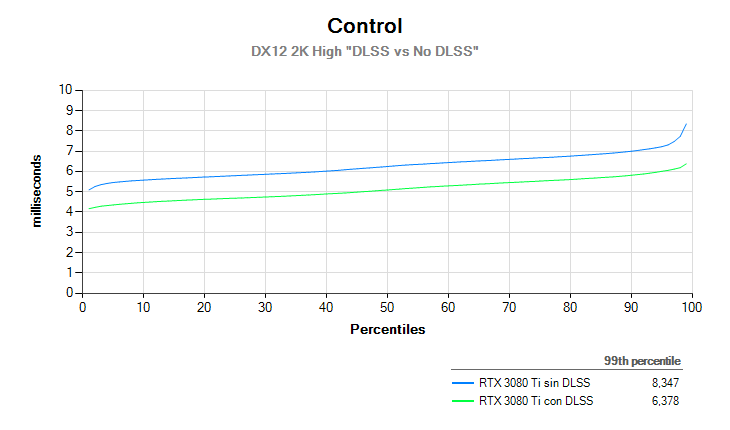 The percentile is devastating in favor of NVIDIA technology. More stability in milliseconds, lower figures and almost a horizontal line with a variation of just 2 ms, simply amazing. 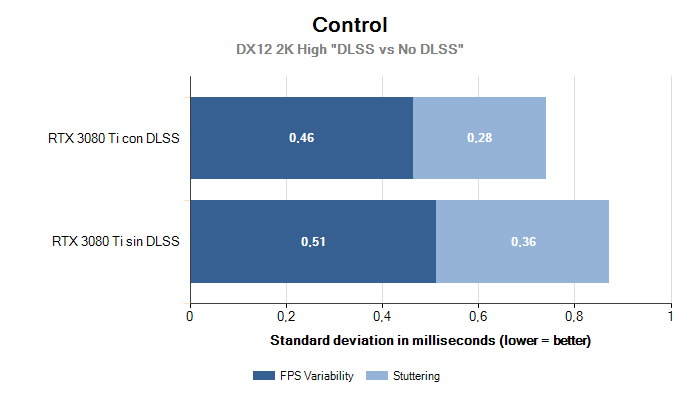 As for FPS drift and stuttering, a bit more of the same. DLSS 2.0 achieves more stability in framerate and considerably less stuttering, 22% better when it is active than when it is not. 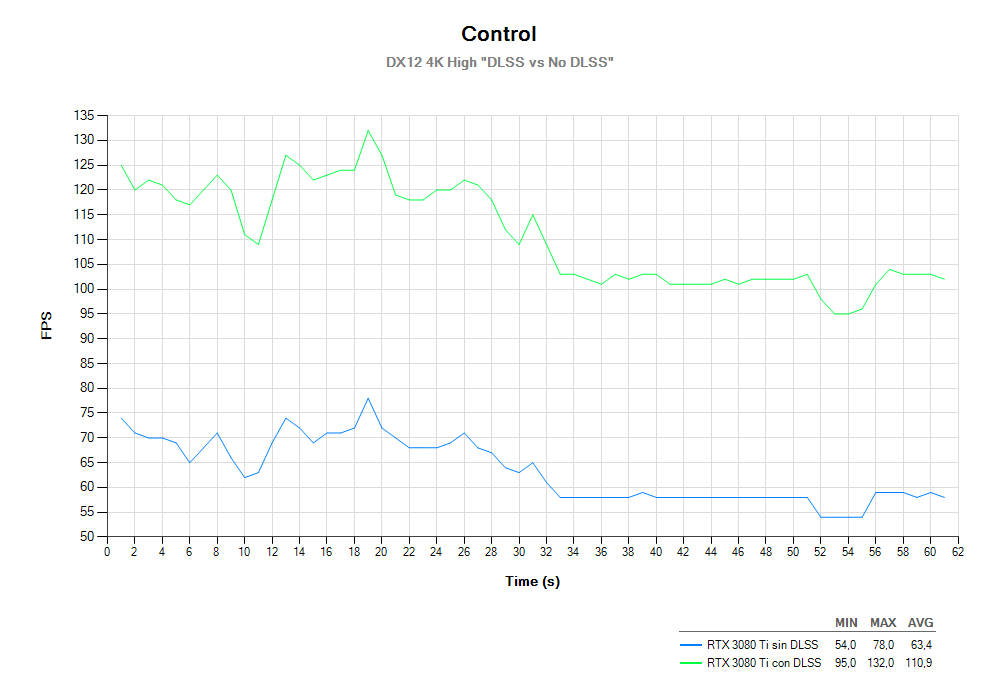 Under 4K resolution the GPU suffers much more and the CPU much less, so the difference between having DLSS 2.0 active and not having it will be greater, since it boosts performance more and that is noticeable. It does not double the performance, but it stays really close and not only that, but it also gains stability, at least at first glance. 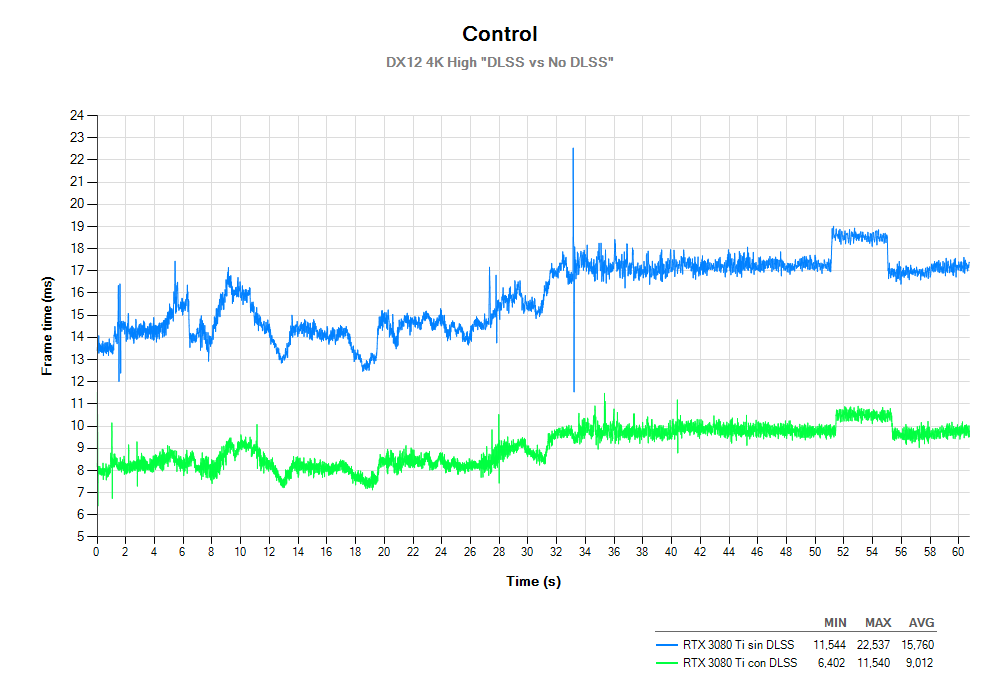 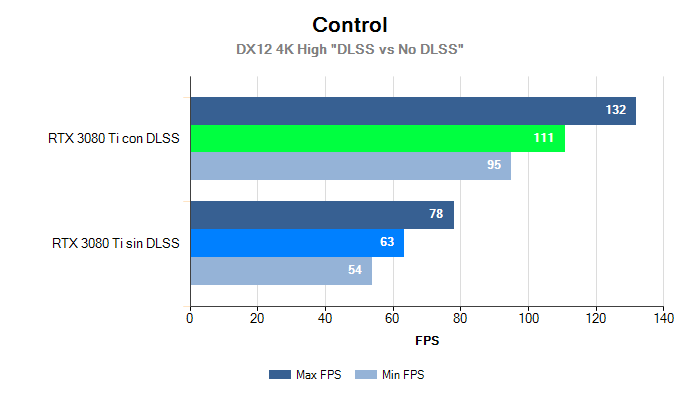 Minimum and maximum, nothing to say that is not clearly seen, almost double the performance. 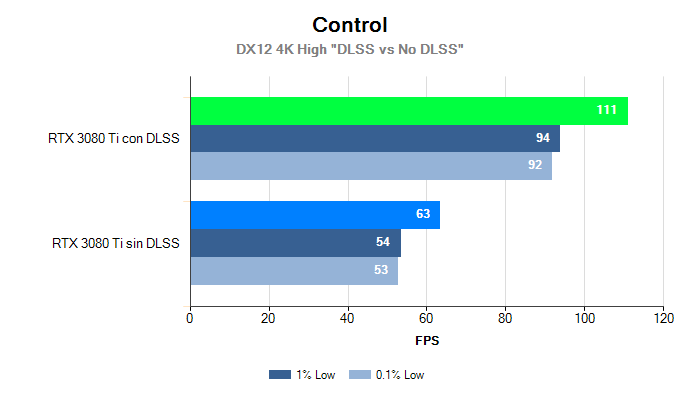 Same case for the percentages, nothing to object here to DLSS 2.0, a marvel. 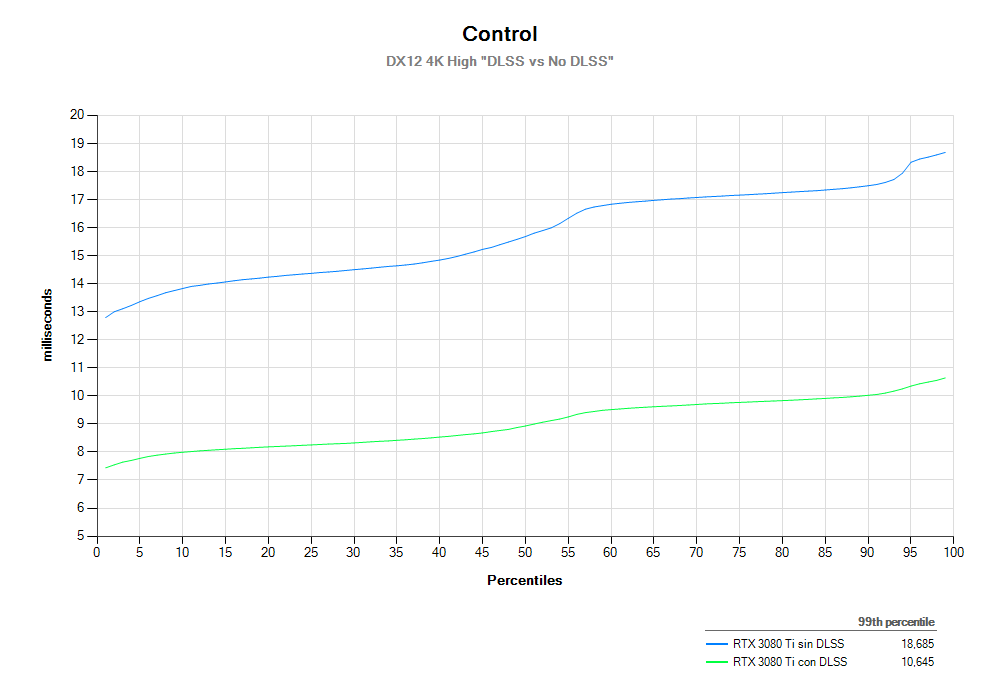 The percentile is not as good in terms of stability as in 2K, but it is very flat, which shows the stability of the framerate and the framtime. 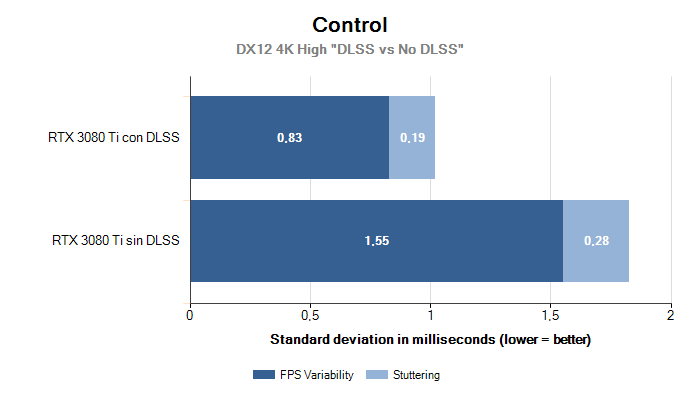 Here you can see everything discussed in a much more graphic way. Mind-blowing FPS stability, and hardly any stuttering, so from memory we think it’s the best data we’ve ever recorded, so we’re really surprised. 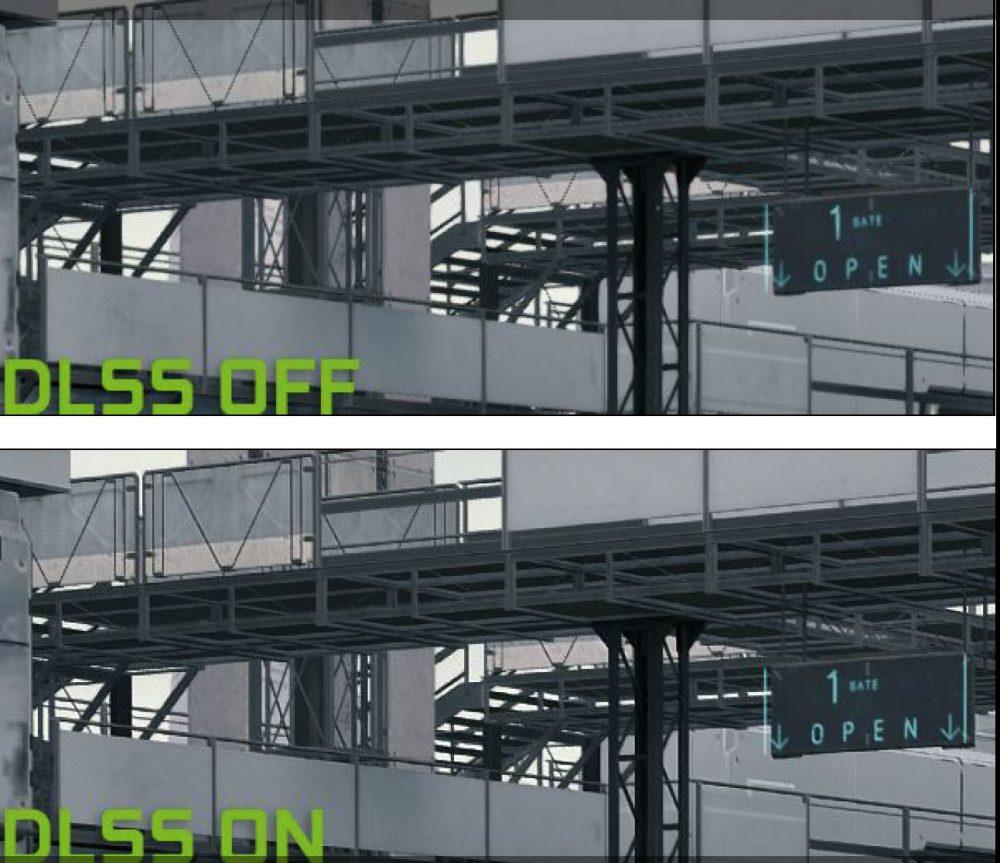 DLSS 2.0 is a technical marvel developed by NVIDIA and in this case it does not bring the problems of its predecessor. Nor does it provide a remarkable sharpness like its original version, but we can graphically speak of a slight improvement, which we will have to be attentive to appreciate.

In movement it is not noticeable, because already in static with two identical images it is difficult to distinguish and it is something more in situ than as its own image. Regarding the performance and saving the problems of NVIDIA and 1080p that we have already seen in both the RTX 3070 Ti and the RTX 3080 Ti and the new batch drivers, at 2K and 4K the performance is surprising.

So much so that at the highest graphic load it almost doubles the FPS and this allows Ray Tracing to be activated without losing performance. Therefore and given that there are no apparent problems, this DLSS 2.0 version is a giant step for NVIDIA and a tough competitor for AMD FSR, especially because at high graphic load it is impressive what it achieves and not only in terms of performance, but of softness.

FaceTime or Skype? Know the advantages of each one