These are applications that are responsible for analyzing the performance and behavior of the CPU to find out its operating speed and performance, without downloading programs for it. Which at first glance can be counterproductive, since the performance of a processor is maximum the closer the data is and it does not make sense in principle that a web page is capable of measuring our CPU.

In reality, what these pages do is load a program in the form of a web application, which is temporarily stored in our RAM and is actually executed from our PC and not remotely. Then the operating system when we close the browser tab or it will free the memory. This allows us to test the performance of our processor without having to download anything to our PC.

This is also possible due to the fact that the benchmarks are very light programs in size, since some of them have to be executed from the processor cache, and this is a few megabytes in size, so it is a waste of time. download and install them when we have the ability to run them directly and in a very short time thanks to current internet speeds.

Our computers are multitasking systems that execute dozens of different processes and when running any performance test it is important that our computer can focus solely on it. That is why we recommend that you close all the applications, background processes that you can and do not forget about the different tabs of the browser itself.

What are the online benchmarks that exist?

Below we leave you a list of online benchmarks that you can run from your PC’s browser to measure the performance of the CPU that you have installed on it, as well as to know how it compares with the rest of its type and similar hardware, on the same or similar computer configurations.

The first available option is the one that we least recommend, since CPU Speed ​​Test requires Adobe Flash installed and this ends up becoming a waste of resources and security problems associated with it. We also have a version for Java, but since Oracle bought Sun and made paid Java, this makes it lose points.

And how is the benchmark? Well, very limited, since it only allows us to measure the CPU clock speed if we press the option to start the performance test. This is not why it is completely useless, since it allows us to know the clock speed in real time. The problem, as we have already mentioned, is in the use of Java and Flash for the online version of the benchmark, which, apart from the problems that we have mentioned before, are also a load for the processor. In conclusion, it is not the best way to measure the performance of your PC’s CPU. 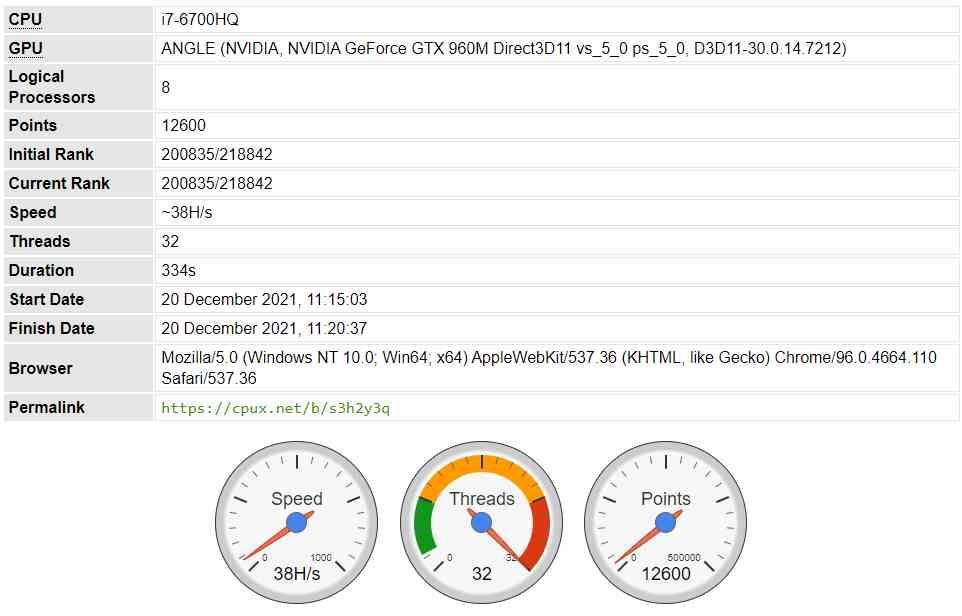 Secondly, we have an online benchmark that allows us to measure the performance of the CPU in a more complete way than the previous one and that is based on running a decryption algorithm to check the power of the processor. CPU Expert is a test that progressively increases its workload, making it run more and more processes. Before starting it, the web page asks us the model of our processor and what we want the benchmark for, which shows us that this online performance test is not capable of detecting what the performance test will be done on.

This is a benchmark that is completely agnostic of the ISA, so it will not only allow us to measure the performance of x86 cores for PCs from Intel and AMD; but also ARM CPUs and even RISC-V. At the end of the test, it will inform us of the score obtained and in what position within the ranking within the online benchmark itself.

In addition to the standard test, CPU Expert allows us to perform a stress test on the processor, which is much more complete than the previous one, since we can directly configure two different parameters. On the one hand, we can assign the number of processes that we are going to load the processor, which will allow us to measure the performance of the CPU with one core or with several. As for the Power parameter, it helps us to mark the work time assigned to each core by percentage of time for each core. The workload is calculated by multiplying the workload by the number of threads. The third online benchmark is SilverBench, but it helps us measure the multithreading capacity, which uses a JavaScript script to do so and offers us three different performance possibilities: the normal benchmark, an extreme test and a stress test. SilverBench is a benchmark that runs the Photon Mapping algorithm, a variant of Ray Tracing, however it does not do so using the GPU at any point.

The standard test at the end will only give us a performance figure once it has been executed, on the other hand the extreme test will take 10 times more, since in said mode the benchmark renders an image that is an order of magnitude larger and, therefore, with a higher workload, so it will keep the processor up in speed for a much longer time. As for the resistance test, this will help us to measure the stability of our processor, in this case it will give us information on the time it takes to render each frame under Photon Mapping.

Contrary to the previous case, where different threads of execution are measured with each other that have no apparent relationship, with this benchmark we can measure the performance of the cores when they work together on a common task. The only thing missing is being able to set the number of threads for the algorithm to more than 4, especially for much larger processors.

Are you annoyed by NVIDIA processes in Windows? They serve for this