At first glance, the SupremeRAID SR-1010 looks like a graphics card, but it is hardware focused on managing multiple solid-state storage drives or SSDs in a data center or server. It’s actually both, and it’s an example of how graphics hardware has evolved since it stopped focusing only on displaying beautiful graphics for video games.

The product we are talking about now is not new, since it was released in a limited way in the summer of last year, but it demonstrates one of the inherent problems of adopting SSD drives as a storage method. Having to manage the large volume of data moving through from the drive to RAM via the PCI Express interface can suffocate entire CPU cores.

The solution? The use of support processors in charge of managing said communication and that leave the main processor free for its usual tasks. This is the case of the new generation Xbox Series and PlayStation 5 consoles, which integrate specific domain processors and fixed function units that together not only manage data copying, but also the ability to compress and decompress data.

SupremeRAID SR-1010, a graphics card as an SSD controller?

However, a highly original solution for managing large volumes of data is the use of an NVIDIA graphics card, in this case an A2000, for a function other than its common purpose. This is what the GRAID folks have done with their SupremeRAID SR-1010. We have already seen them in tasks such as mining, but in this case we are talking about a graphics card to manage SSD. In total, it can handle up to 32 different units, so as you may have understood, we are not talking about a solution for a home system, but for a data center or server and especially for the management of a NVMe-Of system

So the SupremeRAID SR-1010 it bridges between the different NVMe SSDs in the server and the system RAM. able to drive up to 110GB/s transfer per second to solid state drives and supporting the following RAID levels: 0, 1, 5, 6, 10. All this on a card with a 70W power consumption and with an i16 lane PCI Express 4.0 interface. If we are already talking about performance, it will depend on the operating system used, the size of the data blocks, whether the access is sequential or random, and the RAID level. Above these lines you can find the performance of this particular piece of hardware under different scenarios.

Are we going to see it on our PC in the future?

Input as is as we have described in the previous section no. If there is a key point for the adoption of SSDs on a large scale, it is storage. Which brings us to something that at the moment is unpublished on PC, however, on consoles there are already data compression and decompression mechanisms capable of decompressing several GB per second on the fly without the participation of the central processor that would need several cores for it and I would do it in an excessively long time. 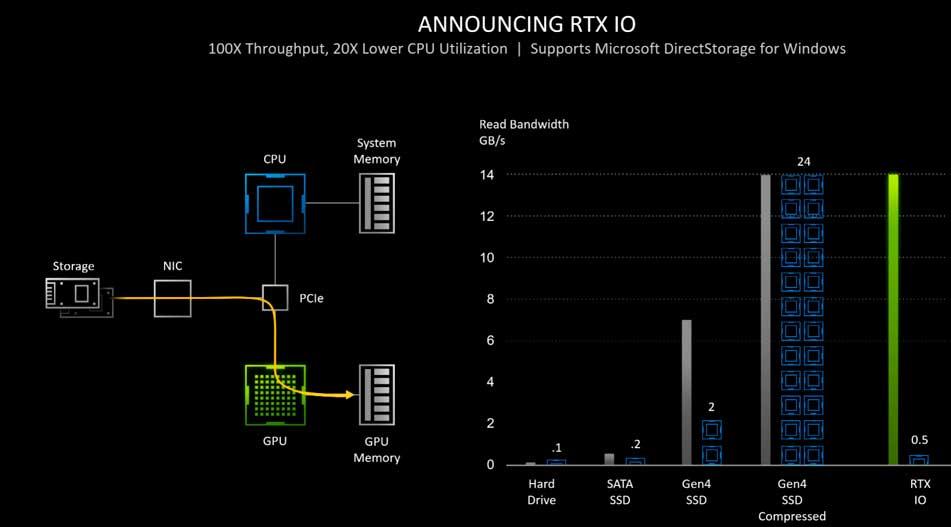 One of the key technologies is the ability of newer graphics cards from NVIDIA and AMD to access the content of SSDs without involving the CPU in the process. This means that if our graphics hardware is powerful enough, then the graphics hardware can take care of the on-the-fly data compression and decompression and without CPU involvement. Which will be a huge advantage, since pwe will be able to reduce without problems the installations of our data and applications, making space on SSDs less of an issue.

The graph used for SupremeRAID SR-1010 is an NVIDIA A2000, which is based on the same chip as the RTX 3060 and is powerful enough to handle a complex RAID system and up to 32 drives. We have no doubt that when the future NVIDIA RTX 40 and AMD RX 7000 come out, they will include optimizations so that high-speed SSDs aren’t a burden on the processor.

So you can use and benefit from the Malwarebytes VPN