Within the extensive range based on Intel’s Alder Lake architecture, which will be used for both desktop and laptop CPUs, are the so-called Alder Lake-H, designed for high-performance laptops. Well, it seems that there are already preliminary performance tests of the Alder Lake-H, which do not obtain a result that can be said to be encouraging. What is happening? We explain it to you.

Intel will launch its Alder Lake for laptops in early 2022, if there are no last minute changes, to compete against the AMD Ryzen 6000H and 6000U range based on AMD’s Rembrandt architecture.

Is this the performance of the Intel Alder Lake-H CPU?

It has appeared within the database of results of Geekbench the result of an Intel Alder Lake-H, which would have been shipped by Hewlett Packard. Which shows us that Qualification samples of this variant of Alder Lake already exist. The result obtained? 1258 points in the performance test is single core and 6831 in the multi-core performance test.

The result obtained is partly disappointing, especially if we take into account that the AMD Ryzen 7 5800H with 8 cores Zen 3 gets 1338 points in the single core test and 7063 points in the multicore. Which means that the AMD CPU scores better in both cases, although it is not a capital difference either, since they are differences of 6% and 3% respectively. 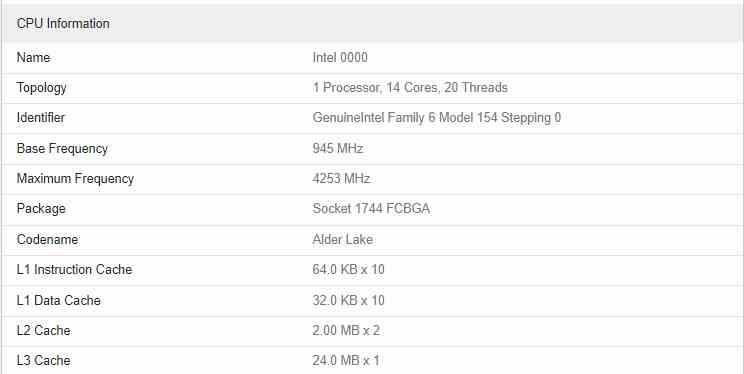 One might think at first that the benchmark does not detect cores well given the hybrid configuration, but a quick glance at the Geekbench database page makes it clear that it does not. Besides that the result is given as valid by Geekbench. As you can see, the benchmark detects all cores and should pick up one of the Golden Cove cores as the 0 core from which to test for a single core.

What yes that we do not know is the clock speed of the Alder Lake-H that has been tested. Which if we apply Occam’s razor could be the reason why the AMD Ryzen 5800H performs better in these preliminary tests. We know that Golden Cove cores will have an increase in IPC over Tiger Lake-H’s Willow Cove cores, so we should expect AMD to be ahead of AMD’s Zen 3-based CPUs in performance per core.

Editing tweets on Twitter is already possible, but you won’t be able to do it