There is no doubt that Intel has put the accelerator in its roadmap for future releases of desktop CPUs, to the recent launch of Rocket Lake-S we have to add that Alder Lake-S will come out in a few months to be replaced in less than a year by Raptor Lake. This release cadence could be slightly delayed according to an Intel roadmap.

While qualification samples are being sold on the Chinese black market for values ​​above $ 1,000, it appears that the Intel Alder Lake-S release date has slipped a bit, as if we take into account the route map that has been leaked and that would have as its origin Intel itself, we can see how the Alder Lake-S have been delayed a quarter and will coincide with the launch of the Alder Lake-P, the laptop version that includes both the Alder Lake-U and the Alder Lake-H. So we are talking about that both Alder Lake will launch in the first quarter of 2022.

The date does not surprise us in the case of the Alder Lake-P, but in the case of the Alder Lake-S, since we expected them by the end of this year and everything indicated that we were going to have Intel’s Gen 12 at the end of year. More when the qualification samples, which are already the fully functional final design, are in the hands of the assemblers and the performance tests have been seen.

The case of Alder Lake-P on the roadmap is curious, it seems that the BGA configuration with 8 Golden Cove cores, apart from the 8 Gracemont cores, will not be available in the initial launch of the Alder Lake-P that will be given in the first quarter of 2022. So the H55 will have to wait a little longer. Most likely it will end up on both laptops and desktops, being a direct successor to the Tiger Lake-B, the desktop version of the Tiger Lake-H, which also uses BGA packaging instead of socket, and ported both soldered to the plate.

Alder Lake will depend on the operating system for its performance 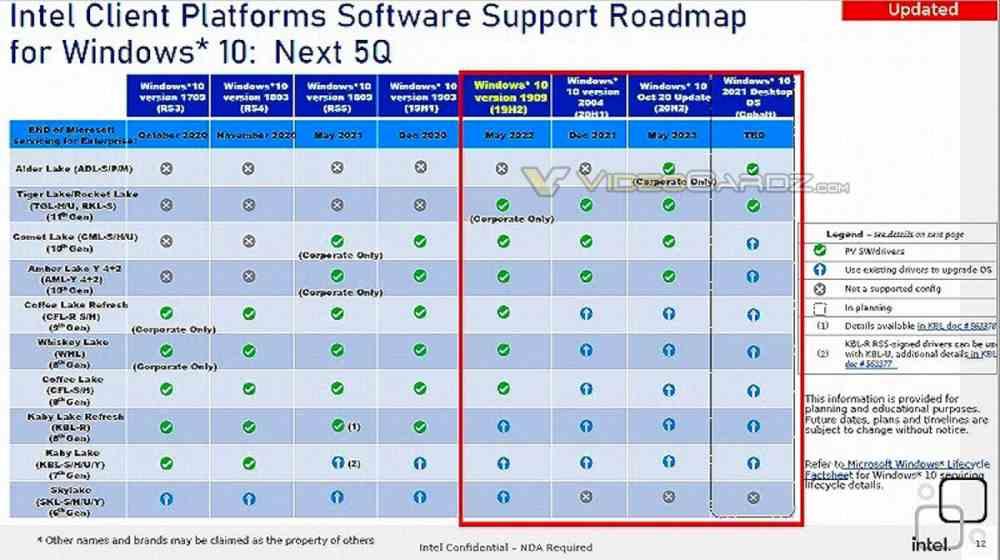 As we mentioned recently, all hybrid CPUs in which cores with the same ISA are combined, but with different power and consumption, require intelligent management of the operating system. This is why Intel has to work in tandem with Microsoft to bring CPU resources. The surprise? It appears that Windows will not be optimized for Alder Lake until May 2023.

It must be taken into account that we are facing an already old road map, which was created before Microsoft decided to sell one of the largest updates to Windows 10 as its successor through marketing strategy. Let’s not forget that both Microsoft and Intel have promised optimizations in Windows to get more performance out of the Alder Lake, which includes optimizations in the operating system and the way it manages its processes and manages them around hardware resources.

To finish, we know that Intel has long had a patent to integrate the management of processes in the threads of execution in a hybrid processor from within the CPU itself, but we do not know if this is the case of Alder Lake or we are going to see this integrated into future Intel CPUs. In any case, it is possible that the delay in the date of the Alder Lake by Intel has to do with the performance of these under Windows.

Don’t lose your books, create your own Caliber library in the cloud Can’t open Microsoft Edge? this is how you fix it