According to Mercury Research, in the first quarter of the year 2021 AMD has also lost some market share compared to Intel; however, most of Intel’s revenue is generated by low-cost Celeron and Pentium processors and the lower Core i3 and i5 in certain situations. AMD’s entry-level market was overlooked in this report, mainly due to a shortage of semiconductors and a focus on higher-end parts with better profit margins, but the fact remains the same: in the end it’s the CPUs. of the entry range, the ones that sell the most.

The same was verified in the last press presentation in which Lisa Su, CEO of AMD, confirmed that the manufacturer wants to increase its production capacity with TSMC by changing the PS5 to N6 and gradually eliminating Apple devices at 7 nm.

Intel to separate from AMD again according to Steam statistics

According to Steam usage statistics, the majority of Intel’s gain has come from CPUs between 2.7 and 2.99 GHz, which again implies mid-range processors. Recall that many processors below the Core i7-11700K including the 11500, 11600 and 11700 processors without “K”, have not stopped having availability in stores and also at relatively cheap prices for how things are, so it is possible that many Users have opted for these processors in recent times.

In any case and as you can see below, in the month of June Intel has managed to scratch a 1.72% market share (according to Steam) to AMD, which has helped it to get back above 70% of the pie. As you can also see, in recent months AMD has always been gaining ground little by little, crumb by crumb, until reaching more than 30% of Steam users with their processors, but now they have taken what seems to be a hard blow which places them below how they were in the month of February.

Compared to the previous months, the GPU category has moved significantly as well. After all, it seems that the availability of the NVIDIA RTX 30 Series graphics card series is improving, and this has resulted in more and more users being able to opt for them.

While the most popular SKUs are the RTX 2060, GTX 1060, RTX 3060 (desktops and laptops) and RTX 3070 (laptops) have seen significant increases in recent days, sadly none of AMD’s RDNA models are included in the top 20. used. The Radeon RX 6700 XT has recently had an increase in its offer, but if this is the case it is not something that has been reflected for now in the Steam database. 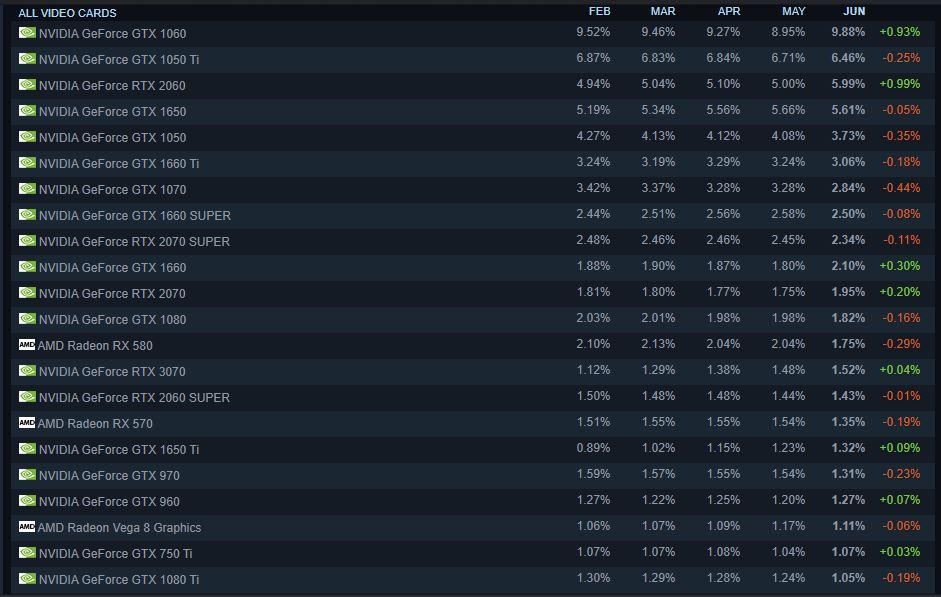 After a lot of months in which things kept getting better for AMD, it seems that in the last two months they are losing all the bellows they had achieved and they continue to lose share in both the CPU and the field. GPU, and we can’t help but wonder why. Has AMD stopped doing things right? Were users buying AMD just because of the high price of Intel and NVIDIA? Do users prefer to pay more to have Intel or NVIDIA?

Do you want to code in Swift? Use these code editors