This processor (or processors) is reportedly running at a base frequency of 1.5 GHz, but according to Geekbench’s JSON output the reported clock speed is actually 4.68 to 4.7 GHz. Whether it is an actual clock speed or a Geekbench bug cannot be known, but it is worth noting that Intel Sapphire Rapids will also be released as HEDT CPUs for the consumer market, so such frequencies are expected at some point. .

Geekbench does not explicitly confirm that it is an Intel Sapphire Rapids CPU, and yet the identifier reveals the family of CPUs, Family 6 Model 143 Stepping 2, and it is precisely the model that is specifically known as Sapphire Rapids.

The processor has been tested on an Intel reference platform codenamed VulcanCity. The system was equipped with 32 GB of DDR5 RAM, but the Geekbench result again does not confirm the operating frequency. However, what is more interesting is that caches have been included in this leak and it shows 75 MB of L3 cache and 40 MB of L2 cache. 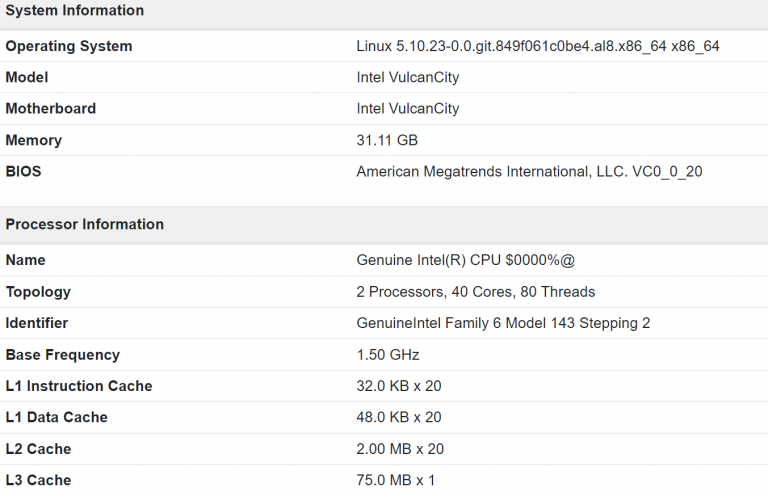 In its current state, this 20-core Intel Sapphire Rapids CPU running on a dual-socket system is not too fast, and is in fact widely outperformed by the Ryzen 9 5950X which offers twice the multi-core performance. Single-core performance is even worse, since it falls short of most processors released five years ago including notebook CPUs; That said, it is pretty clear that the processor they have used in the tests is not running at full speed and in fact appears to be in an early development phase (it is what the engineering samples have).

Intel recently announced that its Sapphire Rapids CPUs will go into mass production during the second quarter of next year, so as we have mentioned it is clear that it is in an early phase of development and has a lot of room for improvement until, within a year and peak, start your actual fabrication. The manufacturer is also actually developing a version that uses HBM2e memory and is expected to hit the market by the end of next year.

This family of processors “in theory” will have models with up to 56 cores and 112 processing threads, with a TDP of up to 350 watts and of course support for eight channel DDR5 memory, up to 64 GB of HBM2e memory and up to 80 PCIe lanes. 5/4. We are still in a very early phase as we have repeated before and in the coming months do not doubt that much more news will arrive, and it is news that interests us since, as we also mentioned at the beginning, we will see models for the consumer market of this generation of Intel processors.

AMD already works on the Navi 31 GPU, what will the Radeon RX 7900 XT look like?

Here’s how the Intel Core 12s perform with DDR4 and DDR5, which one wins?