Disadvantages of charging an iPhone with a fake cable

The main and probably only advantage of using a cable that is not certified to charge the iPhone is the price factor. They are usually very cheap and paradoxically they tend to be easier to find than those that do have certification. That is why in emergencies they may seem like the best solution, but it really is not.

Sometimes we find some that, despite being false, do their job well. However, the most normal thing is that they may present some type of problem that is noticeable especially in the long term. Since problems connecting to a computer until failures like that the load is slower than normal even using the original Apple adapter for fast charging. They can also occur cuts in the power supply that for practical purposes is like connecting and disconnecting the cable continuously. Sometimes you may even overheating the iPhone.

These problems ultimately affect the battery health of the iPhone, which can be seen deteriorated in a faster way than using normal cables. It is understandable that, from what was previously commented in reference to its price and availability, they can be a very tempting option if your cable has suddenly broken and you have no other options, but it will be convenient for you to use it as little time as possible until you can make yourself with an original one.

Ways to know if they are original cables or MFi

Next we will give you a series of guidelines to follow with which you can find out if your cable is original and complies with the provisions so as not to damage the iPhone while charging. Of course, check everything well because there are very well made forgeries, so the place of origin, meaning where you bought it, it can also be key.

Know if it is the one manufactured by Apple

If you took the cable out of the original iPhone box, no further tests are needed to determine that it is authentic. Now, if the cable you doubt has been around your house for a long time and you do not remember its origin, you can verify it in a very simple way and it will have The phrase «Designed by Apple in California. To this phrase is added the place where it was manufactured, which could be China, Vietnam or Brazil. 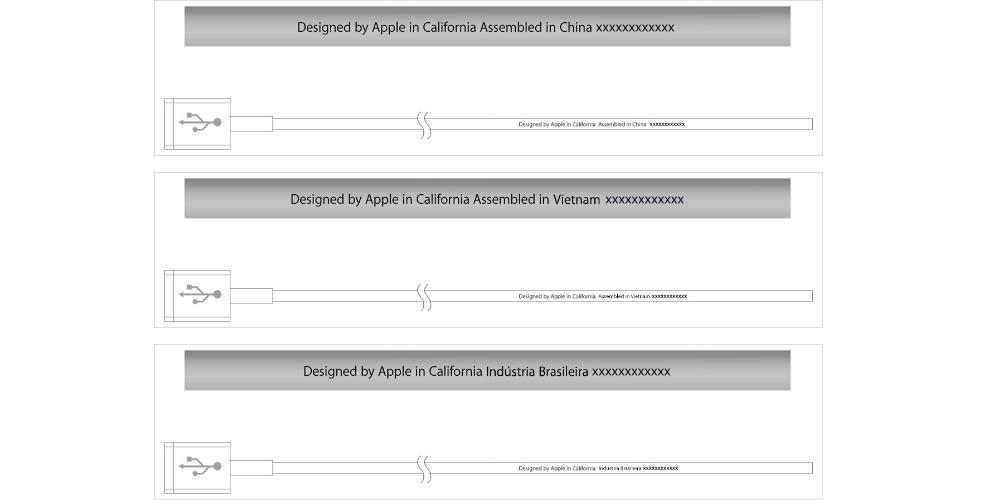 Of course, it is not ruled out that it could be an imitation of the original Apple cable. Therefore, it is advisable that you do not rule out any of the other reviews that we will explain in the following sections. It would not be the first time that we are faced with cables with that silkscreen that end up being false, although obviously it will not be like that if you are sure that it is the cable that came in the iPhone box.

Look at the label on the original packaging

The MFi certificate refers to the acronym Made For iPhone, this being a standard used by third-party manufacturers to design their cables for iPhone. If a cable has this, it means that, despite not being from Apple, its quality and reliability is fully guaranteed, the charging and data transfer of the device being just as safe as with the originals. Usually this certificate appears in the form of a label like these:

This label should appear on the cable box or packaging and / or in the accompanying use and warranty guides. If it is not included anywhere it is a clear indication that it is not original. You might think that perhaps they do have that certification and yet they have not added it, but it is that manufacturers of this type of accessories should not only add that information, but they are also interested in having it appear so that there is no doubt that their product it is of quality.

The first thing you should know is that there are two types of Lightning cables for iPhone. They both have that Lightning on the end that connects to the phone, but on the other side we can meet USB-C or USB-A. There are a series of keys to take into account in all of them as explained by Apple itself, the guidelines being suitable for both their own and those of third parties that are MFi.

Here are the key Lightning connector differences that could help differentiate a genuine Apple or MFi cable from a counterfeit cable: 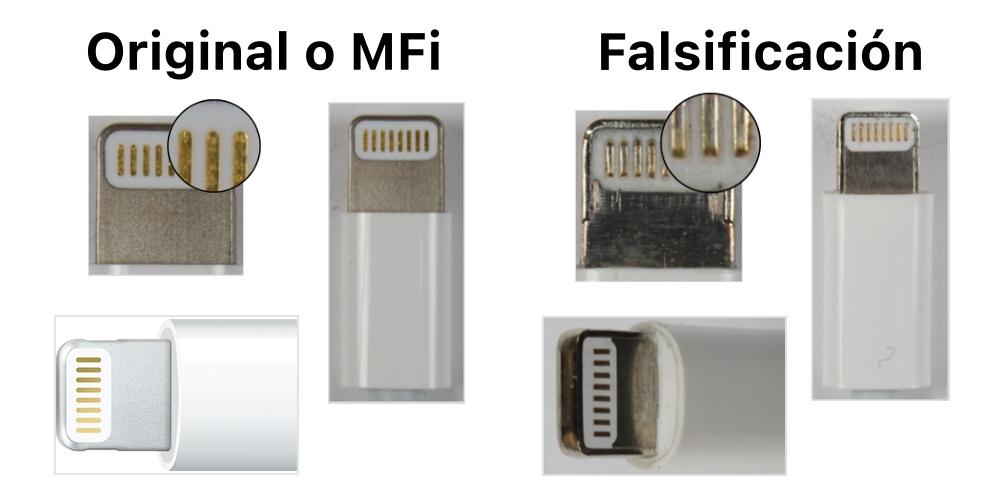 In the cables that are false, some of the previously commented keys may not coincide, with aspects similar to those in the images: that the pins are rough or protrude is excess, construction materials that differ in color, lengths not exact to those mentioned and even variable in width in the same hood …

The USB-A cable is not proprietary by Apple, as it has been a universal standard known for many years. However, we can also find false cables that even in a connector of this type are reliably false. 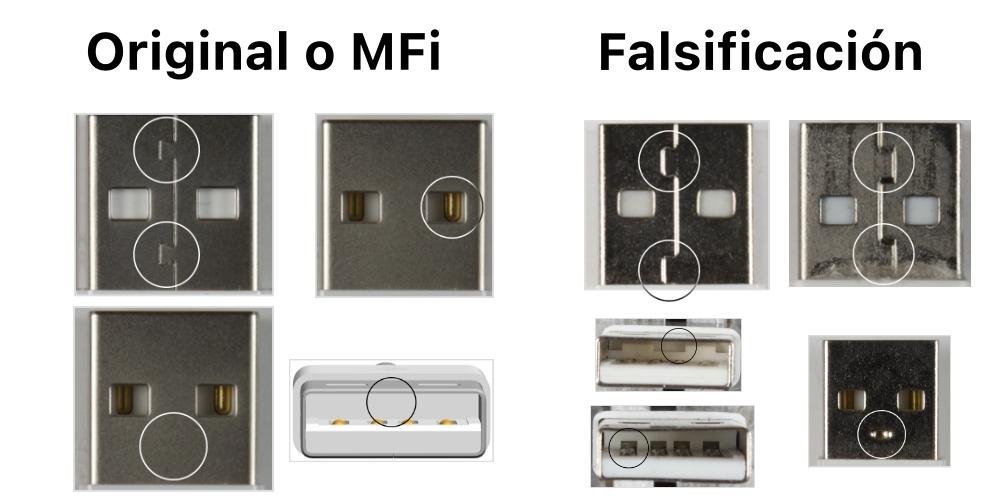 In the fake USB-A, silver-colored contacts, rough, grainy surfaces and distortion are usually found in the sockets that close the capsule, as well as in the insulators or interlocks.

USB-C cables are the most difficult to detect if they are fake, so it will be necessary to observe certain characteristics that could be definitive to verify their authenticity. The most important is that it consists of 24 pin in a very small size and 12 above and 12 below are distributed, as you can see in the image. Although in the end most of the counterfeits that we find in cables with this end do offer an authentic USB-C standard, having in the end the counterfeit in the Lightning cable. For when the new Apple? AirPods, iPhones, iMacs… Do you already have a solution to the screen failure of the iPad mini 6? Apple enters 29% more and confirms the leadership of the iPhone