With the announcement of new PlayStation Plus subscription options, a lot has been asked if the service would be similar to Xbox Game Pass. In essence, both are very similar, but still have some differences between them.

Therefore, the TecMasters decided to make a comparison between what each service offers and the monthly and annual price of each one. It is worth remembering that we are not here to indicate which is the best among them, just to show what each option offers to the consumer.

That’s why we don’t support console wars. Choose your favorite based on what’s on offer.

Starting at full price – not including occasional discounts and promotions – Sony’s service is the cheapest on the most expensive plan – if the annual purchase option is selected.

PS Plus will have three subscription levels: Essential, Extra and Premium – the latter replaced by the Deluxe option in Brazil.

The first package is the standard one, already known by subscribers, which entitles you to download some free games, discounts, cloud storage and access to multiplayer. The value here is R$ 34.90 monthly and R$ 199.90 per year.

Finally, as there is no PS Now in Brazil – which was one of the attractions of the Premium package – Sony decided to implement the Deluxe option here, which offers all the benefits already mentioned and also 340 additional games – in addition to the 400 already mentioned – originally released for PSP, PS One and PS2. For now, PS3 games are not included as they run via the cloud. The price here is R$59.90 per month and R$389.90 per year. 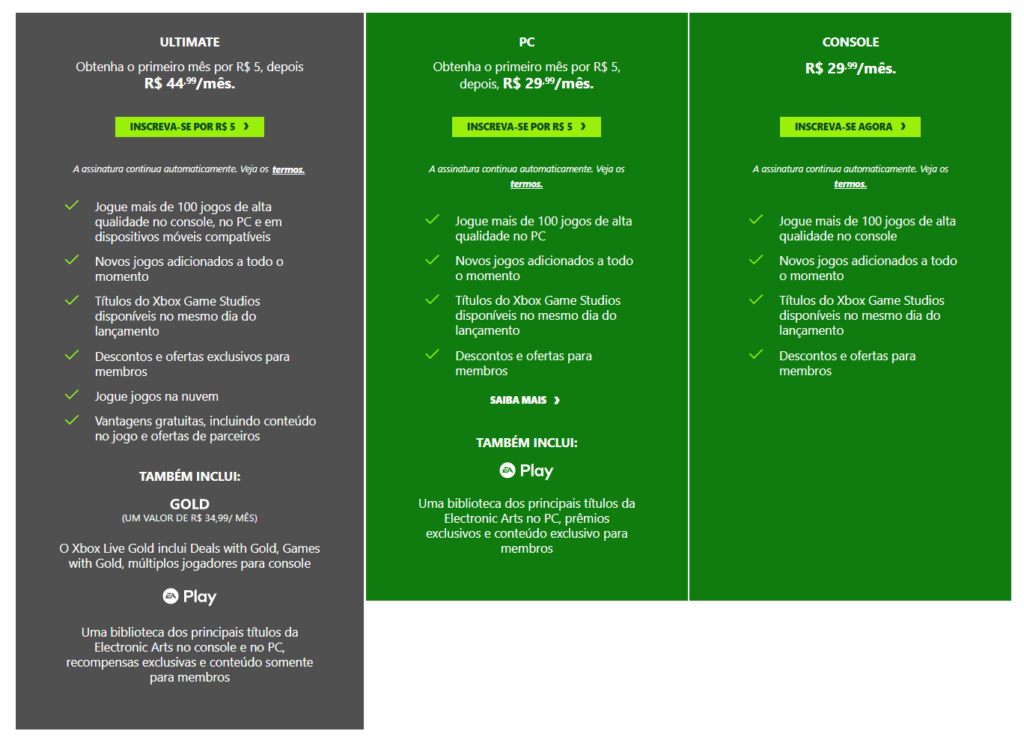 In case of Xbox, there is no option to subscribe directly through the platform on an annual basis. Therefore, payment must be made by users monthly. Like Sony, there are three subscription options: Console, PC and Ultimate.

In the first case, for BRL 29.99 per month, exclusive to consoles, players have all Game Pass games available – added regularly and on the first day of launch in the case of exclusives – and exclusive discounts at the video game store. .

The second option, exclusive to PC, is available for the same price as the console and offers everything already mentioned, only exclusively for PC, and a subscription to EA Play.

Finally, for BRL 44.99 per month, there is a combination of all console and PC games – through access on both platforms – and the option to play everything via the cloud, with xCloud. In addition, there are free perks and offers made available by partners.

This last plan also has free access to Gold – required to play online and paid separately for other plans – and EA Play.

Therefore, as mentioned, despite being more expensive in the annual item, since it is R$ 539.88 for 12 months, there are more benefits for users.

However, as this is a new service, it’s possible that Sony will offer something similar in the future – although AAA games on launch day shouldn’t happen, at least considering what Jim Ryan said.

For the future, Sony promises to further expand the performance of its plans, which will initially reach Asia, North America and Europe.

Additionally, the company intends to expand gaming to a cloud service – likely similar to xCloud. This would be quite interesting, as the player will have even more options to play their games.

What will software development be like in 2022? Here are some clues

We already know where we can see the last movie of ‘Spiderman: No Way Home’ and no, it is neither on Netflix nor on Disney +

Teleworking decreases 4% in Spain during the last year