We continue with the review of all the news that have seen the light in this CES 2022, and now it is the turn of Lenovo, which has also arrived well loaded with news and with the most varied proposals, from renovations of some of its most paradigmatic equipment to some proposals that experiment with very interesting ideas. There is no doubt that, as we have already mentioned in the case of other manufacturers, Lenovo also wanted to shine this year in a particularly interesting edition of CES.

To begin with, we can talk about a particularly emblematic product line for many, many years. I speak, of course, of ThinkPad, and if this morning we were talking about the new Z13 and Z16, now we look at the Lenovo Thinkpad X1, which, how could it be otherwise, have been among the first to adopt the newcomer Twelfth Gen Intel Core for Laptops, which was unveiled yesterday. Thus, ThinkPad X1 Carbon, ThinkPad X1 Yoga and ThinkPad X1 Nano are already Alder Lake.

Hand in hand with this update, and how could it be otherwise, some of the main novelties associated with the new generation come to the Lenovo ThinkPad X1, as you can see in the table below, such as memory compatibility RAM DDR5 and LPDDR5, connectivity WiFi 6E and ports Thunderbolt 4. Additionally, and with respect to its predecessors, we see improvements both in terms of its screens and the capacity of its batteries.

The arrival of Lenovo ThinkPads on the market is scheduled for March 2022.

Yoga is a family that Lenovo has managed to make a reference over the years. And it is that its flexibility (that of a convertible, of course) makes these equipment the ideal option due to its adaptability to the most diverse contexts, from using them as a conventional laptop to as a tablet, thanks to its 360 degree hinge, going through putting them in lectern mode to hold a video conference or to enjoy audiovisual content.

With sizes that go from the 13.3-inch Lenovo Yoga 6 to the 16-inch Yoga 7IIn this case we see two models that have made the leap to Alder Lake, but we also find an option for which AMD has been chosen. It is always appreciated to see how manufacturers take into account all the options when preparing their catalogs.

The arrival of the new Lenovo Yoga to the market is scheduled for the second quarter of 2022. 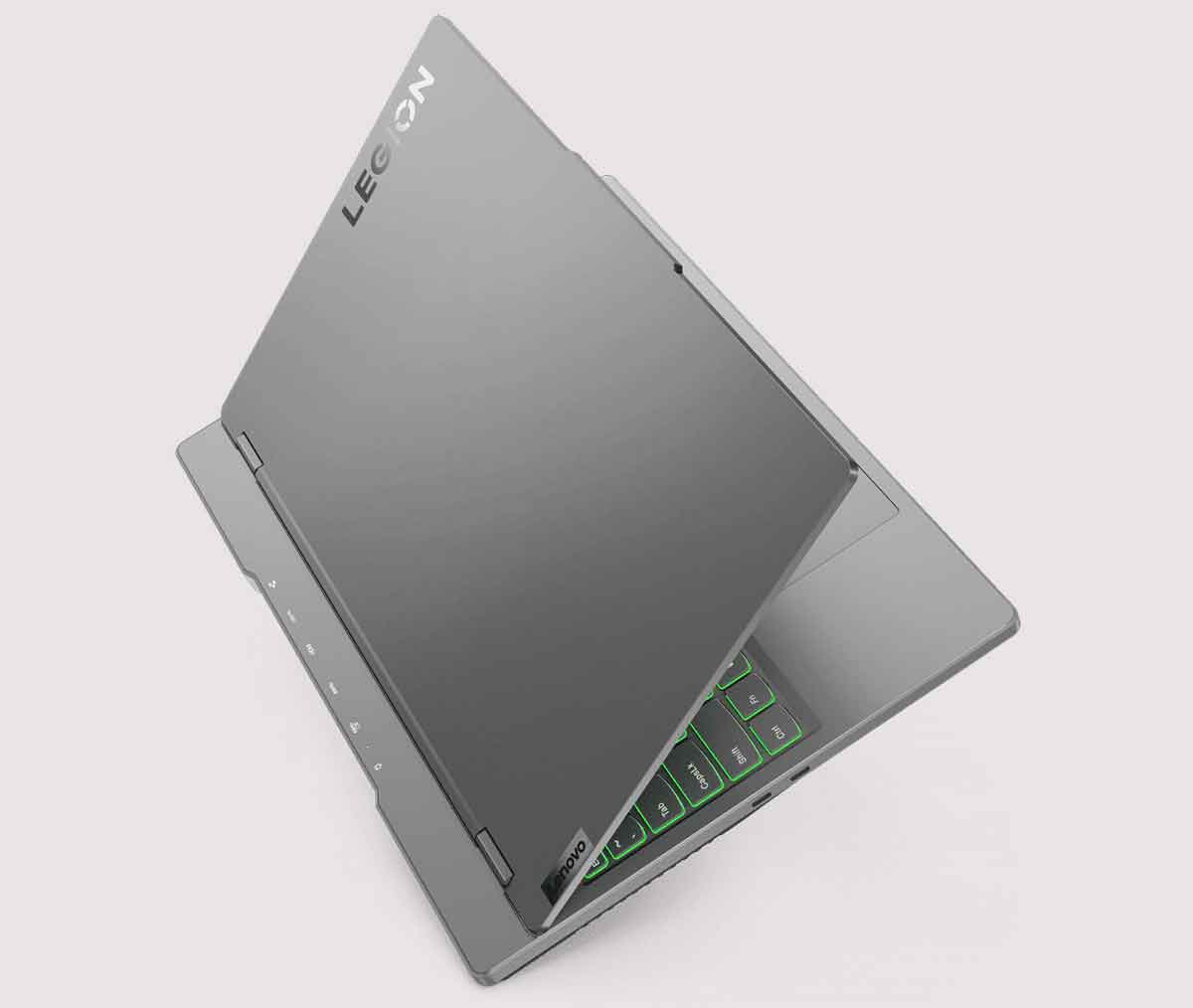 Lenovo’s most gaming range also has interesting news at CES 2022, specifically with the renewal of four models, the Legion 5 Pro, Legion 5i Pro, Legion 5, and Legion 5i.

The two models with the last name Pro have a screen 16-inch IPS WQHD + (2,960 x 1,600 dots) with an adaptive refresh rate of up to 240 hertz with support for Dolby Vision and Nvidia G-Sync. and they are certified Gold Label TUV Rheinland High Gaming Performance which substantially reduces the effects of blue light. They represent 100% of the sRGB space and comply with the HDR 400 standard.

As for its interior, we will find options based on both the 12th generation Intel Core (Intel Core i7-12700H) and the AMD 6000 series (Ryzen 9 6900HX), accompanied by graphics adapters GeForce RTX 3070 Ti Mobile, components that are populated with memory DDR5 RAM at 4,800 megahertz and up to 1 terabyte of PCIe Gen4 SSD storage. To power the set, it has an 80Whr battery that, with Super Rapid Charge technology, allows an 80% charge of the battery in just 30 minutes.

With regard to his “little brothers”, what we find are screens of 15-inch IPS with WQHD resolution (2,560 x 1,440 dots) and refresh rates of up to 165 hertz, capable of representing 100% of the sRGB color space at 300 nits of brightness and compatible with Dolby Vision.

Legion 5i models are supported by processors Intel Alder Lake (up to Core i7-12700H), while the Legion 5 do it in the AMD 6000 series (Ryzen 7 6800H). Regarding its graphic section, we will find models with both NVIDIA GeForce RTX 3060, and a specific edition that amounts to GeForce RTX 3070 Ti. 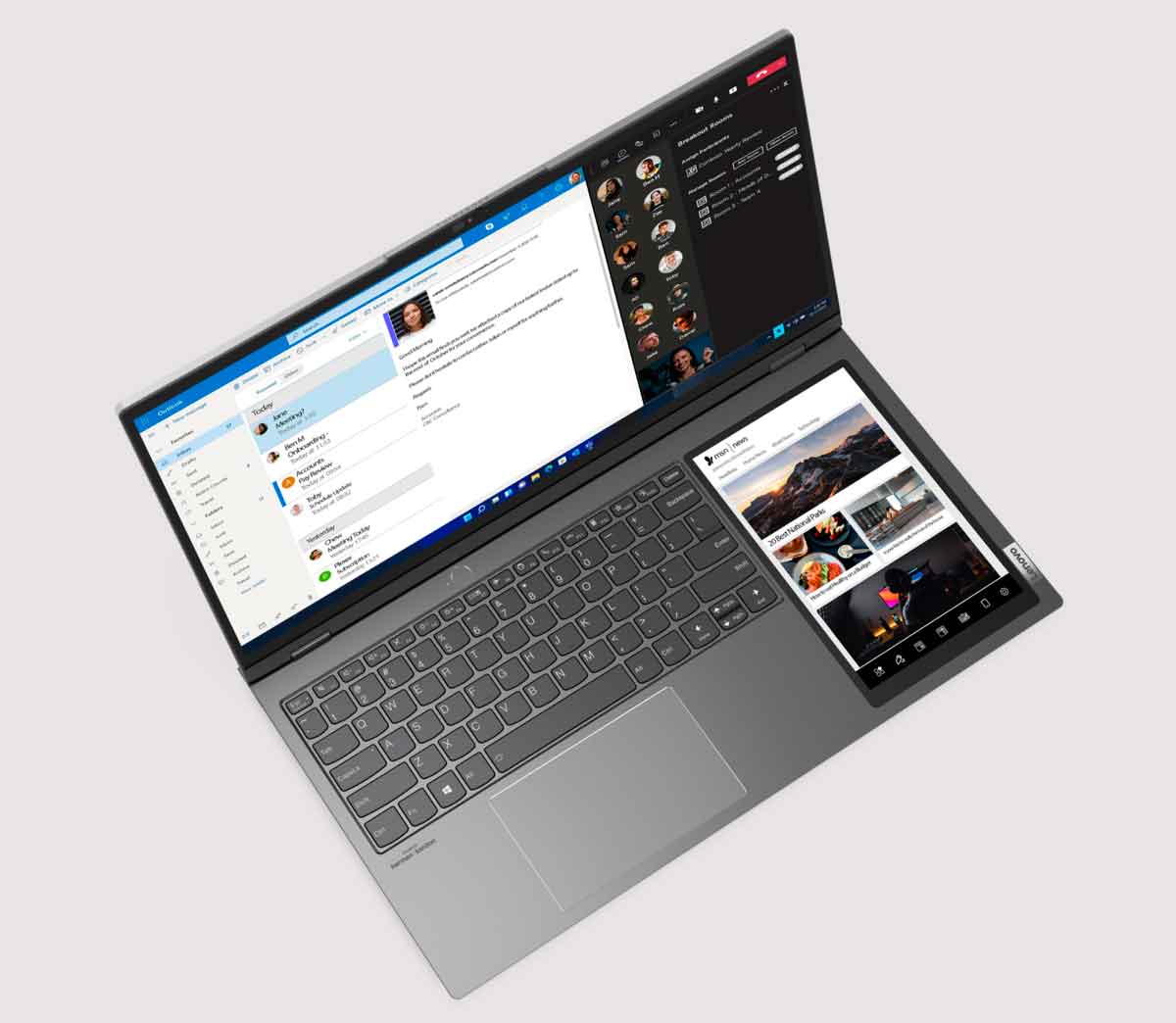 The ThinkBook family has also been updated at this CES 2022 with several new computers, among which undoubtedly this third generation of ua proposal as innovative as the Lenovo ThinkBook Plus. And it is that if their predecessor models already raised the use of an electronic ink touch screen first, which in the second generation added a second IPS touch panel.

In this third generation the approach of two screens is maintained, but this time the main one has the default location, but the second, tactile, takes up the space normally reserved for the numeric keypad (on keyboards that have it, of course). That is, we will have a second screen, with deeply contextual functions, to the right of the physical keyboard.

In Lenovo’s words, the function of said eight-inch secondary screen is improve productivity by offering a space for the application tools that we are using (like the now-defunct Touch Bar on MacBook Pro), a chat window during video conferences, a notepad during meetings, a drawing space, a calculator, the content of a smartphone screen, and so on.

For the rest we are talking about a high-end system, with a screen of 17.3 inches with a resolution of 3,072 x 1,440 dots, based on the twelfth generation of Intel Core and that can scale up to 32 gigs of LPDDR5 RAM and two terabytes of SSD storage. 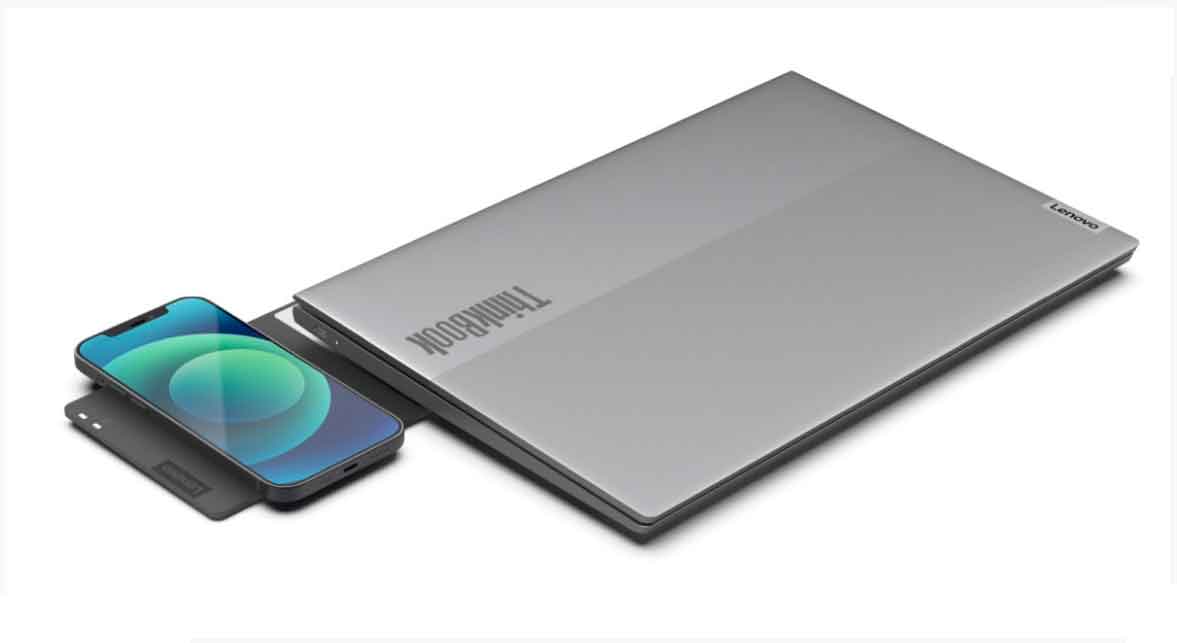 And we continue with the most striking news within the ThinkBook family, now with this second-generation 13x, whose main uniqueness is that Features a wireless induction charging tray That we can use to recharge other devices while we are using the computer. It is capable of supplying up to 65 watts to other computers that support wireless charging, which is increased by an additional 10 watts with phones or other devices that support Qi wireless charging.

For the rest we are talking about a lightweight laptop, barely 1.2 kilos, with a 13.3-inch IPS screen and a resolution of 2,560 x 1,600 pixels in an aspect ratio of 16:10. It offers a brightness of up to 400 nits and can optionally be tactile. Regarding its flexibility, its hinge allows it to be opened up to 180 degrees.

Inside we will find Alder Lake-U processors, accompanied by up to 32 gigabytes of LPDDR5 RAM and storage of up to 2 terabytes M.2 PCIe Gen 4 SSD. Its wireless connectivity is supported by WiFi 6E and Bluetooth 5 and, as regards its ports, it has two Thunderbolt 4 connectors and a mixed minijack (headphones and microphone). This whole set is supported by a 56 Whr battery with fast charging functions. 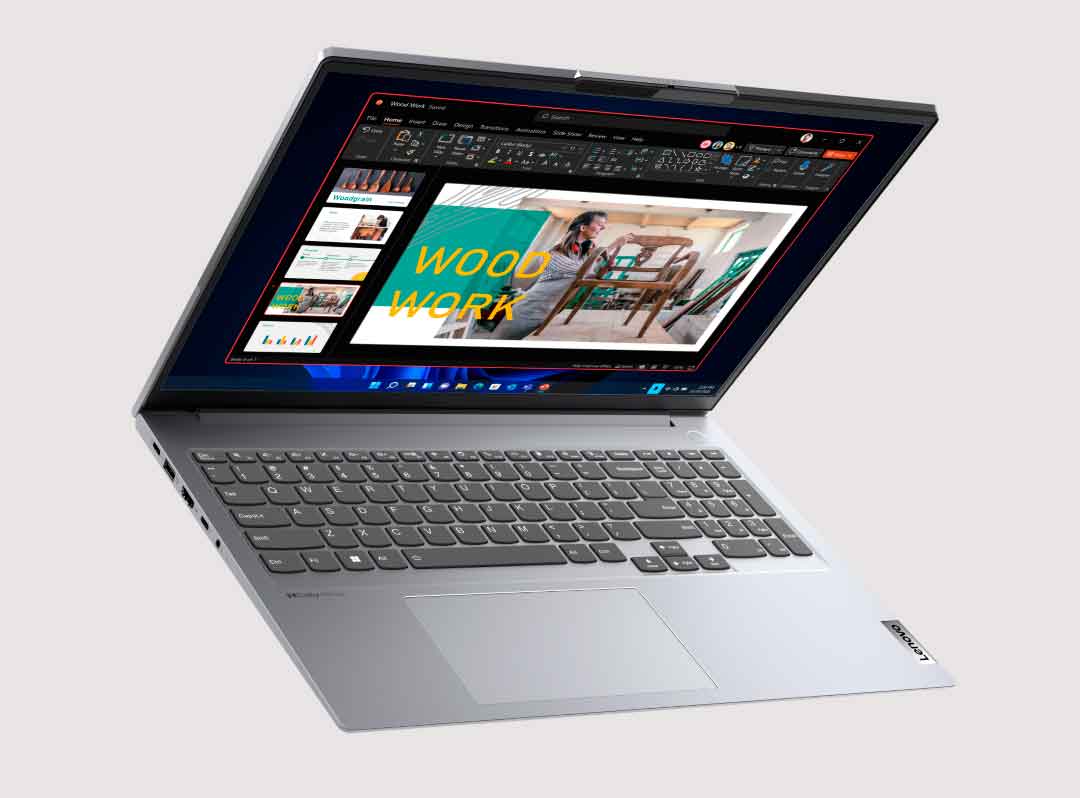 Not everything was going to be experimentation in the Lenovo ThinkBook family, and models 14 and 16 are proof of this.

As for its interior, Lenovo has chosen Intel Alder Lake-H, acPaired with the newly introduced NVIDIA GeForce RTX 2050 Mobile, which provides an excellent efficiency-performance ratio. The system is completed with up to 32 gigabytes of RAM and up to two terabytes of storage NVMe PCIe Gen 4 SSD. It has WiFi 6E, Bluetooth 5, a Thunderbolt 4 port accompanied by several USB ports both A and C. The set is powered by a battery up to 62 Whr with fast charge function.

For its part, the Lenovo ThinkBook 16 coincides in quite a few points with its “little brother”. Its main difference is the size of its screen, which in this case is 16 inch, which in this case does not offer the possibility of 2.8K resolution. Instead, it offers a choice of 2.5K (2,560 x 1,600 pixels) at 120 hertz with 350 nits brightness and calibrated sRGB 100% space rendering; a similar model but whose screen has not been calibrated; and a third option WUXGA (1,920 x 1,200) with a brightness of 300 nits.

Europe’s Internet is under threat, submarine cables will eventually run out

Free: a huge outage paralyzes the network, subscribers are deprived of the Internet

How to create and use restore points in Windows 11