The famous line of laptops will now be entitled to the all new Ryzen PRO 6000, for levels of performance and security never seen on these devices.

Laptops made from recycled materials are all the rage these days. A trend that has not escaped Lenovo; the Sino-American multinational takes the opportunity to apply this philosophy to its new ThinkPads Z13 and Z16, the latest representatives of its flagship range.

Much like Acer and Dell, Lenovo has effectively opted for recycled materials in the packaging and the power adapter. The chassis is also constructed from 75% recycled aluminum, but that’s not the coolest point about these new ThinkPads.

What is already more exciting is that they will be among the very first devices equipped with the new AMD Ryzen PRO 6000 series. They will therefore inaugurate the famous Microsoft Pluto chip, which already promises to revolutionize consumer cybersecurity with a set of advanced protection functions in Windows 11.

These two devices have a few other additional commonalities. For example, they will both be entitled to the Dolby Atmos / Dolby Voice pair. They will also be equipped with the same FHD f2.0 camera with infrared function and a fingerprint reader. 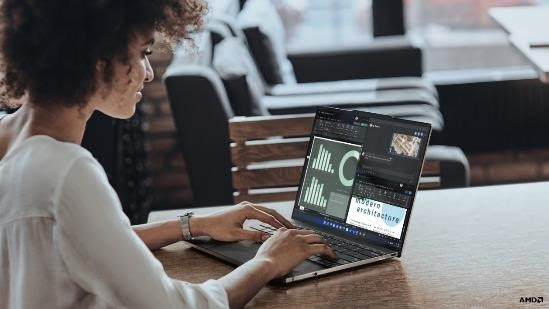 The smaller of the two, the ThinkPad Z13, will benefit from a latest generation Ryzen U-series processor. It will also be possible to boost it considerably with an optional Ryzen PRO 6860Z. RAM level, it will be possible to climb up to 32 GB of LPDDR5. On the other hand, this model does not have any customization option at the level of the graphics card; it will be necessary to be satisfied with the pre-integrated card, of which we do not know the exact chipset.

As for the screen, this ThinkPad Z13 will be entitled to a 13.3-inch panel in a 16:10 format which is rather popular at the moment. Two choices will be available at this level. The first is a low power WUXGA IPS panel, with an optional touch version. The second is much more upscale; future buyers who will opt for this model will be entitled to a 2.8K touch OLED panel with Dolby Vision support which promises to be quite flattering for the retina.

On the other hand, it will also be much more demanding for the 50 Wh battery. Hopefully AMD’s big optimization efforts in terms of power consumption will compensate.

Connectivity level, this model is unfortunately only entitled to two USB-C 4.0 ports and a jack port. A little light for certain uses, in which case you will surely have to arm yourself with a dongle.

Its big brother benefits from an even more solid technical sheet. Here, no Ryzen PRO U or Z; it will be entitled to a Ryzen PRO H series, which should translate into a significant performance gain. The same goes for the graphics, since it will have access to an optional Radeon RX 6500M. What propel it into another dimension compared to the ThinkPad Z13.

It also gains in display area thanks to its 16-inch panel, still at 16:10. The two options are equivalent to those offered on the Z13. You will have the choice between a WUXGA IPS panel with touch option, and a 4K OLED touch panel with Dolby Vision. The size of the battery has of course been adapted accordingly, and thus increases to 70 Wh.

There are also some small, light but very significant changes in terms of connectivity. This time it has three USB-C 4.0 ports, and an SD card reader absent from the other version.

At the end of the day, it looks like we are dealing with some good products in the pure tradition of ThinkPads… which means that they will therefore also be quite expensive, especially for the OLED versions. the ThinkPad Z13 will be available from May / June 2022, from € 1,649 excl., in black, bronze, and Arctic Gray. the ThinkPad Z16, on the other hand, will be available from June 2022, from € 2,249 excl., and only in Arctic Gray color.

Xiaomi wants to revolutionize charging with its new battery