It should be mentioned that the laptop has an RGB backlit keyboard, as well as Sound Blaster Cinema 6+ audio technology. Finally, to highlight its “Engine Boost” button that allows you to configure the performance and cooling profile of the equipment in three modes: Office, Game and Turbo, progressively raising the performance of the equipment but also the consumption, temperature and noise it emits.

The Medion Erazer Beast X30 does not come in a flashy box as you might expect from a 2,600 Euro laptop, but rather a neutral colored hard cardboard box that advertises that there is a laptop inside, but nothing more. In fact, the identification label that we find on the packaging only indicates its SKU, and the name Erazer Beast X30 is not even mentioned.

Inside we don’t find a decorated box or anything, just another smaller neutral cardboard box that contains the accessories, and the laptop protected by expanded polystyrene, neither more nor less. So let’s start by looking at the accessories, which in this case simply consist of the external power supply. The power supply is made by Chicony, a Chinese manufacturer, and has 330 watts of maximum power. Here you have the Medion Erazer Beast X30, whose exterior is initially protected by transparent plastic. The exterior, made of magnesium alloy, gives a very good feeling of quality. The top of the cap is adorned with the name Erazer and nothing else. On the front face we have nothing except some LED status indicators. On the right side we find the required card reader and two USB 3.2 ports, as well as a ventilation grill. On the left side, what we have is a new ventilation grille, another USB 3.2 and the two audio minijacks, in addition to the usual Kensington security lock. We go to the back, where we have two more ventilation grills, a USB-C, an HDMI video output, the RJ-45 connector and the power connector. The integration of the lid hinges is almost minimalist, as is the rest of the equipment. As you can see, externally this laptop does not stand out at all and has a very sober design. We open the lid and the first thing that catches our attention is the large 17.3-inch matte screen, with really very thin frames. The keyboard is chiclet type and has a large touchpad. A label covers the touchpad, indicating that we can turn it on and off by simply pressing one of its corners. This is something very useful, since if you use an external mouse you want to disable the touchpad so as not to accidentally press it when using the keyboard. Most laptops have this function via an Fn shortcut, but it doesn’t hurt to have this direct function.

At the top right of the keyboard we find two buttons: the one on the far right is the on and off button, while the one on the left is the “Engine boost” button that we talked about before, and that will allow us to change the performance and cooling profile of the equipment to be able to adapt it to the needs that we have in each situation. In the upper frame of the screen we find the light sensor, the microphone and the integrated Full HD webcam that, by the way, does not have any privacy mechanism to cover it. Having seen the laptop, we are going to turn it on and configure it to proceed with the tests.

When you turn on the laptop, the status indicator LED located on the power button lights up white, as does the keyboard which begins to light up with an RGB rainbow pattern. This is what the keyboard looks like with normal lighting conditions (in the previous photo it had two 2,200 W white light bulbs pointing directly at it, and thus we see that in bright conditions the lighting is barely noticeable). The Medion Erazer Beast X30 comes with Windows 11 installed from the factory, so as soon as we turn it on, the configuration wizard welcomes us so we can configure the equipment. Once done, we can start working with it. Before starting with the performance tests, we have to tell you that we have detected a fairly important light leak on the screen, next to the frame in the lower left area. This is a factory defect and, if you buy a laptop and it arrives like this, we recommend that you manage the warranty because it is not normal. However, except when the screen is completely black, it is not noticeable at all. Having said that, let’s go now with the performance tests, and we are going to start by showing you the hardware with CPU-Z to see that everything is in order (although we have already listed the hardware that the equipment has at the beginning).

For its part, GPU-Z should show us the two integrated graphics of this Medion Erazer Beast X30, on the one hand the Intel Iris Xe which is the iGPU of the processor, and on the other the RTX 3070 Ti Laptop. However, as you can see in the screenshot, for some reason the software is not able to show us the details of the NVIDIA GPU (you can see in the lower part of the right screenshot that it is selected, but it does not show the details). Let’s go now with the synthetic benchmarks, and we start as always with Aida64 to check the performance of the RAM memory and the processor cache. The performance is as expected for DDR5 RAM at 4,800 MHz, with slightly worse read, copy, write and latency rates than we find in desktop DDR5, partly due to the speed at which they work. The performance of the processor cache is also as expected, so there is not much to say about it.

Let’s now check the memory performance with SuperPia benchmark that will force the processor to calculate 32 million decimal places of the number Pi in a task that uses RAM memory intensively to store the results. The performance obtained in this test is excellent; To put these 8 minutes and 42 seconds in perspective, this is a test that on a top-of-the-line laptop but with DDR4 it takes more than 11 and a half minutes, while on a desktop PC with DDR5 it takes just over 6 minutes.

We are now going to measure the performance of the storage unit that integrates this laptop, made of Samsung and with NVMe protocol and PCI-Express 4.0 interface. For this, as always, nothing better than Crystal Disk Mark. The performance that it offers us is not that it is exceptional, especially in terms of writing speed, denoting that, of course, they have not used the best SSDs of the Korean firm. Let’s see what it tells us Crystal Disk Info about the SSD. The unit used is Samsung MZVL21T0HCLR-00B00which corresponds to a PM9A1, an SSD that the manufacturer only sells to OEMs, as is the case, and whose theoretical speeds are 7,000 MB/s for reading and 5,100 MB/s for writing, so now the figures for performance that we have seen before, although it is true that they are actually quite below what was “promised”.

Let’s leave aside the individual benchmarks for now and we are going to see a more global spectrum, so that we can appreciate how this Medion Erazer Beast X30 behaves as a whole. To do this, let’s start by looking at the team’s performance with PC Mark 10a benchmark that will tell us how the computer behaves in general tasks such as web browsing, office automation, multimedia, file compression, etc. These 3,216 points obtained in the test have really left a bad taste in our mouths, and that is that a team like the ASUS ROG Zephyrus Duo 16 that equips an AMD CPU and DDR4 memory obtained 5,851 in the same test, and it is almost double. Why has this happened? We don’t really explain it to ourselves, because the hardware in this laptop should be equal to or better than the other one.

Let’s see what happens when we put the equipment through 3D performance tests, in this case with 3DMark.

Now yes, the performance in this benchmark is what is expected for a laptop with an RTX 3070 Ti Laptop, and it indicates that we can enjoy all the latest games without problems at a good FPS rate. For example, 3DMark itself is already telling us that we could play Battlefield V at a resolution of 1440p and with all graphics maxed at a rate of around 100 FPS or more.

However, this is something we are going to test for ourselves next. We’ve tested the Medion Erazer Beast X30 with some of the latest games to hit the market, always at maximum graphics settings and at the screen’s native resolution of 1440p. This has been the result. As you can see, the performance in games is optimal, and even in the demanding Cyberpunk 2077 we have obtained an excellent 60 FPS on average, thanks in part to the fact that the graphics of this laptop is compatible with NVIDIA DLSS technology.

To finish, and before proceeding with the conclusion, we want to tell you about our feelings and the general behavior of the team. The Medion Erazer Beast X30 has been very reliable in any type of task that we have carried out with it, delivering excellent performance for all types of daily tasks (for games, you have already seen that it also moves with ease). The feeling it has given us is that it is an agile team, and with its size and weight it is very comfortable to carry from one place to another.

However, there is a drawback and that is that, although at no time have we noticed performance drops due to Thermal Throttling, we have noticed that when we put the equipment under load, it becomes quite noisy because its internal fans, blower type, they are running at full speed. We have also noticed that the device gets quite hot, to the point that it becomes a bit unpleasant to have your hands on the keyboard due to the heat generated.

The Medion Erazer Beast X30 has proven to be a real beast to be able to play any modern game anywhere, and with all graphic settings maxed out. It has a great solvency to carry out any type of task that is required of it, and all in a device that is relatively compact and light, but of course of great construction quality and robustness. The main downside of this device is its operating temperature, which can sometimes be annoying if you play with the laptop’s own keyboard, but it is the price to pay for having a device with high-end hardware in a compact and lightweight.

One of its strong points is of course the screen, because it is a joy to be able to have a matte IPS panel with a resolution of 1440p at 165 Hz in 17 inches on a laptop and that its GPU is capable of moving anything that is put in front of it at a good FPS rate.

Therefore, we believe that this is a full-fledged gaming laptop and that in terms of performance and portability, it will not disappoint anyone. For this reason, we believe it deserves our gold award, as well as our recommendation for both its design and performance. 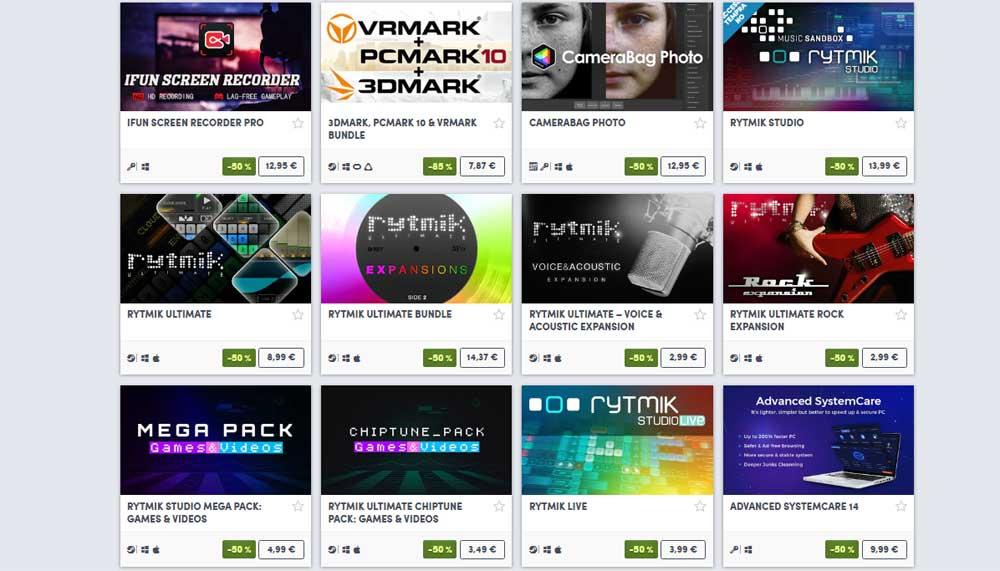 Edit photos and videos, optimize Windows and much more with these offers Can you play “okay” with an integrated graphics card?