Since I created my first mind map, more than a decade ago, I am a staunch advocate of mind mapping as a key tool to bring order in something, starting so chaotic, as is our own thinking on many occasions, sometimes in a totally natural way (when ideas accumulate in our heads), and others when we ourselves are the ones who press for it to be so, for example when brainstorming.

In the latter case, for example, the key is to spend a few minutes around a central concept, let out all the ideas that come to mind, without applying the filters to which we usually submit them. And it is that, on many occasions, it is possible that the parameters that we use to filter these ideas are not well adjusted, so it is possible that we are discarding ideas that, by themselves or with a bit of polishing, actually yes make them good ideas.

Now, what happens when we finish a brainstorm? Well, surely we will have a huge (and chaotic) list of ideas and concepts, captured on the screen or on paper as they have emerged, in a document whose consultation can result in a headache. This is one of the many cases in which a mind map will be of great help to structure and order properly all those ideas, turning a huge messy list into a map that allows us to structure them, review them and, in this way, keep them up to date.

From personal projects to the most personal, a mind map can always be of great help.

This does not have to refer exclusively to a group of people. When we talk about brainstorming we usually think of a room (face-to-face or online) full of people, but also a single person can carry out this process, and rely on a mental map both during it, and afterwards with the notes that you have been able to take. Moreover, in one-person creative processes, most of the time we will be able to make the mental map during them, with the added advantage that, on many occasions, see the ideas already annotated and organized on the map, it will help us to have more ideas.

To give a very personal example, like almost all people who are professionally dedicated to writing, I have the eternal project of writing a novel (several, actually, my forty-something give me to have already had several ideas about it). And although at the moment all ideas remain in that state, ideas, whenever I have wanted to start developing any of them, I have done so with mind maps. A mind map for each idea, and on all occasions it has helped me with something that personally seems to me to be key: clarify my own ideas.

But you don’t have to go to activities as bohemian and creative as writing a novel to use this powerful tool. For example, let’s imagine that after years of working for someone else, you have obtained the necessary capital and are going to start your own business, in the hospitality field. You know you want it to have multiple branches, but you need to organize them properly. The result of putting those ideas on a mind map could be something like this: 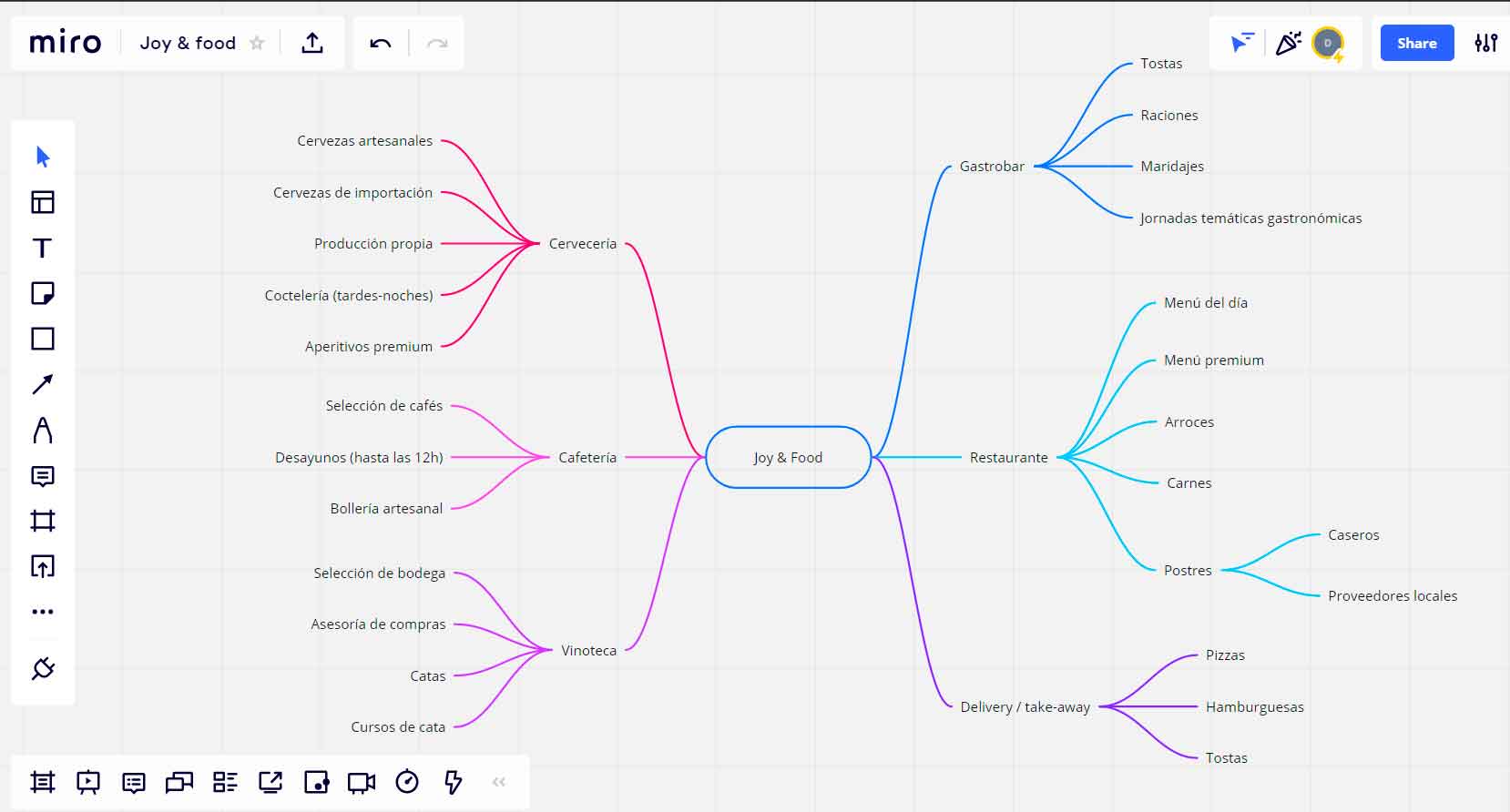 As you can see, the mind map starts from an initial node, and from there branches begin to unfold, which in turn can have sub-branches hanging, and so on to the necessary depth level. Obviously we can modify the nodes, add new elements, change the branch from which they hang, and so on. The flexibility they provide us is total, and therefore does not limit our possibilities to reflect and organize ideas..

In this point you may be wondering that you can get the same with a traditional scheme of text, of the style:

In a first analysis, both the mind map and the schema present and organize the same information. Nevertheless, the strict structure of a schema can act as a limiting factor when it comes to letting ideas flow. Its totally sequential model, compared to the randomness of visualization and editing offered by a mental map, will surely lead us to think first only about the brewery, then only about the cafeteria, and so on until the last of the sections that we want to develop. Unconsciously we will think sequentially, conditioned by the structure of the scheme.

On the other hand, when it comes to visualizing the set of ideas, modifying them, adding others that come to mind later, eliminating those that we consider to be better to discard, etc. a mind map provides us with a much more conducive environment for editing. For example, deleting or adding a second or third level branch will not force us to renumber the rest of the elements of the scheme and, at the same time, we will have a global view of the project, which will allow us to see if, for example, add snacks in the gastro-bar it duplicates what we already have in the brewery, either to discard or to connect them:

Links between nodes, a sample of the multidimensionality of mental maps.

As you can see, the mind map is multidimensional, unlike schema, which is always one-dimensional and therefore much less flexible. This does not mean and should not be understood as a criticism of the schemes, far from it, but when trying to combine the creativity of a brainstorm or similar processes, with a system that allows us to order the chaos, it is undoubted that a mind map is much more practical and effective.

If you have never used a mind map yet, I highly recommend that you do so if you need to organize ideas, concepts, projects, and so on. In my case, as I mentioned at the beginning, I have been using them for years, first as PC applications, and later in its form of cloud services, since this way I can share them more easily with other people, which can also be added to the creative process, thus establishing a virtuous circle.