Increasingly popular in both work and personal settings, MINISFORUM has just officially introduced and opened the sale of your Elitemini TH60 Mini Desktop PCequipped with the eleventh generation of Intel processors based on the Tiger Lake architecture.

With a compact body, the Elitemini TH60 barely reaches un size of 18.28 x 17.78 x 3.55 millimetersenough to hold a full set with interior space for up to 64GB of DDR4 memory (with two SODIMM slots), one PCIe 4.0 slot for solid-state storage, as well as an M.2 2230 slot, occupied by a wireless card as standard. In addition, unlike other models, we will also have a fan inside the box to maintain active cooling. 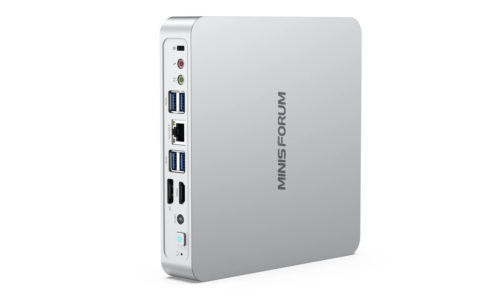 Although without a doubt its greatest attraction comes from its processor, equipping a 6-core, 12-thread Intel Core i5-11260H with support for speeds up to 4.4 GHz, capable of delivering more than decent CPU performance to support any work and daily usage tasks. However, although we will be able to use it, it is worth mentioning that this mini PC is not so prepared for games or video and graphics rendering jobs, since will exclusively feature integrated Intel UHD graphicswith 16 execution units instead of the higher performing Iris Xe graphics.

So, how could it be otherwise, this mini PC has a wide section of connectivity, offering an HDMI port and a USB-C compatible with the reproduction of content up to 4K at 60 Hz, and a third display port up to 8K at 60 Hz, (4K at 60 Hz). In addition, we will have four USB 3.2 Gen 2 type A ports, a USB 3.1 Gen 1 type A port, as well as a microphone input, an audio output and a 3.5 mm headphone jack, as well as an Ethernet port 2.5 Gbps for Internet connection.

Currently the MINISFORUM Elitemini TH60 is available through the brand’s official website, with an introductory price of $639 for your model with 16 GB of RAM and 512 GB of solid-state storage. Although the company is currently offering a small discount for early adopters, lowering this mini PC to $539 for those who make a reservation before its release and first shipments at the end of May.

How many Mission Impossible movies are there and how many are there going to be?

Cheap Apple AirTag: where to buy the object tracker at the best price