Nintendo posted an alert on social media. The firm expects a drop in the availability of its servers during the Christmas weekend. It asks users to create their account upstream in order to be able to play during the few days following December 24. Disruptions are also to be expected for the Switch Online service.

For several months now, we have expected that there will not be many next gen consoles under the tree. This morning again, we are doing a rather sad report in our columns. There won’t be enough consoles for everyone because of the shortages. The PlayStation 5 is concerned, of course. The Xbox Series X too. But also the Switch OLED, the latest Nintendo that we tested at length for its launch.

However, France is certainly not the best off when it comes to the availability of certain consoles. It seems almost obvious that Nintendo has favored other markets. Inventories of OLED Switch will logically be more abundant in the United States and especially in Japan. And given the scarcity of some consoles at Sony and Microsoft, the classic Switch and Switch Lite may well benefit.

Nintendo is preparing for overloads on Switch servers

And Nintendo is preparing for it. Because the Japanese firm has published on social networks an alert message for its new users. In this message, she believes that there will be overloads on servers linked to the Switch. In particular those which are dedicated to the management of Nintendo identifiers. They will be the first to welcome new players who will have to create their login to access all online services. 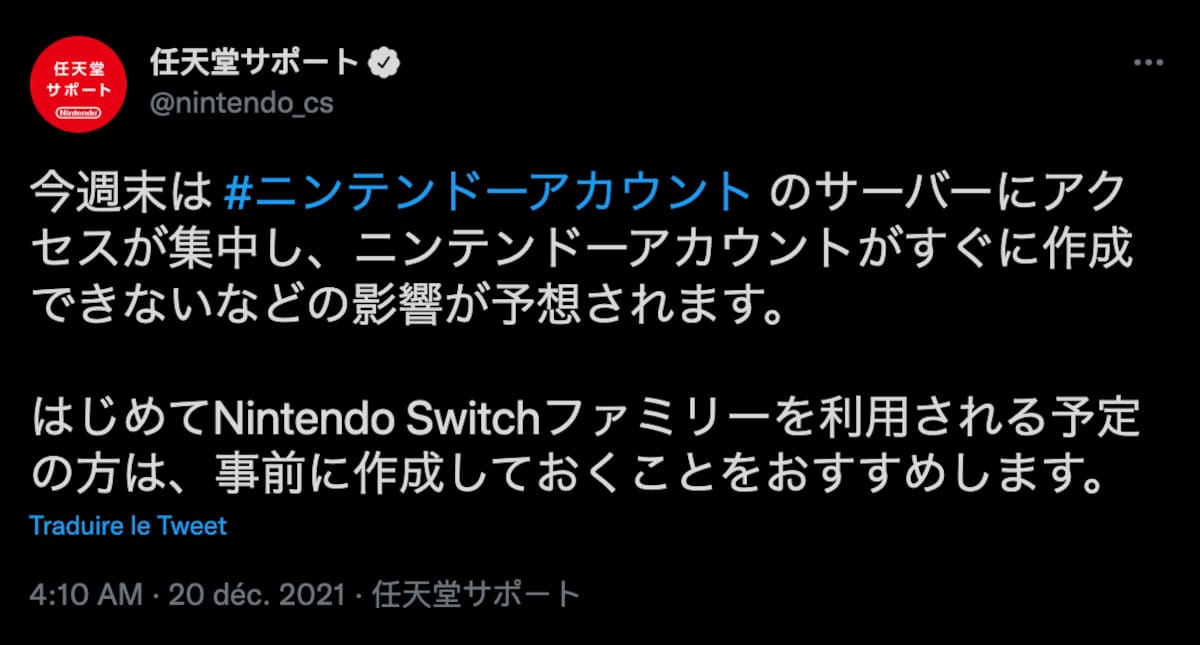 Nintendo therefore advises all players who wish to create a Nintendo Account to do not wait until the last moment to do it, but rather to do it now. From December 24 until the end of the weekend, it should be difficult to finalize a secure Nintendo Account. Latecomers will therefore have to wait until the peak of traffic is over to take full advantage of their new console. Of course, planning to create an account will be difficult for anyone who does not yet know if they will have a Switch at Christmas …

Server overload should also affect all other Switch online services. We are of course thinking of the Nintendo Switch Online service (as well as all multiplayer game servers), but also of the Nintendo eShop store which allows you to download games and demos. In other words, plan to play offline for a few days.

Rumors of a 14-inch iPad are back

Succeed on Halloween with the best Squid Game costume

Three mistakes that can ruin your Wi-Fi connection