The presentation of the Apple M1 Max was quite a surprise. With this chip, the company of the bitten apple showed that it has been able to develop a powerful, efficient and highly scalable architecture, not only because of the possibilities it offers in its current conception, but also because of everything it could give of itself in an implementation of type MCM (multichip module).

It is very easy to understand. The Apple M1 Max SoC has a 10-core CPU and up to 32-core GPU (4,096 shaders), but if Apple combines two or more M1 Max SoCs using an interconnect system you could create a block with a much more powerful configuration. This is the approach that, according to The Verge, the apple company could follow to renew the Mac Pro without having to resort to Intel. A very interesting approach, and perfectly viable, all be said.

The leap in graphics power that the Apple M1 Max SoC has managed to make has also generated a lot of buzz. It is perfectly understandable, after all, said chip offers a gross power in FP32 of 10.4 TFLOPs, but this does notIt has once again led you to the classic error of thinking that teraflops allow us to assimilate, without further ado, the graphic power of two different GPUs, and it has made some dare to say that “the Apple M1 Max chip surpasses the PS5 in graphics power”, and even “that it could move its games without messing up.” These sentences are not only not true, but they represent two blunders, and let’s see why.

Apple M1 Max and PS5 GPU: Beyond the TFLOPs

The graphic performance of a system is not determined, in an absolute way, by the peak that it can reach in FP32, that is, in single precision floating point operations. This is just one more piece of information that is used to estimate, roughly, the power of a GPU when performing certain tasks, and it is of greater importance when we move in scientific fields, and not in games.

To say that one GPU has more graphics power than another because it has a slightly higher peak of TFLOPs is a real nonsense, since we are omitting aspects as important as the complexity of the geometry which could represent a GPU on stage, the technologies it supports, its compatibility at the software level and graphics APIs and many other keys inherent to graphic architecture.

Nor can we say that because one GPU shares the same pixel fill peak it is more powerful than another since, according to that logic, the GPU of the Apple M1 Max, which reaches 164 gigapixels per second, would be at the level of an RTX 3080 in games, which has a peak of 164.2 gigapixels.

With the above, we already have a fairly clear idea of ​​why it is a manual error to say that the Apple M1 Max has a GPU with greater graphics power than PS5, but this is only the tip of the iceberg. The PS5 GPU has specialized hardware which can speed up ray tracing, something the Apple M1 Max’s GPU lacks. Therefore, it does not have a key hardware to move very demanding games, such as Metro Exodus Enhanced Edition or Spider-Man: Miles Morales, which use ray tracing.

The Impact of Running Ray Tracing on Non-Specialized Hardware it is so big that it already completely destroys that assertion. The GPU in the Apple M1 Max does not have anywhere near the same graphical power as the GPU in the PS5, and it would not be able to run its games without messing up, in fact it would end up crawling to move to slideshow mode those that use ray tracing, of that I am convinced. 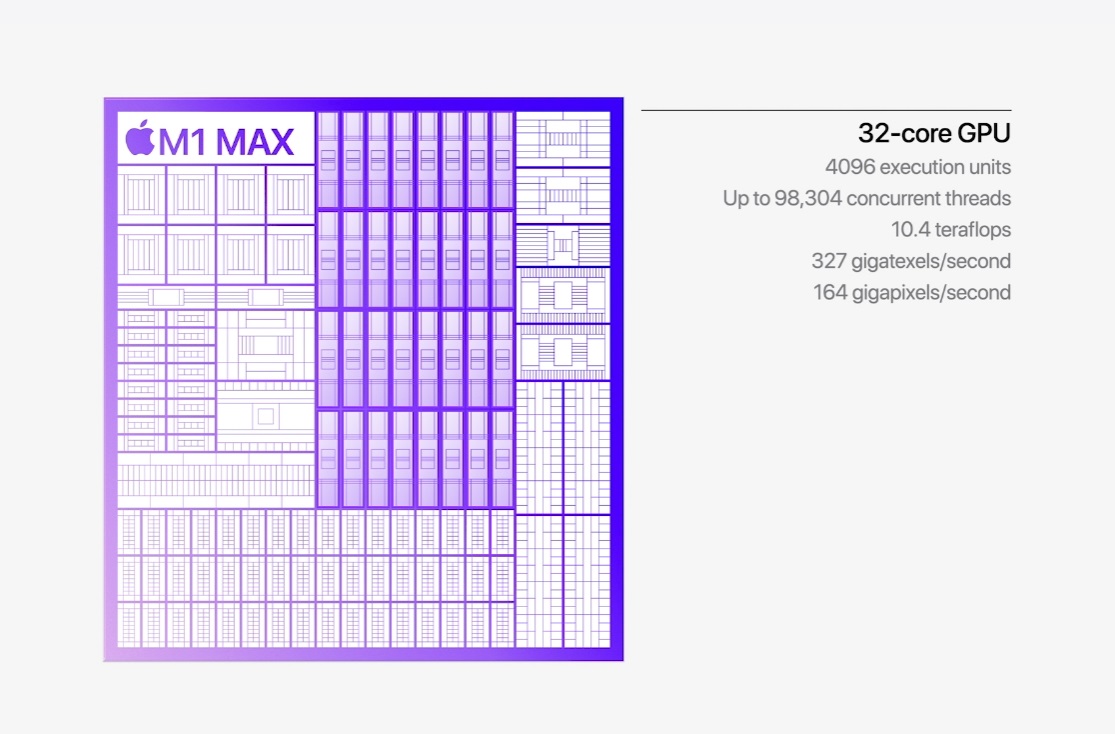 I do not want to leave room for possible misinterpretations. I think that the apple company has made an important advance with the Apple M1 Max SoC, and that the performance offered by this chip at the graphical level it’s amazing for an integrated GPU. The problem is in those comparisons that are meaningless, and that above are accompanied by errors that only generate false beliefs.

The numbers do not lie, and the reality of each GPU has been clear, but we must bear in mind, in this sense, that a PS5 has a graphic solution designed, and specialized, in games, and that the GPU of the Apple M1 Max does not have that objective, but is more focused on the professional sector. It should also be remembered that they use different architectures, and therefore it is not fair to compare them directly.

We could do many comparisons of this type, and according to the logic of the TFLOPs that some follow, a Radeon R9 Fury X, which achieves 8.6 TFLOPs, it would also be almost as powerful in games as an RTX 2070 Super, which achieves 9 TFLOPs. Obviously this example is absurd, since the second it yields 72% more and on top of that it has hardware dedicated to speed up ray tracing. However, I wanted to share it with you to reinforce that absurdity of letting ourselves be carried away, still, by the TFLOPs.

Let’s be serious Let’s forget about that rule of TFLOPS = absolute power in games, since nowadays it is a myth more false than ever, and let’s try not to make absolute and blunt assertions if despite having the official information “on the table” we are not sure of knowing how to interpret it, that in the end these things happen, and we create false mantras that do no good to users.

Bouygues Telecom further increases its mobile prices, but all is well this time

PC Manager is a cleanup tool for Windows made by Microsoft

Discord brings forums back to life for nostalgic gamers