Although it may seem obvious, the market for graphics cards and their price is not in stores or directly from brands: it is on second-hand websites. The stores hardly have stock and when they acquire it, it flies, so the most reliable indicator is not them, but websites like eBay, because in the end these cards end there. This report is based on the prices that can be found precisely on that platform and states that the trend is now negative, will the stock return?

Article Index
GPU prices are reduced by 10% on average, what are the reasons?
Fewer GPUs are sold in stores and second hand

GPU prices are reduced by 10% on average, what are the reasons?

Several factors are causing the GPU market to begin to take the shape that AMD and NVIDIA, along with assemblers, want. GPU prices have skyrocketed, stock is nil, and reselling is working with those who don’t want or can’t wait any longer for one of the newer GPUs.

Therefore, that in the height of summer the prices of GPUs begin to fall is a very clear symptom of a reductionist trend that can only be hindered by only one of the factors: cryptocurrencies. And here the arguments begin, since Ethereum has stabilized its value after a decline at the same rate as Bitcoin. The second factor is linked to the first and they may change their order, since the LHR series of graphics cards with the new RTX 3070 Ti and the RTX 3080 Ti As new applicants they leave room for the specific range of models to mine with their HX GPUs.

Surely this has influenced, as well as the announcement of NVIDIA to increase the stock of GPUs for manufacturers and with it that they can put more cards on the market. It may be a combination of everything, but the truth is that some specific models are already being seen in stores like PCC or Amazon at high prices, but reasonable for the market.

Fewer GPUs are sold in stores and second hand 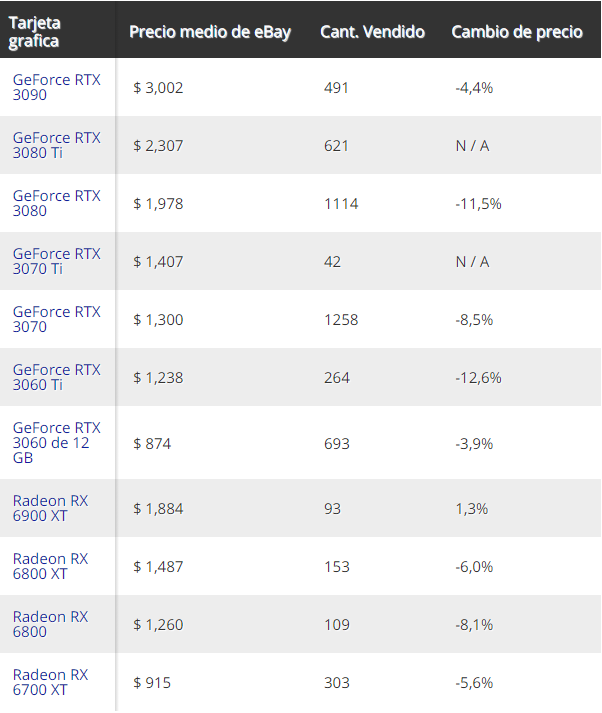 The rise of the Chia cryptocurrency may also be another reason for GPUs to have a breather and the market is relaxing and gradually returning to normal levels.

If you are not convinced by Windows 11, try this new Linux