Digital Foundry has published an interesting and complete video review where they test NVIDIA DLSS 3, a major update to the well-known image rescaling and reconstruction technology that is now capable of generating frames using artificial intelligencesomething that, as we told you at the time, helps improve performance even in situations where the CPU acts as a bottleneck.

This is one of the most important keys of NVIDIA DLSS 3 because when we activate this technology, the base resolution from which a game is rendered is significantly reduced. This improves performance by reducing the number of pixels in the scenebut at the same time increases CPU impact and may end up creating a bottleneck.

It’s not hard to understand, when we activate the technology NVIDIA DLSS 2 or DLSS 3 in performance mode only half the pixels are rendered horizontally and vertically at the target resolution, which means that If we want to play in 4K, the base resolution will be 1,920 x 1,080 pixels.. Starting from that resolution the CPU has a big impact because the GPU is not really working with more than 8 million pixels, but it is only moving something more than 2 million pixels.

To improve performance it was not possible to further reduce the resolution render base and improve the quality of the rescaling and reconstruction process, since that bottleneck at the CPU level would be more and more serious. That is why with the arrival of NVIDIA DLSS 3, the green giant has introduced the generation of frames based on artificial intelligence, a technology that uses two sequential frames to create an intermediate frame without resorting to the CPU and without starting from a certain number of pixels.

all that frame is created on the GPU without a previous pixel basea, something that is possible thanks to that analysis of two sequential frames rendered in a traditional way, and the combination of motion vectors and Optical Flow Field technology. All this process is accelerated in the Optical Flow Accelerator hardware present in the GeForce RTX 40, and it is an exclusive technology of that generation because, according to NVIDIA, said hardware is twice as fast and much more precise than the version present in the GeForce RTX 30.

With frame generation present in NV IDIA DLSS 3, the green giant has managed to overcome one of the most important limitations that occurred when reducing the base resolution to rescale and rebuild to a higher one. I am talking about that bottleneck at the CPU level that I have explained to you before, and that explains why NVIDIA has hit the target by introducing the generation of frames through artificial intelligence. Digital Foundry indicates in the video that NVIDIA DLSS 3 technology can offer an improvement of up to 500% versus native resolution.

When generating an intermediate frame noticeably improves the fluidity of the game and this is clearly noticeable, you only have to see the part of the beginning in which Digital Foundry shows us the animations of Spider-Man with and without the generation of frames activated. The difference is substantial, and in terms of performance the jump is enormous, so much so that you can easily double the performance in this title. 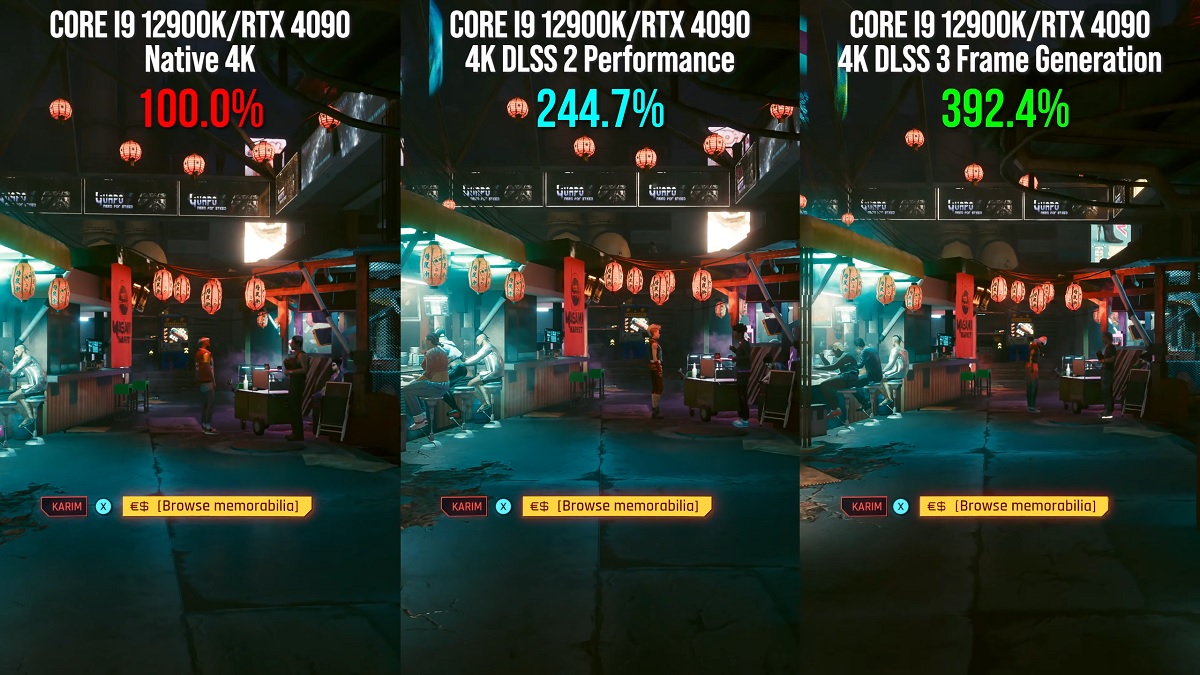 For example, in Cyberpunk 2077 with maximum quality and ray tracing set to “psycho” we see that the GeForce RTX 4090 outperforms the GeForce RTX 3090 Ti by 248%. The first used NVIDIA DLSS 3 and frame generation, while the second used NVIDIA DLSS 2. If we just compare the performance difference between native resolution and DLSS 3 we see that this improves performance by up to 399% also in Cyberpunk 2077 with the same settings, while the improvement that DLSS 2 gets is of a 261%.

As we have said, NVIDIA DLSS 3 helps to improve performance when CPU limited situation occurs, but if we use a low performance processor we will have stuttering problemsie desynchronization in the generation of frames, and this can completely ruin our experience when playing, so we must take it into account. It will do us no good to mount a GeForce RTX 4090 next to a processor that is unable to feed it properly. 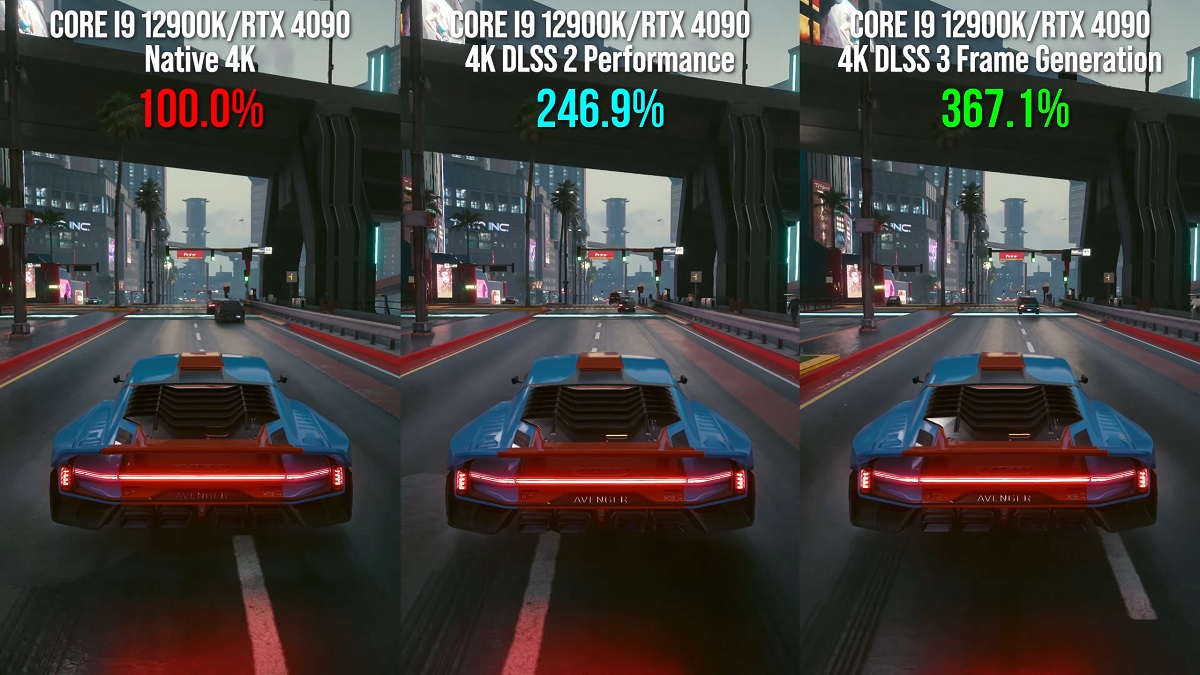 In RTX Portal is where we see the most spectacular performance gain, and that is that thanks to NVIDIA DLSS 3 and the generation of frames we can achieve an improvement of up to 560% versus native 4K resolution, using a GeForce RTX 4090 in both cases. Compared to DLSS 2 we see that DLSS 3 triples the performance in said game.

Frame generation: what value does it provide, what effects does it produce and what image quality does it offer

Digital Foundry also explains why we need frame generation. A priori the answer seems simple, because it allows us to improve performance and because deep down it is almost a natural evolutionary step starting from the base laid by DLSS 2, but there are other things to take into account. One of them is the improvement in the fluidity of animations, and we have another in the boom of the screens with high refresh rateswhich require very high frame rates per second to develop their full potential.

A rasterized game with a “traditional” technical base is not currently a challenge thanks to DLSS 2, not even in 4K, but if we introduce ray tracing into the equation things change. That’s where DLSS 3 comes in, and that’s where it makes a huge difference. On the other hand, it also allows us to improve performance even in scenarios where there is a bottleneck at the CPU level, a problem that is very common in games today. 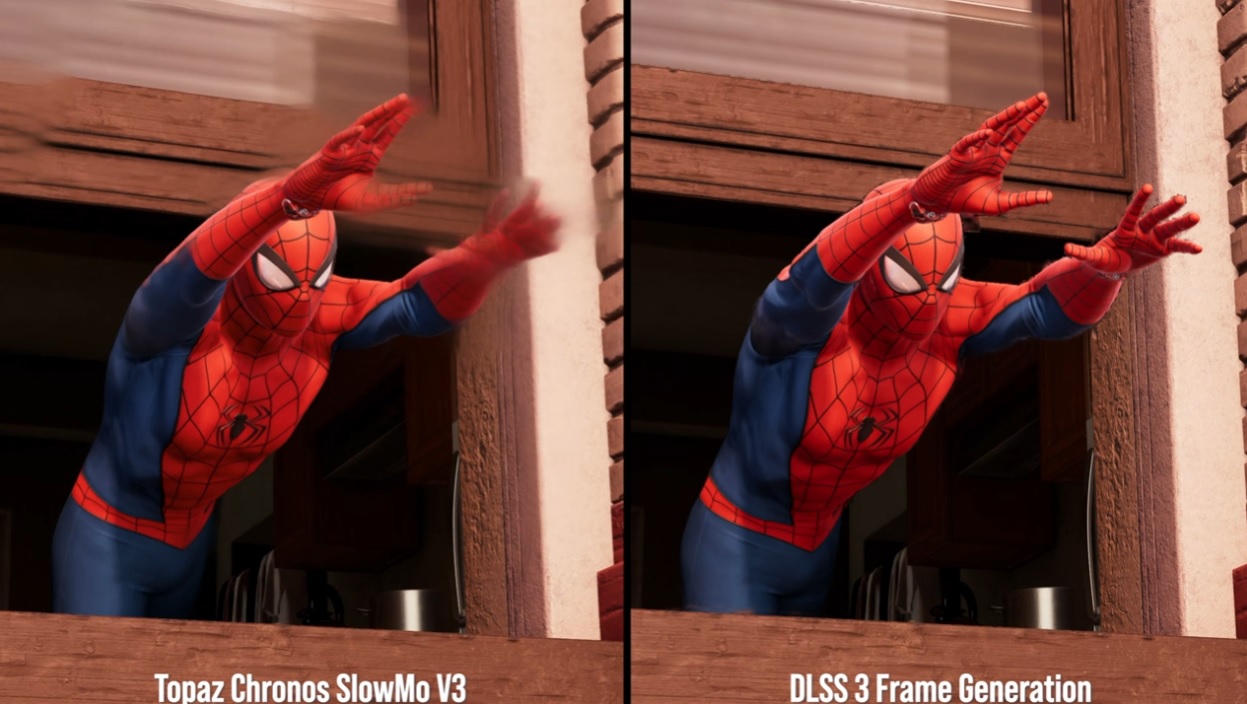 NVIDIA DLSS 3 and frame generation represent uA way to optimize, go beyond raw power and get over walls that squeeze out of the GPU footprint, and from what I’ve seen so far it’s pretty clear that NVIDIA has hit the jackpot with this approach. In the final part of the video we can see an analysis of the latency issue, an important issue that, since this frame generation process increases latency.

We have the technology to solve it. NVIDIA Reflex, which is automatically activated when NVIDIA DLSS 3 is running. Thanks to this technology, the latency in Portal RTX with DLSS 3 activated is only 56 ms, which means that it is practically at the same level as the latency recorded by said title with DLSS 2, and clearly exceeds the 95 ms that we have in native resolution. In Cyberpunk 2077, the latency with DLSS 3 activated is 54 ms, a figure that exceeds the 62 ms of native mode, although it is below the 31 ms of DLSS 2. 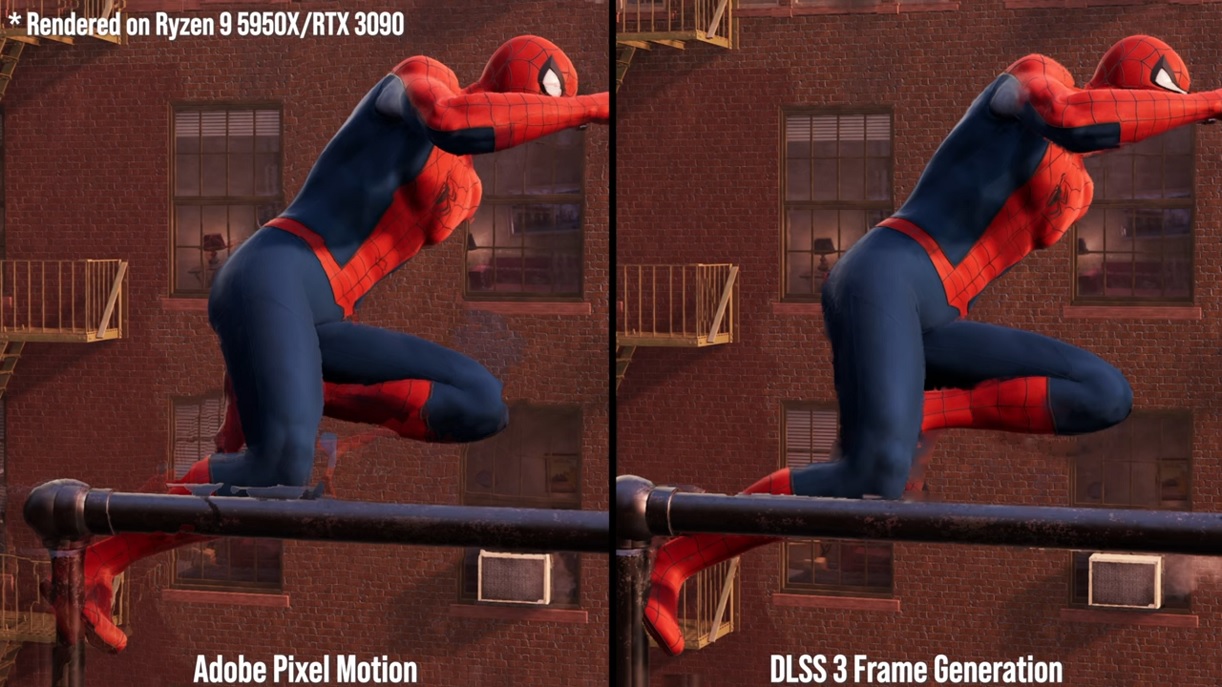 In the final part of the video we have a very important issue, the quality of those generated frames. According to Digital Foundry, NVIDIA DLSS 3 does a good job, and it is confirmed that it is not a simple frame interpolation technology, since it offers superior image quality and results when compared to this type of solution. In the video we can see the problems that Adobe Pixel Motion gives, for example. Does it mean that it is a perfect technology? No, it also has bugs and artifacts, but the end result is very good overall, and it’s clear that NVIDIA will improve DLSS 3 with future updates.

We can also confirm that consistency in rendering frames when activating NVIDIA DLSS 3 is goodso we will have nothing to worry about in this regard, as long as we accompany the GeForce RTX 4090 with a processor powerful enough to “feed” it.

All of Tim Burton’s movies ranked from worst to best

Cheap Game & Watch The Legend of Zelda: where to buy it at the best price?

the Amazfit Bip returns to its minimum