We tested the Xiaomi Poco F4, a version of the F4 GT released last May. Less expensive, but obviously a little less powerful and less well off in the photo, this smartphone has some serious tricks up its sleeve.

Presented a few months ago now, the Poco F4 is positioning itself in the very competitive mid-range sector, facing the Realme 9 Pro+ or the Galaxy A53. In May, we tested the GT version of the Poco F4. Here we leave the universe of video games for something more standard. Offered at less than €400, can this F4 find its place in a market full of controlled offers?

The Poco F4 is currently available in two configurations:

The smartphone is available directly on the Xiaomi site. 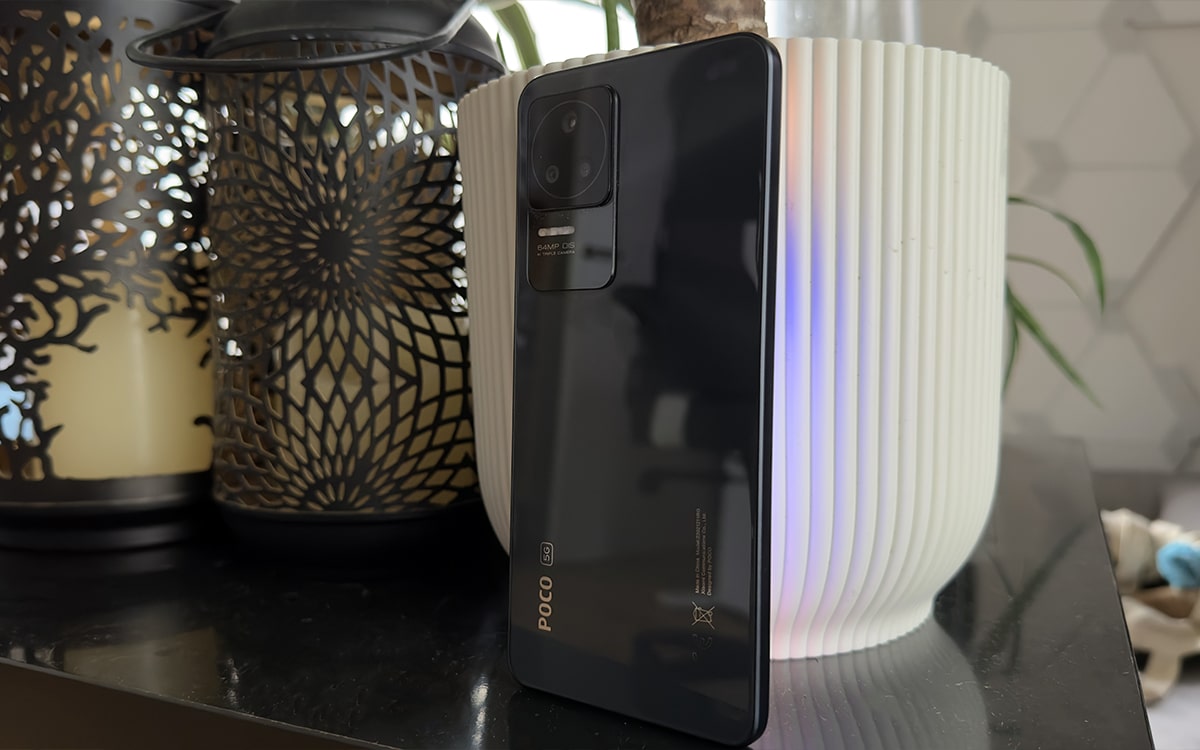 As is customary at Poco, we are entitled here to a fairly complete starter kit accompanying the smartphone. 67W charger, USB-A to USB-C cable, soft plastic protective shell, anti-scratch film for the screen and, failing to provide a pair of headphones, we still benefit from a USB-C to Mini-Jack adapter. Where the majority of manufacturers tend to eliminate the basic accessories supplied, we benefit here from a set of very useful extras to protect and take full advantage of your device upon purchase. 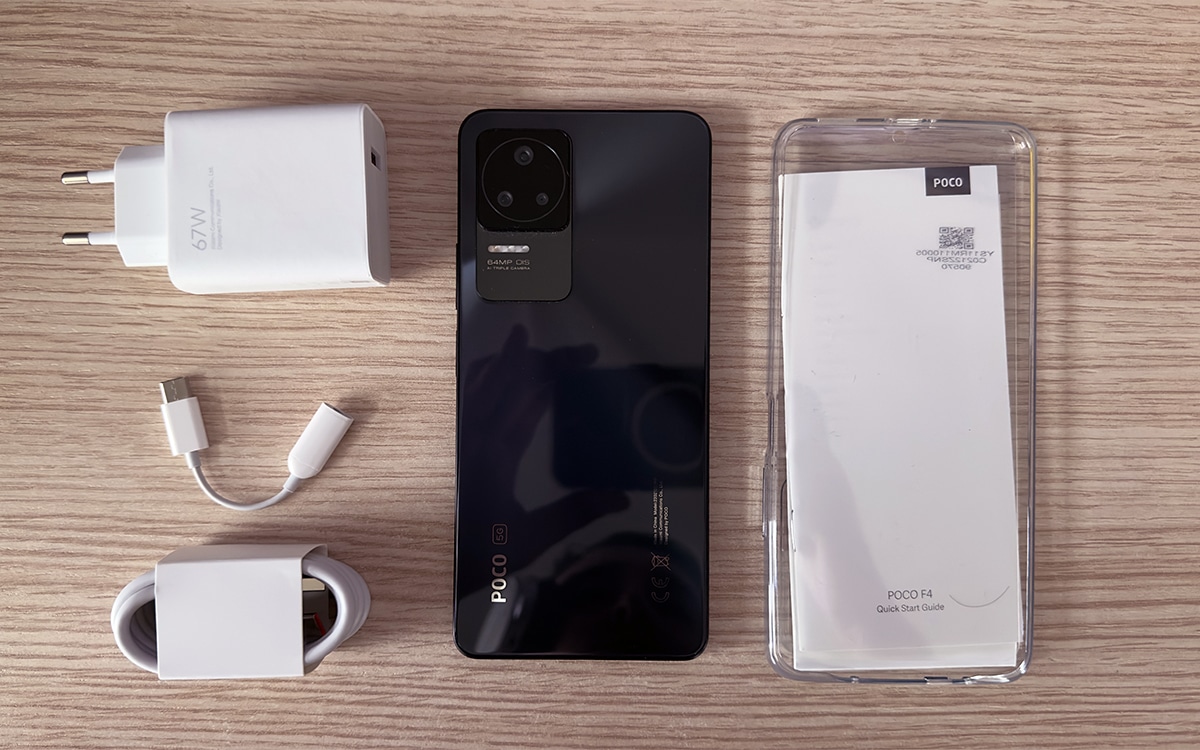 On the design side, the Poco F4 does not revolutionize the world of smartphones. The front panel offers a large 6.67-inch diagonal screen with a slightly thicker chin than the other edges and a small punch at the top housing the selfie camera, overhung at the end of the front panel by a very thin listening speaker. 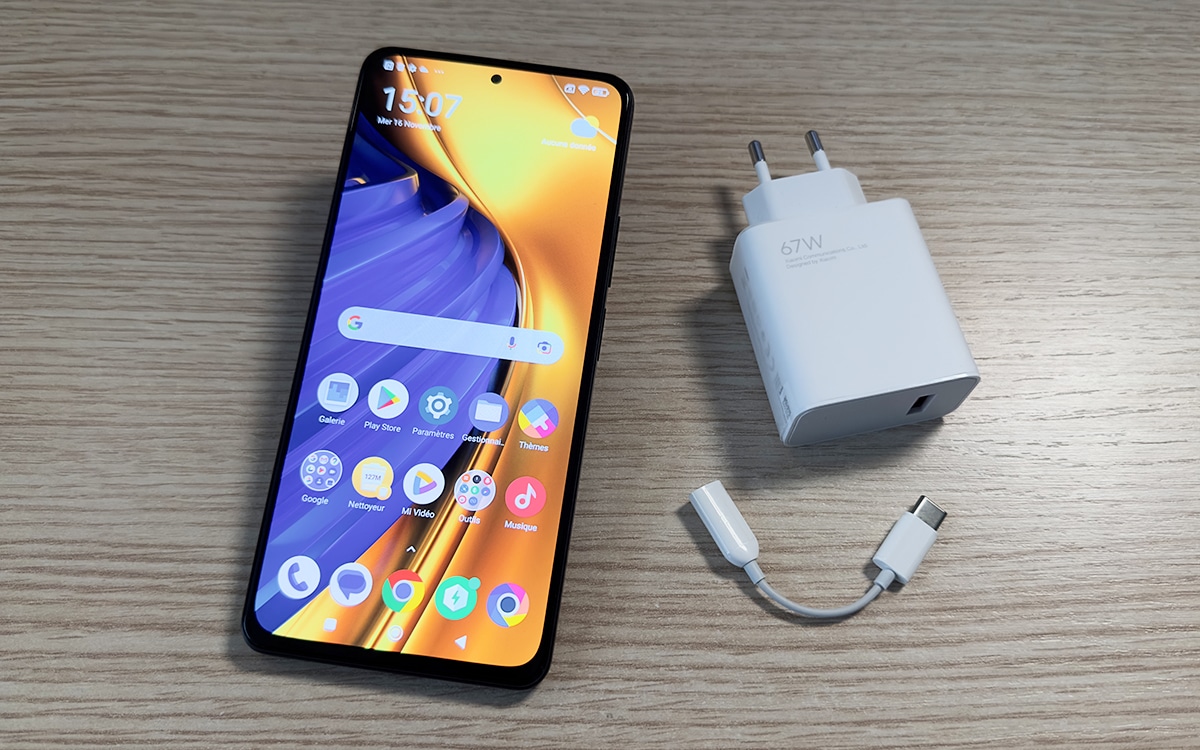 The back of the glass smartphone leaves room for a triple rectangular photo module, which we will develop later. At the same time, we find on the different slices the usual buttons and ports, namely the lock button, under which there is a fingerprint sensor and the volume management buttons on the right. At the bottom, we observe the presence of a speaker, a dual SIM card port and a USB-C port. And at the top of the device are housed an infrared sensor and a microphone for noise reduction during calls. 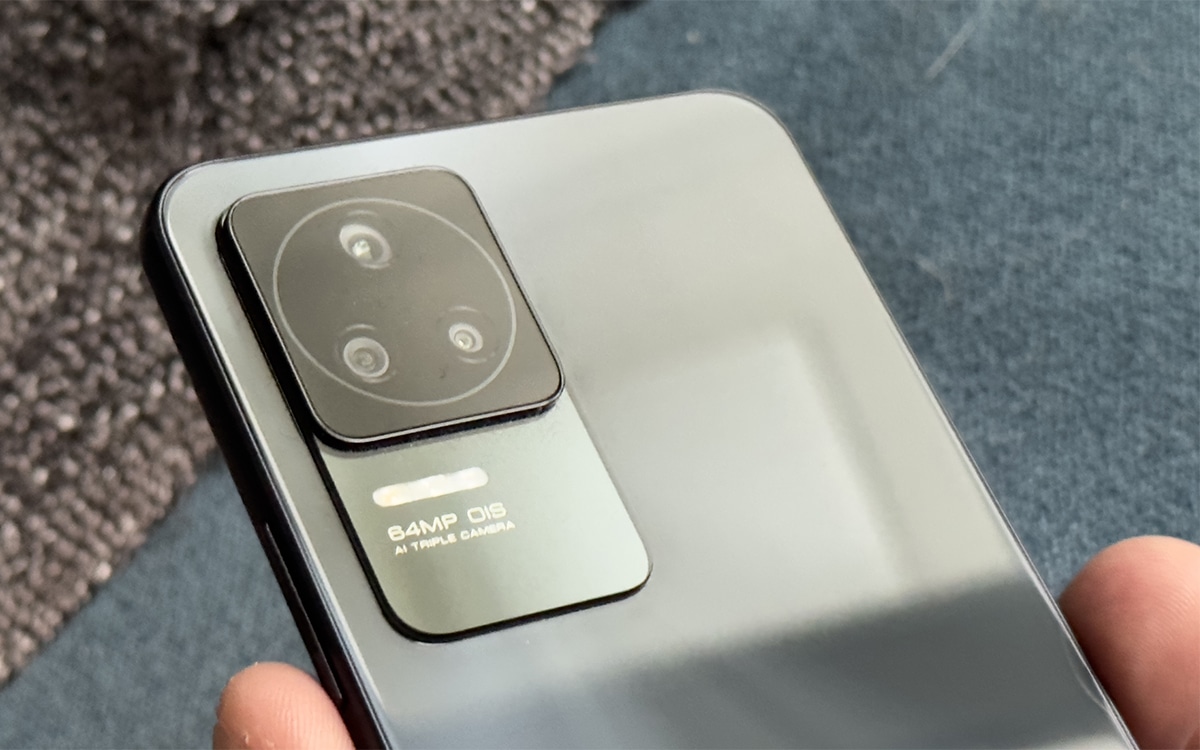 Finally, the device offers a balanced weight/dimension ratio. It measures 16.3 cm in height by 7.6 cm in width and only 0.7 cm in thickness, all for less than 200 grams.

It therefore emerges a pleasant gripwhich does not tire the user during long sessions of calls, web surfing, online chat or video game. 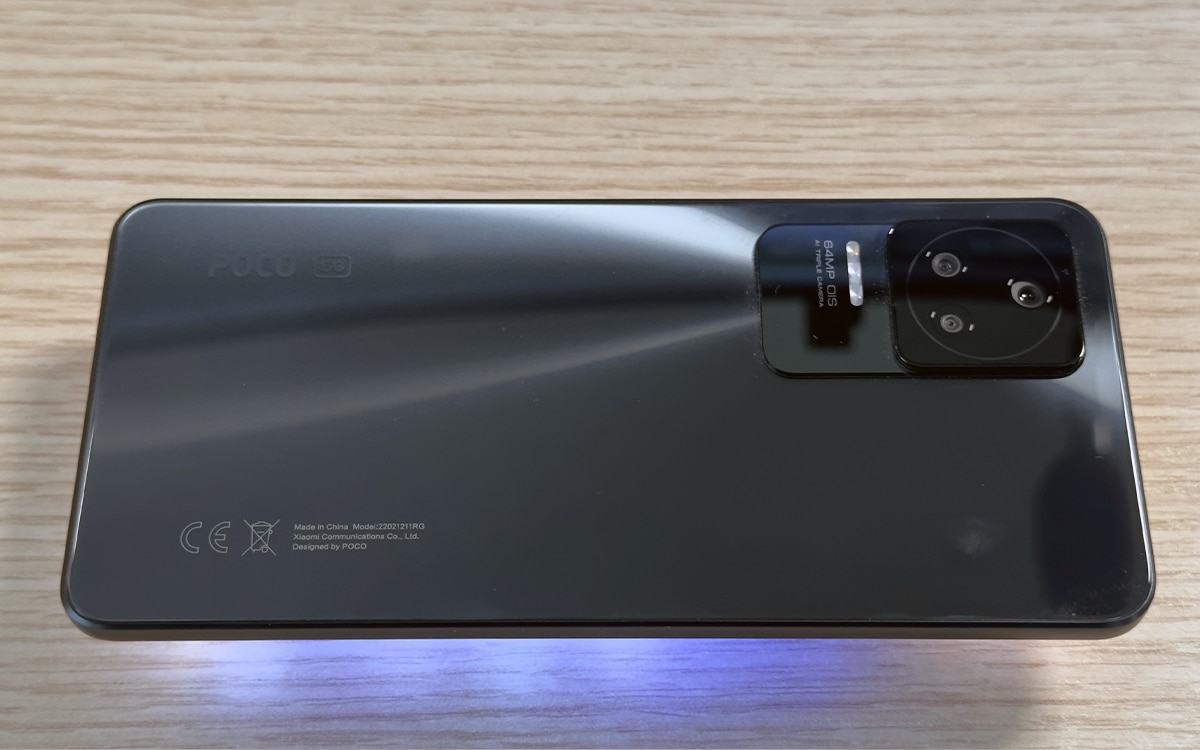 The large viewing area of ​​6.67 inches offers significant features for a mid-range smartphone. Here you can count on a AMOLED panel in 20:9 format offering a 120Hz refresh rate, however not adaptive. The 2400 pixels high and 1080 pixels wide will give you crisp, crisp FullHD+ resolution. The device benefits from pleasant details and a correct brightness of 900nits standard and offering peaks at 1300nits. Quite sufficient, even in direct sunlight, to take full advantage of the panel. 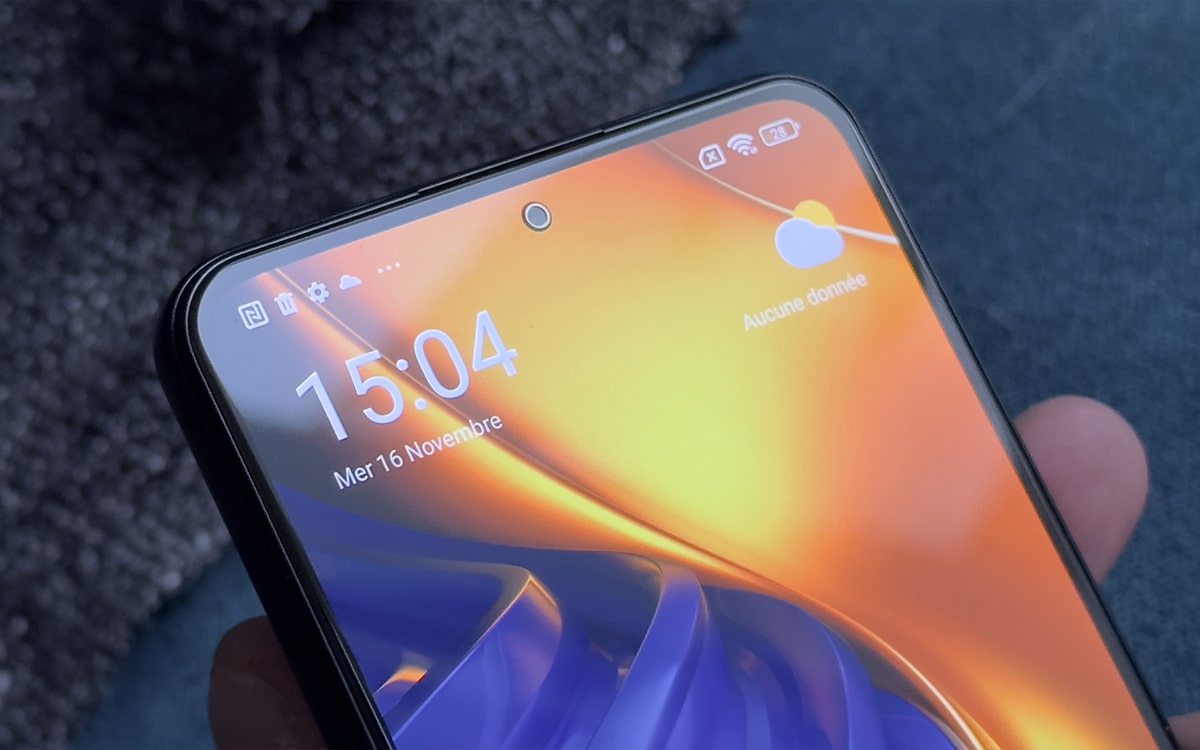 On the color side, 100% of the DCI-P3 spectrum is covered and an almost infinite contrast ratio, thanks of course to AMOLED. The Poco F4 benefits from HDR10+, Dolby Vision and True Color certifications. However, the basic configuration of the screen tends to reinforce saturation. If this configuration, very flattering to the eye, is pleasant, a turn in the settings and a passage in “natural” will offer a much softer calibration and closer to the standards, both in terms of color temperature and in terms of Delta E.

To close on the slab, it benefits from a tactile sampling of 360 Hz, which makes its use and its responsiveness very appreciable. 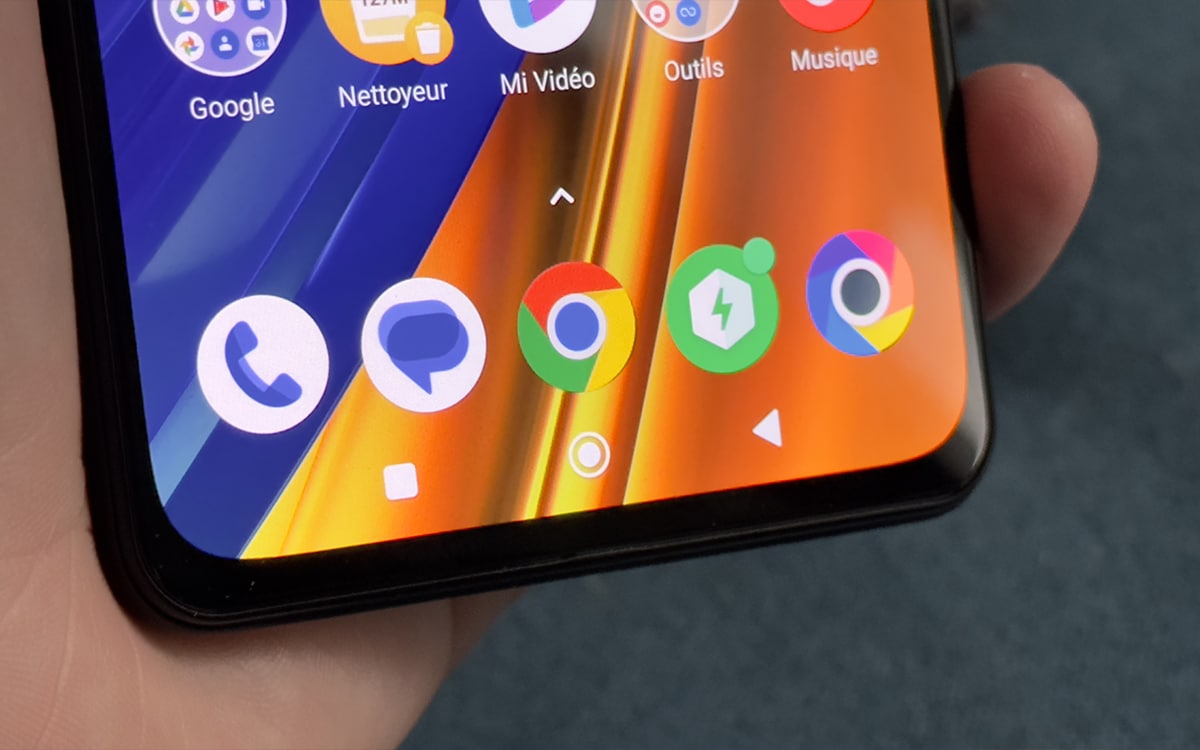 Although equipped with two loudspeakers at the top and bottom of the device, the sound delivered by these suffers froma risky balance and D’a severe lack of low frequencies. The sound sounds “tin can” at full volume and suffers from a fairly audible distortion. The set will however be sufficient to quickly view content in the absence of a more efficient listening solution. On this side, you can take advantage of the choice of USB-C, the USB-C converter to mini-jack or even Bluetooth in version 5.2 integrated into the device. 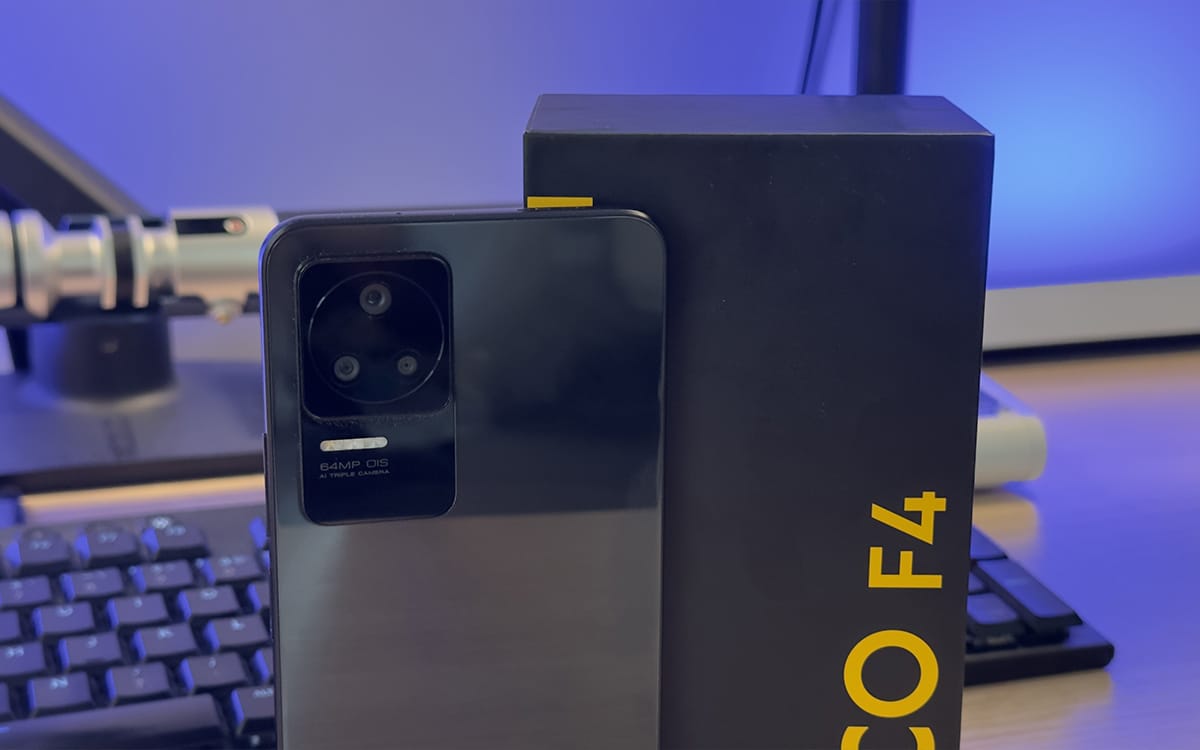 The interior of the Poco F4, on paper, is not very impressive. Two versions are available, one with 6GB of RAM and 128GB of storage, and the other with 8GB of RAM and 256GB of storage. In both cases, the equipment is latest generation with DDR5 Low Profile and UFS3.1. The whole works thanks to a processor from Qualcomm, the Snapdragon 870. As a reminder, this successor to the 865 and 865 plus was announced in early 2021, i.e. more than a year ago. We are therefore entitled to wonder the performance that the latter will be able to offer. 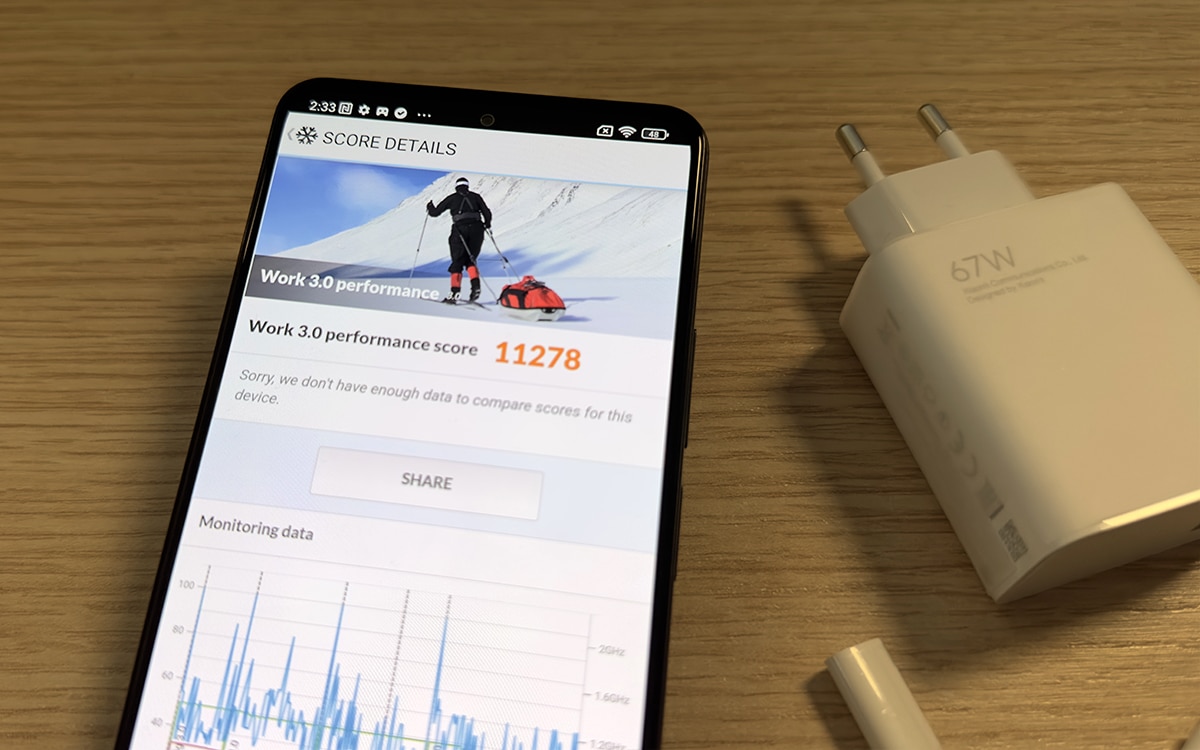 Our test version is the least efficient of the two configurations mentioned. On the other hand, on standard use (excluding the most demanding games), it does – surprisingly – rather well. Interface, navigation and apps load and transition smoothly. Heating remains under control, the stability of the system does not seem to be impacted. In short, for a dated processor, the results are more than good.

The Poco F4 will go further, surprising us even in “gaming” use. In effect, Genshin Impact manages to run smoothly, approaching almost a constant 60 fps with graphics settings set to “normal”. On a mid-range phone, that’s rare enough to be raised. We know that this range usually manages – at best – to offer a stable result with “low” graphics settings. The Adreno 650 is doing really well in this configuration. 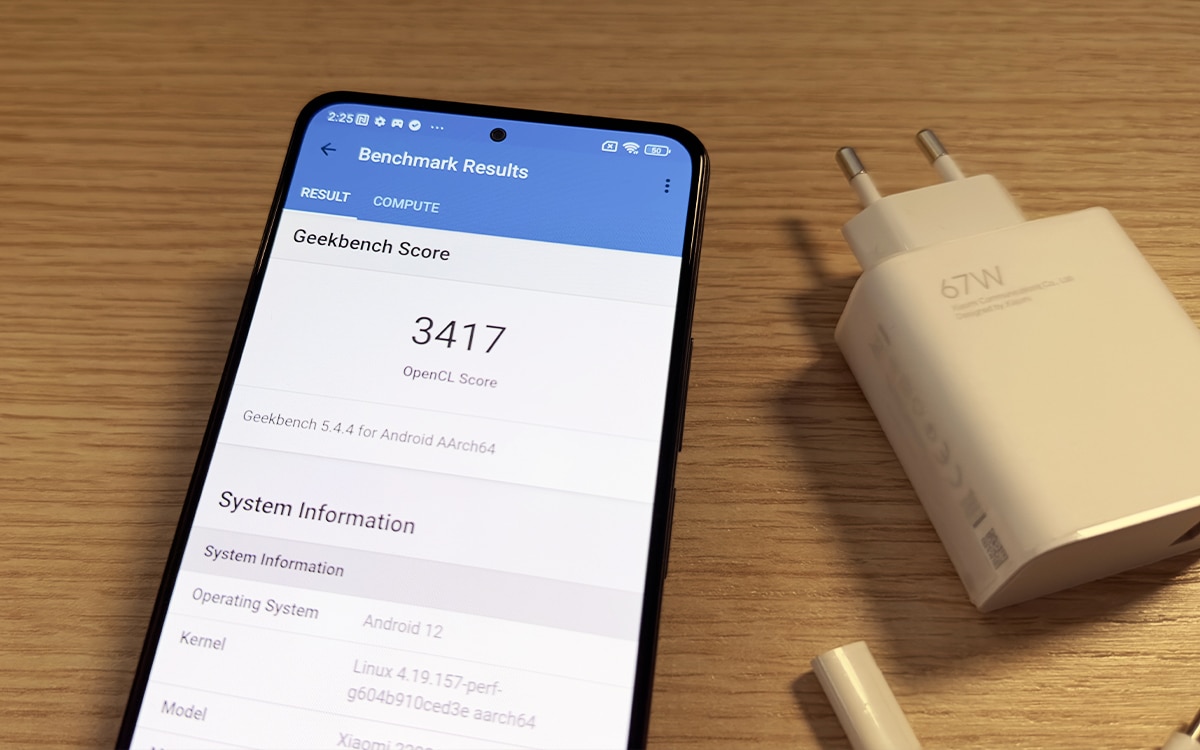 Although not designed for gaming, the Poco F4 therefore seems to inherit its GT version, which displays a certain mastery in this field. However, there is a greater heating on this type of use. Although far from being excessive, the latter is felt and remains present (which can however be a good point to keep you warm this winter, the gossips will say).

On the connectivity and network side, an X55 modem will take care of ensuring the 5G connection. Here, still no millimeter 5G compatibility, but the French network is not yet ready.

We will also find the Bluetooth 5.2 as mentioned above, but also Wi-Fi 6. You should therefore have no problem benefiting from the best in both cases.

By offering a 4500 mAh battery, the Poco F4 meets current standards. If it does not have induction charging, it still has the advantage of offering in the box a transformer allowing fast charging of 67 W. In fact, it will take around forty minutes to fully charge the smartphone. This is still quite correct. 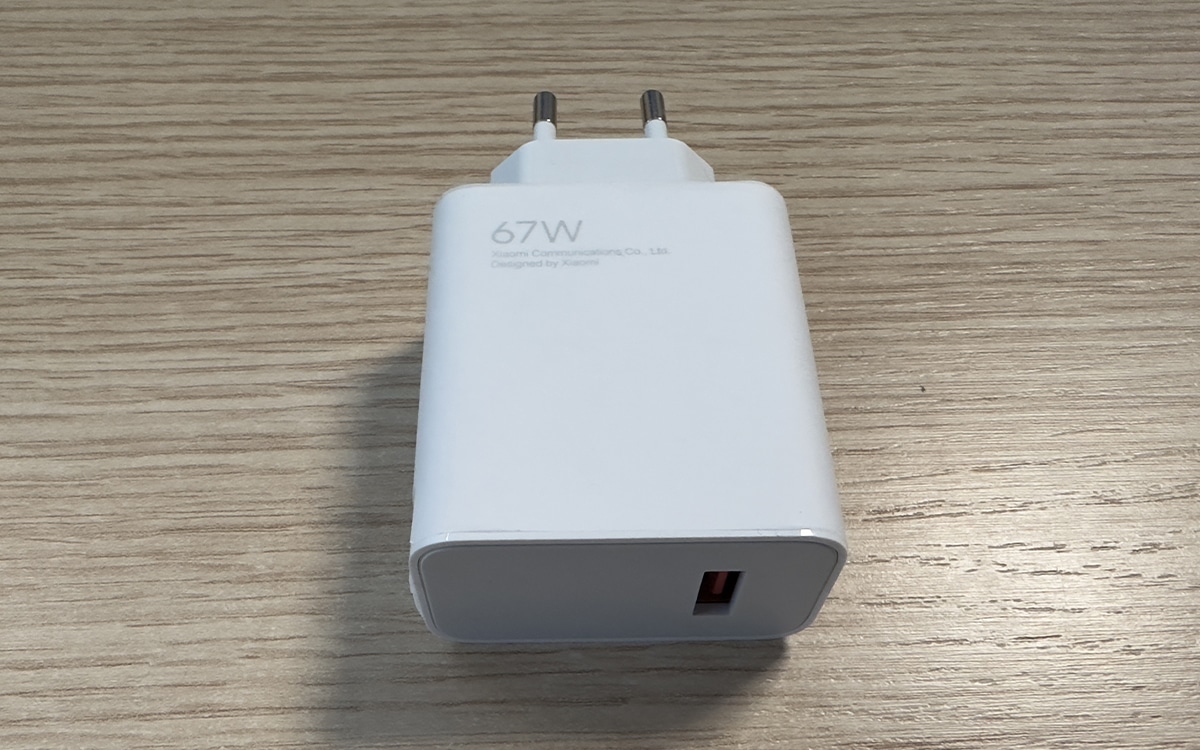 In terms of autonomy, this smartphone remains good as well. You won’t have to worry about two days with mixed use including calls, social media, VOD, music and some gaming.

On this section, the Poco F4 is doing really well. While it doesn’t offer the fastest recharge or the longest battery life, it still remains at the top of the basket, which will make it a reliable companion for your long days.

The Poco F4 offers the most standard of this type of smartphone. A triple photo module on the back consisting of a 64 Mpx main camera opening at f / 1.79 optically stabilized, an 8 Mpx ultra wide-angle offering a 119 degree field of view and an f / 2 aperture, 2, and finally, the eternal 2 Mpx macro sensor opening at F / 2.4 which only has to be present.

We say it regularly and we repeat it, once the first tests are over, you get tired very quickly of the macro sensors which generally offer a quality well below the rest of the device, and which only serve to inflate the specs of the telephone.

To begin, let’s look at the main sensor. During the day, the latter offers pretty shots. The details are there, the image is sharp and precise, and the colors are faithful to reality without being too garish or too saturated. We also notice good dynamic range management with detail in both highlights and shadows. In the radius of regrets, it should all the same be noted a very present distortion at the edges of the image.

The ultra-wide-angle in equivalent light conditions offers a balanced result compared to the main sensor. Color, light and HDR handling are equally good. However, the further away from the center of the image, the greater the loss of detail, distortion, and chromatic aberrations.

You will also be able to enjoy a 2x zoomwhich is entirely digital and comes to reframe in the main sensor, something that you can therefore do yourself in post production.

In low light conditions, however, the result is quite different. If the main camera still manages in the majority of cases to satisfy with balanced shots and whose noise, in the darkest areas remains controlled, it is a completely different story on the ultra wide-angle from which shots emerge at hardly usable. The software processing has an annoying tendency to try to correct the appearance of grain as well as possible, the pause time offers shots which, even if the general whole of the scene is readable, blurs every detail, and returns the image to the unusable end.

The macro sensor is faithful to its namesake among the competition. The shots are correct without more, and will not revolutionize the genre. The focus area is short enough to isolate your subject well, which still allows you to take some pretty pictures.

Let’s finish with the 20 Mpx selfie sensor which offers nice shots, like what is expected of a sensor

frontal. The sharpness is present, the image has detail, and the basic software processing does not affect the photo too much, offering a natural result.

On the video side, the Poco F4 is capable of filming up to 4K 60Fps and offers successful footage. We are far from a flagship like the S22 or the iPhone 14 but you will have no trouble getting videos that are pleasing to the eye. The optical stabilization also does its job well to compensate for small involuntary movements.

Xbox Series X: the console is back in stock at Cdiscount, quickly!

Bitcoin: big polluters are banned from staying in New York for 2 years

Galaxy S22: Samsung halves its price after limiting its performance