In the market we can find all kinds of software of this type, so we are going to tell you which ones are the best that we can use with our Linux operating system.

Next, we are going to show you various administrators and password managers with which we will be able to keep our credentials safe on a Linux computer.

Bitwarden, the most popular option

We are surely facing one of the most popular and well-known password managers. It is a software of Open Source, multiplatform and multi-device so we can use it on computers with Linux, macOS and Windows, as well as on mobiles with Android and iOS. It also has extensions for the main browsers. It stands out for having an intuitive and easy-to-use interface. It also provides us with high encryption compatible with 256-bit AES.

We can classify the credentials entered by categories such as, for example, login, identities, notes, cards, among others. Likewise, we also have the possibility of creating our own folders to be able to organize ourselves to our liking. In addition, it has a password generator to help us establish more secure and difficult credentials.

Bitwarden has a free version that we can download from this link to the developers’ website. It also has a premium version that is priced at $ 3 a month for home users, which includes 1 GB of encrypted space or two-factor authentication, among other advantages.

It is an open source, cross-platform and multi-device password manager. This makes it compatible with Linux, Windows, and macOS on computers, as well as Android and iOS on mobile devices. It also has extensions for both Chrome and Firefox. Within the security section, Buttercup guarantees us advanced encryption 256-bit AES with SHA256 HMAC. It is one of the algorithms of more reliable data encryption and widely used. This program stands out for having total control over stored passwords, allowing us to store them wherever we want, since it has the ability to save credentials locally, use third-party cloud services such as Dropbox or Google Drive. Additionally, we can import your credential database in various formats and it supports two-factor authentication.

LastPass, one of the safest managers

Another well-known password manager is LastPass. As we can imagine, we are facing a multiplatform application with support for desktop operating systems such as Linux, Windows and macOS and mobile devices. Yes, we can only use our account on a platform (at least in its free version), so if we use it on our Linux computer, we won’t be able to use it on our mobile as well. 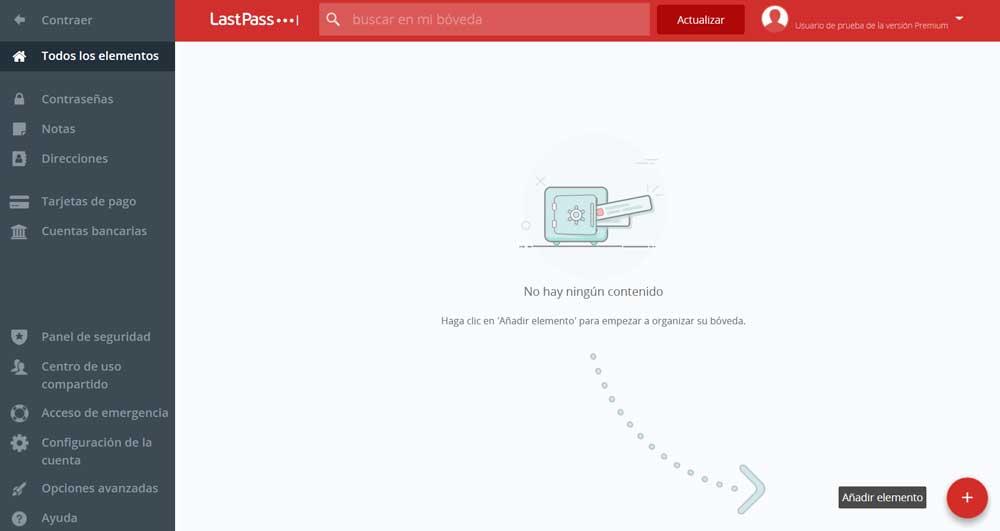 It stands out for offering compatibility with security systems as powerful as encryption AES-256 bits, as well as having an extension compatible with most web browsers. Although it does not have many customization options, it does have multi-factor authentication and an additional layer of security. In addition, it has other functions such as a password generator.

LastPass has a free version that we can download from the developer’s own website. It also has different payment versions that we can purchase from 2.90 euros per month.

This password manager also has a high popularity rating despite not being an open source application. Like other software, it is multiplatform so we can use it on Linux, macOS or Windows, as well as with mobile devices. Of course we must bear in mind that only works with 64 bit system. It has a virtual vault where we can safely store our credentials thanks to its encryption 256-bit AES and 24,000 iterations. These are saved locally offline. In addition, we will be able to save all kinds of additional secure information, such as credit cards, documents, etc. In addition, it has an additional function called Keyfile that allows it to be used as second factor of authentication when logging in.

If we want to use Enpass we can download the tool for free from its official website.

Myki, protect your data without using a third-party server

It may not be as popular and well known as the previous softwares, but Myki is also a password manager to consider. How could it be otherwise, it is a multiplatform program that we can use on our Linux computer and even our mobile device. Its main characteristic is that it does not save data on third-party servers, since it works locally and each credential that we save will be stored in its own encrypted file that is saved on the device itself. Along with the possibility of storing credentials, Myki allows us to create entries for bank cards, 2FA keys, secure notes or a protected calendar. In addition, it allows you to use autocomplete and add a two-factor authentication token.

Download Myki for free from its website. Or if we are professional users we can subscribe to its premium version to create workgroups starting at $ 3.99 per month.

Keeper, powerful and safe, although paid

We are talking about another important password manager despite not being open source. It is compatible with our Linux computer, as well as other operating systems, mobile phones and the most popular browsers. The application has a powerful encryption method such as AES 256 bits, which serves to protect all our login credentials, as well as confidential files. It also has other additional security measures that can be very useful, such as the two-factor authentication, a strong password generator, and the ability to destroy your database in the event that we incorrectly try to log in for five attempts. In addition, it allows granting access with a read-only password in case of emergency.

Keeper is not a free tool, but we can test it by downloading its trial version for 30 days. Its price for personal use is 3.52 euros per month with annual billing.

Which one to use on Linux?

As we can see, we have a good amount of software that will help us to manage and administer our passwords on a Linux computer. Most of these applications are open source and free, so we can freely test them to see which one best suits our uses and needs. All have high-end encryption to ensure that our credentials are very secure. It is also possible to use them on other devices and even on our mobile phone.

If we want our credentials to be saved locally on our computer, applications such as Buttercup or Enpass are the main options to consider. If we do not care that the credentials are stored in the cloud, so that they can be shared between different devices, LastPass It is another option that we should not lose sight of.

Save CPU and RAM by closing unnecessary CCleaner processes

ASML to the rescue of Intel, TSMC and Samsung in the chip crisis