This new QNAP TS-364 NAS server is aimed at a home or small and medium office use where we want to have a large storage capacity and outstanding performance in reading and writing tasks, it is not a NAS server aimed at systems virtualization operating, although if we expand the RAM memory perhaps you could virtualize a Linux-based operating system that requires less resources than a Windows system. This model is ideal for lightweight virtualization with Docker and also for general storage.

This new NAS server incorporates a powerful Intel Celeron N5095 processor what is a Quad-Core at 2.0GHz speed, although it can increase its speed up to 2.9GHz in case of need. This model has a 64-bit x86 architecture, we have an integrated Intel UHG Graphics GPU at a speed of 800MHz, we also have acceleration of hardware encryption with AES-NI both in the volumes and also in the folders, of course, we will notice that the performance when transferring data via FTPES and SFTP is perfect. Other important features are that it supports hardware accelerated transcoding, ideal for making the most of programs such as Plex Media Server and others, without using the processor itself. Regarding the RAM memory of this NAS server, it includes a 4GB DDR4 RAM capacity although we believe that it can be expanded up to 8GB or 16GB of DDR4 RAM because the processor allows it.

Regarding the storage of this new NAS server, we have a total of 3 bays to accommodate 3.5 ”hard drives Inside, this is ideal because we can configure a RAID 0, a RAID 1 but also a RAID 5, and enjoy the best performance and the best reliability because a disk can be broken and the information will continue to be inside the storage.

This model also incorporates 2 M.2 NVMe slots for SSD drivesThanks to the new QTS 5.0 operating system and Linux kernel 5.10, we will have a maximum optimization in the use of NVMe drives for the SSD cache, in addition, it will also manage the over-provisioning of the SSD drives much better. These SSDs can be used as a storage pool for all SSDs, as an SSD cache, or as tiered storage with Qtier. Regardless of the use that you are going to give it, it is a point very in favor of these domestic NAS that already incorporate this very important functionality to accelerate the overall read and write performance.

Regarding the connectivity of this model, we have a single 2.5G Multigigabit portThis will allow us to transfer data at a reading and writing speed of up to 290MB / s, of course, the operating system will allow us to configure the Jumbo Frames at 9K in order to optimize the local network as much as possible and make it as efficient as possible. possible. 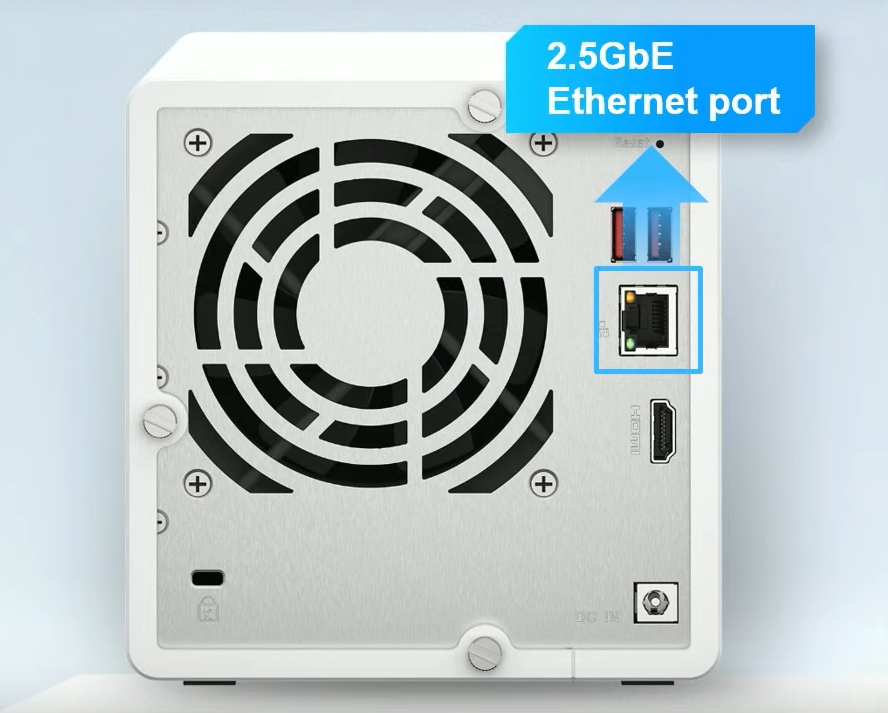 Regarding the USB ports, we have one USB 3.0 Type-A 5Gbps port on the front next to the backup button, we also have two 10Gbps USB 3.2 Gen 2 ports on the rear of the NASThese USB ports will allow us to make backup copies, connect printers to put them on the network, connect a UPS to monitor it and many more possibilities thanks to the QNAP operating system.

This model, by incorporating a GPU in the processor, we have one HDMI 1.4b output to use it as a media player directly on the TV. Thanks to this HDMI port we can have HybridDesk Station to use it as a multimedia player, we can connect a mouse and keyboard via USB to control it, although we can also do it through the Qremote app for smartphones. In the HybridDesk menu we will have direct access to QTS, FileStation, programs such as Skype or Facebook, Spotify, QNAP’s photo, video and music applications, as well as web browsers and LibreOffice. Lastly, we also have Linux Station to use an Ubuntu 18.04 or 20.04.

Other features and operating system

This model is aimed at a domestic or small office environment, therefore, it is essential that it has low consumption, in this case we have a consumption of about 26W in standby and about 33W in full operation, therefore, it consumes really little. This equipment has a very efficient and silent cooling system, we can keep the internal components quite cold while the noise level is around 21dB approximately.

The embedded operating system on this NAS server is QTS 5.0 and incorporates all the new functionalities. We have the possibility of configuring snapshots to protect our data from possible deletions or ransomware, we also have improvements in the performance of NVMe SSDs, TLS 1.3 security via the web and also via FTPES, we have the possibility of adding SSH keys in the login of users, automatic updates, and also automatic update of applications among many other functionalities.

As you have seen, this new NAS server model has very interesting hardware, adjusted to what home users are looking for today. We must also take into account the new QTS 5.0 operating system with a large number of improvements in security and functionality.

Learn to see all saved Wi-Fi networks in Windows

10 recommendations to optimize your WiFi router