We are facing a mouse designed to play both MOBA and MMO thanks to the fact that it has 12 buttons on the side To which we can assign different commands is the games, speeding up the access to certain actions in the games, and that are added up to the other 5, so the 17 in total are programmable. Of course, we can only store up to 5 different profiles in memory, which at first may seem few, however, they are many more than in most mice on the market.

The Scimitar RGB Elite uses a sensor PixArt PWM3391 with a resolution of up to 18,000 DPI and switches OMRON. So in that regard, it is not poor in performance. Of course, if you want to get the most out of it, you will have to install the CORSAIR iCUE drivers from where we can also control the RGB lighting of the mouse, the sensor’s DPI, as well as program its large number of buttons and calibrate it.

The last thing we have left is the connectivity, which is wired via USB, which is key for the CORSAIR mouse to be cheaper than the Razer one. So unless you are one of the people who plays away from the mouse screen.

If, on the other hand, cables are a nuisance and we want a mouse without them, then the Razer Naga Pro is our best ally, it is a mouse with specifications very similar to the CORSAIR Scimitar RGB Elite, since at the beginning we have the same panel 12 buttons on the side, which are added to the other 7 for a total of 19 programmable buttons. The Razer mouse like the CORSAIR mouse allows us to store up to 5 different macros in its memory.

The main differential characteristic between the CORSAIR and Razer mice is that in the latter we can change the side panel of the mouse for several different ones, so that apart from the 12-button panel we can choose another with 6 buttons or with the simplest one with only 2 buttons. They all come standard and are easy to fit.

In any case, taking into account that we are dealing with a wireless mouse, one of the key questions is: how long does the battery last? Well, it depends on the connection we use, since under Bluetooth despite having more latency it will last us 150 hours, but using its radio frequency connectivity although with lower latency over 100 hours. Mind you, these figures are without active RGB lighting, which is configurable through Razer Chroma.

And how is its performance? Razer’s proprietary optical sensor lets you reach up to 20,000 DPI resolution in combination with its switches with a response time of 0.2 milliseconds, so their performance in First Person Shooter games where reaction speed is important. So it is a much better option for those types of games.

Razer or CORSAIR, who has the better mouse? 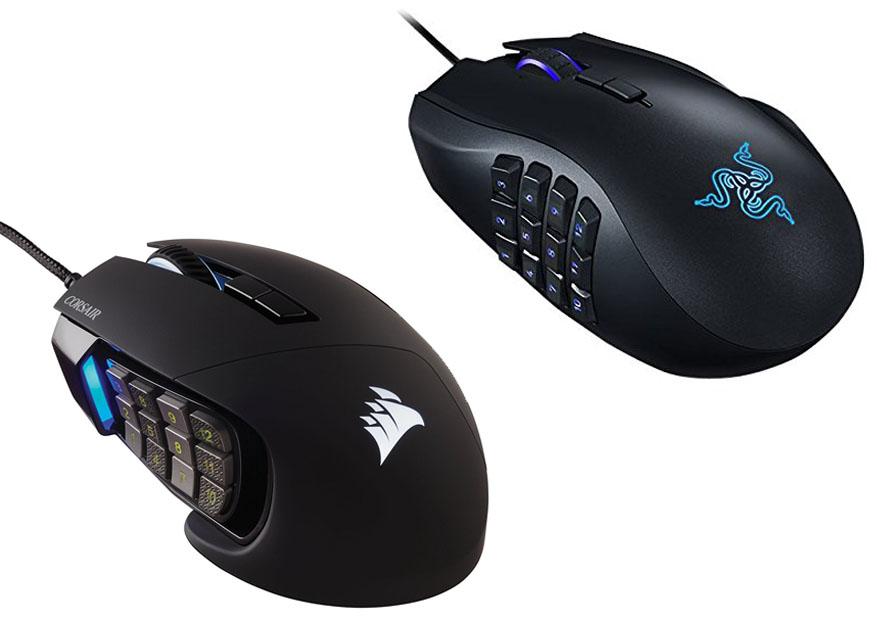 If you go for specifications and your pocket does not itch then our recommendation is that you go for the Razer model without thinking, however our preference is for the CORSAIR one, since in exchange for losing wireless connectivity we gain in the fact that the price it almost cuts us in half.

In terms of performance, the Razer mouse is somewhat better, especially since its sensor and optical switches are more accurate, but that difference is more noticeable in the first person shooter genre, since it does we are playing a MOBA or an MMO we will not notice the difference, due to the typical Cooldown time of the actions of the characters. So depending on the type of games we play the Naga Pro does not result in an advantage over the CORSAIR model.

Another weak point that we see in the Razer mouse compared to the CORSAIR mouse is that despite being wireless, it does not have fast charging via USB-C and it is necessary to buy a separate dock that can make the price of the device go up to 200 euros. In any case, we can use the micro-USB cable that comes standard to use it while it is charging, however, the grace of being able to charge the mouse while we are not using the PC is lost and the charge is much slower.

Our verdict? Unless you’re a Razer fan, we don’t think it’s worth the price difference when the CORSAIR mouse offers almost the same performance for half the price – what’s more, you can make use of the price difference to buy a good mechanical keyboard and have the best possible combination or another component or peripheral for your computer.

Complement your free Avast antivirus with these programs

Should I install the optional Windows 11 update, or wait