Just as we have been waiting for weeks, and we anticipated you a few days ago, the Redmi Note 11 family is now official, and in general it confirms a lot of what we expected from it. Xiaomi has been able to give excellent continuity to a product line that has won the favor of many users, to whom this format, which was called a phablet at the time, provides them with exactly the type of device they need.

As you can see in the table above, we can group these four new models into two groups: the one formed by the 11 and 11S, and the second with the two models named Pro. In both, as you will see, the differences are not too pronounced, although they are enough to justify the launch of different versions.

So, let’s start talking about the Redmi Note 11 and 11S. Its main difference is in the interior, and that is that while the 11 is built around a Snapdragon 680 SoC with the Adreno 610 GPU, inside the 11S model what we will find is a MediaTek Helio G96 with a Mali-G57 MC2 GPU. In both cases we will see models with 64 and with 128 gigabytes of storage, while the 11 can equip four or six gigs of RAM, while the 11S will be available with those settings, but also with eight gigabytes.

Regarding its screen, both models mount a panel 6.43-inch AMOLED with FullHD + resolution (2,040 x 1,080 points) and a refresh rate of 90 hertz. In addition, to guarantee its safety, Xiaomi has chosen to protect it with Gorilla Glass 3. A screen through which its front camera, 13 megapixels on the 11 and 16 on the 11S, appears in a perforation located in the upper central part. .

We also find differences in the main sensor of the rear camera. In the Note 11 we find a sensor of 50 megapixels, which jumps to 108 MP in its older brother. In both cases, the camera is completed with an 8-megapixel wide-angle lens, a two-megapixel macro lens and a specific sensor for depth of field, also two megapixels.

In both Redmi Note 11 the connectivity options are the same: 4G, WiFi AC, Bluetooth 5.0, NFC, GPS and infrared, and the assembly is fed, also in all the variants of the two models, from a 5,000 milliamp battery, compatible with fast charging of 33 watts, which is what is provided by the charger included with the device.

As for the Redmi Note 11 Pro and Pro 5G, the first change with respect to the two previous models is seen on its screen, which grows to the 6.67 inch AMOLED panel but it coincides, yes, in the resolution, because in both models it is of 2400 x 1080 dots. Its update rate is 120 hertz and is protected behind a resistant glass Gorilla Glass 5. In both models, the front camera that appears through a hole in the upper central part is 16 megapixels. 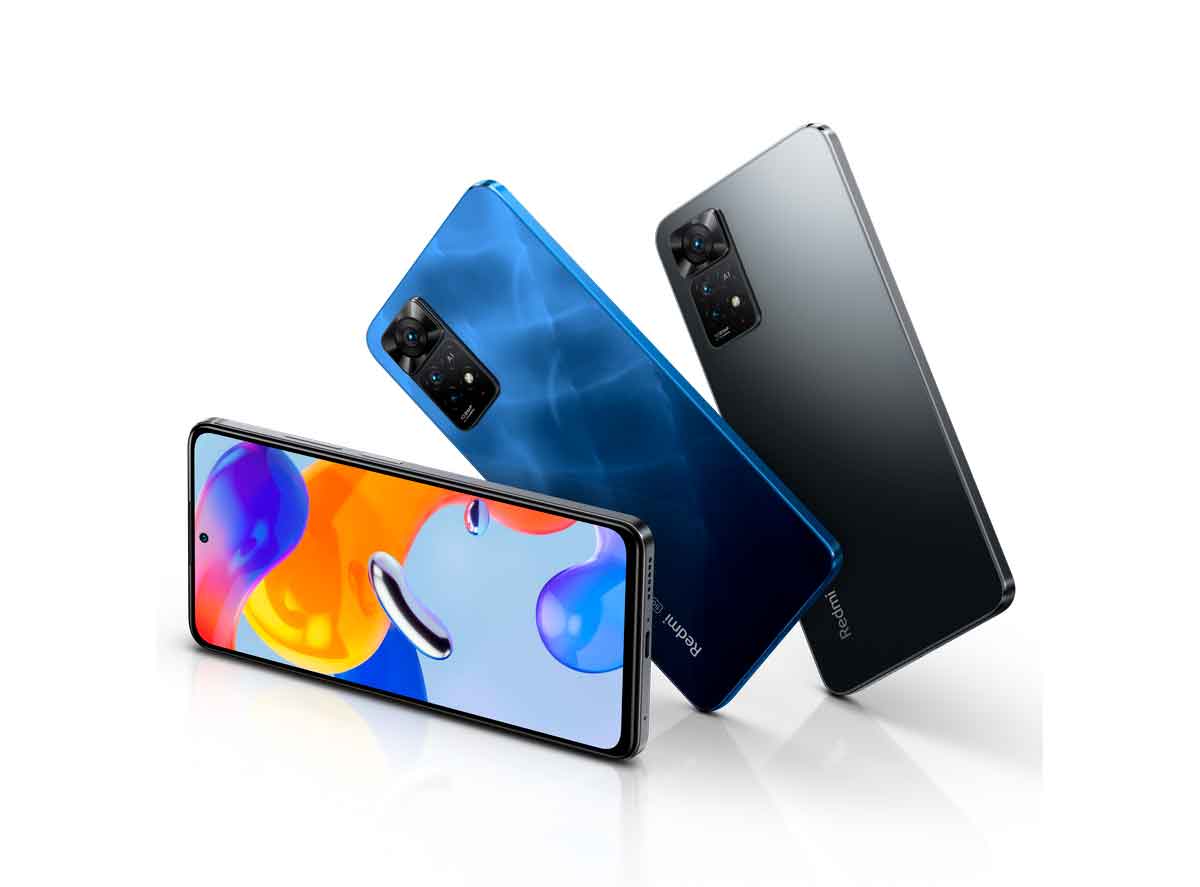 There are also differences regarding the main camera, although in this case not in the resolution of its main sensor, which in both cases is 108 megapixels with F/1.9 number. In both models we also find an 8-megapixel wide angle with f/2.2 number and a 2-megapixel macro lens. The difference is that in the 5G model we also find a sensor dedicated to 2 megapixel depth of field.

In terms of connectivity, you will have already deduced the main difference between the two, and that is that, as its name indicates, the Redmi Note 11 Pro 5G offers 5G connectivity, compared to the 11 Pro which, in its cellular connectivity, stays at 4G. For the rest, both share WiFi AC, Bluetooth 5.0, NFC, GPS and infrared. To feed them, these two models also equip a 5,000 milliamp battery, but in this case its fast charging function scales up to 67 watts, which is what is provided by the charger included with the smartphone.

The Redmi Note 11 and 11S will soon hit the market in blue, holographic and black colors, their prices have not yet been released. For their part, the Redmi Not 11 Pro and Pro 5G will also hit the market soon, in February, and their prices will start at $329 for the 5G model, and $299 for the 4G version. All of them will be available, from their launch, in the official Xiaomi store on Aliexpress.

The strange special collaboration between Louis Vuitton and LEGO

If you are using Windows 10 2004, prepare the update as soon as possible