Review Klipsch Reference Premiere: a set of authentic cinema. And so cinematic, since this set signed by the Klipsch brand It has left us with our mouths open for its great sound quality (for which, he is also very much to blame, the fabulous Arcam AVR10 responsible for moving them) for its high sensitivity, very good dispersion and unmistakable aesthetics. Can you come with us?

The Klipsch Reference Premiere RP-6000 would be in the middle of the range of Klipsch Reference speakers. uses two 6.5-inch woofers combined with a 1-inch tweeter and rear bass reflex. Its nominal impedance is 8 Ω.

The tweeter (with its famous horn design), made of titanium uses hybrid technology tractor from Klipsch, which basically means it’s mounted inside a set of square shock absorbers recessed into the front of the wooden frame. This approach is designed to correct for the air pressure difference between the tweeter and the air in front of it, resulting in better sensitivity and better dispersion.. The tweeter itself uses a vented ceramic magnet housing, combined with a rigid titanium diaphragm. 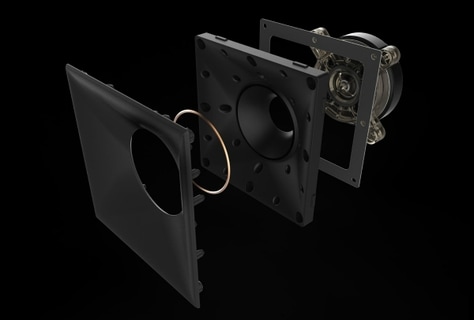 The combination of LTS titanium horn tweeter coupled with 6.5″ woofers (made in the material Cerametallic) give the RP-6000F a frequency range of 34 – 25kHz with 8 ohms nominal impedance, an impressive sensitivity of 97dB (2.83V@1m) while the crossover has been set to 1800Hz (pretty low). 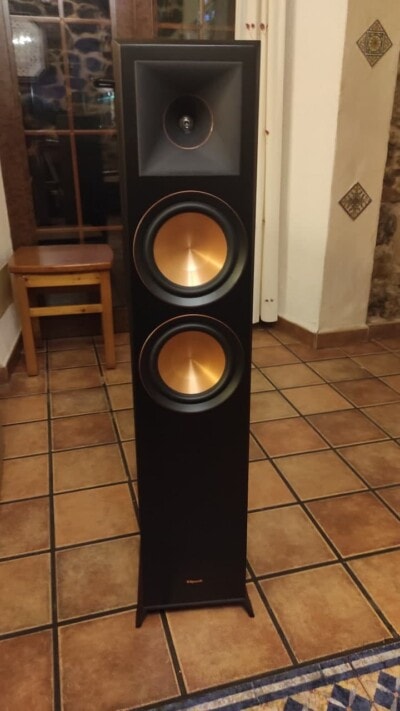 Speaker sensitivity basically relates to the amount of power needed to amplify the speaker. The more sensitive (or efficient) the speaker is, the less power is required – and the less it will consume. The above measurements refer to the sound output of one watt of power measured at a distance of one meter. An efficient speaker not only requires less power, but also generates less heat and generally has a longer lifespan.

The reason Klipsch originally started using these tweeters was because 70 years ago amplifiers were very underpowered and therefore sensitivity was extremely important. These days it is no longer a problem, but Klipsch has spent most of the last few years fine-tuning its technology and, as a result, its speakers are incredibly responsive. 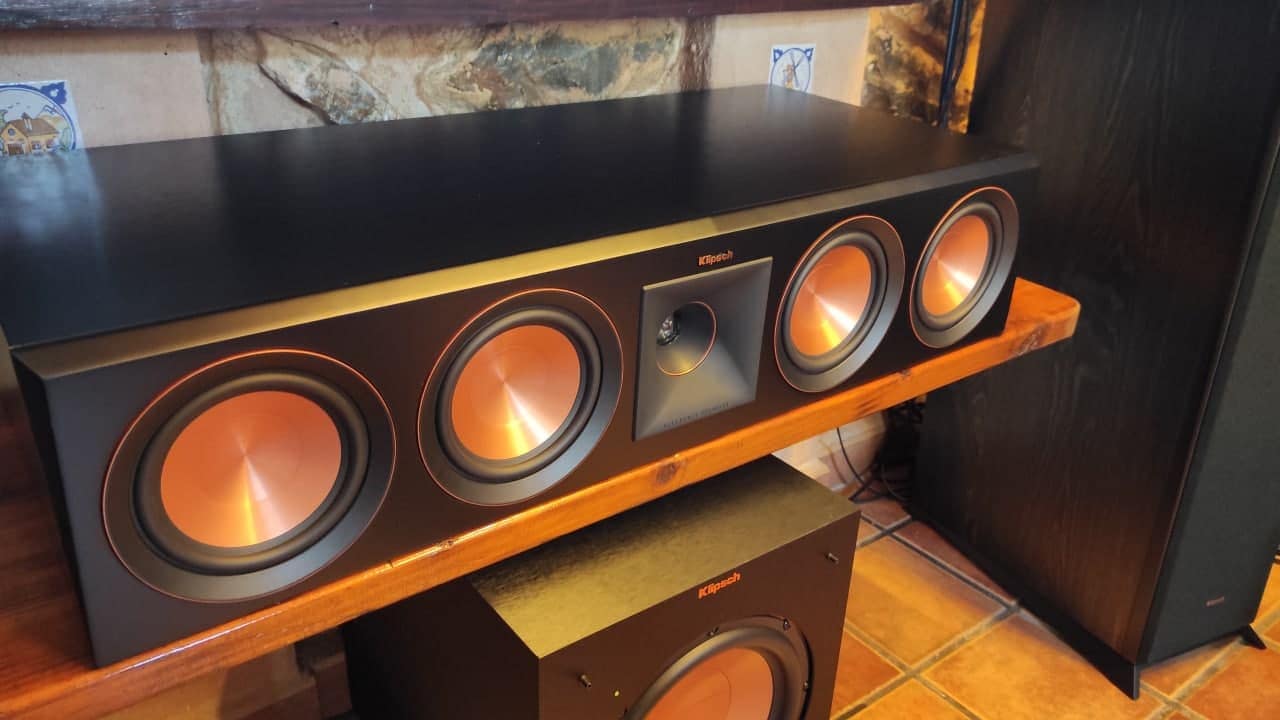 The Klipsch Reference Premiere RP-504C center speaker uses an unusual design, featuring the same hybrid horn LTS titanium tweeter with Tractrix technology with the shock absorber in the center, this unusual center mount mounts four 5.25-inch woofers responsible for the bass and mids made in Cerametallic.

There are two on each side of the tweeter, and Klipsch claims the reason for this configuration is reduce speaker height, which is useful for those trying to place it under the TV. Klipsch also claims that this arrangement results in a radiation area equivalent to the two 6.5-inch drivers that are used in the towers.

The RP-504C also has a rear reflex port, and comes with adhesive rubber feet to prevent vibrations with the stand. The center speaker has a nominal impedance of 8 Ω and the same sensitivity of 97 dB as the front speakers. However, as is often the case with the center speakers, it does not get as low in bass as the towers, which is normal.

The center speaker has the same choice of scratch-resistant ebony or walnut vinyl finishes, along with the same copper rings around the tweeters and woofers, and magnetic black cloth grilles. The most surprising thing about this center is its size: it is huge, reaching 79 cm long and weighing more than 14 kilos.

To finish the set of main speakers used, we have been able to test the fantastic RP-600M as rear speakers. These speakers have the same construction as the front ones, the RP-6000F, as they also use a LTS titanium horn tweeter coupled with 6.5″ woofers (made in the material Cerametallic), so it couldn’t be a better idea to put them to work alongside the RP-6000F. 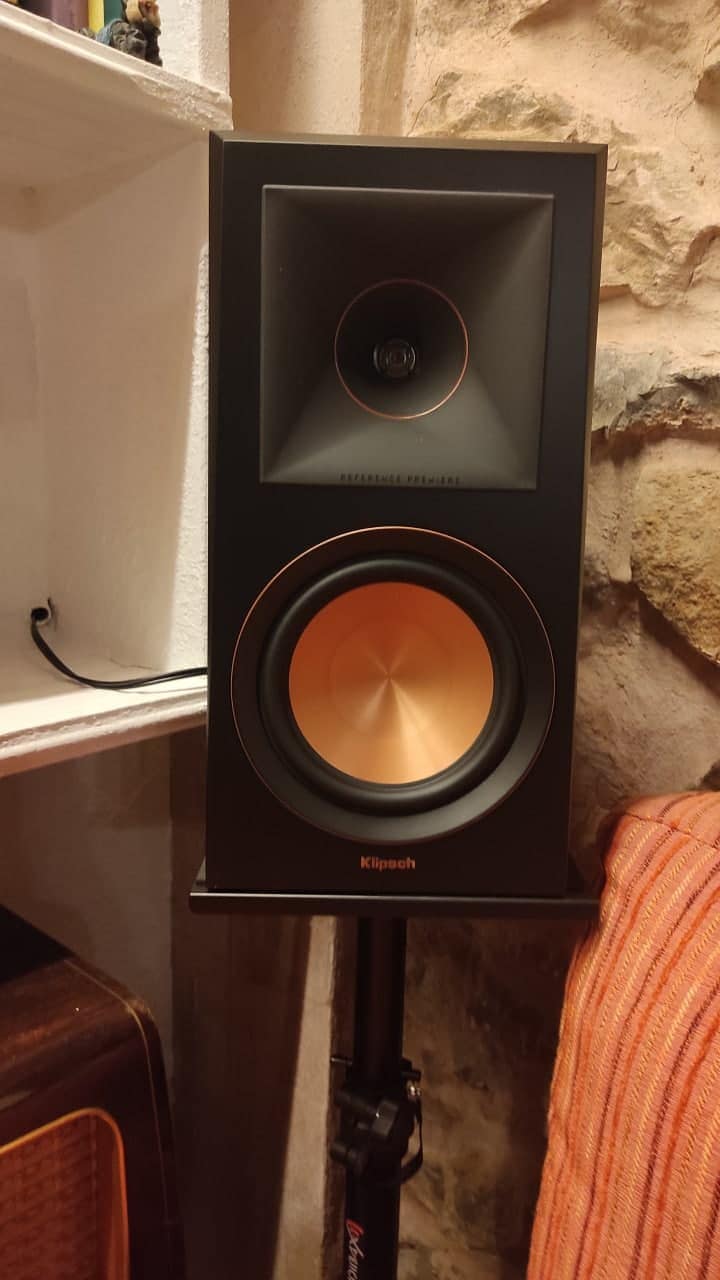 The Klipsch Reference Premiere RP-500A are Atmos speakers that fit like a glove on the front. These are speakers that emit the sound upwards so that, when bouncing, it seems that the sound is coming from the ceiling. Uses the same bass and midrange driver Cerametallic 5.25-inch copper speakers and 1-inch hybrid Tractrix horn tweeter than the rest of the lineup, but also includes Dolby’s proprietary technology, as seen in the fabric of the product itself.

It is also worth noting that the effectiveness of any loudspeaker that emits sound upwards is highly dependent on the ceiling. For the invention to work well, it must be low and reflective, so high, vaulted, or absorbent ceilings should be avoided. In addition, the bass waves will not bounce, but for that we have the subwoofer. 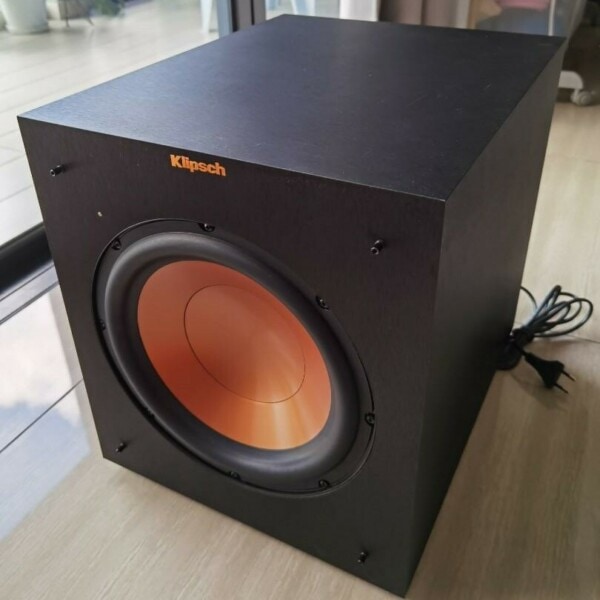 The Klipsch Reference Premiere R-10SW subwoofer completes the system we’ve tested and takes care of the dirty work on the bass side, though this model is the weakest of the set that we have been able to analyze. The subwoofer uses a driver too Cerametallic 10-inch copper speaker that is designed to complement the other speakers and is powered by a 300W Class D amplifier.

The subwoofer, like the rest of the set, It has a rear bass-reflex design with an official 32-125Hz frequency response.. The design is identical to the rest of the system, with its traditional copper-colored driver for the brand.

On the back of the subwoofer we find the connector for the power cable and some basic controls and connections. There’s a stereo phono input that also doubles for the mono LFE input, along with a volume dial, crossover control, and a switch to select the phase control. There is also a port for the optional WA-2 wireless adapter. and a switch for power on, auto standby, and standby. 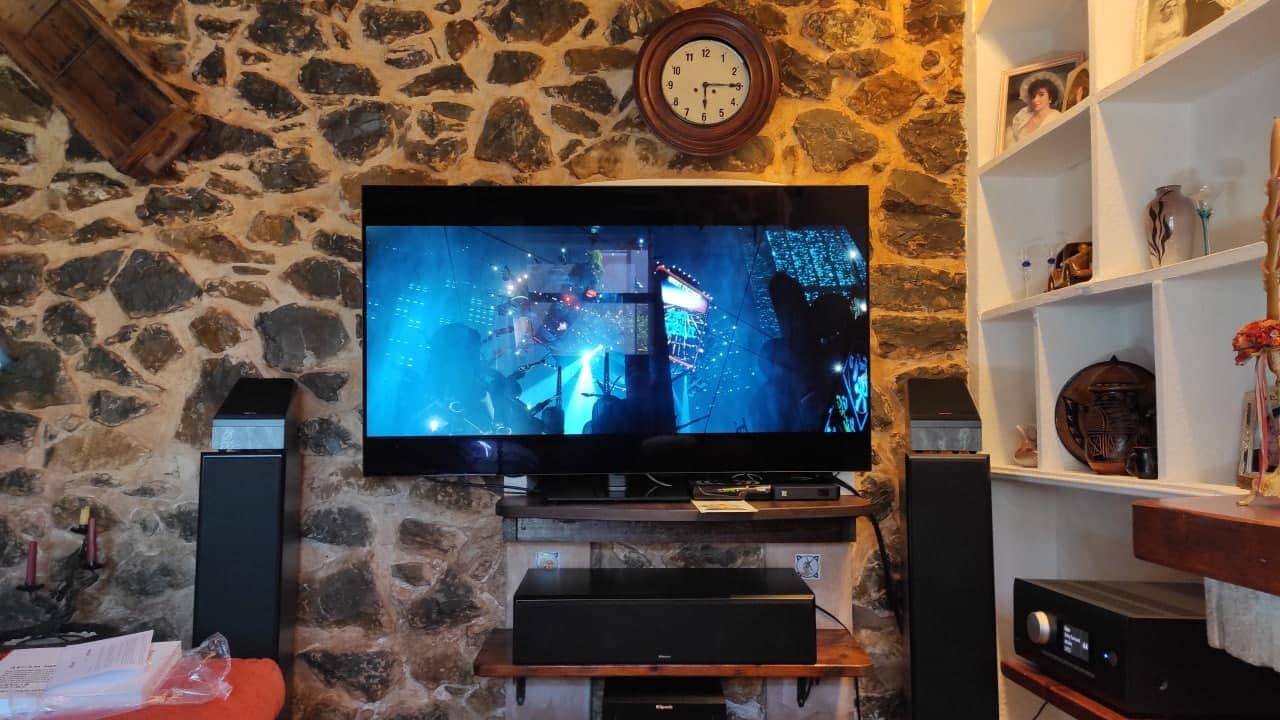 As you will see in the video-analysis, we are faced with a group that sounds phenomenally good as long as we use equalization to control it. As standard, the sound had a huge excess of bass – the result of the rear bass-reflex used in all the speakers – and some recessive means since Klispch is famous for using a V-curve.

After using a curve Harman +6 using Dirac Live (without Bass Control module) on the Arcam AVR10, the sound came to life: the excess bass that obscured the details of the mids and highs was removed. In addition, the mids are now much more present and not “covered” by the Klipsch V-curve, so the voices are the great beneficiaries of the equalization.

To test the set we have used several pieces of Dunes (2021)with a bestial but very controlled bass presence and with a huge body in the voices, thanks to the four drivers of the RP-504C, the best of the tested set. We continue with Captain America: Civil Warin the battle scene in Germany, where we saw that the RP-6000F are great headlampsin addition to the great immersion achieved by the RP-500M as rear.

The weakest of the team, the RP-500SA (probably because of the vaulted ceiling) and the subwooferwhich is somewhat lame and in our opinion we would have opted for at least the model with the 12-inch driver. Still the set is outstanding and the cinema experience is a real wonder.

Great quality price of the set

The RP-504C is a true beast of a headunit

Not available in white

Ten African countries with the potential to export Spanish technology

four new cars are coming to the game