The KROM Kayros has analog sticks and vibrating buttons to feel every press. You can choose the level of vibration by pressing the Turbo button and the + and – buttons on the remote itself, and they can also be configured independently on its four main buttons. Similarly, the auto-fire function is configurable and can be selected between 5, 12 and 20 pulses per second, something that can be very useful in shooting games.

Finally, it should be noted that KROM includes a support to be able to anchor the smartphone to the controller itself and thus have greater comfort when using these devices to play.

This is the KROM Kayros

The KROM Kayros comes packed in a soft cardboard box with the usual black and orange colors used by this brand. On the front we can see a full color image of the remote accompanied by the brand, model and compatibility list, while on the back we have a sketch of the functions of the remote. 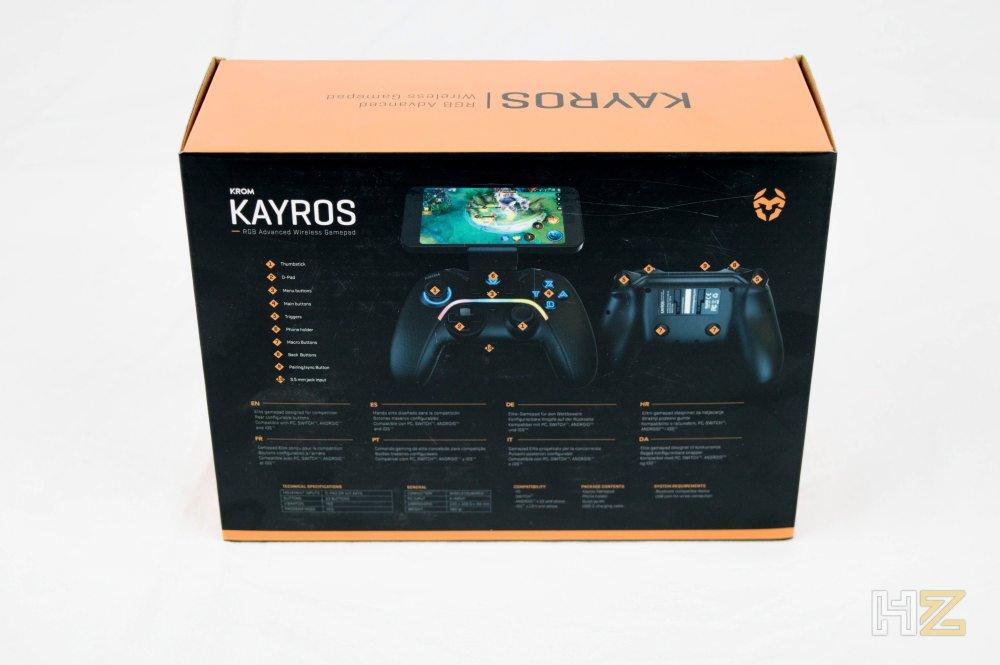 On both sides of the box we come across its main summary features. 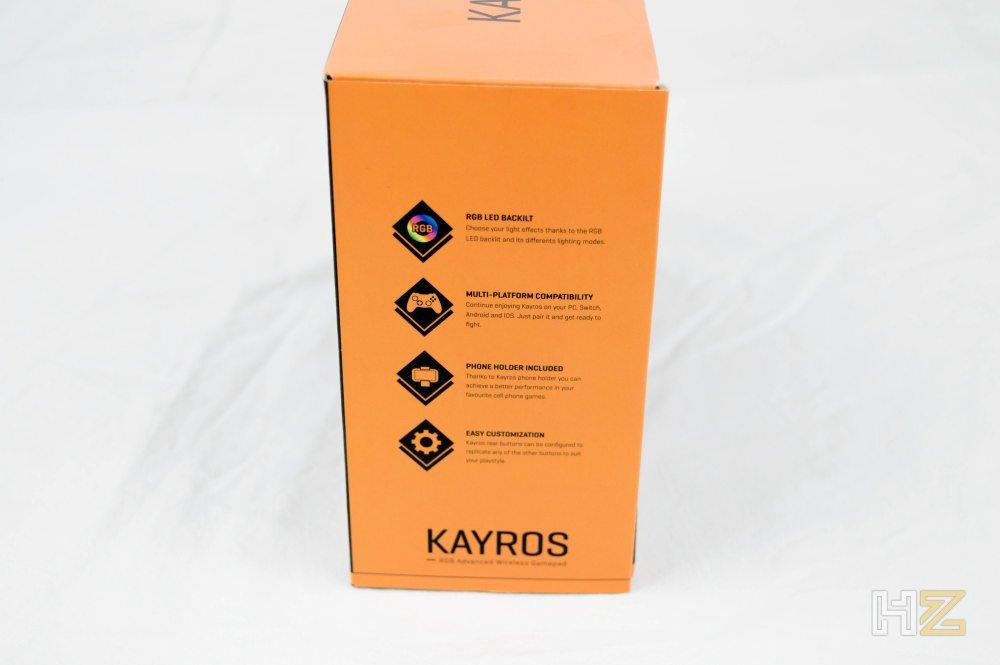 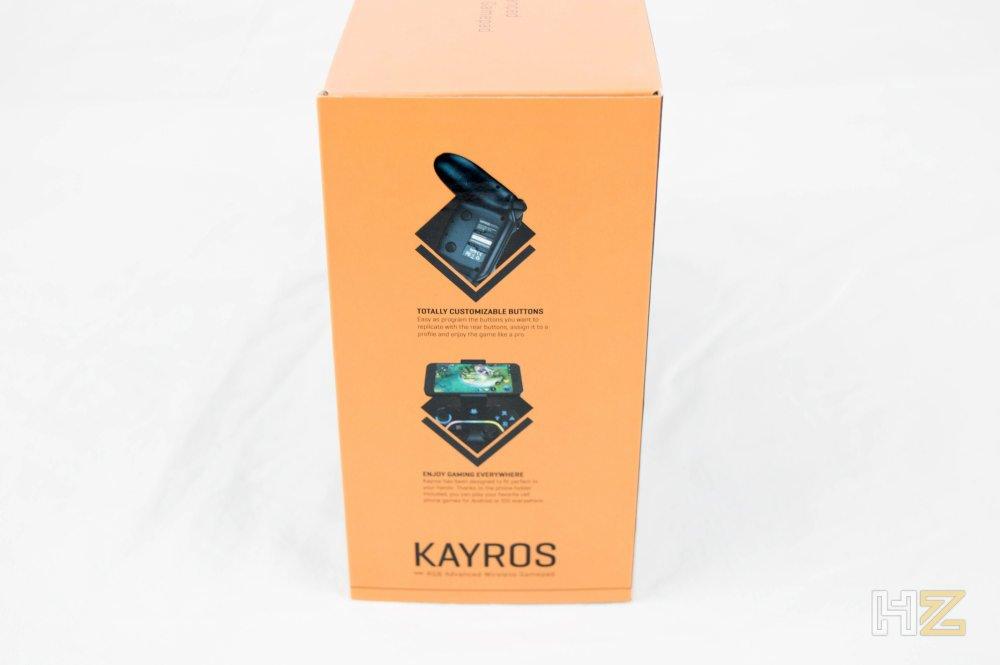 The box opens in the shape of a chest, and inside we find the controller embedded in a plastic structure, as well as its support for smartphones. 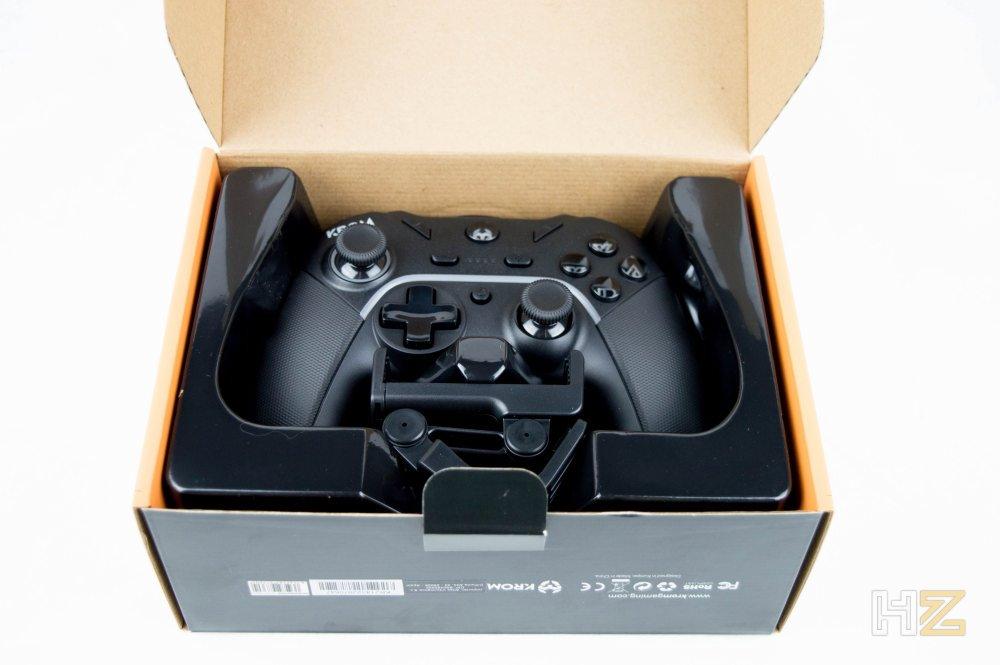 Under this plastic, we have an information brochure, the instruction manual in several languages ​​and the charging and USB connection cable. 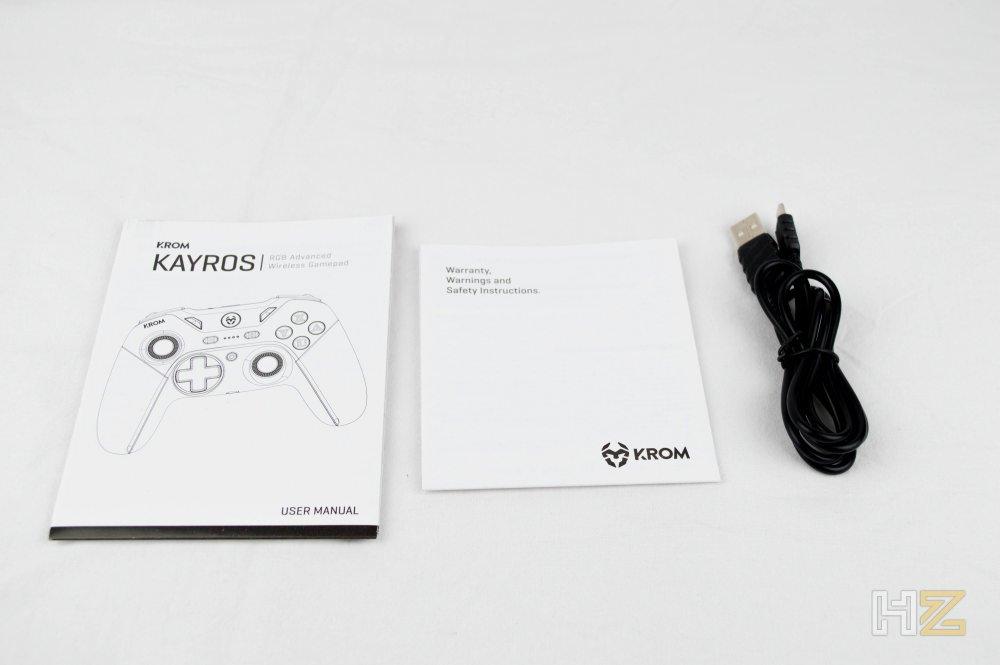 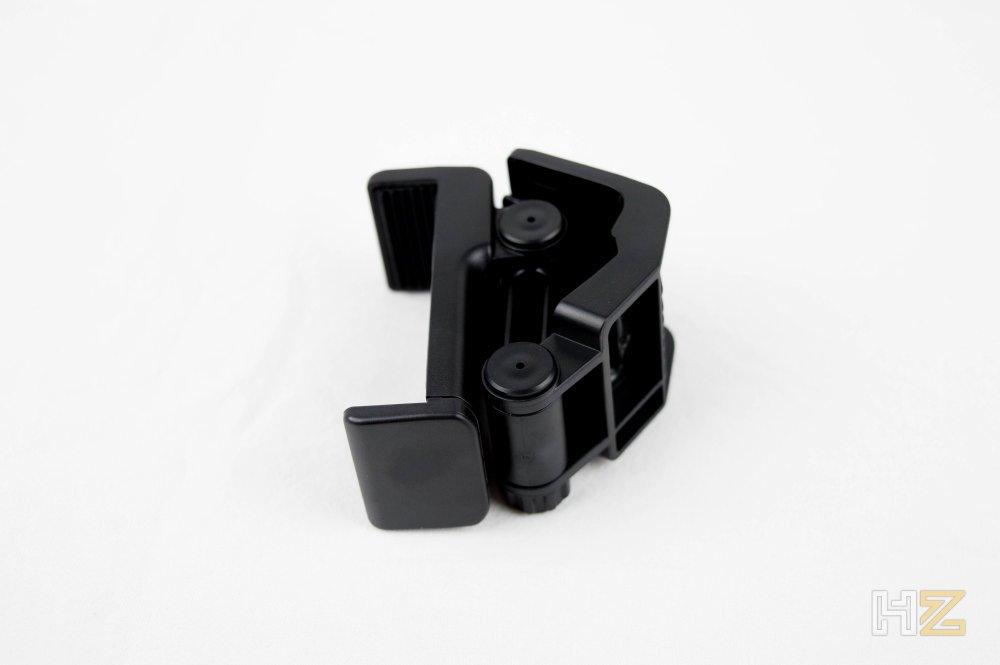 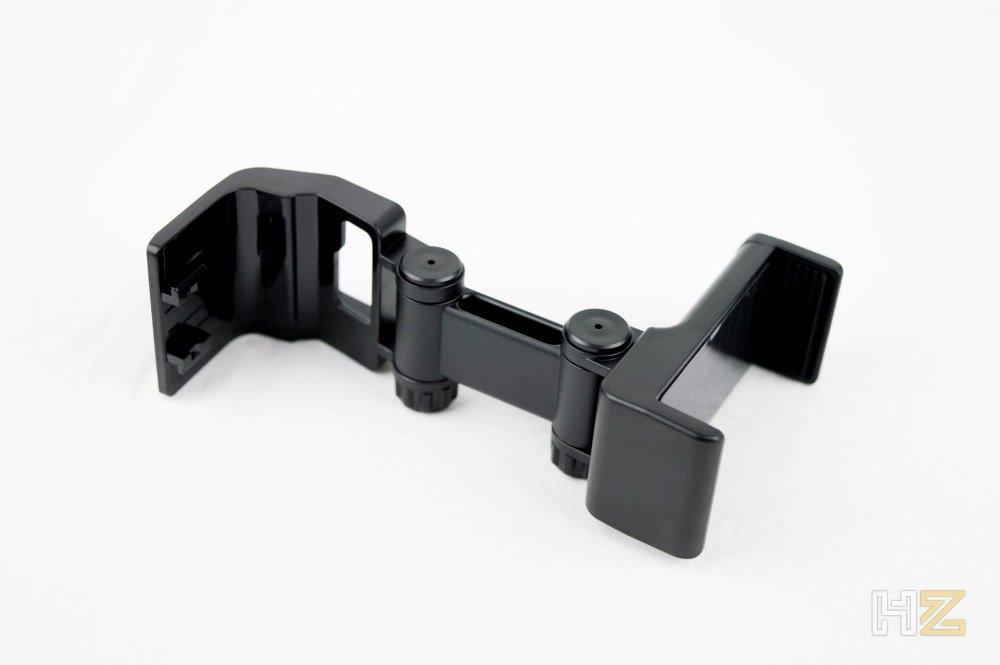 Here we already have the KROM Kayros which, as you can see, has an asymmetrical design similar to that of the Xbox controller. The sides are rubberized to improve grip and both joystick covers are knurled for the same purpose. As you can see, in the center it has several extra buttons: the round one in the center with the KROM logo is the on and off button, while on the left and right it has select and start buttons. Below this, the plus and minus buttons and in the center the Turbo button. 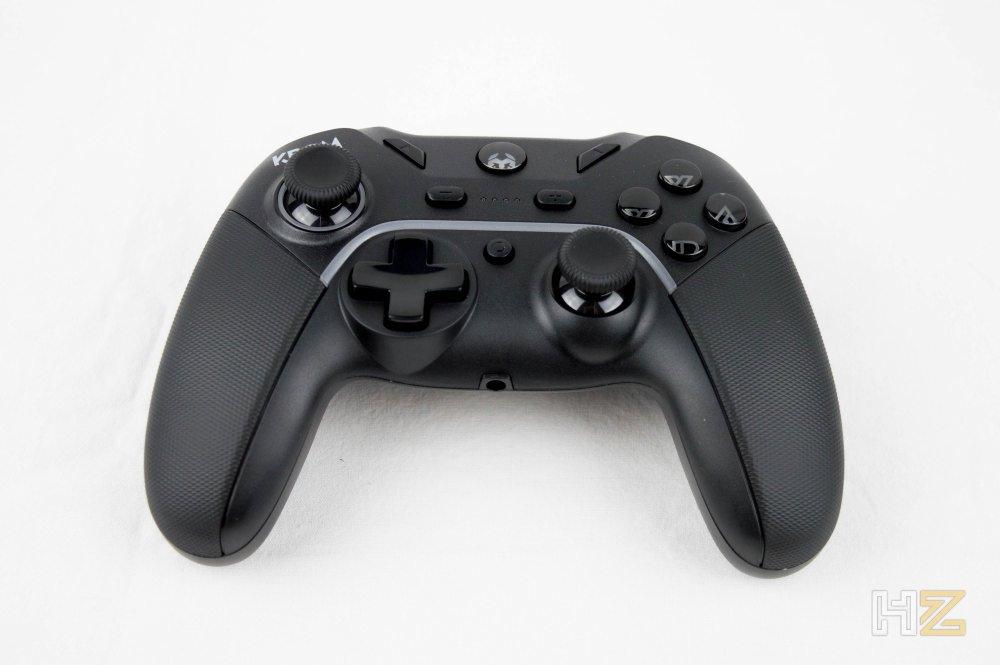 The main buttons (YXAB) have a very particular typography that, aesthetically, we quite like. Plus, it’s sunken under the button cover to stand out more once the illumination turns on. 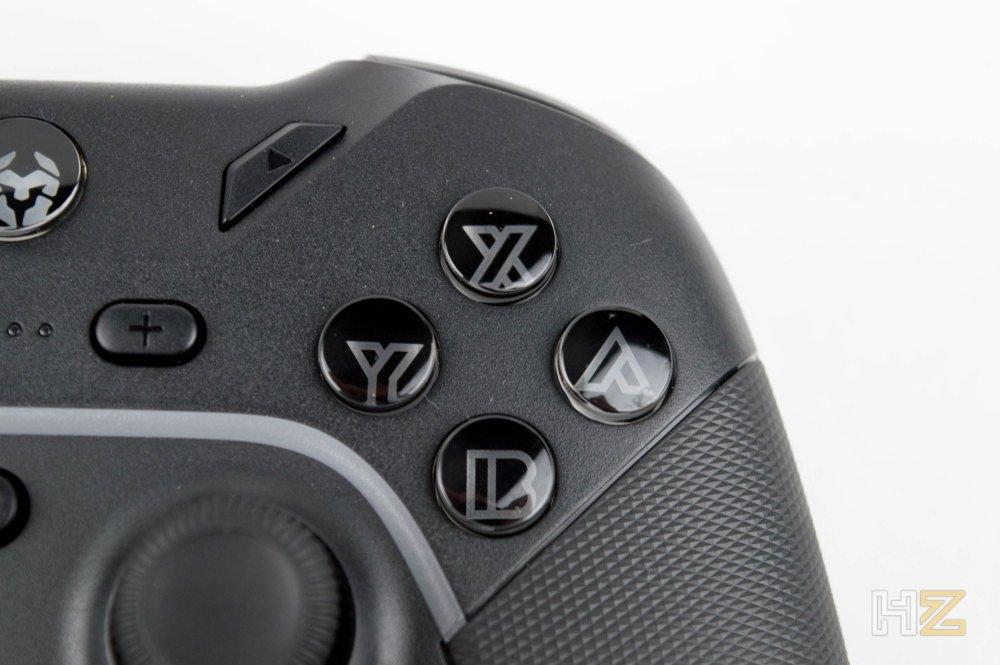 In the lower area we find a 3.5 mm minijack connector to be able to connect analog headphones. 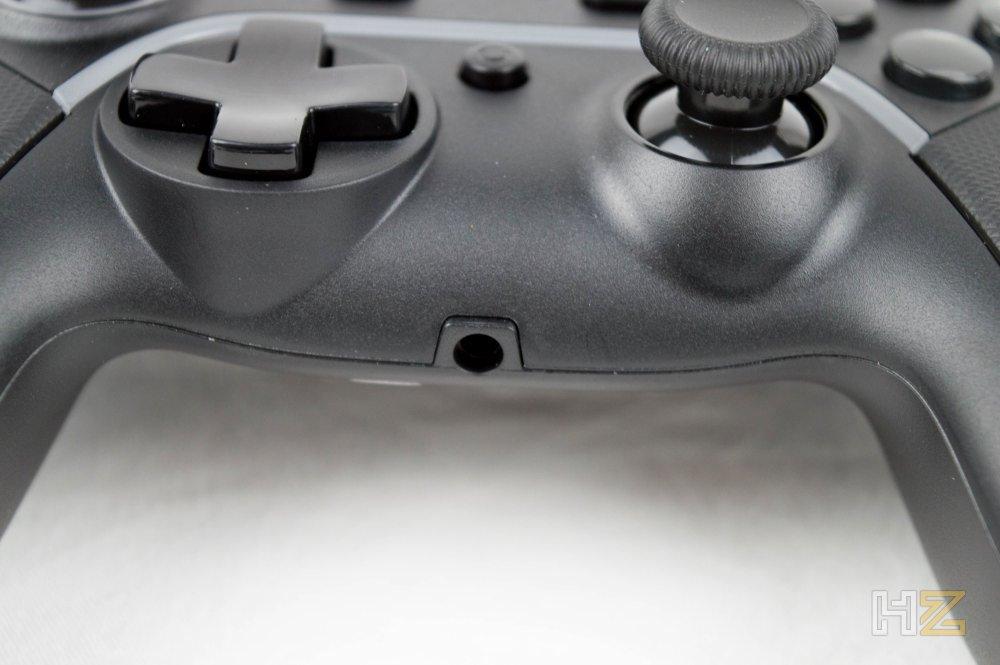 In the upper area we have the usual triggers, as well as the USB-C power connector and the wireless synchronization button. 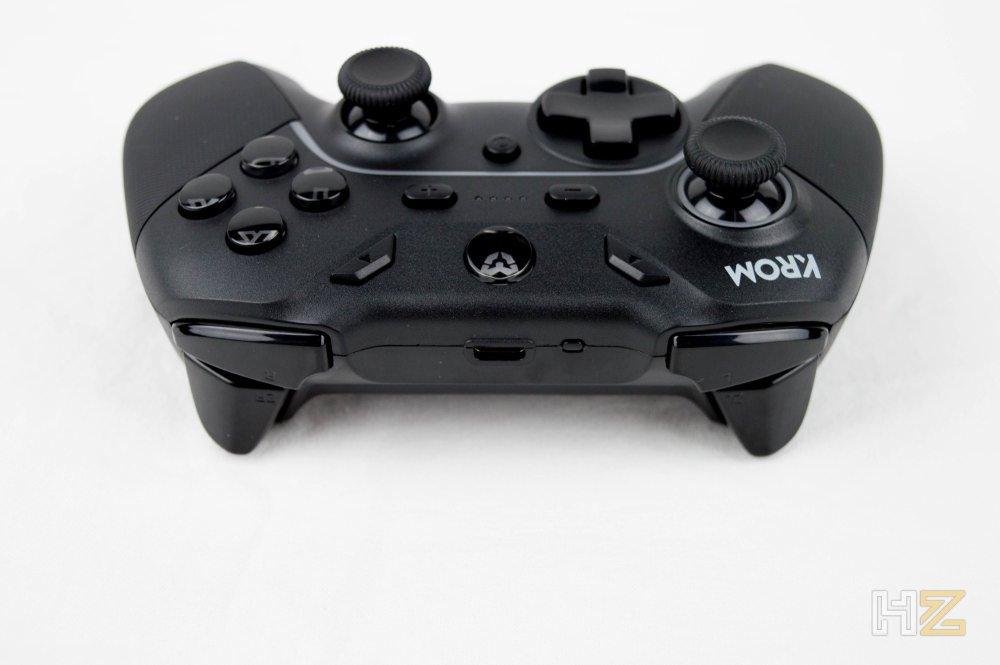 Underneath, we have two additional configurable buttons, which we really wish were more levers than buttons but oh well. The anchor for the smartphone holder is also here.

Anchoring the support is as simple as inserting it into the hole and pushing it down, thus being well fixed (in fact, it is quite difficult to remove it later). 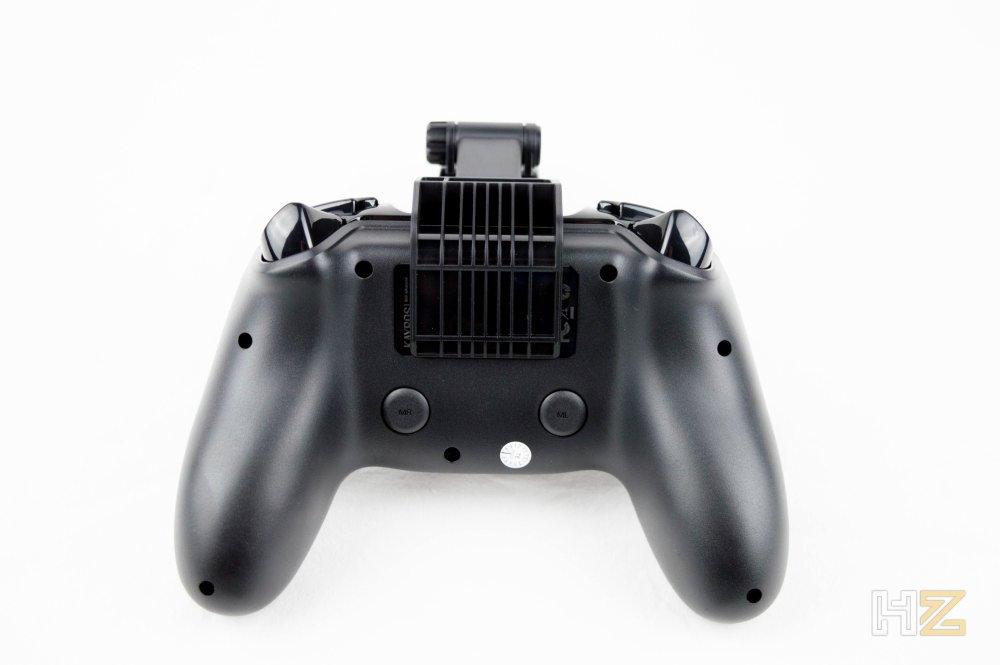 Once this is done, we can now place our smartphone by opening the extendable support and placing it as we want thanks to the articulated “arm”. 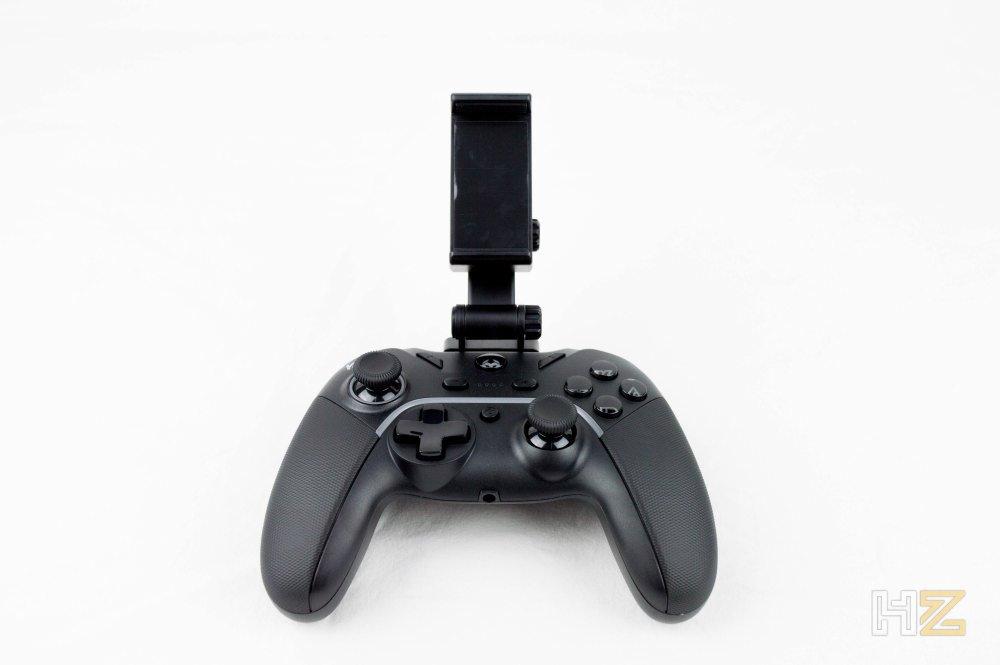 Here we have to review a negative point, and that is that despite the fact that by size it fits perfectly, the support is not capable of adequately supporting the weight of an iPhone 11 with its case, and we have to place it high enough so that it does not fall down. weight back. 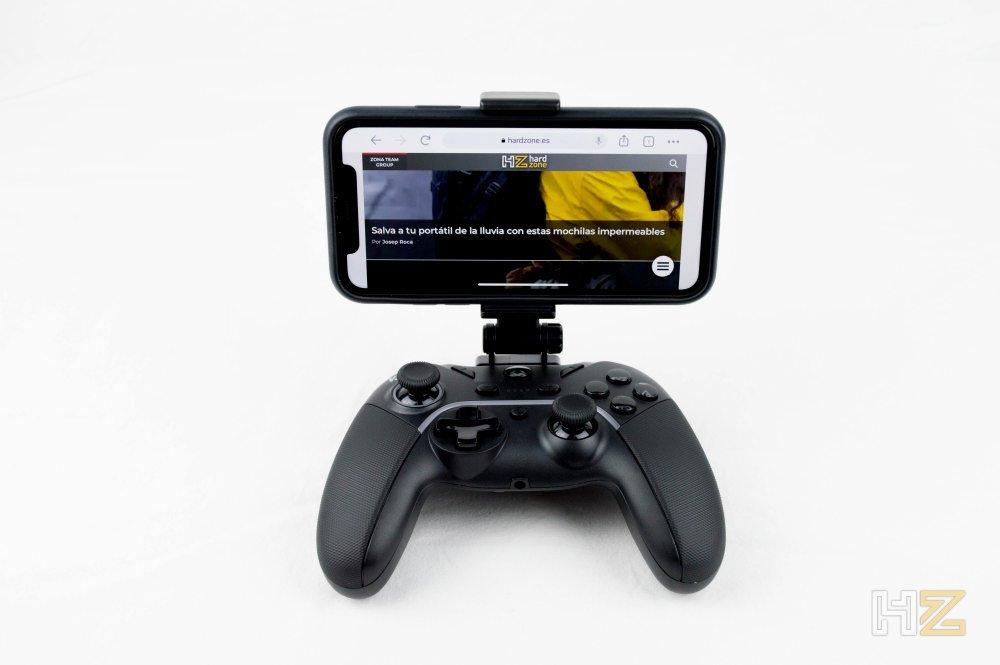 Having seen the command, the time has come to test it to see how it works.

A curious thing is that the remote will turn on not only when you press the central button, but also any of the main buttons. By doing so, the lighting will automatically turn on, which we can control by pressing combinations of buttons; for example, to turn it on and off you have to press R1 + L1 for 5 seconds, or to change the intensity you have to press SET + D-Pad left or right. 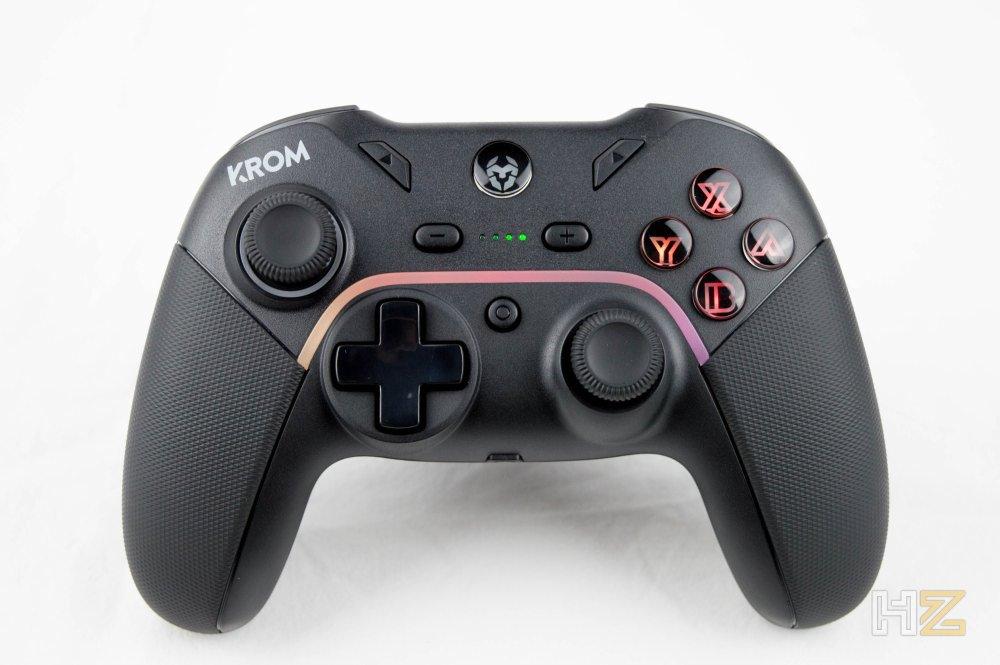 The controller has two lighting areas: the decorative LED bar, which we can configure with SET and the plus and minus buttons, and the left joystick area, the Home button and the four main buttons, which are controlled with SET + D-Pad up and down. 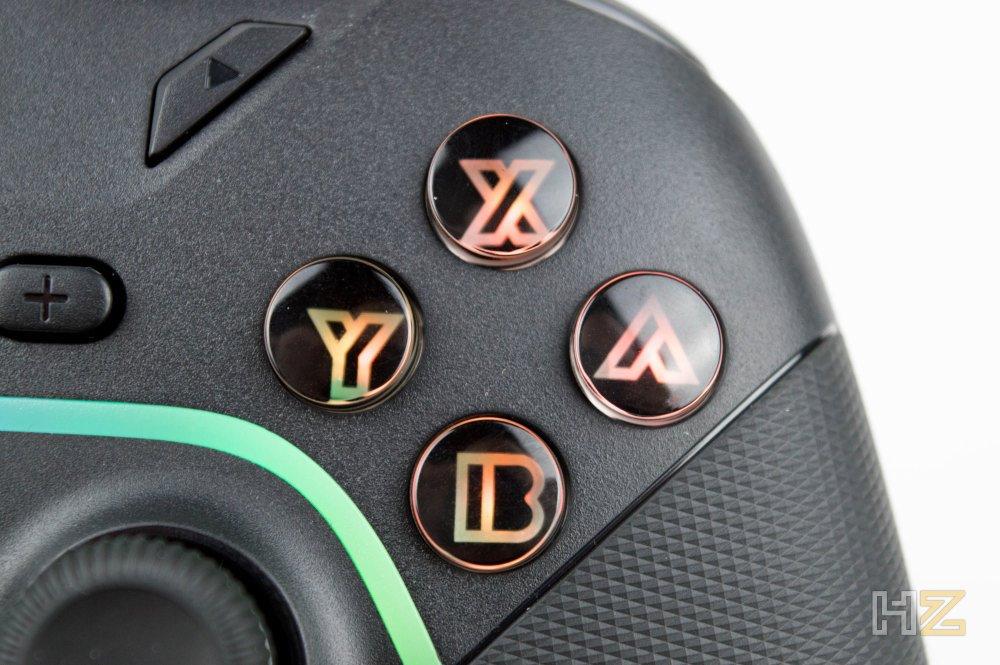 This command does not have a configuration software, so unfortunately we will have to configure everything using key combinations like these that we have told you about. 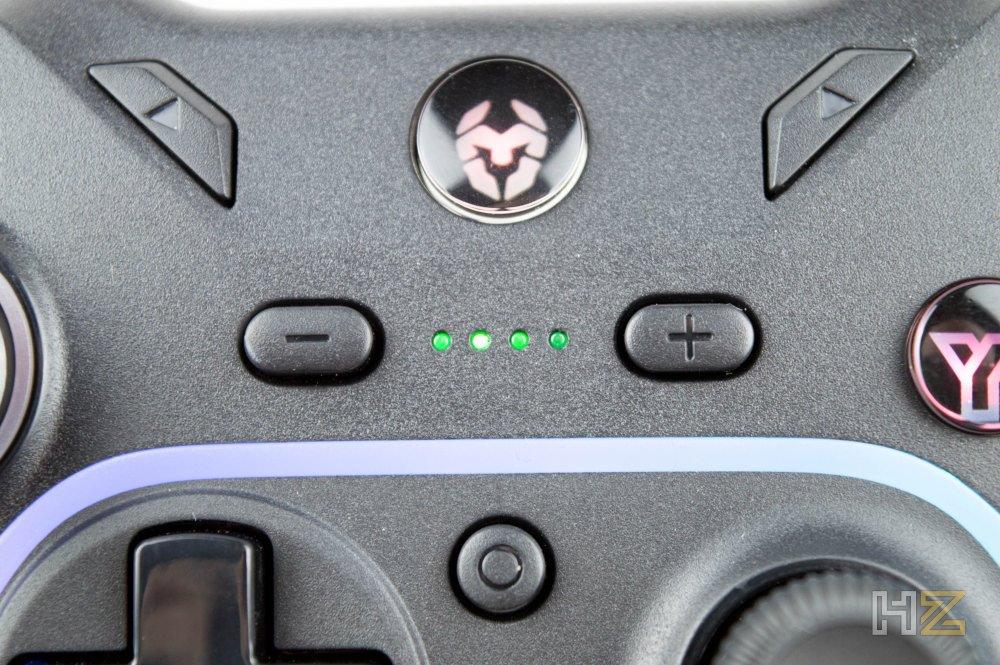 For example, to set the vibration levels you have to press and hold the Turbo button and then press the plus and minus buttons. To configure the macros of the rear buttons, you have to press and hold these buttons for 5 seconds and then press any sequence with the other buttons, to finish by pressing the button again and thus save the macro in memory.

As for Turbo mode and Auto shot, they can also be set and turned on/off; for example, to activate the Auto-Fire mode you have to press the Turbo button and hold it down while pressing any other button, such as ABXY or L1/R1.

By the way, the lighting of the KROM Kayros looks really good even in bright conditions, but it is in dim light that it looks spectacular. 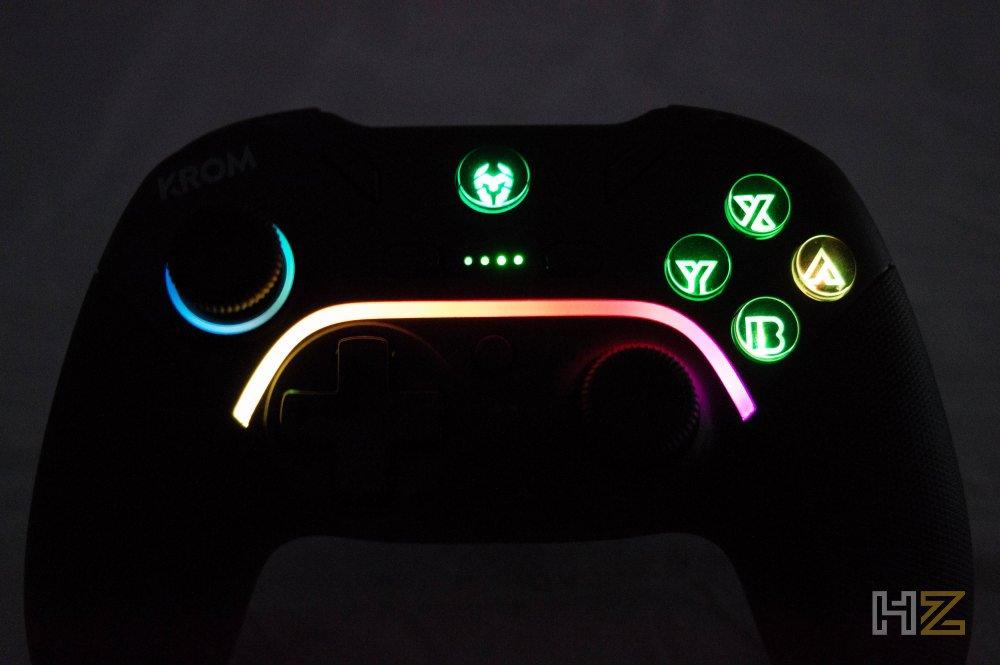 In use, the controller feels quite comfortable in the hands, even if you are a user with large hands as I am. This is a matter of personal taste, but I have always felt much more comfortable with the Xbox controller than with the PlayStation, and since this Kayros has a similar design to the first one, it has been very comfortable for me from the first moment.

Now, I have to say that although the back buttons can be pressed with some comfort, it would have been more comfortable if they had been levers like the ones on the Xbox Elite controller, for example, but you can’t have everything in a controller. 40 euros, right?

The main buttons have a very good press feel and it doesn’t take much effort to press them repeatedly; also, with the vibration function, you have a tactile feedback when you press them, although I have to warn that this may not be to everyone’s taste (however, it can be disabled, so no problem). The joystics move easily and gracefully and are very comfortable and precise when moving, denoting a very good build quality from KROM. As for the D-Pad, I personally don’t use it much, but it works fine for me, and I like that the actuation is “dry” and not “spongy” like PS4 controllers do over time.

We have tested the KROM Kayros both with a smartphone and on a PC (via cable in this case), as well as on a PlayStation 4 Pro which, although the manufacturer does not mention it, works perfectly via Bluetooth. The sensations playing all kinds of games with this controller have been excellent, although we must also warn you that in the case of mobile games, they have to be compatible with a Bluetooth controller or the controls will be quite erratic otherwise.

We have been saying for some time that KROM has greatly improved the quality of its devices, and this Kaylos is proof of that, and not only because of the quality of materials and construction, which is close to excellent, but also because of the performance of the device, which during our tests it has been fast, solid, and comfortable. In addition, thanks to its asymmetrical design, it seems to us to be a really comfortable hand to use for hours and hours without getting tired. 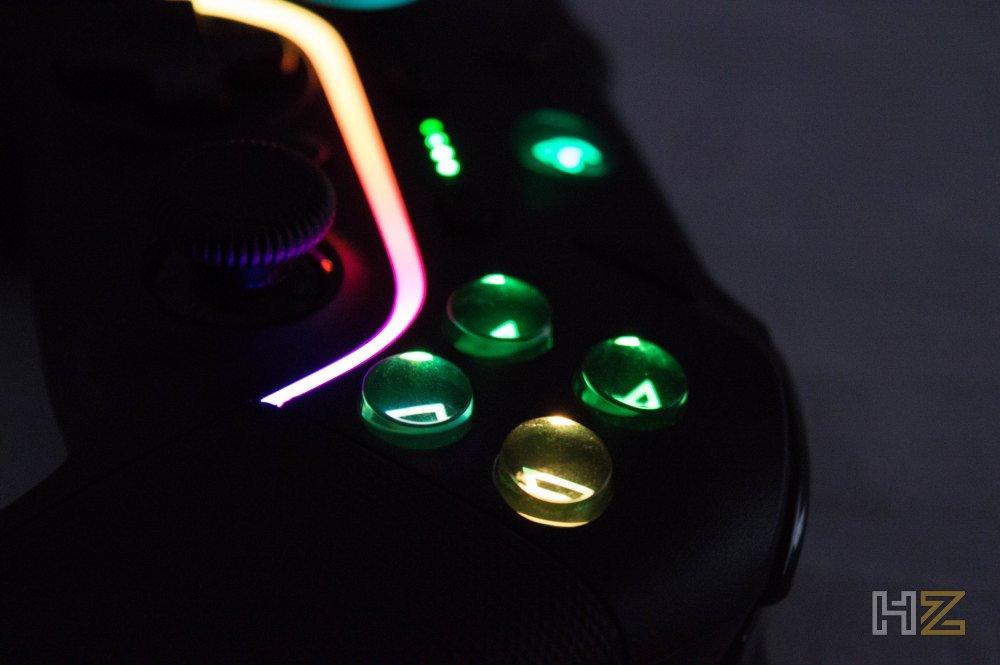 We only found two drawbacks to this command, and the first one is rather our perception: it may be a bit difficult to configure it to your liking, all with shortcuts and with the instruction manual in hand, but once configured everything is save and you won’t have to do it anymore. The next drawback is something that has to do with the manufacturer, and that is that the support for smartphones is a little weak and can barely handle the weight of an iPhone 11, which is not exactly one of the heaviest terminals.

All in all, we think that this is an excellent controller to use on PC, consoles and smartphones, and we believe that it deserves our Gold award, as well as our recommendation for its quality / price ratio. 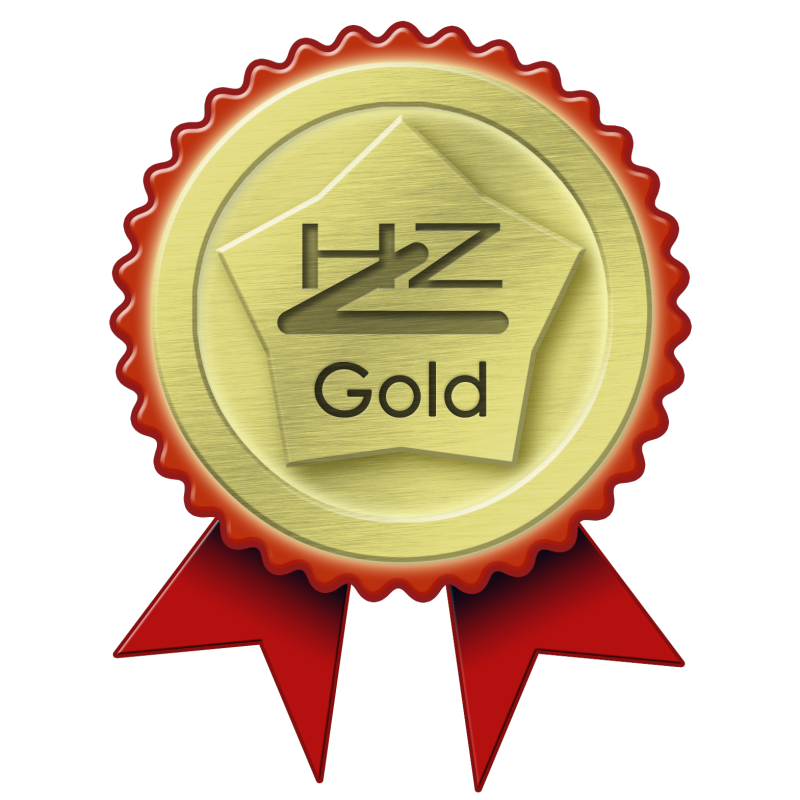 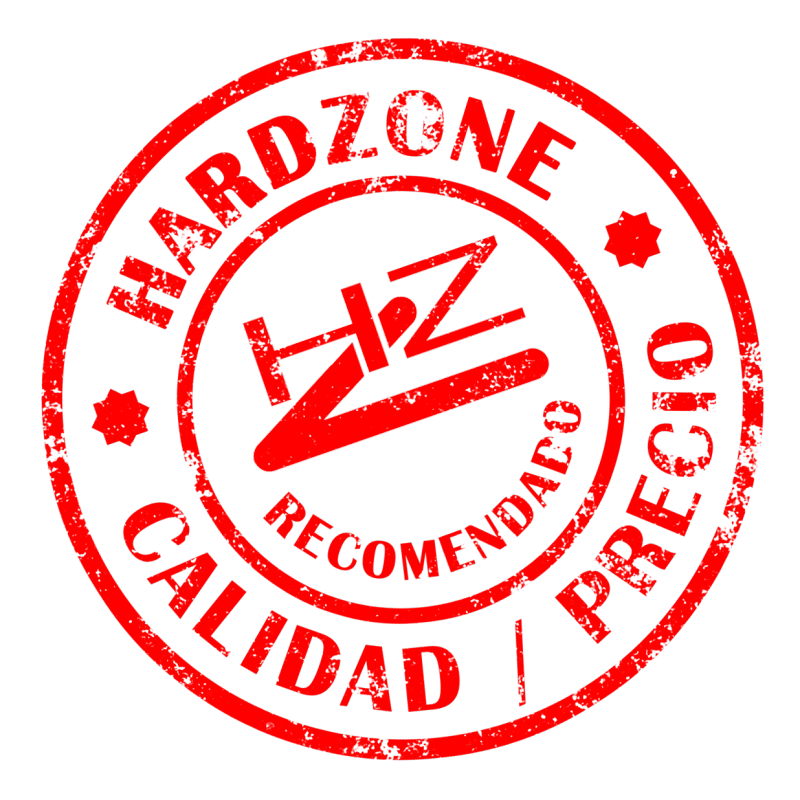 Draw freehand on your Word documents with these features 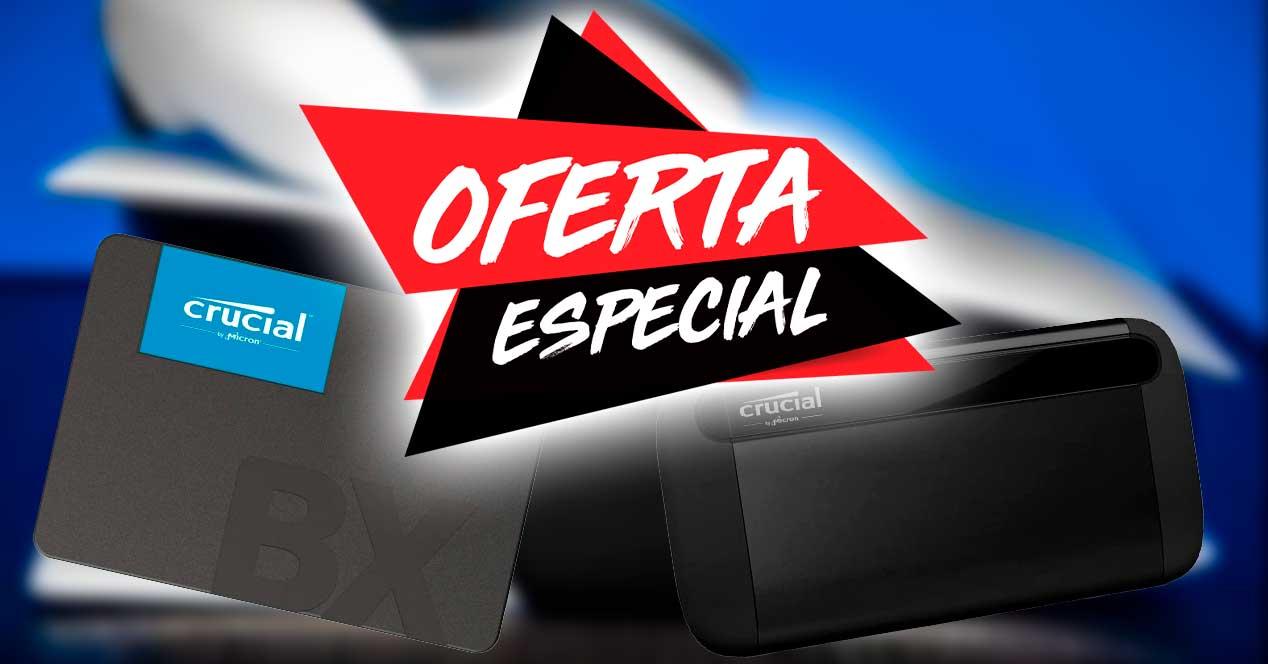 these SSD hard drives knock down their price 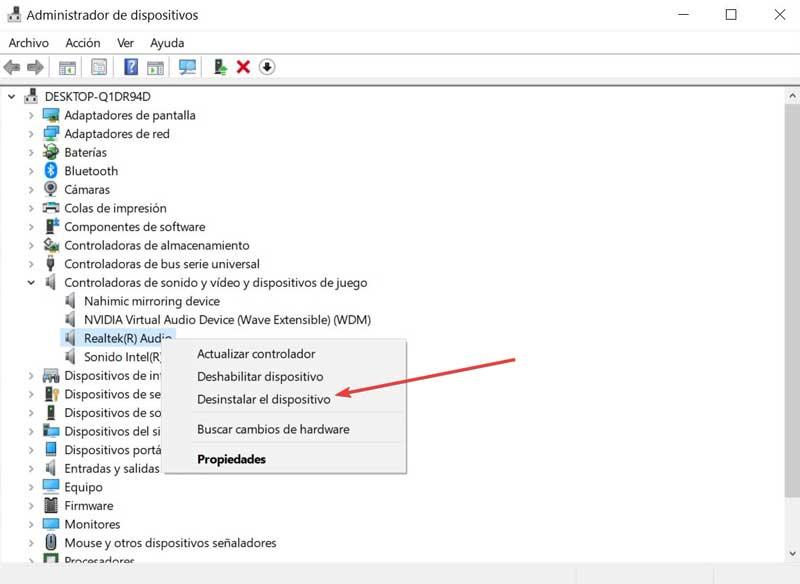